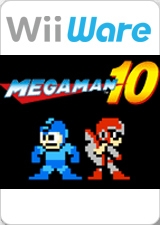 It has been almost two years since Capcom revitalized the original Mega Man series with Mega Man 9. Back then the goals were clear. Capcom wanted the project to feel authentically retro and contain the high difficulty that remains a hallmark of the original series: they succeeded. Now with the newest sequel, Mega Man 10, the goal is to take all the magic from the predecessor and ratchet up to (ahem!) 10. And for a second time, Capcom finds success.

Mega Man 10 completely looks like the Mega Man games as run on the Nintendo Entertainment System hardware. Meaning everything looks like it’s from the 8-bit glory days. The title has a measly 48 color palette, low resolution sprites, and the makers even took time to make the game look like the resolution was running at the NES 256 x 224. This could irritate the more graphic conscious of us out there, but it should be noted that the art direction is geared toward invoking the 8-bit era and not reaching new benchmarks. I know some would like me to say there is some graphical prowess that this game possesses that was impossible on the NES, but it doesn’t exist. What I can say however, is this is how retro gaming should be done, as the animation and look of the game feels exactly like it did two decades ago; and I can remember those times.

The story is just as retro as the graphics. Mega Man finds himself venturing out to destroy various robot masters in order to cure a Roboenza epidemic. Eventually, this will lead Mega Man to an epic confrontation against the evil Dr. Wily (no spoiler alert needed, right?). The story is narrated by static 8-Bit paintings that fade in and out with on-screen dialogue. There isn’t much animation, but those who remember the 80’s already know this to be necessary to Capcom’s desires. Other cutscenes are created using the in-game sprites and standard backgrounds. Overall, the story is functional, but it is pretty campy even for a Mega Man game.

The music in this game is exquisite. It carries the 8-bit mantle perfectly. Each stage has an up-beat heroic tone. Nitro Man’s stage in particular will stir you into action with its musical score. The music is also used to assist with the narration of the story during cutscenes. The sound effects are all unchanged from the previous nine titles in the series. All the sounds come together to form an exciting yet completely familiar experience.

Of course the main attraction to a Mega Man game is the gameplay. Mega Man 10 continues with the rejuvenation project that Mega Man 9 pioneered. Everything is polished and well designed, but it does suffer from slight attrition. This is not unusual for a tenth sequel, but in this case it seems odd that some mechanics from previous games are again not included. I am in no way saying the gameplay is stale, but it is disappointing to see no techniques and abilities added.

Mega Man can jump and shoot as normal, but like Mega Man 9 he cannot slide or charge his M Buster. The levels are designed with these limitations in mind, but still designed to be very difficult. There are also plenty of obstacles and hazards in each level to make traversing them challenging. Every jump is accurate, and you can navigate pits sure footed with the exception of the nefarious traps that are designed to murder you. The game was developed by Inti Creates, the same people who made the Zero and ZX series. That experience was utilized to make Mega Man 10 one of the hardest and best controlled titles in the series.

But have no fear less hardcore players. This time around an Easy Mode was added at the behest of those who complained about Mega Man 9’s difficulty. Easy Mode places platforms over spike traps and pits. It also lowers the enemy count and they shoot at a slower rate. The Robot Masters are also much easier since they move slower and take more damage. Really, Easy Mode is kind of embarrassing and should be reserved for those who are rusty or simply terrible at side scrollers.

To balance the Easy Mode, Inti Creates added an unlockable Hard Mode. This mode is a straight up crucible; it’s a blast. Enemies are placed more frequently and in a manner intended to transform every move and jump into a death trap. The bosses and enemies require more hits to defeat and Mega Man takes more damage per hit. This mode should be reserved only for seasoned players and those who handle stress very well.

Capcom did make sure that the value of this $10 USD downloadable game was increased. Leaderboards and Challenges make a return and extend the game well past the 5 hours it takes to complete the Story Mode. This time around Protoman is included standard free of charge. He does sport an expanded move set that includes sliding and charging. Even with these new moves he is balanced well with Mega Man and adds a whole new layer to both the Story Mode and Challenges. Unfortunately, he is incompatible with the Leaderboards.

Like Mega Man 9, this game will be supported by DLC well beyond the launch date. New Challenges and characters have already become available and they add so many reasons to go back and visit the game multiple times. The difficulty is high and it encourages plenty of wasted hours to achieve ultimate victory. It also has some nice allusions to prior games, which includes (but is not limited to) the revival of past Robot Masters both in the Story Mode and Challenges. The only downside is that some DLC can be pricey. Some add-ons run up to $3 USD for a new character or Challenge. For a starting price of $10 USD Mega Man 10 packs in plenty of value, but the DLC add-on, while great, can become very expensive.

Inti-Create and Capcom have been making Mega Man games together for almost a decade now. Their previous projects may have a higher difficulty and more advanced gameplay, but this return to roots project is a welcomed addition to all Side-Scrolling Action fans. The game mechanics are classic and simple; a winning combination that will never go out of style.