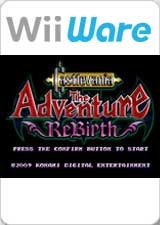 Is this the best game in the Konami's Rebirth series?

Konami continues to successfully deliver new installments of their Rebirth series with Castlevania the Adventure Rebirth for the WiiWare. Although the new episode still shares the old ‘Castlevania Adventure’ moto from the 1989 Gameboy release, it’s really a new game of the ‘Vampire Hunter’ saga, and it returns to the gameplay roots it enjoyed during the golden age of the NES and SNES where the main focus was on the action while exploration took a back seat. The game is so thoroughly inspired by the old classics that it in fact ends up adding very few novel elements into the mix.

Castlevania the Adventure Rebirth is intentionally a simple game, designed to reflect all the elements that characterized Castlevania in its heyday. That is the starting premise to keep in mind as we start our quest with Christopher Belmont to hunt down Dracula while traversing a series of locations filled with hellish creatures that complicate your journey. The story now tells us about how Count Dracula builds a castle in the Transylvanian suburbs, an atypical plot that will require us to traverse six very well differentiated locations. We never backtrack through the same scenarios or waste time sorting through objects placed in our path to bluntly delay or complicate progression.

Regarding options, the game let’s you choose between Normal and Classic Modes. The main difference between both modes regards what you can do while airborne. In Normal Mode you can perform some maneuvers and affect direction while up in the air, whereas in Classic Mode you are more realistically constrained, just as in the first games of the saga.

Furthermore, the game presents three levels of difficulty that affect the number of foes on screen and the degree of damage that they can take before dropping for good. The game is compatible with almost any controller you can come up with, since it can function with the new Wii remote and Nunchuck, Wii Classic Controller, and even the old GameCube controls. The buttons can also be reconfigured to your liking, thus granting you an enviable level of freedom in this department.

As mentioned, the game gambles fully on the action aspect, going from point A to B while defeating enemies and sorting obstacles. There are many paths you can follow, but you can only accede to them if you possess the key that opens the door to the path. These keys are hidden throughout the scenarios and, once found, to carry them you will have to lose your sub-weapon (knife, axe, holy water, time stopper, and crucifix). At the end of each scenario you will stumble against the final bosses (another franchise trademark) that cap off the closing of each of the game’s six scenarios. However, we get to fight one of their close accomplices, a semi-boss so to say, halfway through each level as well. In case any of these battles go wrong we don’t have to worry about having to repeat the whole adventure thanks to the presence of special checkpoints where the game saves. The game, however, lacks save points or save passwords, probably as part of the creators’ attempt to preserve the spirit of the first games in the series.

The graphics aspect of the game is a mixture that combines the traditional looks of the franchise and a more modern graphic style. This tandem of highly pixilated and very colorful environs filled with luminous effects produces the sensation of playing the game from twenty years ago with a little bit of superficial makeup. The scenarios are varied and full of life, going from cemeteries and caves to forests and tower interiors. The animation of the characters is solid and fluid and the bosses are gigantic and swift moving. The game runs in 4:3, as a classic game, but you can go to the options menu and stretch it to fit a widescreen TV without losing image quality - a nice option that other games should have.

For practical purposes, Castlevania the Adventure Rebirth remains a traditional Castlevania game. If the graphic engine doesn’t differ much from what we came to appreciate from the 16Bit age, neither does the musical score. You'll stumble into the same classic tunes from the old games, adding to the sense of nostalgia. All these musical scores from past games are masterfully executed, by the way.

The game is actually quite difficult throughout its duration, and there is some replay value because there is always the possibility of returning to check for any undiscovered paths or treasures we may have missed the first time. Repeating the game a second time only has value from a personal standpoint, because a second completion won’t award you any new missions, items, or game modes. The adventure ends in some 3 hours, although it can be completed even faster by diehard veterans of the series.

Castlevania the Adventure Rebirth is doubtless the best delivery so far of the Rebirth series from Konami; being a traditional 2D game filled with brightness and nostalgia. If you’re also one of those gamers that are just dying for a ration of old school videogames, one of those gamers that associate Castlevania with hours on end of fun and treasure hunts, then for a mere 1000 Nintendo points you can have an adventure you simply can’t allow to ignore. In fact, even if you are not familiar with this vampire hunter saga, then this is just about the perfect game to become acquainted with the tricks of the trade for properly neutralizing Dracula.