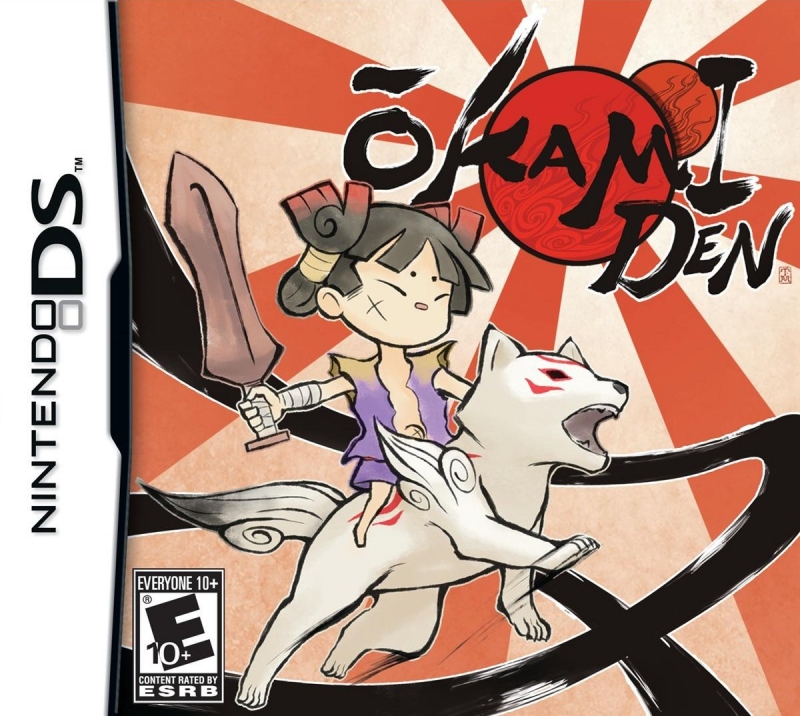 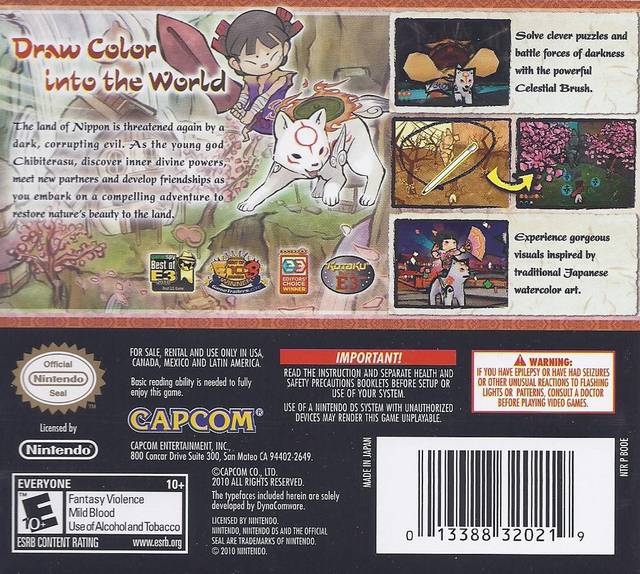 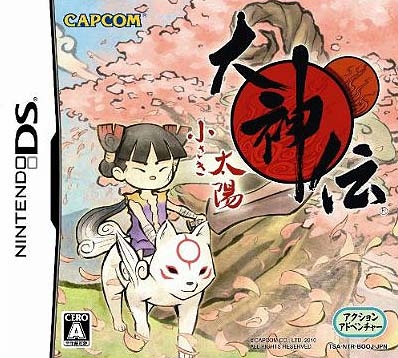 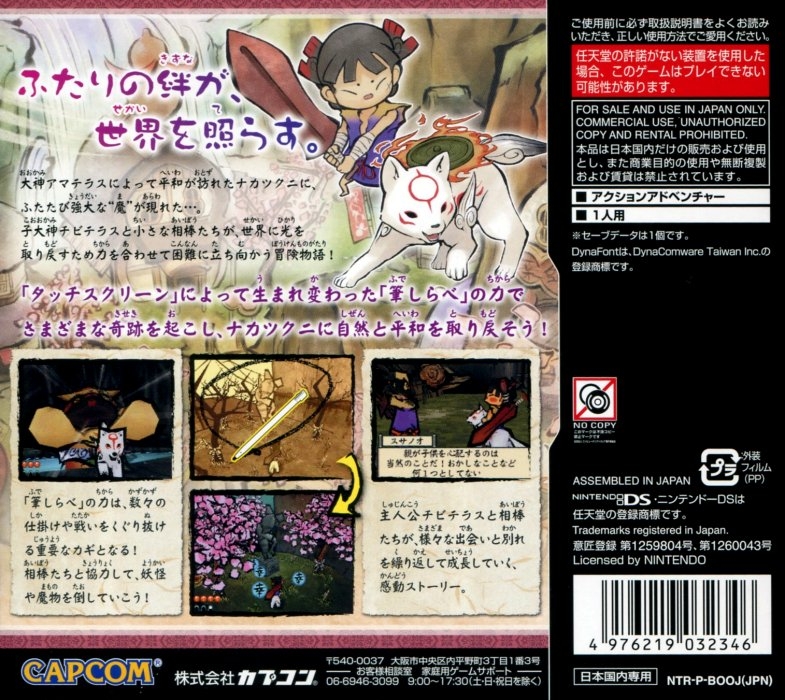 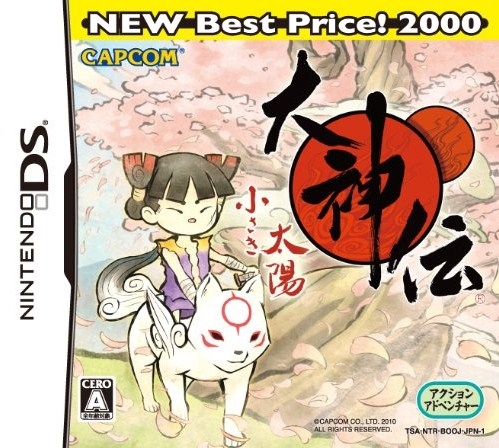 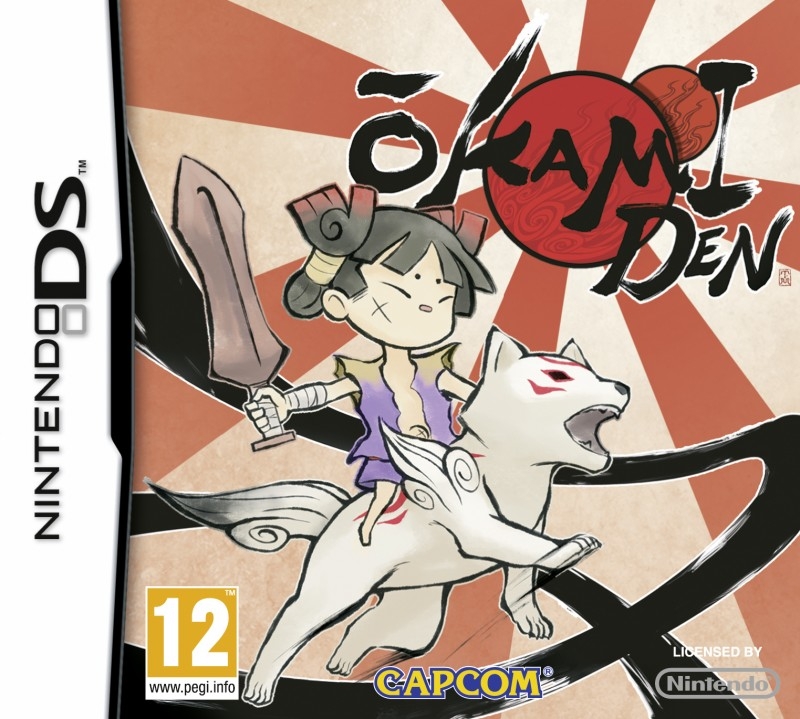 When the original Okami first launched back in 2006 for the Playstation 2 it instantly hit the status of cult classic. Wii gamers begged Capcom to port the game over to Nintendo’s motion controlled console, and again the game performed well, but no one really thought that Capcom was planning on turning Okami into a full blown series, especially after the disbanding of the original developers, Clover Studios. Well apparently, Capcom has big plans for the wolf goddess and her friends as Okamidenhas arrived for the Nintendo DS to continue the story on from the original. Does this latest entry catapult the Okami name to heavenly status, or is this portable sequel just a painting gone wrong?

Like the original Okami, Okamiden is a third person action/adventure game, similar in style to games in the Legend Of Zelda series. You take control of Chibiterasu, the offspring of Okami’s protagonist, Amaterasu, and a wolf-cub who can wield the power of the celestial brush like his mother before him. Along the way you will meet partners (most of whom are the children from Okami). These characters can also be controlled similar to how Link and Zelda teamed up in The Legend Of Zelda: Spirit Tracks. This new feature is mostly used in solving puzzles and allowing Chibi and his partner to continue moving forward on their quest, but also in the combat sections, where partners will lend their abilities to help win the day. Speaking of puzzles, Okamiden is absolutely brimming with head-scratchers of many shapes and sizes. Now while this would be a good thing in most games, in Okamiden it quickly becomes apparent that most puzzles have very similar solutions, making what should be an integral and special part of the experience feel recycled and dare I even say, tedious. The game does shake this up with boss battles that will challenge you not only in difficulty but in actually finding ways to expose their weaknesses and defeating them. In many ways the bosses are actually better puzzles than the puzzles themselves. This brings up another point, which is the difficulty. Since the game gives you the most useful powers right from the get go and Chibi only gets more powerful as the game goes on, you never really feel challenged, save for the above-mentioned boss battles.

While Okami never suffered from control issues on the PS2 and Wii, it’s immediately clear that the Nintendo DS, with its touch screen and stylus is the perfect system to house the series (and I’m sure the 3DS would do a great job too, hint, hint Capcom). Wielding the celestial brush is easy as ever and simply requires you to draw the pattern on the touch-screen. The only concession the developers had to make when bringing the game to the DS is in regard to the camera which now controls itself. While this doesn’t hinder the gameplay in any way, it does make the game feel slightly, and only slightly, more restrictive than the original. Bringing a game like Okami to the Nintendo DS is no simple task. Okami’s art style was both beautiful and vibrant, and included details which, seemingly, only consoles or high-powered handhelds like the PSP and 3DS could pull off, not the (supposedly underpowered) Nintendo DS. Well, the developers at Capcom answered this challenge with stunning results, asOkamiden is one of the most stunning and beautiful games ever to grace two screens. The art style flows gorgeously, with vibrant environments rich both in style and detail. When I first laid eyes on the game, I couldn’t believe that it was a DS game. The only draw back is an occasional framerate stutter. There is no denying that Okamiden is the best looking DS game ever.

The sounds and music are also beautiful, lending themselves to the art style perfectly. The music is sweeping, romantic, and subtle, yet epic at the same time, making its presence known during the more tense moments. Like the original the characters all speak in ‘garble’ talk, which for reasons I can’t quite explain is becoming more and more popular in games. This doesn’t detract from the experience at all, but can wear on more easily annoyed gamers' nerves. You know who you are. While it lasts, Okamiden clearly stands out as one of the best action/adventure games to be released for the Nintendo DS. I say ‘while it lasts’ because like the ‘Zelda’ games that it shares so much with, once you finish Okamiden there isn’t much reason to re-visit it other than to go through the main quest all over again. That being said, the amount of side-quests and exploration found in the game are on par with comparable adventure games and you will tons of distractions from the main story on your way through.

In many ways, Okamiden reflects its hero perfectly. A smaller, less stoic and more innocent but just as epic, heroic and engaging experience than what came before it. Okamiden is the perfect swan song for the Nintendo DS system, a game that pushes not only  what the system can do on a technical level but manages to deliver the same degree of attachment that players felt with the original. So before you all jump over to the shiny new Nintendo 3DS, give the original dual-screen one last send off with one of the best games ever to grace its double display. Okamiden is truly a brilliant work of art.