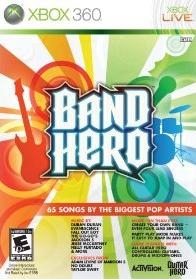 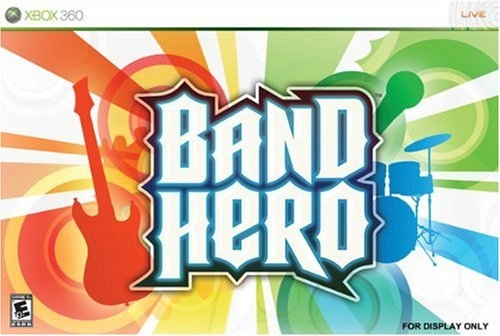 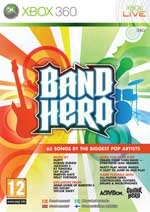 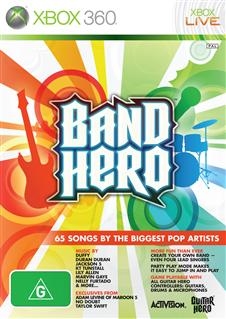 In the unending battle of the rhythm games, a frequent opinion against Neversoft and Activision’s venerable Guitar Hero franchise is an unpopular set list. The answer to this arrives with Band Hero, a Guitar Hero 5 port that looks more like American Idol or Dick Clark’s American Bandstand than anything vaguely hard rock or metal. Gone are the skulls and hard-rock horns, replaced by bright blues, purples, and emo versions of the Guitar Hero character lineup.

Band Hero doesn’t bring any new features to the table that weren’t introduced in Guitar Hero 5. That’s not necessarily a bad thing; GH5 brought many improvements and innovations to the genre. Party mode allows players to jump in and out of an unending playlist without penalty. Band Hero also has GH5’s freedom to play a quartet of any instrument combination and same highway interface. The improved star power and vocal scoring mechanics from Guitar Hero 5 are maintained here along with many staples of the series such as GH Studio, character creator, and multiple online modes.

Like Guitar Hero 5, Activision gives you the ability to import both DLC and on-disc tracks into Band Hero. The DLC importer is a simple download that gives you access to your DLC library, while the disc importer requires a nominal fee and imports tracks from Guitar Hero: World Tour, Guitar Hero: Smash Hits, or Guitar Hero 5. Importing my Death Magnetic tracks into Band Hero proved the difficulty was not missing from this game, but the game is easier simply because the tracks are not as difficult as such finger-blisterers as Through the Fire and the Flames or Hot for Teacher.

Online, however, is one place where Band Hero falls flat. This is no fault of Activision’s, but a complete lack of online rockers. I was playing on the Playstation 3, which always has ample players online for Guitar Hero: Metallica and Guitar Hero: World Tour. No matter what game mode, instrument, or difficulty settings I chose, no players were found online. Investigating some online trophy boosting forums led to the same complaints from many players. While all of Guitar Hero’s online play is available, the only way you’ll play an online tune is if you already have a friend with Band Hero.

Personally, I’m a metal and rock fan who prefers blistering my fingers, breaking my drumsticks, and wearing out my vocal chords on Guitar Hero: Metallica. So when I unlocked the set list that featured Wannabe by the Spice Girls, I thought someone had kicked me in the groin and I had landed back in high school. However, if you’re more the fan of Top 40 sounds like 3 Doors Down, Maroon 5, and particularly Taylor Swift, then Band Hero is more your bag.

This will be good news for many gamers and particularly families with smaller children. The target demographic for Band Hero is much broader than that of previous Guitar Hero installments. While Activision has always censored for language, Band Hero censors for content as well. The finale song, American Pie by Don McLean, has the good old boys drinking nothing with their rye instead of whiskey. Honky Tonk Women by The Rolling Stones is the most censored track in the game, leaving players wondering what, exactly, the Stones did with all these women. Some content that takes more poetic dissection does remain, but the most obvious questionable content is gone, a bonus for parents looking to jam with their children.

The biggest blow against Band Hero is the diminished track list for the same price as other games. While 85 tracks has become the standard for both Guitar Hero and Rock Band games, Band Hero features only 65 tracks, a 24% decrease with the same $59.99 price tag. Maybe all these Top 40 tracks cost more for licensing or perhaps Taylor Swift appearing in three tracks had the same cost as 20 tracks would have. Either way, the decrease makes Band Hero an improbable purchase for any hardcore music game players.

The only other real change from Guitar Hero 5 is the trophy/achievement list. While previous music game trophies have been a challenging laundry list of accomplishments spanning both individual and group achievements, Band Hero’s achievements focus merely on completion and chance. A large chunk of the list is taken up by ‘Secret Notes’, which are specific notes that have to be played in specific songs, all of which are easily accomplished with the use of beginner vocals and a table fan. You’ll find no outlandish score challenges or Expert+ requirements here.

Overall, Band Hero brings everything you’ve grown to love about Guitar Hero games. Challenging gameplay, superb sound quality from master recordings, celebrity motion capture, and unmatched multiplayer fun are all present here. If Hinder’s Lips of an Angel is the hardest you rock and Aly & AJ’s Like Whoa gets you singing in the car, then Band Hero is a great game, albeit overpriced.