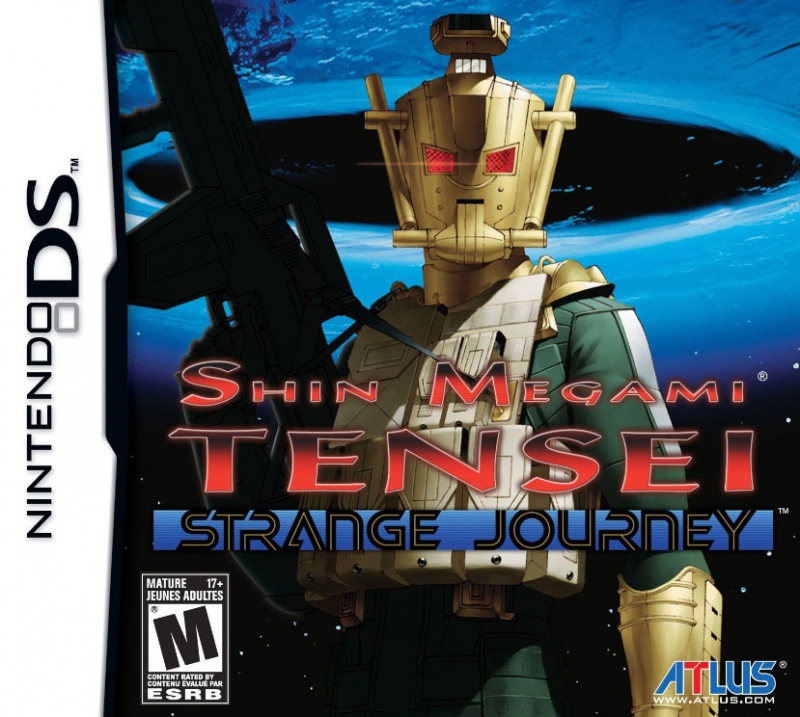 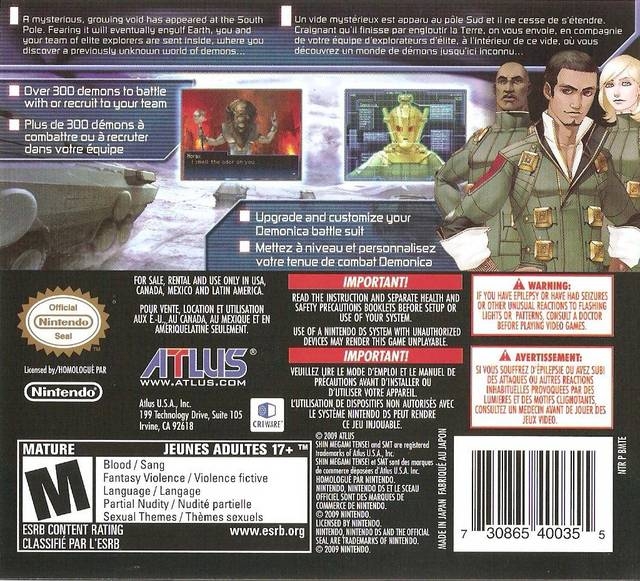 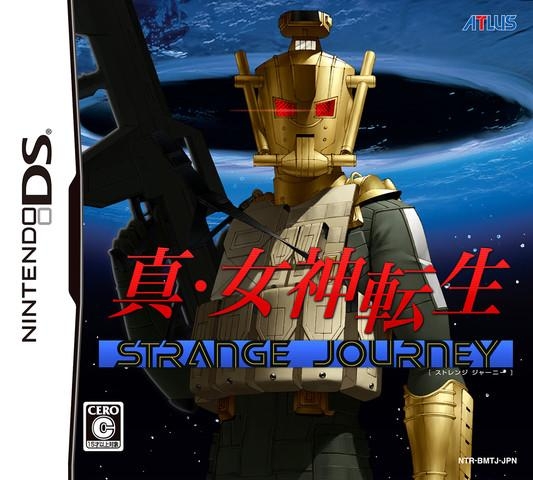 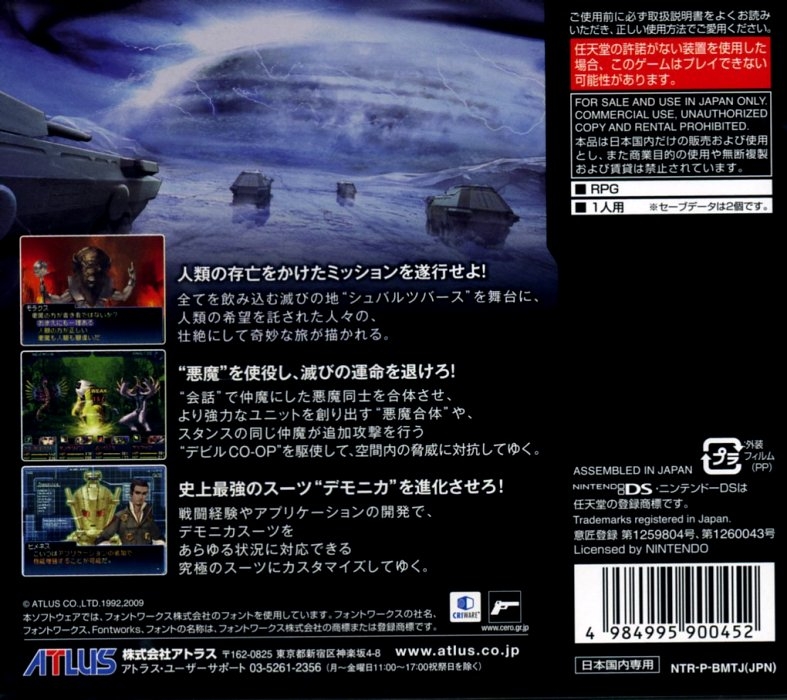 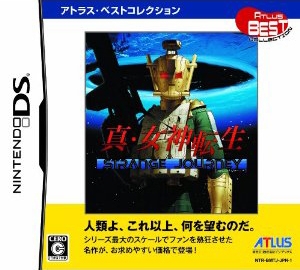 How did Atlus get it to fit?

It was just last year when the Shin Megami Tensei (MegaTen) series made its debut on the Nintendo DS with the spin-off title Devil Survivor - one of the best RPGs I’ve played on the handheld. Just a year after Devil Survivor’s release, Atlus brings us Strange Journey, a game that revisits the series’ first-person dungeon-crawling roots. Is Strange Journey another solid addition to the MegaTen series?

A strange phenomenon, dubbed the Schwartzwelt, has appeared in Antarctica. It’s engulfing the area surrounding it and continues to grow, thus threatening all life on Earth. Worried about this anomaly, the United Nations gathers and sends four teams of the world’s greatest soldiers and researchers to Antarctica to investigate this phenomenon. Upon entering the Schwartzwelt, an unfortunate accident occurs. Each of the four teams is trapped, and loses communication with the others. After the incident, the Red Sprite, the team to which the unnamed American soldier you control is assigned, quickly discovers that the Schwartzwelt is full of demons, who are ready to slaughter every human who enters their world. Fortunately, you have acquired a mysterious application called the Demon-Summoning Program – a program that allows you to visualize and summon demons. You must take advantage of this newly acquired application in order to survive and escape the Schwartzwelt. Will you be able to find any survivors or a way out? Most importantly, will you be able to prevent the Schwartzwelt from growing? The interesting thing about Strange Journey’s characters is that it consists of ordinary adults; there are no teenagers or children, the likes of which you’d normally see in a JRPG. While it’s refreshing to see characters like this in a JRPG, Strange Journey sadly drops the ball on character development. Only about five characters have any personality, and they don’t start to develop an interesting personality until the second half. It’s disappointing that so few characters are developed, since this diminishes the impact of the story.

Strange Journey’s narrative starts off as a simple rescue & escape mission; unfortunately, it takes approximately thirty hours for the game to break away from this simplicity. The first thirty hours can best be described as monotonous fetch quests: check here for any survivors, gather x item to gather information, get y item so we can advance to the next section, etc. There are many times where the plot drags, and you can't really be blamed if you aren’t willing to wait for the story to pick up, because I put the game down twice before reaching the interesting portion.

If you do manage to persevere, then you will be treated to the sort of dark, religious tale that Shin Megami Tensei is known for. You encounter opposing forces (angels and demons) and watch them manipulate you to join their side, so they can visualize their dreams. The disappointing thing is that the manipulation isn’t well done compared to Devil Summoner 2 and Devil Survivor; in fact, neither side really brings any convincing points that make you think. Anyway, it’s completely up to you, on whose side you’re going to align with, if any, and the alignment you choose alters the game’s ending. The narrative has many flaws, such as being badly paced, but this is understandable: Strange Journey places more emphasis on gameplay, especially in the later levels.

Strange Journey’s core gameplay is first-person dungeon crawling. For the most part, the game does a fine job of keeping dungeon-crawling fresh and enjoyable, as each dungeon adds a new twist. The first dungeon is pretty straightforward, but the second introduces floor traps. Dark corridors, teleportation pads and conveyors are thrown at you soon after. The last few dungeons, however, rehash the same dungeon traps introduced before, so dungeon crawling gets slightly repetitive here. Aside from dungeon traps, the Demonica suit which the main character wears enhances dungeon-crawling, as it carries applications that allow him to discover hidden doors, enemies and forma. Forma is essential for creating items and equipment, and upgrading your Demonica with sub apps. If you don’t have the appropriate Forma, you won’t be able to generate the product you desire, so dungeon exploration is encouraged.

Alongside navigating through some well-designed dungeons, you’re going to be battling with a lot of demons. Strange Journey utilizes an ordinary first-person turn-based battle system, and it is by far the simplest battle system I’ve seen in a MegaTen game. You input commands such as normal, gun or magic attacks, and watch the action take place after that. It’s game over once the human character dies, and it’s extremely frustrating when you get killed by an instant death spell. Fortunately, there is equipment that can nullify these cheap spells. The main character can be accompanied by three demons, and having many demons of the same alignment is crucial for co-op attacks. Battles are much more forgiving than previous MegaTen games, but they’re also less exciting. Strange Journey’s battle system feels very limited: you’re forced to use demons of the same alignment to gain an advantage in battles, and there’s basically no punishment for having your weakness exploited. The only battles that I found exciting were the boss battles (since they require a great deal of strategy), and those battles where I encountered a new demon. New demons first appear as a static image, so you have no idea what you’re facing. This makes the atmospheres in these battles tense. There’s always the possibility of one of your attacks backfiring. Once the demon has been defeated, you get a clear image of it, but the demon’s weaknesses aren’t displayed until you raise its analyze gauge. A demon’s analyze gauge can be raised by encountering the demon multiple times, or using him in battles.

Demon recruitment comes in various forms. The first method is by negotiation, where you answer a pair of questions and bribe the demon to join you. Unlike Devil Summoner 2, demons don’t normally run off with your items; the only demons that ran off with my items were demons of the opposite alignment. Negotiation is a hilarious procedure, and you really get to know the demons' personalities through their questions and responses. My main complaint with negotiation is the random element involved. Let’s say two Jack Frosts ask you the same question, and you respond to them with the same answer. One Jack Frost might appreciate the answer you gave him, but the other Jack Frost might not. Another way to gain demons is by fusion, and Strange Journey’s fusion system is by far the best in the series. Fusion allows you to combine two or more demons to create a new, and hopefully stronger, demon. Strange Journey’s fusion system introduces Demon Source. You acquire a Demon Source by leveling up a fully-analyzed demon. It contains a set of skills from the demon you leveled up, and can be used in fusion to offer the skills to the newly created demon. This is a welcome addition to the fusion system, as it adds more flexibility, greatly reduces the time spent on selecting and canceling, and makes crafting the perfect demon easier. The last way to acquire demons is through passwords, and this is incredibly helpful when you’re stuck fighting a boss. You can search the internet for demons that have the skills and stats you need to overcome boss fights.

Strange Journey isn’t technically impressive, but the game excels with its dungeon and demon designs. The interesting thing about the dungeons is that they’re a mirror image of human society: one dungeon looks like a red light district; another resembles a shopping mall. Unlike in Devil Survivor, demons are fully animated. While the animation isn’t impressive, it’s certainly a step-up from Devil Survivor’s dull, lifeless presentation.

One of my favorite things about the MegaTen games is the soundtrack, but Strange Journey’s soundtrack is a huge disappointment. Instead of the usual guitar-wailing tunes, the soundtrack is composed of orchestral-style tracks, but these are bland and forgettable. It’s awfully repetitive: the soundtrack selection is short, and it certainly doesn't help that the majority of the tracks sound the same. While it does fit the tone of the game, I would have liked more diversity, especially in a lengthy game like this.

Speaking of length, Strange Journey is an extremely long game. The main story can take anywhere between 40 to 60 hours to complete, but the game contains a large amount of extra content that can easily lengthen your experience to 100 hours. There are over 60 side quests, numerous achievements, multiple endings and over 300 collectable demons (the most in any MegaTen game). The game’s length, however, is also a weakness, since it hurts some of the replayability. Once I finished the game, I didn’t feel like replaying it, because there were many instances where the game dragged on, and the optional content offered didn't compel me to replay it.

Strange Journey has a lot of flaws, mainly deriving from the story, character development and soundtrack, but despite these flaws, it's good throwback to classic MegaTen. The combat is fairly average, but the dungeon exploration and demon recruitment save the gameplay from being a total bore. If the game manages to enthrall you, be prepared to lose your precious time with the massive content provided. Series aficionados and old-school gamers might certainly find some enjoyment in Strange Journey, but I simply can’t recommend this to newcomers to the series and to those who prefer story over gameplay. You have to know what you’re getting into when jumping into a game like this.