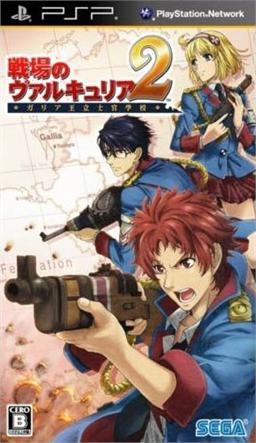 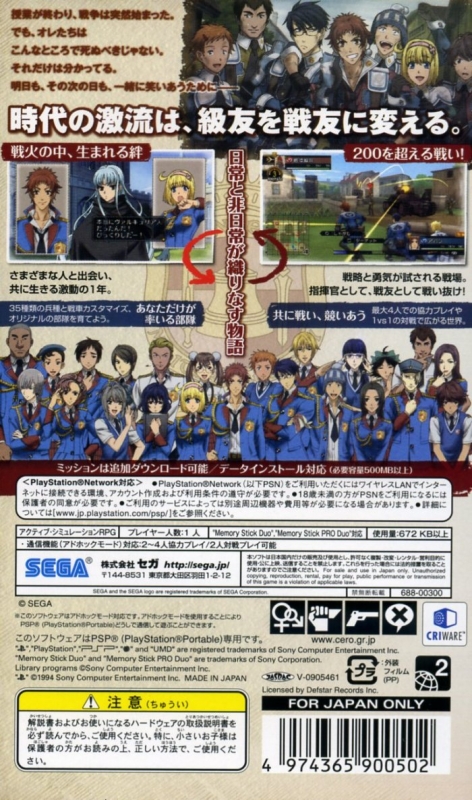 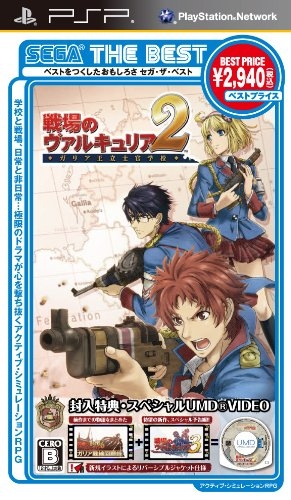 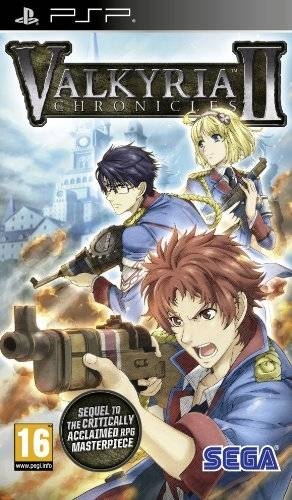 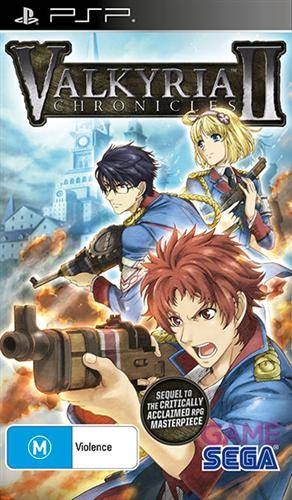 Studying war has never been this much fun!

When Valkyria Chronicles was released for the PlayStation 3, the interactive entertainment world was introduced to a stunning game that shook the foundations of the Strategy RPG genre. Critics and gamers alike raved over the action/strategy hybrid gameplay, the engaging storyline, and of course, the beautiful graphics. Valkyria Chronicles quickly became a cult classic--known to gamers everywhere, but it never lit up the sales charts. Despite the lack of sales success, Sega greenlit a sequel, but for the PlayStation Portable instead of the PS3. This is a change that divided the Valkyria Chronicles community, with many saying that the game’s move to handheld gaming would be a detriment to the series. Now that the game is here, the question can be answered: Did Valkyria Chronicles II succeed on the PSP? First things first: Valkyria Chronicles II is NOT the exact same game as its predecessor. The graphics are not as beautiful and the maps are not as expansive. This should be expected, given the change in gaming platform, but both are commonly viewed as negatives. The game’s art style is still similar and it is one of the better looking games for the PSP. Each mission has multiple maps instead of one large, expansive one. This change will cause series veterans to alter some of their strategies, but that does not make it any worse of a game, as I will explain later on.

Story Mode puts you in the role of Avan Hardins, a cadet at Lanseal Academy, a training ground for young Gallian soldiers. Two years after the events of the first game, a civil war has broken out between the Gallians and a group of revolutionaries looking to purge Gallia of the Darcsen race and purify the country. The Gallian army is engaged with external affairs, leaving the duty of fighting the civil war to the Academy cadets. The story takes a number of twists and turns as the war progresses, and taps into elements sometimes overlooked by other war games. The racism and persecution of Darcsens is an omnipresent theme throughout the game, as is the constantly re-affirmed belief that all soldiers, even those in the enemy ranks, are real people, with their own agendas, personalities, and lives. Even while defeating the enemies on the battlefield, you will sometimes hear radio mourning the loss of those you have defeated, and what a soldier plans to do after he’s done in battle. This all combines to create an atmosphere of war as a human act, not just about slaying the opposition.

Gameplay uses the same BLiTZ engine as the first game. You take the role of a field general, commanding your troops individually. During each turn, you are given Command Points (CP) which you use to move your units. Most units require one CP per movement, but some tanks need two, and special Orders can require even more. When a unit is selected, you have a limited amount of Action Points (AP), with which you can move it freely about the map. The action is on-going while you’re moving, so you can be shot at by enemies as you traverse the war zone. When you raise your weapon, all this will come to a stop as you aim your weapon and fire. Splitting up your CP between your units, who will often be on multiple maps, is critical as you attempt to achieve all your objectives in a mission while also not leaving anyone in the line of fire or leaving camps defenseless. Infantry units are divided into five main classes. Scouts, as their name suggests, scour the map, allowing you to discover the location of enemies. They have the most AP of any class, but limited firepower. Shocktroopers are a solid, all-around class that provides the heavier weapons used to finish off enemies. Lancers are equipped with heavy weapons that specialize in defeating tanks or other armored units. Engineers reload the limited-ammunition weapons of any units they touch (grenades, rockets, mortar fire, etc). New to the series is the Armored Tech class. These units carry a blast shield and a melee weapon, making them great for base defense or walking into gunfire to take out a tough opponent. These five classes can be upgraded into many other sub-classes, including the Sniper (no longer its own class as in Valkyria Chronicles), Mortarer, Heavy Gunner, Commando, and Fencer. Upgrades are financed by credits, which are awarded to units after a mission is complete. The more active a unit is, the more credits that unit will receive (so a unit that captures base camps and defeats tough enemies will reap the rewards, while a unit left in the base camp will not). All classes can also be leveled up using the EXP gained from missions, and every member of a class will level up together. Weapons and armor for all classes can be purchased through R&D.

Tanks and APC vehicles are purchased and upgraded through R&D as well. Valkyria Chronicles II boasts a variety of ways to modify your tank or APC as you desire. The body can be altered, allowing the vehicle to have more space to carry more units or parts to be added. It can also add features such as off-roading and ice breaking. The turret’s weaponry can be changed from the standard Anti-Armor/Mortar/Gatling trio to more powerful versions of these weapons, different pairings, or new weapons such as the Ragnite Rounds that decimate enemy armored vehicles, artillery shells and flamethrowers. Shoulder parts can also be attached to boost certain stats or negate weather effects. Armor can be improved, on the front, sides, or back. A constructor arm allows the tank to build ladders and bridges on the fly. Markings and stickers are cheap additions that give small boosts to your vehicle as well. You get the point--you can easily equip your vehicle for any given situation.

There is plenty of content in Valkyria Chronicles II, with over 200 different missions to choose from as you progress through the game. Non-story missions are even more varied, as enemy placement is random. On the first run through a mission, you may encounter light resistance, but the next time there could be two snipers with their sights set on your home base. This helps to make an already large slate of missions even more varied, increasing the replay value significantly.

Most missions in Valkyria Chronicles II fall into broad categories (such as camp defense, defeat all enemies, camp capture and escort missions), but share similarities. The action takes place on multiple maps, with access to each maps granted after capturing a gateway camp. Capturing these camps on one map allows you to deploy troops in the connecting camp on another map. This makes the game feel a bit smaller than Valkyria Chronicles, but having to keep track of multiple maps at once adds a new layer of strategy and adds another degree of complexity to the game. The gateway camps create a greater emphasis on retreating and deploying units from camp to camp. Units inside a camp can be retreated at no cost; otherwise, a 1 CP cost will apply. A new feature that Valkyria Chronicles II introduces to the series is multiplayer. You can play ad-hoc, either Co-Op or Versus. Co-Op allows two players to play through missions together. A big advantage to this is that a player who is struggling to beat a key mission can enlist the help of another player, who can bring in their units, at whatever level they may already be at, to help the struggling player get through the mission. Versus Mode pits two players against each other, with goals varying from defeating all units to capturing the opponent’s base camps. Those who may find the AI too easy in the game can get a major challenge against another human that knows exactly what they’re doing, and legendary fights can ensue.

Not everything is rosy about this game, however. In battle, there are some occasions where, after selecting a unit, it can take a few seconds before Action Mode starts. This happens most often with tanks, particularly when calling one into a new camp (as it must adjust if another unit is in the camp, so as not to drop a tank on them). This minor lag time also appears in the R&D, specifically in the tank menus. I would also like to have seen the option to have a second leader granted sooner in the story; until that point, your only leader character is Avan, who will grant you an extra CP as long as he is deployed. This contrasts with the original Valkyria Chronicles’ multiple leader characters from the very beginning of the game.

Valkyria Chronicles II may have moved the series to the little brother of the PlayStation family, but to assume that the franchise has been made into a pint-sized version of its former self would be a humongous mistake. What Valkyria Chronicles II lacks in map size and top-of-the-line graphics, it makes up for with hundreds of missions, new classes, heavy customization, and a robust story that make the game much more massive than the transition to handheld gaming would lead you to believe. With all this shipping at launch and plenty of downloadable content to come, Valkyria Chronicles II is truly a worthy addition to the franchise and proves that a small system can still pack a huge punch.