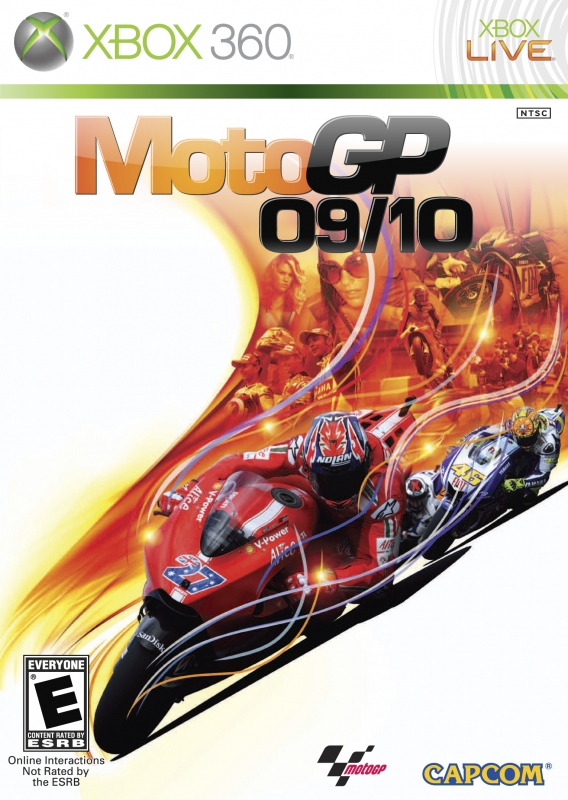 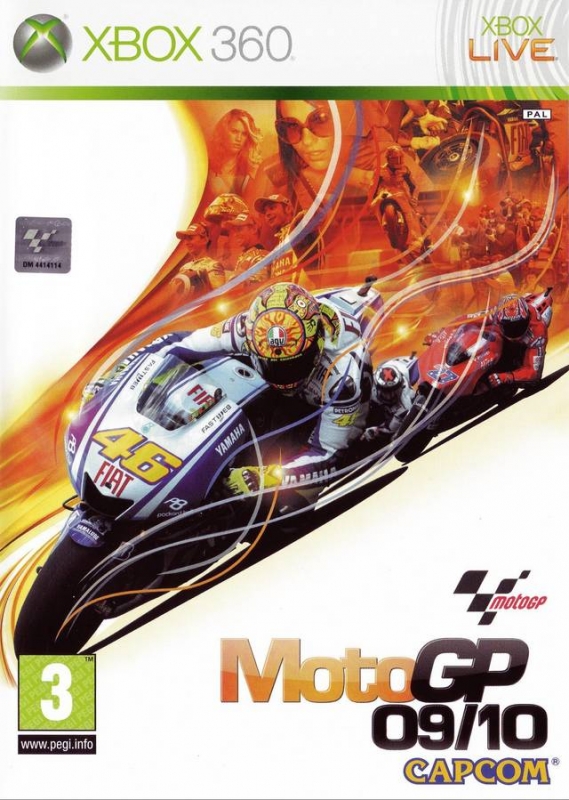 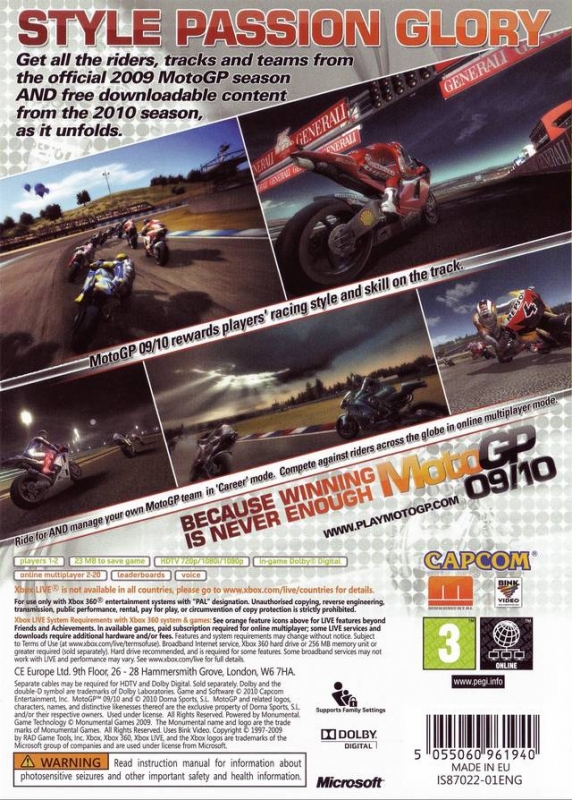 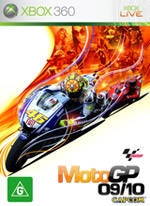 Can MotoGP 09/10 restore the pride of the oft-overlooked two wheeled racer?

MotoGP 09/10 is a title that feels comfortable mixing and matching the simulation and arcade approaches of the racing genre. The learning curve will feel quite steep for newcomers to the racing genre, and even those coming from a four wheeled racing background, with corners being much more difficult to handle than in a standard racer, requiring more forward planning and tighter control throughout the turn. So far so good, but MotoGP 09/10 consistently pulls back from being realistic – you need not pay much attention to the position of your rider on the bike and his weight distribution, for example, and use of the tuck button is essential, giving an unrealistic boost to your speed. There’s also a coloured racing line which feels like an essential aid until you’ve learnt each track, more so than in other types of racing games. It all adds to the game's accessibility, but it ultimately dulls the unique nature of motorbike racing.

The AI racers form homogenous packs that lack any sense of personality or competition, and yes, rubber-band AI rears its ugly head too. Being driven hard to the line is fun, cheating AI is not. Damage physics and modelling are both non-existent. If you get shunted from behind by the AI it merely gives you a nice speed boost, when instead it should be causing a huge pile-up. Clip another bike on the apex of a corner and they’ll be nudged gently to the side. If you do manage to crash your bike the animation is so woefully poor you could almost be forgiven for thinking it was intentionally bad; a homage to B–movies everywhere. Not realistic, to say the least.

The gameplay is unlikely to endear itself to real biking enthusiasts looking for a true sim then, and some of these gameplay features are throwbacks to the PS1-era, and they were considered somewhat deficient even back then. Nonetheless, it’s a gameplay system which rewards learning, even if it lacks depth when you peer too closely behind the curtain. 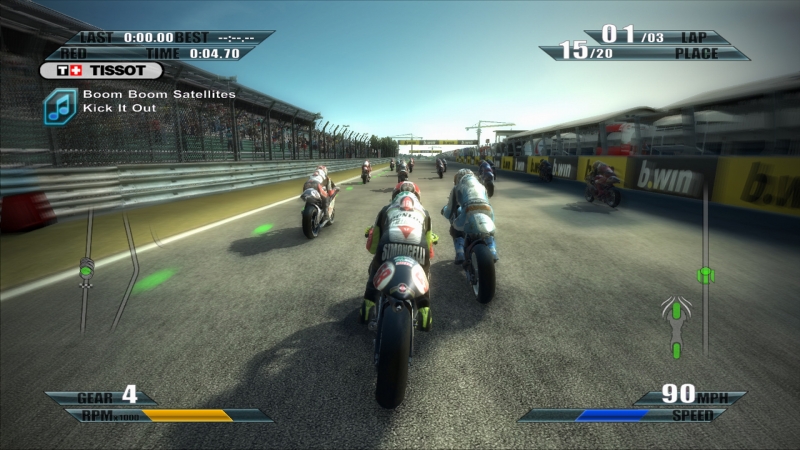 The visuals are fairly average. On the one hand the game is bright and colourful. Motion blur, similar to that which featured in Need for Speed: SHIFT, make a pleasant appearance, although its implementation is not as impressive here. There are 18 accurately replicated tracks and fully varied weather effects. On the other hand, as I’ve already mentioned, crashes are almost non-existent and wholly unedifying spectacles. There’s an overall lack of detail and MotoGP 09/10 is clearly visually inferior to all of the medium and large scale racing releases of the past couple of years. Solid, average, inoffensive to the eye; it gets the job done but goes no further.

The soundtrack is pretty solid and the text which pops up to inform you of the track that’s currently playing is a nice inclusion. One thing to note is that if you’re a big fan of racers then you may notice that some of the tracks have been used in other recent racing releases. The menu music is also well chosen and pleasant to listen to. Sound effects are less accomplished; all of the engine sounds lack the power you would expect of them. They all sound slightly muted and underpowered. The Scottish voice over is perfectly fine, but the lines of dialogue soon become repetitive and you quickly come to resent his words of advice.

MotoGP 09/10 includes the usual wealth of gameplay modes – Career, Championship, Arcade, Time Trial and Multiplayer, each featuring 150cc, 250cc and 800cc bikes. The most substantial one is the Career mode, so I’ll detail that first. Here you create and customize your own team, from rider and bike to staff and sponsorship deals.

Your career is broken up into a series of racing events, in between which you’re able to manage your team. This includes hiring press officers and engineers, the former netting you improved sponsorship opportunities, the latter you’re able to set to work on specific upgrades for your bike. There are plenty of opportunities for cosmetic customization as well, including your team’s name and colour scheme. These are all great features. With sponsorships you need to complete certain objectives during your races in order to build up your finances. These earnings allow you to hire and pay the wages of more effective staff, without which you’ll find yourself struggling to compete. The upgrade system also works well, and you’ll soon notice the improvements, even if, like me, you haven’t a clue about the mechanical workings of a bike (or anything else for that matter). The management side of the game isn’t too complex or deep – a good thing on the whole – but it does break up the action nicely; without it the main events would soon become increasingly monotonous. 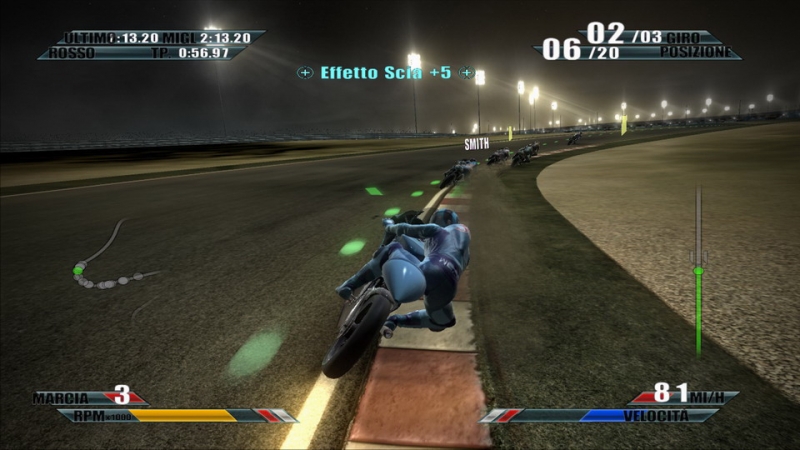 Main racing events are broken up into three parts – practice, qualifying and the main race, with only the race itself being compulsory. A reputation system is included which allows you to earn points and grades for each racing event. You gain points for certain ‘good’ acts, such as slipstreaming, setting a lap record, holding the racing line or performing clean sections, and lose them for ‘bad’ acts, like collisions (not that there are any, really) and being overtaken. Beyond this you can also earn reputation for completing random dynamic objectives during the race, these can include ‘intimidating’ opponents, hitting a high speed etc. In contrast with the management side of the game, the reputation system falls flat and you'll probably come to ignore it over time.

Despite the strengths of the career mode, it is a little bit bland, and you soon fall into a repetitive routine of completing identical events, then perhaps swapping sponsors and setting the engineers to work on new upgrades, before then repeating the process over again, and again, until the end of the season. This is all well and good if you like working from the ground up, à la Forza or Gran Turismo, but it really does take a long time before you unlock the 800cc bikes – the actual MotoGP part of the game, and I’m not sure most people will have the patience for that with this particular game. 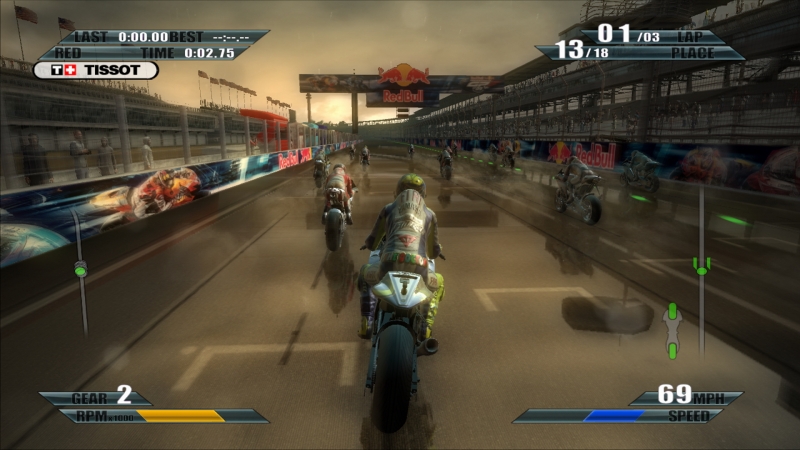 Championship mode is similar to Career mode, but with the management aspects stripped out (although you still can’t access the 800cc bikes until you’ve unlocked them). Time Trial is pretty self explanatory. Arcade mode is a throwback to more traditional arcade modes, where you race to the next checkpoint in order to add precious seconds to the clock.

Finally, there’s multiplayer support, both split-screen and online. MotoGP 09/10 boasts 20 player online races, but in my experience you’ll be lucky to get upwards of 10 in a race. There aren’t many active lobbies and the community is a bit thin on the ground, but you should be able to find a match without too much trouble. The small community isn’t the fault of the actual service on offer though – my games were lag free and smooth enough, although it would be useful if you could see what lap the racers in lobby you’ve just joined are on, so you know roughly how long you’re going to have to wait before the next race starts.

There’s a substantial amount of content on offer – MotoGP 09/10 really ticks all of the boxes in that respect, and the promotional blurb promises DLC in the form of 2010’s updated roster of racers, bikes and stats. The content is there then, but MotoGP 09/10 simply has too many flaws elsewhere that limit it, from average presentation to gameplay that falls into many of the genre’s long-standing potholes.