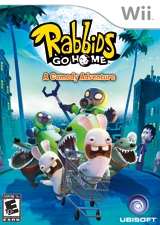 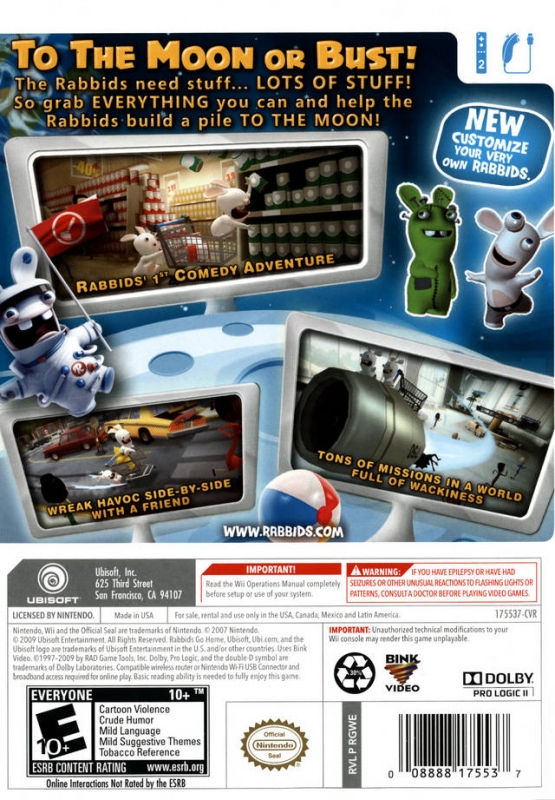 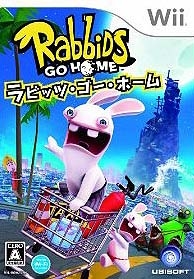 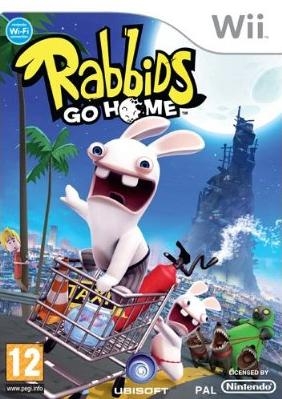 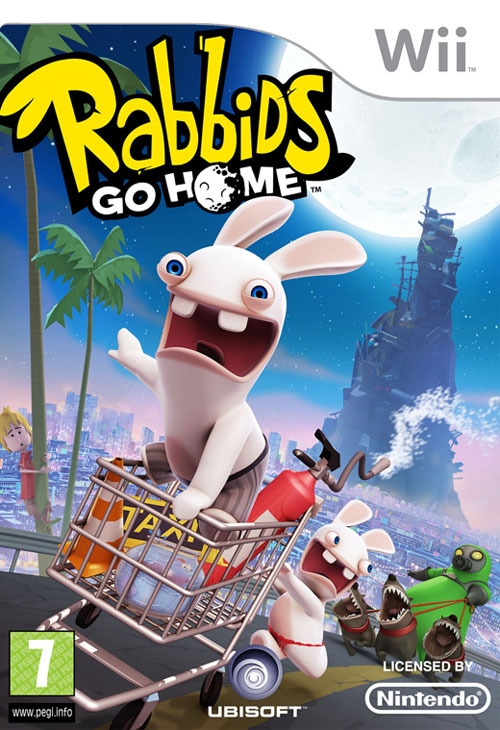 You know you’re in for a crazy ride in a game when even the start up screen gives you the giggles. Rabbids Go Home is the fourth game in the Rayman spin-off series featuring the slightly demented Rabbids. Gone this time are the wacky, senseless mini games,replaced by a wacky, senseless comedy adventure straight from the mind of Beyond Good & Evil creator Michel Ancel. So does this crazy story soar to the moon and beyond, or have the Rabbids simply lost their touch? BWAAAA!

The story opens with the Rabbids deciding that the time has come to leave the world of the humans and return home. Where is home? Why, the moon, of course! So to make up for their distinct lack of a space program, the Rabbids decide to collect (see: steal) all the humans' stuff from a nearby city and build a giant tower that will take them to their lunar home. The story never takes itself too seriously, and is presented in a very ‘Saturday morning cartoon’ style. An almost episodic feel connects all the levels, complete with title cards similar to those 1990's Nickelodeon cartoons. Although this gives the game a very unique feel , this comedy adventure is very light in the story department, with the basic goal always being ‘get stuff, go to the Moon’.

At its core, Rabbids Go Home is a basic adventure game with a few platforming elements thrown into the mix. You control two Rabbids on their quest to collect anything and everything, one in a shopping cart and the other pushing the cart. Movement is handled by the control stick on the Nunchuck; the ‘A’ button makes the Rabbid who is pushing the cart run, ‘B’ controls the speed burst, and the Wii Remote’s pointer used in tandem with the ‘Z’ trigger is used to launch other Rabbids into obstacles, either to stun an enemy or flip a switch. Finally a quick shake of the Wii Remote will make the Rabbid who is riding the cart use his scream ("BWAAAA!") attack. There are a couple of oddities in the control department, however. The first is that the lack of a jump button can make some of the more precise platforming a pain to handle, this combined with the fact that the game gives you no control whatsoever over the camera can make some of the more difficult stages a Rabbid's worst nightmare. One last minor gripe: why is the ‘-’ button the Pause button, while ‘+’ does nothing? This just seems like a really odd decision as most Wii games that use the Nunchuck and Remote combo use ‘+’ as the standard Pause button.

To build their tower to the moon, the Rabbids are going to need a lot of stuff, and it's up to you to collect it! All the game's stages are connected by a central hub known as the City Center, and as your tower of junk gets bigger new areas will be opened for you to pillage. You go through each level picking up circled items and throwing them in your shopping cart; at the end of each area is an 'XL' item that must be collected to complete the level. To impede your progress, the game will throw a few enemies your way such as humans in biohazard suits, dogs, and cleaning robots, most of which can be dispatched with a simple scream attack. In fact, most of the enemies don’t present a real challenge and can only get slightly annoying when there are many of them to defeat in a small environment. The game even goes as far as to give you infinite lives. Couple this with the numerous checkpoints per stage and you will rarely find yourself faced with a challenge that simple repetition can’t solve.

The game does offer some variety in the gameplay department. Levels will have you sliding down a mountain in an inflatable tube, riding a jet engine through an airport, or floating above obstacles by using a bubble bed as a hot air balloon. There are even three unlockable mini-games that, when completed, will increase your Rabbid's health in the same style as the Legend of Zelda series. However, these mini-games are mostly mindless waggle-fests, which is a shame considering the Rabbids series is known for its zany and innovative mini-games. The game even includes a multiplayer mode similar to the one found in Super Mario Galaxy, where a second player controls the Wii Remote’s pointer and helps shoots Rabbids at enemies and collect items. This comes off more as an afterthought than a fully fleshed out mode and doesn’t add anything to the actual game other then being able to share the laughs with friends.

And that’s exactly what this game is all about, laughs. In the same style as your favourite Saturday morning cartoon, the Rabbids will harass, annoy and generally wreak havoc in the human city to get their hands on items ranging from fire hydrants, soda bottles, and people’s clothing to everything in between. The graphics, art style and sound design all play off this cartoon-like feel perfectly. Visually the game is very bright and colourful and the environments are well detailed and often quite large. The only drawback is the poor technical aspects - events such as clipping and screen tearing are common, and show that the game could have maybe used a bit more attention in this regard. The graphics, while not stunning or jaw dropping work well in tandem with the art style and serve this game very well. The animations on the characters are particularly good, notably the Rabbids facial expressions which are just as well animated as they are hilarious.

Soundwise the game delivers on all fronts, with a classic rock and blues soundtrack with such tunes as ‘Leavin’ On Jet Plane’ and ‘Jamaica Farewell’ mixed in with the Rabbids own brass band accompaniment. Even the Rabbids' screams and gibberish will leave a lasting impression on you, and no matter how old and jaded you are, you will still giggle at the yells of "BWAAAA!" from time to time. The voice acting in the human characters is also quite funny, from the random scared pedestrians to the lady on the intercom who gets more and more annoyed with the Rabbids shenanigans as the game goes on, it’s all quite humorous and complements the Rabbids own crazy antics wonderfully.

Rabbids Go Home features 35 levels, and will take between 5 and 7 hours to complete if you’re just cruising through the game, or 10-12 hours if you’re a perfectionist. However once you complete the main game, there isn’t much more to see, and the game only has the one difficulty setting. However, the addition of 2 player co-op is a nice (albeit shallow) addition. The biggest extra that the game does offer is the ‘In Zee Remote’ mode where you can ‘suck’ a Rabbid into your Wii Remote and, after you're done shaking him all around, you can customize him with hundreds of different items found throughout the single player campaign. The game also installs the Rabbids Channel on your Wii menu which serves as this game’s own version of the Check Mii Out Channel, here you can enter contests based on themes provided by Ubisoft to see who can create the best Rabbid, you can even download Rabbid themes and additional customising items for your very own Rabbid.

It’s a breath of fresh air to see the Rabbids finally step out from Rayman’s shadow and headline a game that is entirely their own. This comedy adventure may be geared towards a younger crowd with its sometimes crude humour, but even older gamers will still enjoy the attention to detail and classic Banjo-Kazooie style ‘collect-everything’ gameplay. So here’s hoping the Rabbids haven’t truly gone home and will keep on entertaining us for years to come. BWAAAA!