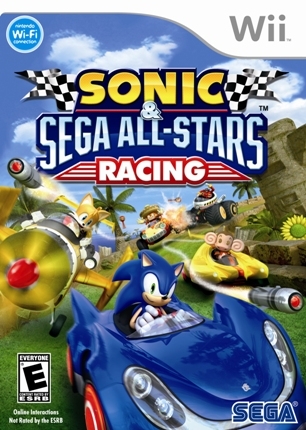 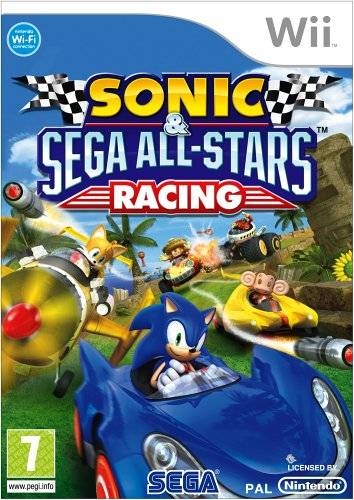 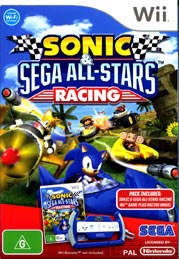 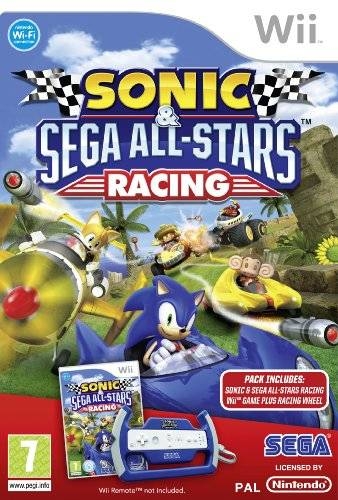 Sonic in a car? Blasphemy!

Ever since the release of Super Mario Kart, there has been a tried and true formula for “milking” a franchise. Take characters, insert them into go-karts or other similar vehicles, create racetracks, add zany weapons, release to the general public. While there have been a few games that have managed to transcend the scent of milk and become a solid gaming experience, many have been lost to irrelevancy, failing to be anything more than a cash cow. Now, Sega and developer Sumo Digital have combined over 25 years of Sega nostalgia into their own kart racer, aptly named Sonic & Sega All-Stars Racing. Can they transcend the kart racing stigma?

It does not take long to realize that this game has closely emulated the Mario Kart formula. Mascots in cars, bikes, and hovercrafts, racing on racetracks themed after popular Sega games, shooting weapons such as a green boxing glove and a red homing missile at each other. Although it is not original, it is executed well.

Bright, cartoony graphics are the norm in a mascot kart racer, and Sonic & Sega All-Stars Racing does not deviate from this standard. The graphics are easy on the eye with a lit up and excited atmosphere throughout all the menus and racetracks (other than the intentional darkness of Curien Mansion). Those looking for eye candy will be disappointed, however, by this game’s graphical presentation. With the increasing number of games taking graphics to new, realistic heights, it becomes even more noticeable when a game looks dated. While the visuals in a kart racer such as this do not need to be ultra-realistic, it is worth noting that the graphics are not that much better than would have been expected of the previous generation.

There are a variety of control schemes on each platform, so it's likely that you'll find one that is comfortable for you. The Wii version allows use of the Wii Wheel, Classic Controller, and Wiimote/Nunchuk combo, while the PS3 version has both standard and Sixaxis motion control choices, and the 360 version has several variations of the standard controls.

All vehicles handle well. If you’ve played a kart racer before, it will not take long before you are able to drift around the tracks with relative ease. Drifting is based off of the Mario Kart Wii system, where you only need to hold onto the drift button for a couple of seconds to automatically charge up to a Level 2 boost, instead of the more manual boost charging required in games such as Mario Kart DS or Crash Team Racing. In addition to drifting, you can also perform mid-air tricks, which if executed properly will give you a speed boost upon landing. Bikes are also capable of doing tricks while on the racetrack. All racers are graded on their speed, acceleration, handling, and turbo-boost, letting you know who will be the fastest on the track (it’s not Sonic!), who will best keep their grip, and who will make the most of their boosts.

Items are mostly standard fare for this genre. The K.O. Glove shoots straight and can bounce off walls before colliding with an opponent, while the Rocket is a guided missile that will seek out its foe and blast them to smithereens. There is also a Giant Rocket which travels along the center of the track until the user detonates it. Mines can be placed to explode on opposing drivers or block incoming missile attacks, while the Shield protects from the aforementioned missiles as well as any racetrack obstacles for a short time. Some non-traditional items are also in the arsenal of this game. The Mega Horn unleashes a loud horn sound that will spin out anyone nearby, while the Pocket Rainbow can be dropped onto the track and obstructs an opponent’s view of the track with a beautiful rainbow. Sure to annoy most racers is the Confusing Star, which will turn the game screen upside down for a few seconds, undoubtedly causing much chaos. Finally, the All-Star Move is the equivalent of a special attack for each character that is often used to help a racer come from behind. The All-Star Move is based upon the character, so you can expect Sonic and Shadow to morph into their super forms, Aiai to turn into a Monkey Ball, Eggman to fire rockets, and even more bizarre moves such as Ryo Hazuki in a forklift.

Gameplay modes include Single Race and Time Trial, where you can race against the clock, your own ghosts, or ghosts downloaded online. Grand Prix is what you think it is - trying to win a cup in a group of four racetracks. There are over 60 missions in mission mode, varying from winning races to destroying targets to collecting all the rings. New tracks, characters, and music can all be purchased with SEGA Miles, which are awarded to you in every play mode at the conclusion of a race or mission. Track layouts are well designed (with the exception of the chaotic, ninety-degree turn littered Super Monkey Ball stages), and are populated with numerous references to that track’s particular franchise. You’ll race through seaside beaches, robot factories, busy Tokyo streets, cavernous volcanoes, a mansion full of zombies, and more.

All Stars Racing has a robust character roster rich with Sega history. Unsurprisingly, the Sonic series is the most represented, with the expected gang (Sonic, Tails, Knuckles, Amy, Eggman, and Shadow) as well as that one character few people actually like (Big). The roster also includes representatives from the more well known (Virtua Fighter, House of the Dead), the cult classics (Shenmue, Jet Set Radio), and the obscure (Bonanza Bros.). There are over 20 characters in all, including console exclusives. The Wii version allows you to race your selected Mii in the game. The Xbox 360 will let you do the same with your selected Avatar, as well as let you race with Banjo and Kazooie. The PS3 is completely shut out of the exclusive character department (that’s right, no Sackboy, no Kratos, not even Alicia and Welkin of Valkyria Chronicles fame).

The audio will make a Sega fan happy, as most of the songs in the game are from the multiple series represented in the game (there are also a few original songs). Less interesting is the addition of a rambunctious announcer who is quick to chime in with rehearsed puns regarding the action occurring in each race. This addition may make the kids laugh, but his overbearing voice is repetitive and quickly grows stale and unfunny. Thankfully, the announcer can be turned off in the options menu.

Online multiplayer, however, is where the game suffers. This game has a very bare bones online mode. The only playable option online is the Single Race mode, while the split-screen offline multiplayer includes modes such as Battle, Capture the Chao, Grab the Emeralds, King of the Hill, and Knockout. Compare the online mode to Mario Kart Wii, which has multiple modes enabled online, and you’ll quickly feel gypped by how little Sega and Sumo Digital have offered. You can either join a lobby hosted by someone else or create your own lobby for other people to join. The host makes all the key decisions, such as the racetrack and other game settings, and up to eight players can face off in any race (with the option of letting AI racers fill missing spots).

That said, the online play functions well. I did not experience any major lag during gameplay online, and despite the lack of All-Star Moves (removed from online play due to latency issues), the racing was just as fun over the internet as it was locally. I did have some occasional difficulty staying in some game lobbies, and when it searches for a list of games it only gives you a short list of what is actually available at that moment. Voice chat is also available on the PlayStation 3 and Xbox 360 versions, but missing in action from the Wii version. Additionally, it has been confirmed that downloadable content will be added to the PS3 and 360 versions of the game, but the Wii version will not get any of these additions.

Sonic & Sega All-Stars Racing is exactly what you would expect from looking at its cover: a kart racing game with Sonic and buddies. But beneath that simple picture lies a well crafted racing game that will entertain Sega fans and Sega newbies alike. On the Wii, Mario Kart Wii is still the premiere kart racer, but there’s no doubt that this is the best racing of its kind to be found on the PS3 and 360 at present. Anyone looking for a fun romp through the Sega universe will be pleased with this title.