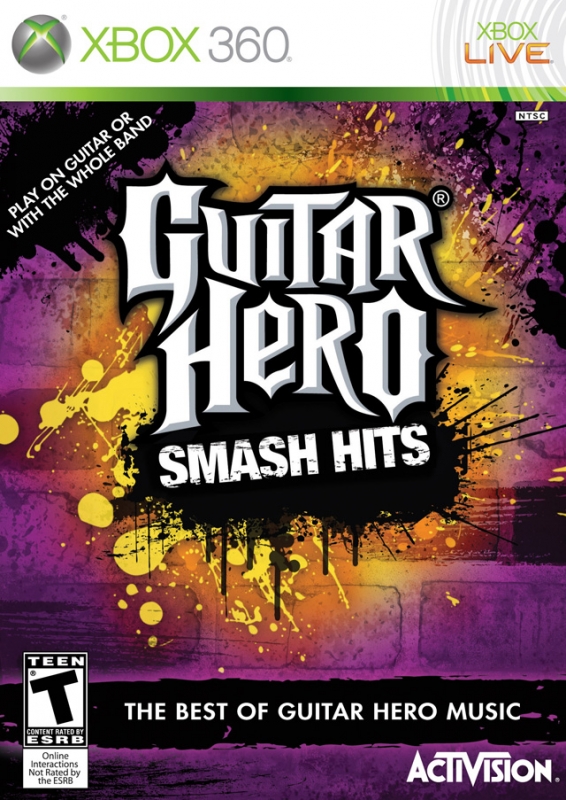 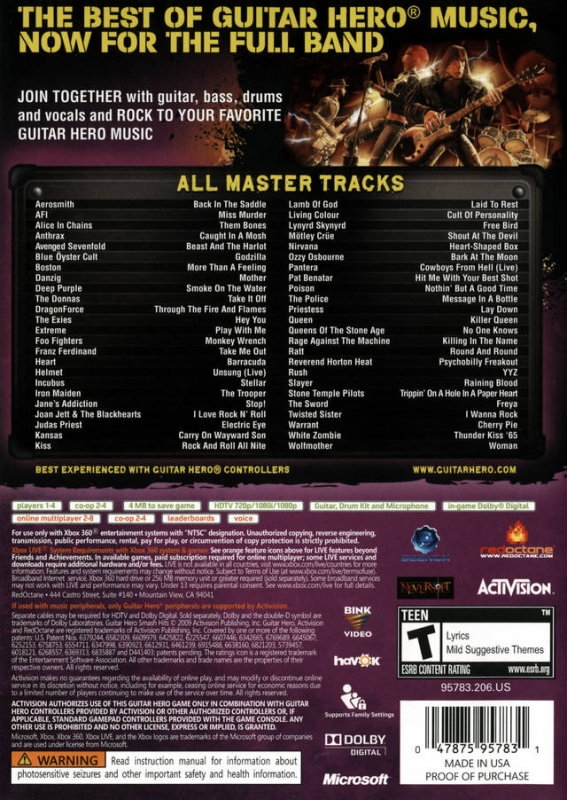 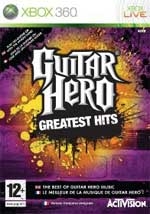 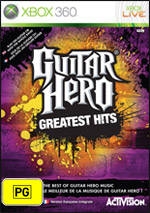 Haven't I played this song before?

Ever been playing your copy of Guitar Hero 3, trying to run the gauntlet that is 'Through the Fire and Flames', and wished that a couple of your friends could jump in and share the pain? Now, you can, with Guitar Hero: Smash Hits. You see, as the name implies, Smash Hits is not technically a 'new' Guitar Hero game, but a compilation of the most popular songs from the franchise. All of them have been updated with the ability to play them as a band using the instruments introduced in World Tour, and also use the new features of the more recent guitars, like the neck slider.

You likely already know the drill with these band games, so I'll just run through the basics real quick. The game supports any guitar and drum controllers released for any Guitar Hero or Rock Band game thus far, as well as the Smash Hits microphone for singing. For the instruments, notes of a certain color fall towards the bottom of the screen, and right as they pass through their circle the guitarist must press the corresponding button on his or her guitar while strumming, and the drummer must hit the right drum. For the singer, the pitch that must be sung for each syllable will scroll across the top of the screen. Playing well earns you 'Star Power', which can be used to get extra points, to get you back on track when you fall behind, or revive a bandmate who's failed the song. Basically, this is Guitar Hero: World Tour with different songs.

With that out of the way, everyone knows at this point that the real selling point of these rhythm games is the track list on offer. Guitar Hero: Smash Hits contains 48 master recordings of the most popular songs in the series, pre-World Tour. This includes the original Guitar Hero, Guitar Hero 2, Guitar Hero Encore: Rocks the 80s, Guitar Hero 3: Legends of Rock, and Guitar Hero: Aerosmith. This means that Bark at the Moon, Smoke on the Water, Message in a Bottle, Free Bird, Play With Me, Barracuda, Rock And Roll All Nite, Through the Fire and Flames, and Back in the Saddle, among others, are all playable with up to four players.

If you get tired of the included songs, you can always head over to the Music Studio and record your own, a feature that I found fun and remarkably easy to use. There are many different audio types, from 8-bit to various forms of metal. You can create as many songs as can fit on your console's hard drive. When you're satisfied, you can upload it to GH Tunes, to be downloaded by other players, and of course download theirs for free as well. In addition to the obligatory 2,000 versions of the Super Mario Bros 1-1 theme, there are some pretty unusual recordings on there which are definitely a leap from the style of the on-disc songs, so it's worth checking out.

Sound quality is standard for the series, which is to say excellent. As all the songs are master recordings, there's nary any scratchiness to be heard. Notes sound authentic when hit, and the particular instrument's track goes fuzzy in an intentionally startling way when players miss. The visuals are of a similar punk-graffiti style to the rest of the series, and the jagged font used for text is really in-your-face. The cartoony characters move fluidly, as usual, and animate in accordance with the notes being played. There are also tons of people in the audience rocking out along with you.

The Career mode is pretty standard - create a character, play some songs, earn cash, buy clothes, unlock new songs and venues. There's not much new to speak of here. One welcome change is that you don't need to beat every song at one venue to unlock the next. Instead, the next venue is unlocked by getting a certain amount of stars. So if it takes 10 stars to unlock the next venue, and you put on 5-star performances with two of the available songs, you need not play the others if you don't want to. This mode can be played in single-player, as well as local or online multiplayer.

Another welcome little addition is present in Quickplay mode. In previous games, you had to play through Career mode to unlock most of the songs in Quickplay, but each one is available right from the off in Smash Hits. This adds to the 'party game' feel, since you can pop the game in on anyone's system, even if there's no saved data on it, and rock out to any of the available songs (up to six of which can be set in a queue for seamless transitions between songs).

Head to Head multiplayer, for two players, contains three competitive game modes; Face-Off, in which two players alternate playing on the same note chart; Pro Face-Off, in which both duellists play the same chart at the same time; and Battle, a guitar-only mode in which scoring well earns attacks which can be used to frustrate the other player.

In addition to all previously-mentioned multiplayer modes, there is an 8-player Band vs. Band mode, which allows a group of friends on one console to match their rock skills against another online. It definitely adds to the competitive spirit of the game.

If you've just recently gotten into the franchise, Smash Hits is a great way to catch up on some of the most popular songs, meanwhile series veterans will appreciate all of the new features that have been added. So, unless you want to take the quick way out and just dial Through the Fire and Flames down to Easy, even slight fans of the series should consider picking up Smash Hits.