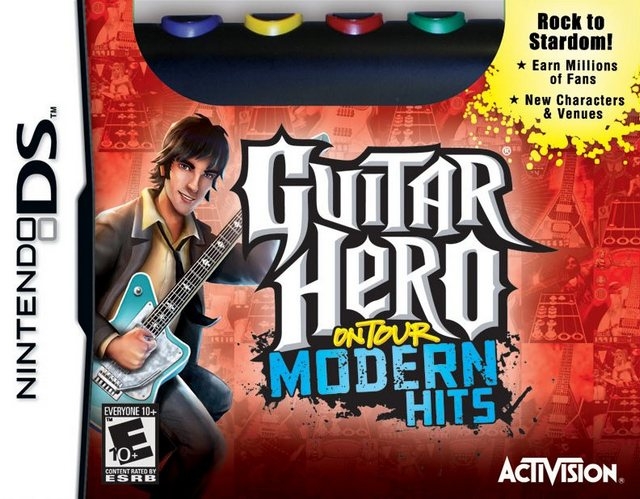 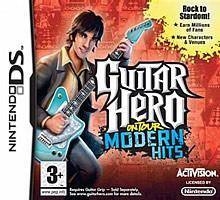 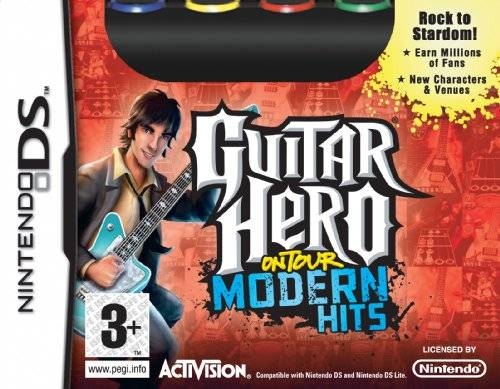 “I still feel like I am playing Accordion Hero sometimes, but it’s really fun.”

When Guitar Hero was originally announced for the Nintendo DS, everyone was confused. The main question was how they would tackle the interface. Was there going to be a quirky peripheral to tack onto the DS, or a more conventional interface, as was the case with Elite Beat Agents? Pretty soon pictures were released of the add-on, and many were skeptical. That was until everyone played it. Not only was it responsive, it was fun as well. Now we are three games into the series on the DS, and it looks like Activision has a winning formula on their hands.

First and foremost, a warning for all owners of the brand spanking new Nintendo DSi: Guitar Hero On Tour - Modern Hits will not work on your system in any way whatsoever, which is a shame really. Since the new handheld does not have a GBA slot, there is literally no way whatsoever to plug the peripheral in. With that out of the way, let’s discuss the good, the bad, and the ugly that is the "Guitar Grip" peripheral.

This was my first time with the Guitar Grip, and I was really impressed, but those that have played the other two games may notice that it is literally the same game with different songs. This means if you do not like the Guitar Grip, this game may be a pass, as nothing has changed.

After a bit of tweaking to set it up to work in my older original silver DS, I was ready to roll. This involves unscrewing the cartridge slot connection that it comes with and replacing it with a larger one made for the older DS. For owners of the DS Lite, you don’t have to mess with anything. If you really want you can then change the overlay paper or add some stickers as a set also come with the game. The Guitar Grip itself fits really snuggly into the DS, and only seems to have a bit of trouble on the harder difficulty levels. Sometimes, if jostled around a bit, you get the distinct feeling that it may very well pop out and end up on the floor, but this has never happened to me. As a test I did pull it out just to see what would happen, and nothing really bad went down - you just have to re-insert the device and reset the system.

The Guitar Grip does come with four buttons, one less that its console brothers. This makes the gameplay seem easier at first, but as you progress you’ll notice that this game is not a kid’s game. This comes in part in the way you play the game. You actually hold the DS in your left hand (for right-handers, left-handers will be playing it the other way) like a book with your left hand covering the keys. You then hold the pick shaped stylus in your right hand, and strum to the music. The strumming system really works well and somehow feels realistic despite the weird way you are holding the DS. I still feel like I am playing Accordion Hero sometimes, but it’s really fun.

The only real gripe I can think of for the Guitar Grip is that if you plan to play the game in a long marathon it may begin to hurt your hand pretty badly. This is due in large part to the proximity of the buttons to each other, but the designers only had a small amount of space to work with so one can’t fault them too badly. This button placement can however cause one big problem for some users. A common problem for people with large hands seems to be that the game is pretty hard to play very well, and actually quite painful. Personally I had no problem with this, and have somewhat large hands, but the issue is there, and you should take caution if this warning pertains to you.

Guitar Hero On Tour - Modern Hits contains both a free play option that is accessible at the very beginning of the game and a career mode. The free play mode makes available every song in the game from the get go, without the use of any codes or anything, which was a nice touch. The career mode allows you to name and choose the appearance of the lead guitarist in a fledgling rock band. You are then taken under the wing of Miss Heather, your new manager. Miss Heather gets you new gigs based on your fan level, a rating that grows once you complete songs and fan requests. As these songs are played through the first time players earn fans and open additional challenges for that song. These challenges task a player with playing through a song again while meeting a specific criterion like hitting a particular number of star power sections, winning a guitar duel, or maintaining a long enough streak. The further you get into the story mode, the harder these get, and some were downright insane. Luckily there are tons of fan requests, so if you are stuck on one, you can pass it up pretty easily. If you gain enough fans, new venues open up and new songs pop up. This mode is really fun, but the forced repetition may turn some off.

The guitar duels were especially done well as you gained DS-specific 'weapons'. For instance, you may have to manually re-string your guitar, blow out a fire caused by a reckless fan’s Zippo lighter, or pay attention as the two DS screens switch places, causing disorientation. There is a little more DS functionality present, which mostly revolves around you yelling into your DS to activate star power, and although these were a nice touch, they came off as being kind of gimmicky.

The song list in Guitar Hero On Tour - Modern Hits seems like a compilation of the best of 2005/2006 indy rock, and is mostly comprised of the huge wave of post-punk revival bands like the Kaiser Chiefs and Franz Ferdinand. Other tracks include:

In total there are 28 songs. For me it was nice to see a more “mature” track list (minus Fallout Boy) as most DS music games have a tendency to play “teeny bopper” acts like Avril Lavigne which clearly have their fans, but I am not too fond of them myself.

The graphics in Modern Hits are pretty good and look exactly like their console counterparts, just clearly less defined. The levels still have weird occurrences going on like a casino level with tons of slot machines rolling and such. For the most part these are good graphics, but are not the benchmark of what I’ve seen possible on the DS, and have shown no improvement over the last two games. This can be attributed to the fact that in the console versions your buddies might watch the game while you play, but this being a handheld game the spectator appeal is kind of gone. Aside from the in-game graphics, the career mode features some hand drawn artwork that looks pretty stylized and fits the tone of the game well.

The sound is perfection for the DS. The music all sounds like mid-level MP3 compression and sounds great coming from headphones. The DS speakers themselves aren’t as good and come off sounding a tad “tinny”, but the game actually encourages the use of headphones. I suppose you could also hook the DS up to a speaker or amp, but that sounds a bit silly. Aside from the music itself, there are some limited sequences with voice acting, but these are usually limited to fan requests and guitar duels so they are just more like the icing on the cake, not the cake itself.

All in all, Guitar Hero On Tour - Modern Hits is great value if you like the music. If you are not a fan of artists like the Bravery and such you should probably pass this up. Since I am a fan, I really like this version. The game comes in two flavors, one with the Guitar Grip and one without. Both are priced pretty well. The game and Guitar Grip combo runs for around $46.00 to $50.00, while the game on its own is typically priced at $30.00 to $34.00. One word of caution though, I have only seen these vanilla Guitar Grip-less packages online, and am not sure if they are out in stores yet.

On the multiplayer front, this game is a real treat. Let’s say that your friend has one of the older games in the series - once you link up you then have access to 50 songs that you both can play together. This mode has both a competitive mode and a cooperative mode so there will always be fun to have.

Since most games in this series rely on repetition you can expect to get a large amount of gameplay from the game, and the career mode alone should take quite a few hours. The only downside to this repetition may lie in the fact that there are only 28 songs, which means you better love those 28 songs, as you’ll be playing them a lot. However, with four levels of difficulty, unlockable characters, unlockable guitars, and unlockable clothes, there's no shortage of new challenges. This wide array of unlockables is merely cosmetic, and will take forever to get if you plan on being a completist, so it may not be totally worth it.

Guitar Hero On Tour - Modern Hits is a great game on the Nintendo DS, and I definitely would recommend it. Granted, this was the first game in the series that I got to try, so seasoned veterans may see it as just another version of the game that they have already played. While some may not be into the “hipster” music that it has, I can definitely say that the Guitar Grip is a beautiful idea and really surprised me. To get the Guitar Grip the initial price may be a bit steep for a DS game, but then you have multiple titles you can sink into like the first “On Tour” and “On Tour: Decades”. While the people over at Red Octane haven’t taken too many chances with the series and have pretty much changed the songs and little else for all three games, this game does employ the new take on the career mode (fan requests to make it less linear) to keep you coming back for more. All other guitar games on the DS are roadies compared to this series.