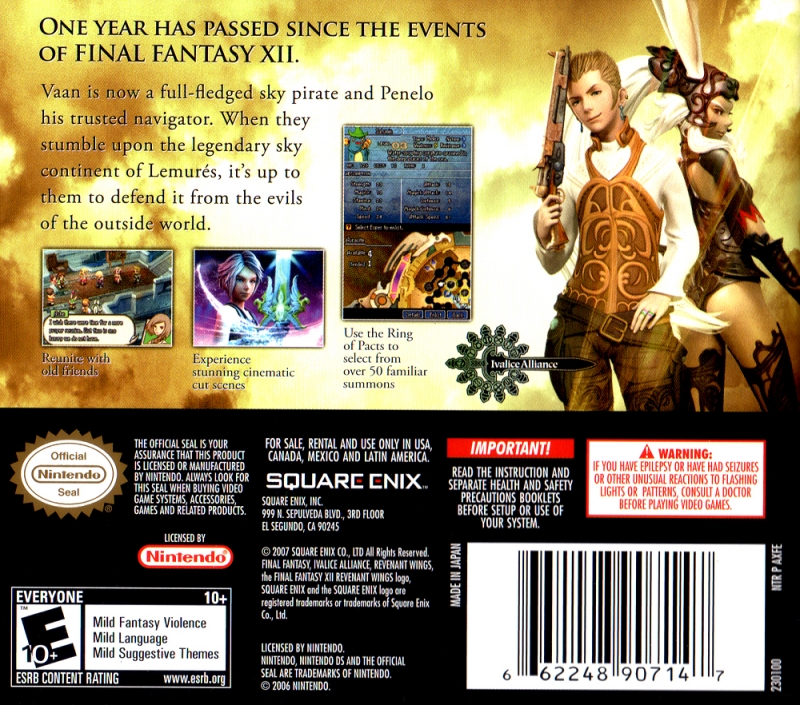 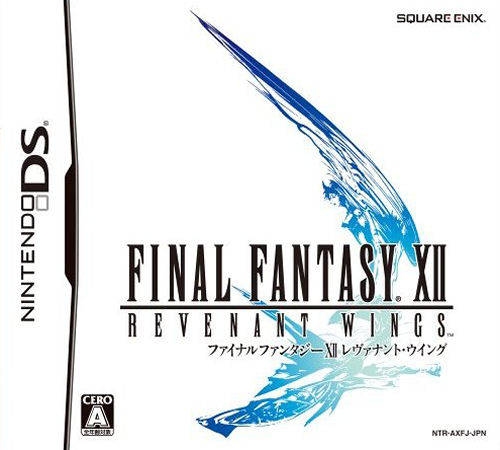 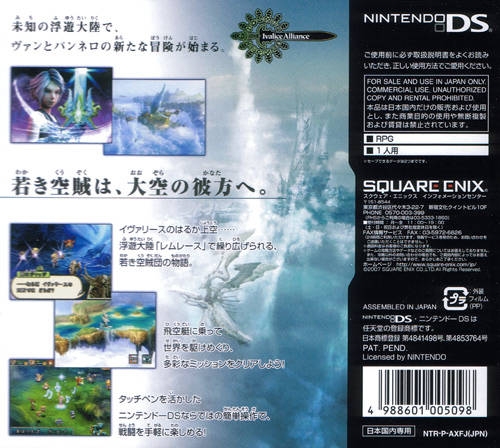 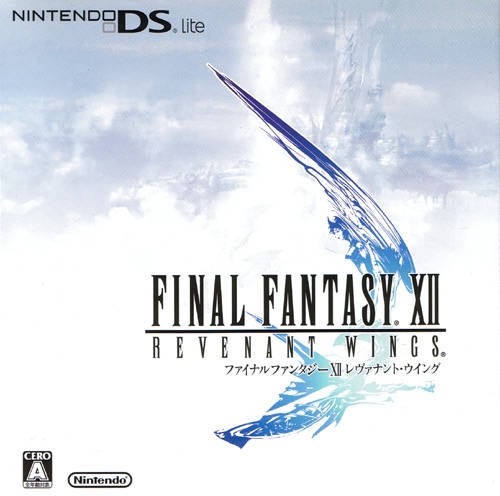 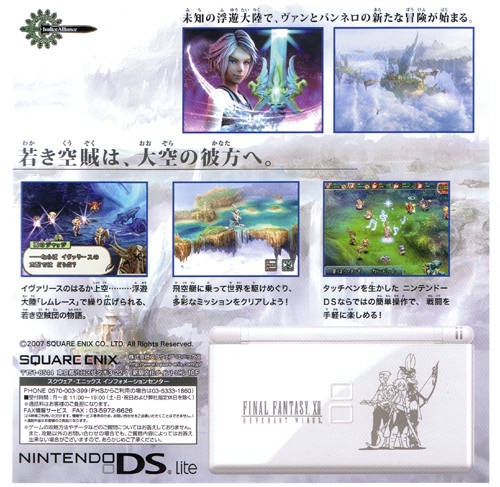 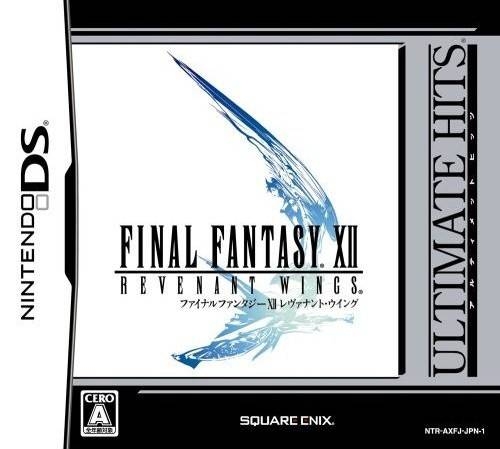 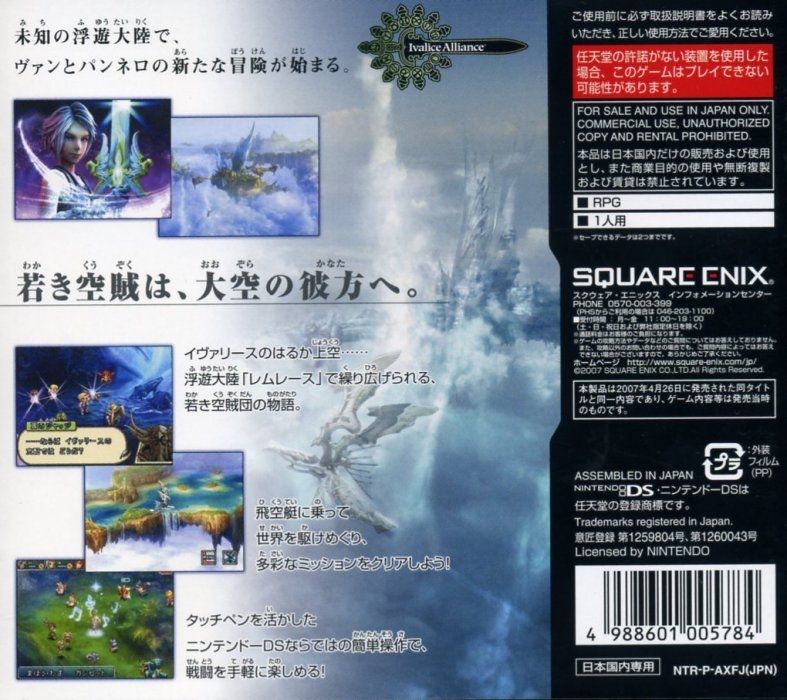 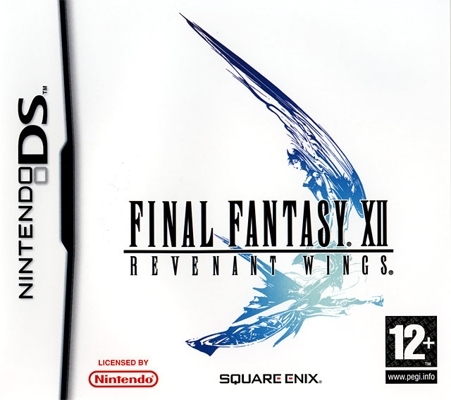 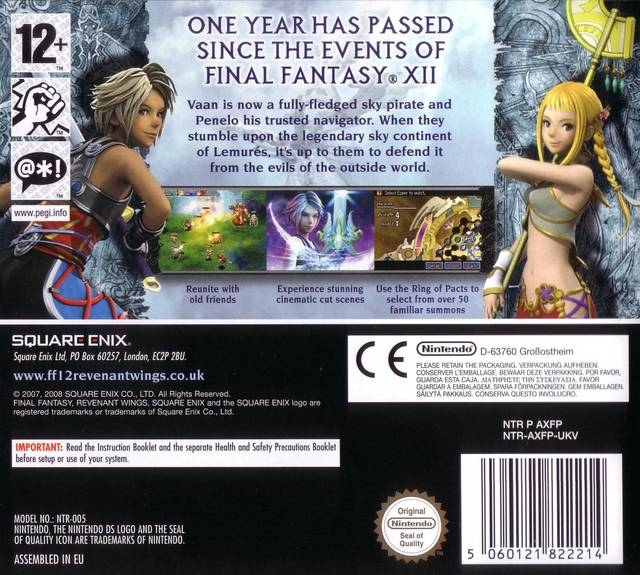 Overall Square-Enix delivers a great RPG that continues from the FFXII experience.

Final Fantasy XII: Revenant Wings continues the story from Final Fantasy XII on the Playstation 2 and brings a solid blend of action RPG and real-time strategy to the Nintendo DS. While the game ends up being more action than strategy most of the time, the experience is very enjoyable and proves to be yet another great game from Square-Enix for the DS.

Revenant Wings is somewhere between a spinoff of and a sequel to the main title on the PS2, and the story picks up right where the previous game left off. You'll take control of Vaan and Penelo to start and come across a number of both new and familiar characters as you progress through the game. The story is entertaining and engaging and will definitely motivate you to keep moving forward in the game. While the narrative is told entirely with text bubbles, it is accompanied by a ton of fantastic CGI that can either span both screens or run a separate video on each screen. Square-Enix is often known for their great CGI, and they do not disappoint here as they continue to put themselves at the forefront when it comes to pushing the DS's technical capabilities.

The art style and the music for the game are both classic Final Fantasy fare, and neither disappoint. The in-game graphical fidelity is quite good for the DS, with 3D environments combined with charming character sprites. There is never any slowdown except in the most intense and unit-heavy battles, but you will notice that the characters become very pixellated during the close-ups of some of the in-game cut scenes.

Technical presentation aside, the real unique experience here is in the combat. You'll have up to five main characters at your disposal to lead your army into battle, and each of these characters can control a number of summoned espers -- up to five different ones in each battle (selectable beforehand). The fighting takes place real-time, though the action is pretty slow and at times feels rather similar to the action RPG-style combat in the main game.

You'll have three different types of units -- melee, flying, ranged -- and each one has an advantage over another in rock-paper-scissors fashion. Ranged units are great at sitting back and shooting down flyers, flying units excel at swooping in and harassing the melee fighters, and the melee units are best at charging and beating down the shooters. There are also a subset of ranged units that act as healers. Your party generally starts off with 10 espers, evenly divided amongst your leaders, and on most maps you can augment your party via summoning gates. These gates must be captured before they can be used -- you can also capture enemy gates -- and you are limited to a certain total value for how many espers your party can hold.

You're given a top-down isometric view of the action on the touchscreen, with a fixed camera. The combat controls work rather well, allowing you to use the touchscreen to select individual units, or drag a box to select multiple units. The top of the screen has icons for each of your leaders that you can tap to select their entire group; a second tap will select just the leader. Once selected, a simple tap on another unit or object will result in the default interaction -- attacking the enemy, healing an ally, capturing a summoning gate, etc. The bottom of the screen has a menu for using abilities, summoning espers, etc.

The top screen shows a map of the combat area with icons for each unit and object. By holding L or R you can swap the two screens and tap on the map to switch your view to that location, but generally this process isn't really fast enough to offer much advantage over just scrolling with the D-pad or the stylus. Overall the interface works well and keeps your view clutter-free to focus on the action, and the controls are mostly effective while offering a great deal of speed in control. Unfortunately the units move and take action rather slowly, which gives you time to think and execute commands but can also be agonizing if you're trying to move part of your party across the map to deal with an enemy capturing your summoning gate.

Each of your characters and some of your espers have abilities that can be activated during battle. One of these abilities can be set for the AI to use by default using the gambit system -- again reminiscent of the main FFXII. The gambit system is actually quite useful, since the units can get so clustered on the screen that it's difficult to select any one individual to issue orders. You'll also get super-abilities called Quickenings, which charge up during the battle and, when unleashed, dish out a bunch of damage or offer some kind of sizeable stat boost.

Unfortunately because of these factors the combat often boils down to issuing mass orders to your entire army to attack enemy clusters and letting the gambits do their work rather than micromanaging and strategy. The extent of your army management will likely be cycling through each of your leaders' parties, executing sub-group commands to take advantage of unit type matchups, using your Quickenings as they become available, and using Penelo to heal or revive specific units as needed. The result is a game that is nicely streamlined and action-oriented, but a bit light on the strategy.

The problem with the simplicity of the combat system is further exacerbated by the rather stupid enemy AI. Most of the time they will simply sit in small clusters, all of a single unit type, and wait for you to come wipe them out. Many maps will have single units scattered about the map, following a scripted path, and when you have 5 leaders and 10 espers it's pretty easy to take out these single units one at a time as you go along. Occasionally you will get maps with summoning gates, where the enemy leader will take a group and attempt to capture your gates if you leave them open, and they will take advantage of type matchups at times, but overall the strategy here is pretty basic. The variety comes mostly from the terrain and layout of the maps themselves, which are usually linear, and from occassional triggered surprises that summon in groups of enemy units.

Outside of a few of the side missions which have you faced off against severely over-leveled, over-powered espers, you probably won't have too much trouble getting through the battles successfully if you're leveled up appropriately and you don't let your party get too exposed. Your party levels won't fall too far behind the enemy if you go out and complete each side mission, and complete each map once more after clearing the story chapter on it. You're occasionally required to use certain leaders in certain battles, but you can pretty easily overcome one underpowered leader if you prefer to only use a favored set.

Revenant Wings really does seem more like an RPG than an RTS most of the time, and it comes with most of the bells-and-whistles that you would associate with the former genre. There's an extensive inventory system, with items and money found on the combat maps, as well as ingredients and recipe books for crafting your own weapons. If you simply harvest everything you see during each battle, you won't have too much trouble looking for a particular item or running out of money. You will also find an item called auracite, used to unlock new espers that you can use in battle. The interface works pretty well, allowing you to quickly access anything you need without getting in the way. It would've been nice, though, if you could see the equipped status of an item in the shop as compared to what you currently have equipped, rather than just the raw stats.

As mentioned, your leaders will gain experience and level up with each battle, and though you obviously gain a lot more a successful mission, you still get a small amount if you lose and for leaders who don't participate in the fight. You will also open up side missions to complete as you talk to other characters, with the rewards varying from new items and money to the ability to use powerful espers in battle.

Overall Square-Enix delivers a great RPG that continues from the FFXII experience. Those looking for an in-depth strategy title will be disappointed, however Revenant Wings provides a good introduction to the genre for those less familiar with it, and a fun action-oriented feel. While there's no multiplayer or real replay value, there are about 50 main missions and an equal number of side missions that'll keep you entertained for over 30 hours. Ultimately the end product is an interesting blend of genres and winds up being one of the better games available on the DS.