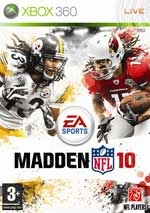 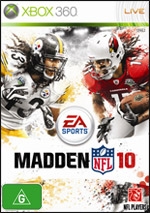 A Madden meltdown? Or gridiron greatness?

John Madden may have retired but you can rest assured that his best-selling videogame franchise never will. For better or worse, Madden 10 is here and there is nothing you can do about it but sit back and enjoy the proceedings. As with all yearly sports titles, there are a number of updates to Madden, and this year they do more than just fill out the back of the box. Along with the obligatory presentation upgrades, there are a few game-changing features thrown into the mix, including the much anticipated gang tackles and online franchise mode. The result is not only a better experience than last year, but also what may be the best game of (American) football on the current generation of consoles.

First things first, Madden 10’s visuals are impressive. On the field, the upgrade from 09 may seem minor, but once the game is in motion it becomes clear just how much more detail there is to be found. The stadiums all look great, as they brim with life to the rhythm of the match-up taking place. It genuinely feels as if you are in control of your own NFL broadcast. There are new camera angles present giving you a glimpse of the off-field antics. You’ll see the quarterback talking from the sidelines, coaches throwing a fit after a turnover, and diehard fans jumping up and down in the stands.

Character models and animation are at the best they’ve ever been. Ever wanted to see how Peyton Manning’s brow furrows when he’s annoyed or how Giants coach Tom Coughlin looks when the defense gives up a 60-yard touchdown? You will get that and so much more. During the game, the players movements are more lifelike thanks to the dynamic “Pro-Tak” animation system (which we will get to later). Running, passing, tackling, catching all look far more versatile than the static animations of Maddens past. When it rains, moisture will splatter and accumulate on the screen convincingly. EA Sports also boasts a superior level of detail that accurately renders leg warmers, Super Bowl patches, and more if you are obsessive about such things.

A few drawbacks keep the graphics from being downright awesome, sadly. Most of these issues have to do with the many scenes added in to authenticate the broadcast feel. Sure seeing the referees bringing the chains out to determine whether or not you reached first down is nice the first few times, as is seeing players chest bump each other after a sack. However, these happen so often they become downright annoying and have the adverse effect of pulling you out of the game. Like clockwork, you will be able to predict just when these will flare up. There is also a glitch where it will take a few seconds for facial textures to load up on a quarterback’s face from the sideline and the phone he was speaking on will suddenly disappear. A minor case of slowdown pops up every now and then but generally the game runs smoothly at a consistent frame rate.

The audio is not as massive an upgrade over last year's as the visuals are. Chris Collinsworth and Tom Hammond return to provide commentary in what can be described as an 'okay' performance at best. Aside from some of their comments being cloyingly recycled from last year’s game, there is just nothing natural about their execution. Expect to hear the same boring observations multiple times throughout a game, and silence at points that obviously need commentary. Some of their new audio is interesting, and there is a lot of it, its just lacks the necessary amount of flare.

Other components of the audio aren’t quite as bad. The roar of the crowd is convincing. Tackles still make a satisfying crunch sound and you will even hear the players themselves shout more lines of dialogue than before. The soundtrack is strong, consisting of the usual mish mash of head-banging tunes and street injected hip-hop tracks. Songs include tracks from Nirvana, 2 Pac, Beastie Boys, Nas and more familiar artists. To me this is the best soundtrack featured in Madden since 2005, but of course, it is debatable.

Now it’s time to get down to the nitty-gritty that makes or breaks Madden every year, the gameplay. Of course, not much changes in Madden from year to year, essentially coming down to striking the balance between refinements and adding worthwhile features. The basic tenets of football still apply. Throwing straight into coverage will inevitably lead to interceptions and the running game comes down to picking the best routes. It is these timeless principles that make Madden so fun to play as you deconstruct the opposition’s game plan and attack mercilessly with your own. An overall slowdown in the gameplay leads to much better pacing and less unbelievable turnovers and receptions than before.

A number of new moves are available, and pre-existing ones have been tweaked. Quarterback avoidance maps evasive moves to the right stick and even though it can help you out of certain spots after the pocket has collapsed, inevitably lead to a disjointed passing situation. Jukes and breaking tackles feel better than ever but make tackling feel clumsier overall. Defenders will constantly fall to the ground after tackles that should be definite and lead to massive runs.

The two big on-field changes this year are the aforementioned gang tackles and the fumble pile up minigame. Thanks to the “Pro-Tak” animation system, up to nine players can be involved in a takedown. The movements are convincing and genuinely feel like something you would witness in a game on Sunday. On both offense and defense, you have just the right amount control over the movement of the gang and thankfully, it only occurs when appropriate. I am not quite as enamored with the Fight for the Fumble mechanic. It, too, only flares up when appropriate but when it does, a button mashing minigame almost equivalent to a quick time event will pit the opponents head to head. The ball is more likely to end up with the team that reached it first or has the most players in pile so sometimes, it seems redundant to mash away your thumbs with little to show for it. However, it does work as advertised so I can’t really fault it for that.

Franchise and Be a Superstar modes both return in almost top form. New to the Franchise mode is the Extra Point weekly show. Here you will be brought up to speed with everything going on during your franchise. It is well put together and does a fine job detailing how the season is going overall. Fran Charles and Alex Flannigan, whose only reason for being in the game is to make the commentary, sound fantastic in comparison to the host of the show. Hopefully an overall audio upgrade is in the works for next year’s game.

During Franchise Mode, you will get constant updates on trades, injury report, etc via your hub. The calendar setup is gone meaning no scheduling practices before a big game. It’s essentially the same mode you’ve sunk hours into from previous years only with a lot more detail that extends beyond the first year. One of the more controversial additions this year is the Madden Shop. Here, using real life currency, you can pay for in-game perks to beef up your franchise. For example the ONE MORE YEAR item will give you the ability to keep one player out of retirement for the price of 2 dollars. I'm personally not a fan of the set up because I cannot see myself using it, though some may be grateful for the option.

Superstar Mode is still fun, giving players the chance to guide a created player, NFL rookie, or a player imported from this year’s NCAA title throughout their career. You’ll get the most out of this mode by playing as a quarterback, running back, or linebacker, but of course, all positions are available. The practicing during Superstar Mode will have you run the same play repeatedly with no end. Your stats don’t improve after practicing either, making it even more puzzling.

Online Co-op and Franchise highlight the multiplayer options available this year and both work well in my experience. Online Franchise works the same as the offline does with up to 32 participants over a ten-year span. The Co-op has some faults, like giving the host the lion’s share of control such as picking plays and playing QB. The camera angles get a bit iffy as it zooms in on any player you choose to control. Overall, the online is a lot more stable than in previous iterations.

Value is a tough thing to evaluate concerning a yearly sports title. There is a lot to do, but you are only going to play it for a year. Aside from the career and online modes, there are minigames and Madden moments that will place you in memorable moments from the 09 season. Of course just playing together with a couch full of friends never gets old and will keep you fighting for every yard long after the post-game highlights end.

Madden 10 does not represent the best that football video gaming can be, but takes strong strides towards that milestone. If not for the lacking audio, the presentation overhaul would have been stunning rather than just impressive. What counts though is that the gameplay is strong and there is plenty of game to go around. So enjoy it while you can, Madden fans - the countdown to next year’s title is ticking.