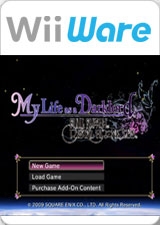 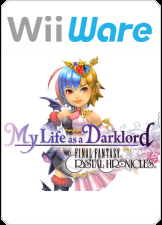 The term "tower defense" has never fit a game so perfectly.

You control Mira, the daughter of the Darklord who was the antagonist in the first game. With the help of your tonberry minions you decide to go against the peaceful wishes of your old man and take over the world one kingdom at a time. You try to make everyone in the world your minion by flying around in a magic tower from place to place and fighting any adventurers you encounter. The story ends with a sickening morality lesson and in general was kind of painful to read. When the narrative was shooting for comedy it worked fairly well but the second it switched over to being serious it became painfully predictable and sappy. The key to a great comedic game is to never let up, even when you’re trying to teach a moral you do so in a tongue in cheek manner. Sadly My Life as a Darklord did not take this to heart so the serious sections of the storyline get in the way of the far better realized comedic portions.

As you travel from place to place in your tower you are not actually going to leave it to kick the butts of the local would-be heroes, but instead you allow them to come to you. What follows is a tower defense game (one of the most literal iterations of that genre). As adventurers try to climb to the top of your tower to destroy the crystal at the top that houses your father, you must set up your tower to try and stop them. Each stage has a certain number of adventurers that you will have to fight and defeat in order to win. Beat all the adventurers without losing your crystal and the stage is over. Controls are quite simple; you turn the wiimote horizontally and use the d-pad to work through menus, with '2' being the button to accept a choice and '1' being the button to go back. You use these controls to build up your tower with more floors and summon monsters to occupy those floors through a simple menu system. Whenever you bring up the menus the action pauses so there is never any real rush behind your actions.

The strategy in My Life as a Darklord is dominated by a simple rock-paper-scissors formula. Magic things kill melee things, melee kills ranged, and ranged kills magic. There are some units that are generic and step outside of the formula, as well as healers that also have no specific weakness. Each floor you build costs you resources which you start out with at the beginning of the stage, and you are rewarded with more resources for each adventurer you defeat. After you build another floor you can use that same resource to summon monsters inside each floor. Each floor has four spaces, with at least one being taken up by the artifact that comes with the floor. The artifact is like a monster with certain abilities that takes up spaces that could otherwise be occupied by more monsters. If it is killed the entire floor will be destroyed.

Adventurers will climb the tower, and if there are monsters on a floor they will stop and fight them for a certain amount of time dependent on the stats of the adventurer. Sometimes adventurers will come in groups, but only one can fight on a floor at a time and if a floor is occupied by someone else the adventurer will skip that floor and continue climbing. This makes it important to take into account the type of adventurers and group size that you are going to go up against in any stage. Before the stage you are only given general information on the total number of adventurers you will face, as well as their general class, so you will probably have to redo some stages because you did not prepare correctly for what was coming.

After you beat a stage or lose after beating at least one do-gooder you are rewarded with experience which you can use to upgrade your monsters or increase the maximum number of floors you can put on your tower. Upgrading monsters lets you increase their level after you summon them, which increases the damage they do, health they have, and sometimes gives them special abilities.

Overall the gameplay is fun, and there is enough strategy involved in beating the various adventurers that you will have to put some serious thought into how you will defend your tower. I did, however, find the lack of planning annoying. You won’t know what specifically is coming at you until they arrive at the tower and since you have no way to get the resources you spend on your tower back you can sometimes lose a stage because you didn’t plan correctly for enemies you had no way of knowing about beforehand. There is also a disappointing lack of variety in the monsters you can summon, as there are only two for each of the five types of monster, making ten in total. Based on the prominently displayed downloadable content store in the main menu and the obvious blank spaces in the monster list, this lack of variety was most likely by design, but it is counteracted somewhat by a surprising variety in the types of floors you can build.

Presentation is around par for a Wiiware title for the most part. The characters are well designed and there are not many technical flaws except for a decrease in framerate every now and then. As I mentioned previously the story is pretty bad, even for the standards of video games. The music is light-hearted and fits the title well, but started to feel overly repetitive with time. Voice acting is not present, instead there are yelps and noises from people when they talk which can get annoying.

My Life as a Darklord lets you pick stages from a map as you work through the story. My first play through took me nine hours, but this included beating all of the optional stages I came across, so it is plausible that the game could be beaten in seven or eight hours. There were, however, some stages that opened up after I beat the game that I did not work through, so if you really enjoy the game you could get more than nine hours out of it for a mere ten dollar investment. Only one difficulty level means there is not a lot of replay value, but if you just want to continue upgrading your monsters and tower you can replay any stage that you have beaten. There are unlockable stages you can pay for if you really love the gameplay, but they all cost extra.

The first Final Fantasy Crystal Chronicles Wiiware title was a surprisingly great game, but I am afraid I cannot say the same for its sequel. My Life as a Darklord has some interesting strategy, and fun gameplay, but the horrible morality in the story and overall lackluster presentation brings the game back down from greatness to just being pretty good. If you are looking for a decent tower defense game with some RPG game mechanics I suggest giving My Life as a Darklord a shot, but don’t buy it just because you enjoyed the first game.