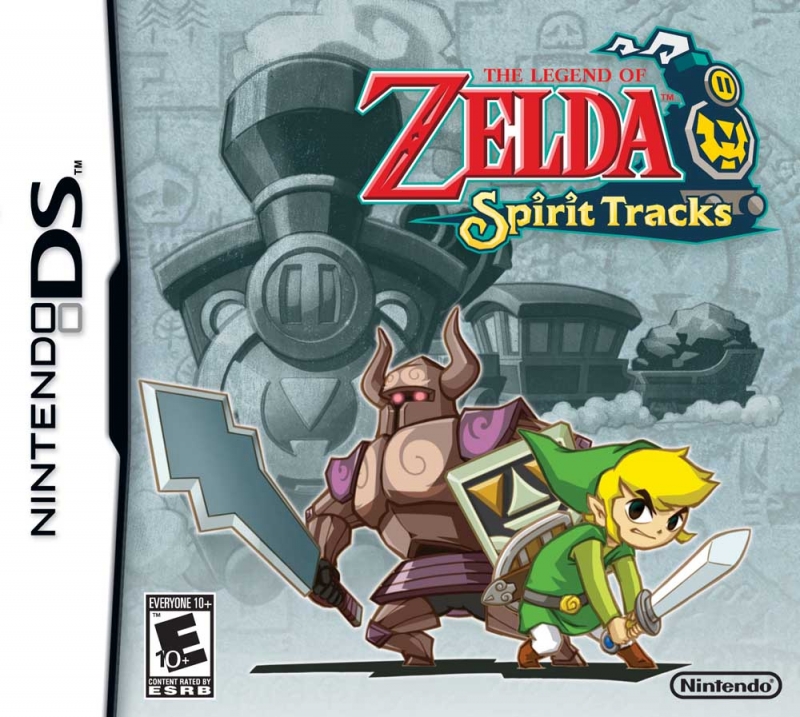 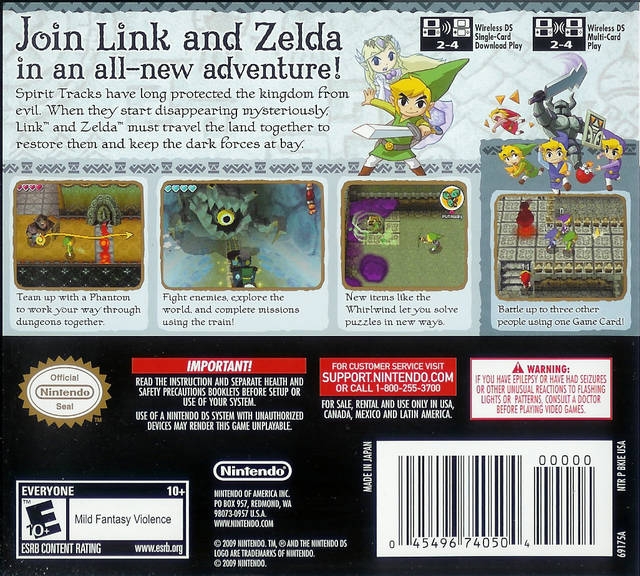 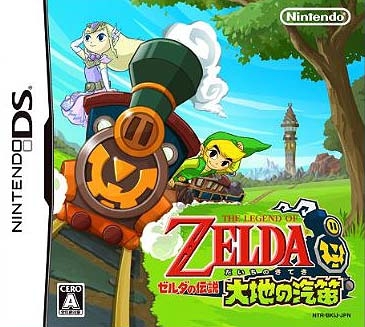 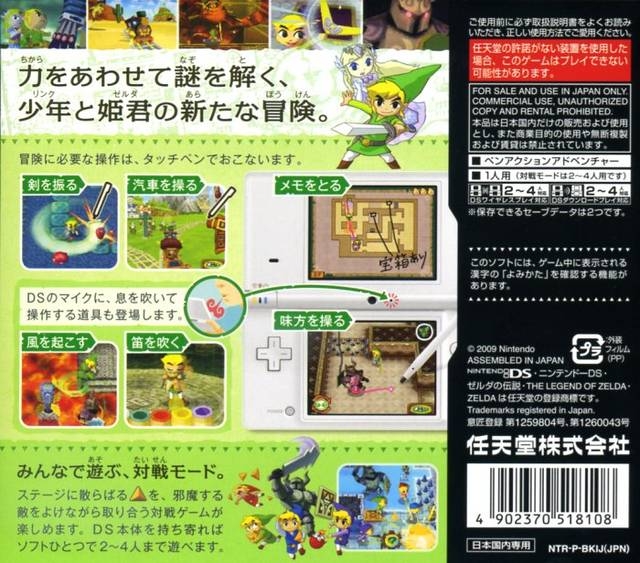 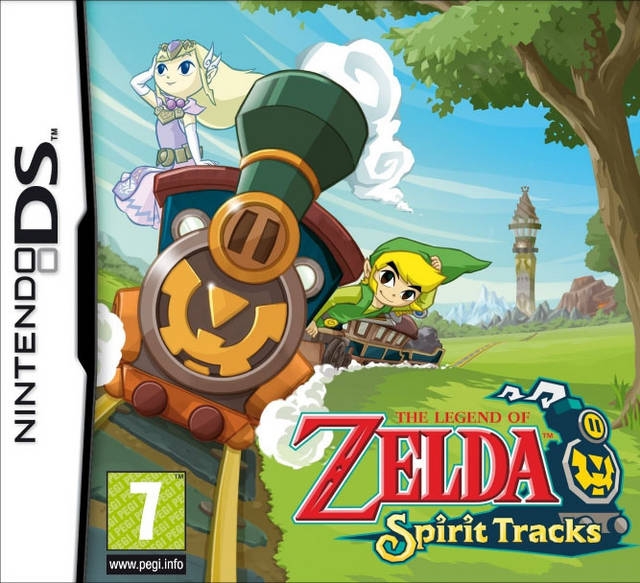 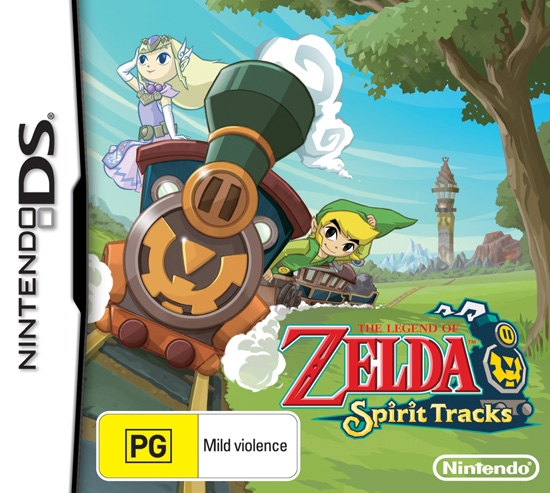 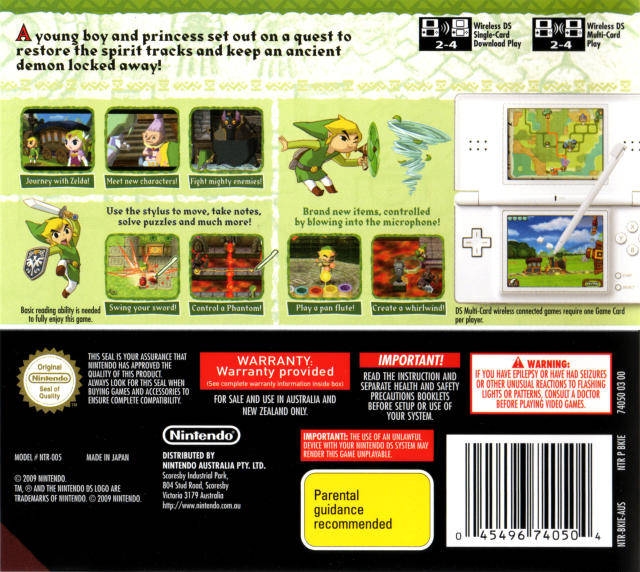 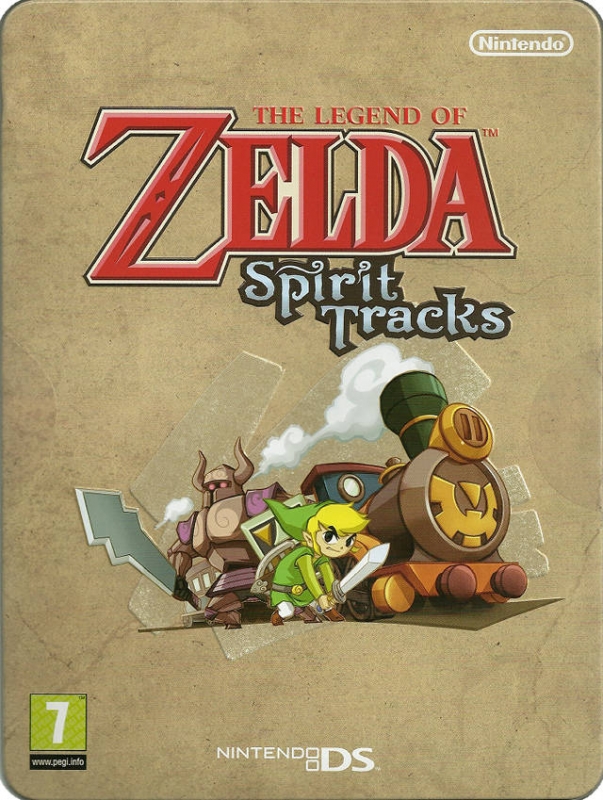 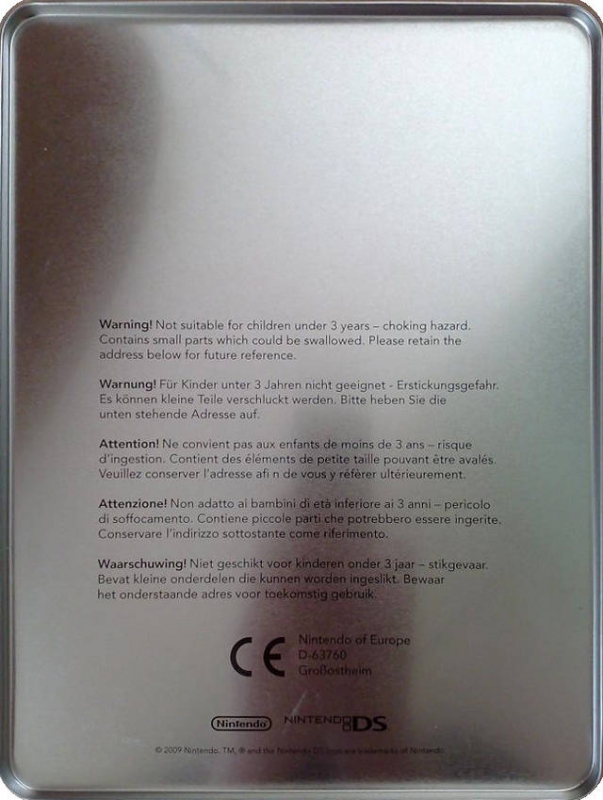 How does Spirit Tracks measure up to its predecessors?

Apparently, Spirit Tracks is set at least hundreds of years into the future, perhaps thousands. This notion stems from the fact that the Kingdom of Hyrule is no longer a flooded landscape peppered with many islands, but instead has been transformed into a kingdom with four different realms. The four realms are pretty generic and uninspired: Forest, Snow, Fire and Water. Across the land of Hyrule are the mysterious Spirit Tracks, the origins and purpose of which are unknown. These tracks are your only means of conveyance across Hyrule. They are not as restrictive as it would seem, but the train system does limit overworld exploration, which is unfortunate in a Zelda game.

The Hero, of course, is Link, or at least a descendant with the same name. This Link is no warrior or small wooden village orphan, instead he is a train engineer who is embarking to Hyrule to seek his Engineer License directly from the Princess herself, Zelda. Once that task is complete the real adventure begins. I’ll sum it up without too many spoilers. Corruption within Zelda’s administration is found and a plot to unleash an ancient evil is executed. This results in the Spirit Tracks disappearing and Zelda’s body being taken as a vessel for the ancient evil lord, Maladus (even his name emanates evil). Link teams up with the astral form of Zelda that only a few can see and sets off to restore the Spirit Tracks and defeat Maladus.

The story is actually pretty good. Like Midna, Zelda makes an interesting and lovable companion on your quest. The character interaction between the two is cutesy and at times funny. There also seems to be a tinge of romance in the air - go Link! Spirit Tracks has a darker, more Majora’s Mask-like feel than any of the other two titles in this new cel-shaded universe had. The villains are maniacal and the back stories hint at a tragic past. This plot is a welcome, unique aside from the normal Legend of Zelda storylines.

The graphics and music are the best a handheld Zelda has ever had, and among the best to grace the DS. The cartoony design pioneered in Wind Waker returns and is as expressive and adorable as it was on the Gamecube. Monsters have a large scale which is amplified by the dual screens. Textures are clear and beautiful. On the other hand, the music is whimsical and true to the Zelda series. The Spirit Flute has that same haunting and memorable sound that the Ocarina did in Ocarina of Time. This title really shows how intrinsic music is to the Zelda series.

Zelda games are known for stellar gameplay and for having a plethora of mechanics to play with. Spirit Tracks is no different, but some of the supporting mechanics are not up to par. The gameplay can be broken down into several categories:

First, the controls. The controls are the same full touch screen controls that are featured in Phantom Hourglass, with major improvements such as the double tap to roll. The whole world is traversed using the stylus. This allows for easy to control running and walking. Attacking is done by tapping an enemy or swiping the stylus. It all feels natural and responsive. However, even with these improvements there are still frustrations at times. These will include a few isolated instances of Link jumping off a ledge inappropriately or not grabbing a grapple point correctly. Also, the Whip item is really enjoyable to use, but the throwing is fairly unwieldy and sometimes the aiming is not spot on. The more frantic the action gets the more the controls can be a liability. For example, the button that controls a Phantom is really tiny and in heavy action moments can be easily missed, reverting control back to Link. In boss battles and timed sequences this can be a killer.

Navigating the overworld is also a mechanic that is not well thought out. The train is the show piece for this game and in less than ten minutes you will find how lonely and barren the experience is. There is no way to explore the overworld for secrets since you are tied to the train tracks. While traversing the overworld there is nothing to pass the time with except shooting at rocks, enemies, and trying to catch a bunny. The bunny catching minigame happens to be an insufferable low in Zelda minigame history. The worst part of the overworld is that there are times when the game will force you to take the long way to your destination by placing bomb trains in your way. Aside from the dungeons, there is just not much to do in this game. A Legend of Zelda with such a minimalistic approach to exploration and discovery almost seems sacrilege.

The dungeon crawling is where all the negativity disappears in a puff of smoke. Each time you step into a dungeon you are in for a treat. All the dungeons have their own theme and personality; each time the rules seem to be tweaked to throw you off your game. The puzzles are also very inventive. Veteran Zelda players may think that they have seen everything, but Eji Anomua has some sobering news for them. The puzzles range from easy to epiphany-inducing mean. This results in a very satisfying adventure experience that makes up for what the overworld lacks. The dungeons seem to be what the development team focused the most on and Spirit Tracks has some of the best in the series. Spirit Tracks, thankfully, has more than ten different dungeons, each fully realized and satisfying.

The ability of possessing Phantoms with astral Zelda also adds a new gameplay dimension. Having two controllable characters creates many new puzzle opportunities while navigating a dungeon. Some of the more sadistic puzzles will utilize this fact. Also, there are several Phantom classes, each with different abilities. This again comes back to the puzzle and level-design. There is a sense of camaraderie between Zelda and Link that transforms what is usually a solitary experience into a team effort. In this game you do not feel alone. I can’t emphasize enough how amazing the dungeons are and how much Zelda adds to your enjoyment of them.

For the most part, each boss battle is as well designed as the dungeons. One or two may seem contrived and familiar, but most of them are fresh and enjoyable. A few of the bosses are just epic, especially the final one. Also, for some boss battles that sense of camaraderie returns as Link and Zelda battle it out as a team.

Aside from Zelda’s amazing Alphonse Elric impersonation, you obtain many other tools to help you survive dungeons. Some are familiar and have become staples of the series, such as the arrow and boomerang. Others are new and add a fresh new take on puzzle solving and defeating bosses. This melding of old items and new ideas seems to be a trend in Zelda games, and it works well. I’m going to go against the grain here and list the mic mechanics as an asset to the game. Playing the Spirit Flute is enjoyable as you blow into the mic and I couldn’t see the Windmill working any other way. The mic is used very conservatively throughout the game and it is responsive.

Spirit Tracks has decent value. The side quests are kind of bland and usually involve carrying a person from one town to another; however, there are plenty of them. There are different collectables and secrets to find throughout the game. There are bunnies to collect that trigger various awards and stamp stations to reach. Obtaining stamps from all locations yields some new combat abilities. Escort quests will award you with force gems at times. These will unlock new places to go to on the overworld map. This will become essential if you wish to gather all of the collectables in the game. Also, there are challenges and trials to face that will test your skills and reward you accordingly. The games core value comes from its overall length, which clocks in at 25 hours, and the dungeon count, which is more than 10. Finally, a handheld Zelda game with a satisfying number of dungeons.

In additon to collectables, side quests, and a large number of dungeons, Spirit Tracks also extends value with a single-cart mulitplayer and Nintendo Wifi abilities. The multiplayer is very basic and most will disregard it as nothing more than a nice-to-have added feature. Tag mode is a collectable swapping feature that lets you exchange three items with other players. It runs in standby and will make connections with nearby DS systems. It's random and you never know what you will get, but that actually makes it more interesting. It's like opening a new present every time. You can also remove the randomness by just coordinating a swap with friends locally.

The Legend of Zelda Spirit Tracks is an essential game to own on the Nintendo DS. It has some of the best dungeons and puzzles in the series’ storied history. This is the first Zelda game where the Princess herself joins you on the quest; adding companionship in much the same way as Twilight Princess did. This game evolves the groundwork laid by Phanthom Hourglass and in all ways is superior, but the lack of exploration and a barren overworld is disappointing. Spirit Tracks is the type of game that proves that a franchise as old as Zelda can find new directions and ideas.