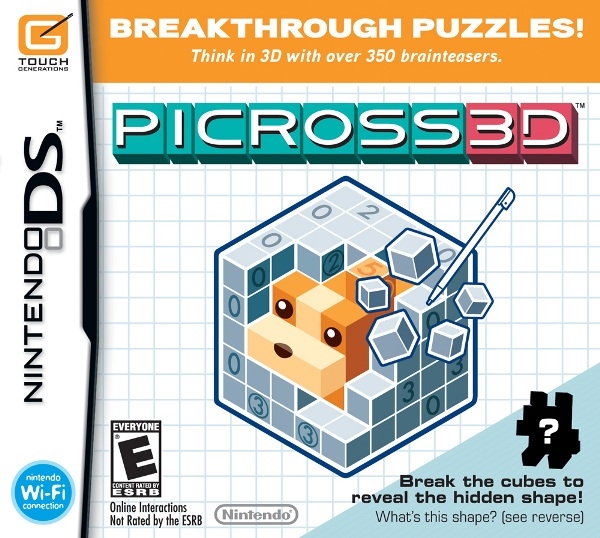 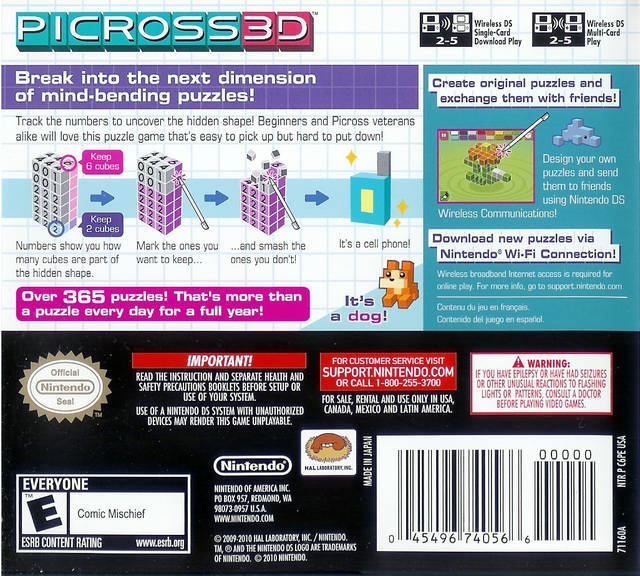 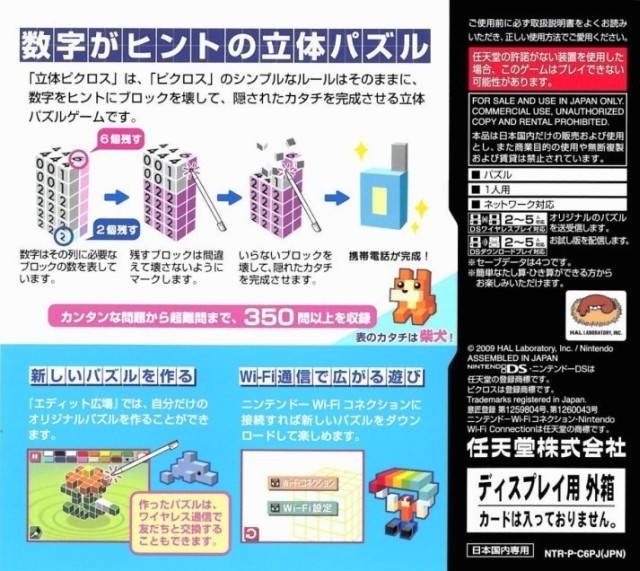 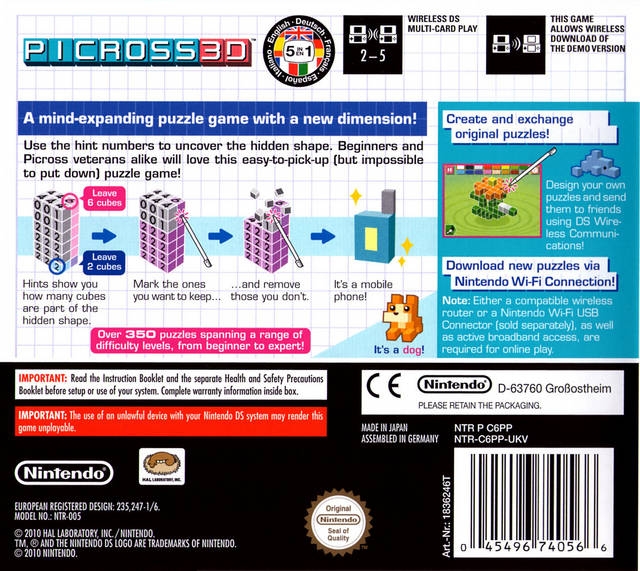 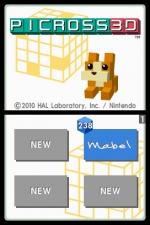 The original Picross DS (the name is a portmanteau of picture and crossword) was launched in May 2007 and presented us with a surprisingly captivating game mechanic that soon captured the hearts of puzzle lovers all over the world. The sequel, Picross 3D, introduces us to a tridimensional environment which adds new complications and possibilities to the fun.

The pictograms (or nonograms, as they are often called to honor their inventor Non Ishida) are puzzles which use numbered grids. In this type of puzzle, each vertical or horizontal series tells you how many of the squares in a row have to be colored in order to slowly reveal a figure of a certain object.

In Picross 3D, each nonogram consists of a large cube that is formed by smaller cubes, and some of these cubes have numbers printed on top. Using the marked cubes we have to figure out which cubes must be eliminated, and which must be kept. Thus, if the top cube in a row is labeled with a 0 the whole line will be eliminated. Cubes containing a four, for instance, indicate there are four cubes in that row that must be kept. However, if that four appears surrounded by a circle, those four cubes are not contiguous in the line but grouped in two sets. On the other hand, if those four appeared surrounded by a square, the cubes are grouped in sets of three or more. Players must deduce the answer based on the number clues marked on adjacent rows and columns to figure which you must eliminate and which you must color to solve the puzzle.

To prepare for the 3D puzzling adventure, the game includes a very thorough and extensive tutorial, which includes several training puzzles to practice and hone your skills. The player may feel compelled to revisit this tutorial several times when attempting to resolve the 350 puzzles (all categorized by difficulty and type) which are included in the game.

The game is played primarily with the stylus, although you have to use the D-pad to eliminate unneeded squares or to color in the cubes that remain. It’s important to note that if the player fails to press the proper direction in the D-Pad the on-screen figure just rotates up or down. On the other hand, in those cases where the figures are too big, or have several cubes of depth and which we are unable to manipulate, the game allows you to queue a cross section to look at the markings on the inner rows. This tool is indispensable in solving several of the tougher puzzles.

At the beginning of the game, only the most basic puzzles are available. This can be frustrating for those more experienced that would prefer to start at a more challenging level. Each level has eight obligatory screens that have to be cleared in order to pass, plus two bonus puzzles which become available once the previous eight are completed. The possible scores range from one to three stars in each level. The three star score is only achievable if you don't make a single mistake (a maximum of five errors are allowed), and finish the puzzle under the maximum time.

Each difficulty level has ten sub-levels. There are also ‘special puzzles,’ in which a single error resets the figure back to the start position, you have to solve the puzzle before a counter runs out, or the puzzle is presented in segmented parts (thus eliminating the possibility of deducing the end product and using that as a guide to the rest of it).

Despite the fact that the hints are often very helpful in solving the puzzle, there are frequent instances in which the game leaves you in the air, with little clue as how to proceed unless you fully understand the intrinsic logic of the game. Acquiring such an expertise requires hours upon hours of practice. In fact, on occasion even knowing how to pair the various symmetry axes isn’t enough, and you are forced into trial and error. If you fail, you may even have to start the whole puzzle over, depending on the situation. It isn’t a widespread issue, but it occurs often enough to be irritating

Aside from the starting batch of puzzles the game has a few additional options. The first of them is the Gallery, where all solved puzzles are grouped and displayed by theme. The Gallery also provides interesting educational material about the figures on display. If solving the 350 puzzles included in the package isn’t enough for you, the game also gives you the "My Picross" option, which has three modes that extend the replay value. The modes are Originals, DS Wireless Communication, and Nintendo CWF.

The Originals option allows the players to create their own puzzles. This is done by drawing the figure and saving it. The DS then automatically plots the squares and the needed numerical values and presents the drawing back in the form of a nonogram. DS Wireless Communication allows you to share puzzles with nearby DS owners who also have the game. The game also allows you to send a demo to your friends. Finally, the Nintendo CWF option allows you to upload puzzles to the Nintendo Wi-Fi Connection where they may be included in a series of theme-based contests. Additional puzzles will be made available throughout the year in themed puzzle packs via the Nintendo Wi-Fi Connection, giving you reason to revisit the game.

From a technical perspective, as is common with puzzle games, Picross 3D isn't very impressive. The backgrounds are immobile still-frame pictures, and the puzzles themselves are simply made of blocks. Once the puzzle is solved, the figure displays a short animation which range from mildly amusing to outright dull. The music is adequate, but not spectacular. A number of catchy techno songs accompany the puzzles. The truth is this game has no frills or ostentation; aesthetics are clearly expected to take a back seat in the experience.

One of the greatest attractions of Picross is that it can be played in short bursts. A simple puzzle can take as little as five minutes to resolve. This makes it an ideal game to play while waiting in line at the bank, while you pay the mandatory visit to the bathroom, or when you just need something to kill time while you fall asleep at night.

As in any good puzzle game, the central premise of Picross is extremely simple. In fact, ‘simple and addictive’ is possibly a good catch phrase to summarize this collection of 3D nonograms. Picross 3D is fun to play, easy to master, and has great replay value, making it a must own for puzzle-lovers.