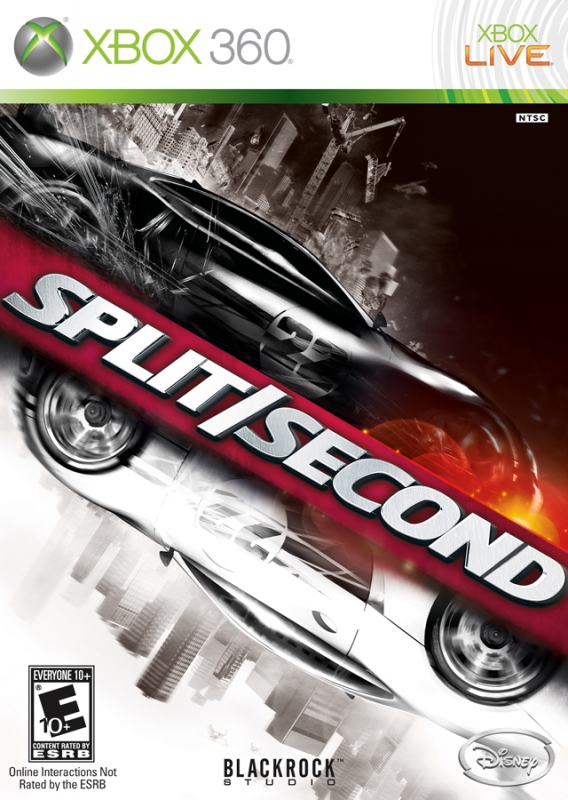 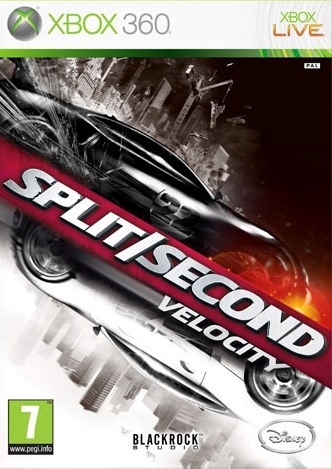 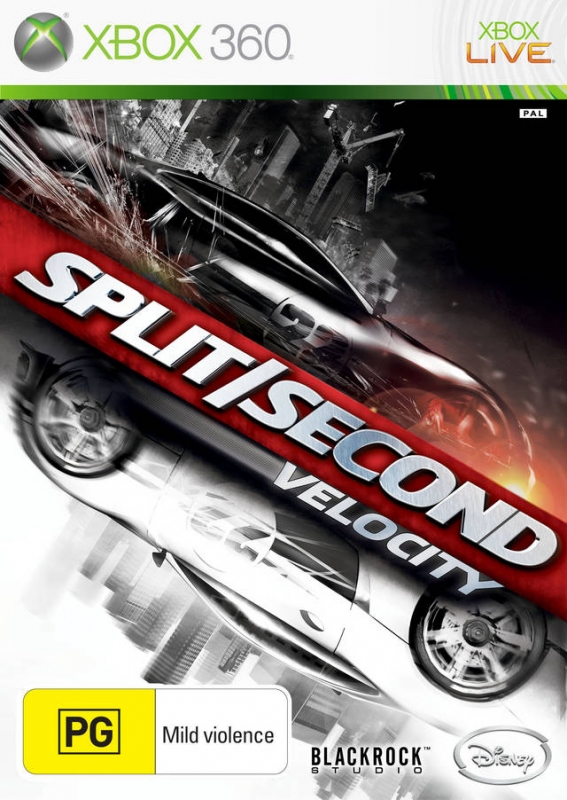 Is this the next big arcade racing franchise?

With the two releasing so closely together and sharing so many similarities, comparisons between Split/Second and Blur are inevitable. Both are pure arcade racers that borrow the vehicle combat elements most often associated with kart racers, but Split/Second’s method of delivering that combat is what sets it apart from both Blur and the kart racing sub-genre as a whole. Wrapped up in a pretty package, and containing almost all of the content one expects from an arcade racing game nowadays, Split/Second should have all of the components for an excellent racing game in the bag... it just doesn’t quite manage to pull it off.

Vehicle handling is solid, albeit nothing remarkable. In typical arcade racing style, cars are responsive and love to power slide. Drifting is a double-edged sword, however, because whilst it rapidly fills your power play metre (I’ll come onto that in a moment), it also slows you down quite considerably. So there’s a trade-off; if you want to utilise the vehicle combat system to get ahead then drifting may be the best route to take, but if you would rather use speed to reach the front of the pack and only utilise power plays as a bonus advantage, then you’re better off holding back on the gas momentarily or skirting along the side of the wall Gran Turismo-style.

Not that it will matter much if you do get to the front of the pack. ‘Why’s that?’ I hear you ask. The answer, unfortunately, is rubber-banding. Split/Second features some of the worst rubber-banding this generation, so much so that it even makes the races in MotorStorm look even-handed. Rarely will you manage to clock up a lead of any considerable distance, and even if you do it will be short lived, as the A.I. will rapidly close the gap to just a few seconds. A close, hard fought race is always a good thing, but when the A.I. has to resort to cheating and performing the impossible to do so, it is simply not enjoyable - it’s frustrating. To make matters worse on this front, there are no difficulty settings in Split/Second’s campaign, so you can’t even tailor the extent of rubber-banding to your own racing ability.

Put that complaint to one side, however, and Split/Second is a fun racer that most people will find enjoyable to play. Fast paced and exhilarating, Split/Second’s controls are accessible and it has a unique approach to vehicle combat. Instead of having weapons attached to your vehicle, the track itself actually becomes the weapon. You’re able to trigger ‘power plays’ at various points on each track, assuming you’ve built up enough power to do so. You acquire power in a number of different ways, from drifting and drafting opponents, to gaining air time and avoiding power plays that have been triggered by others. There are three levels to your power meter, giving access to three small power plays or one huge one.

Smaller power plays will usually allow you to destroy one or two opponents slightly ahead of you on the track (and yourself too, if you’re not careful). These are usually relatively small explosions on a part of the track. For example, a bus on the side of the road might explode and catch anyone nearby in its wake, or a helicopter might drop an exploding barrel on the track. You can also use your level 1 power play to access shortcuts. The bigger power plays require all three of your power slots to be full. These always involve large scale events taking place on the track, often resulting in total destruction to one part or another and thereby causing the track to morph and develop alternate routes. For example, a damn might burst, or a train de-rails. The devastation is always great to watch, doubly so if it happens to destroy the entire lead group of cars, allowing you to catapult into first place.

The power play system isn’t without its faults though. Because the power plays on each track remain constant and are tightly scripted, you soon begin to learn where these hotspots are on each track and what sort of event will take place there. In a way this is a good thing; by learning where they are and what they do, you can plan your use of them more effectively and also learn how best to avoid them when they’re used against you. On the other hand, it also means they become predictable and too scripted. Soon, the novelty wears off, and you’re left feeling that Split/Second is perhaps just an average arcade racer with a simple gimmick.

To add a little variety to proceedings, Split/Second features several different types of races. So as well as your standard and ‘Eliminator’ races (whereby the car in last place is eliminated every 20 seconds until just one remains), there are also ‘Air Attack’, ‘Revenge Air Attack’, Survival’ and ‘Detonator’ events. Detonator is a fairly standard time trial mode, with its key distinguishing feature being that power plays are set off as you race around the track, so the aim is to get the fastest possible time whilst dodging power plays. Survival involves racing around a simple track design which has trucks driving around it releasing exploding barrels; the aim here is to pass as many trucks as possible with your three lives. Finally, the two Air Attack modes involve racing around a track trying to dodge missiles. The key difference between the two is that in Revenge Air Attack you build up your own power meter and can ‘attack’ the helicopter firing the missiles. Whilst all of this helps to keep the novelty of the game going for longer, some of the events - particularly the Air Attack ones - have flaws which make them as annoying at times as the rubber-banding in standard races can be. In Air Attack, for example, placement of the missiles on the track can be such that it’s physically impossible to dodge the missiles, so you’re penalised for poorly thought through game design.

Split/Second is presented as a sort of reality television show, where you enter into races hoping to cross the finish line first and blow up a few other contestants in the process. But fear not! The story elements are thankfully kept to a minimum with just a few brief cut scenes set in-between the episodes (with accompanying cringe-worthy voiceover). Tacky premise aside, presentation is Split/Second’s strong point. The scale of the tracks is impressive, and the game is consistently polished, colourful and vibrant throughout, from the menu screens to the races themselves. Loading times are notably brief. The majority of the 12 tracks are distinct, with a fair amount of variety between power plays (but not entirely, as some are recycled throughout, such as the helicopter dropping exploding barrels). The explosions themselves are great to watch, particularly the ‘route changer’ power plays, as these always involve impressive acts of devastation.

That’s not the say that graphically this is a stellar looking game.  It’s good but not amazing, and it’s not without some notable downsides either. For example, the cars look fantastic at first glance, but you come to see this as being the result of a clever exercise in making everything glossy and shiny, as there’s very little actual detail in the car models. The same is often true of crash sequences and vehicle damage modeling. That said, when you’re zooming around one of the tracks, these little gripes don’t matter all that much and the game looks great. As far as the soundtrack goes, the music isn’t particularly standout or catchy, although it does become suitably intense as the race progresses.

The single player campaign consists of a total of 72 races set across the aforementioned 6 different race types and 12 tracks. Over the course of the solo career you unlock all of these tracks, race types and extra cars to use in both quick play mode and, in the case of the vehicle unlocks, the online multiplayer. All of this combined offers enough incentive to complete the career, but there’s not much staying power beyond completion, unless you still have an extra car or two to unlock, in which case you can go back and compete in earlier races in order to try and improve your position.

Beyond quick play and the campaign, there’s also offline split screen multiplayer and online multiplayer. Online is pretty standard but perfectly functional and generally a smooth playing experience. You can play in public or private matches, competing in standard, elimination or survival races. There’s a ranking system, which has you working from level 99 to level 1, gaining placement when you beat more opponents in a race than you lose to and losing placement when you don’t. Throughout all game modes and race types the game tracks your statistics, which can then be viewed from the menu. There are a few key missing statistics, such as total time played, but it’s still a nice extra to have.

Split/Second could have been so much better. As it is, it’s a solid enough racer, but one with rubber-banding taken well beyond the realms of acceptability. Handling is responsive and the combat slant is unique and fun to explore, even if it ultimately becomes predictable. Split/Second is a good jolt of fun for the duration of its solo campaign, with some good graphics and a fair amount of variety, but stick around too long and the cracks will start to show.