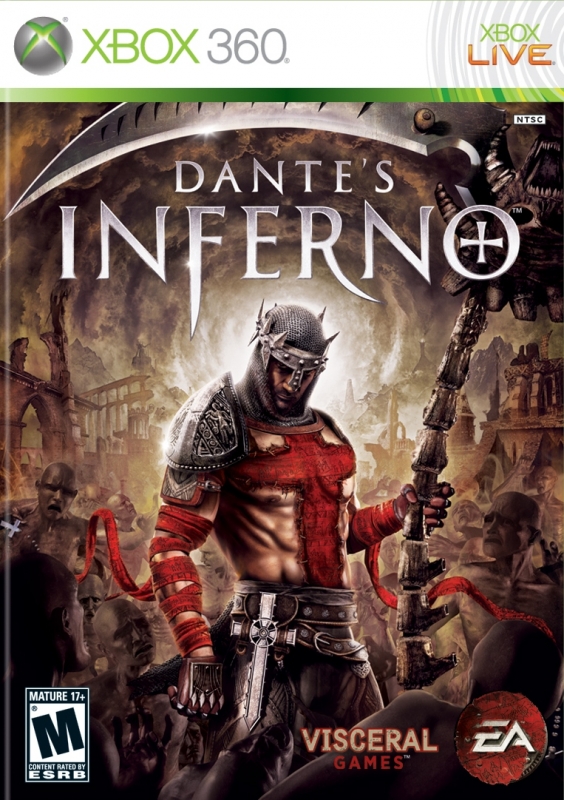 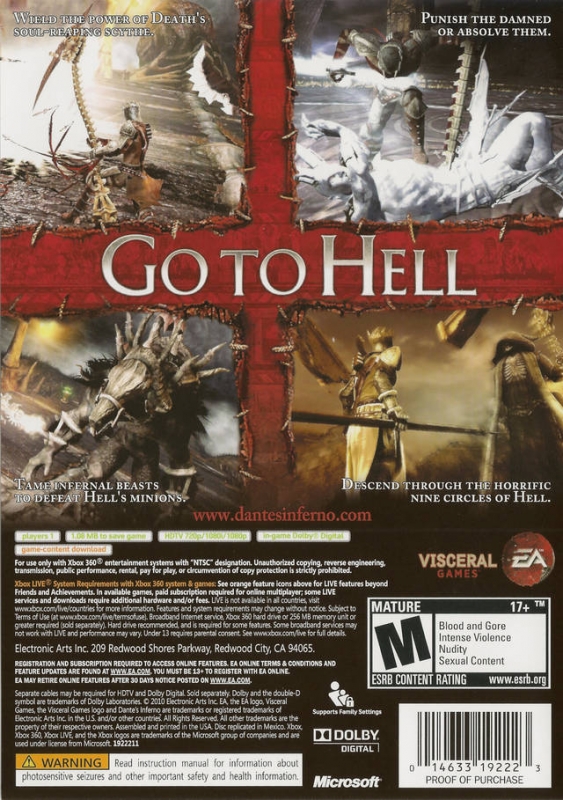 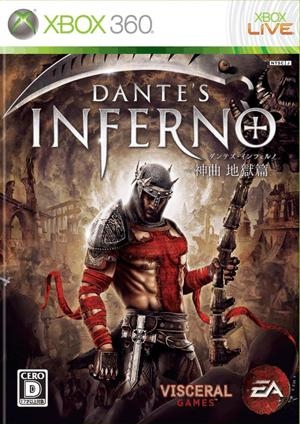 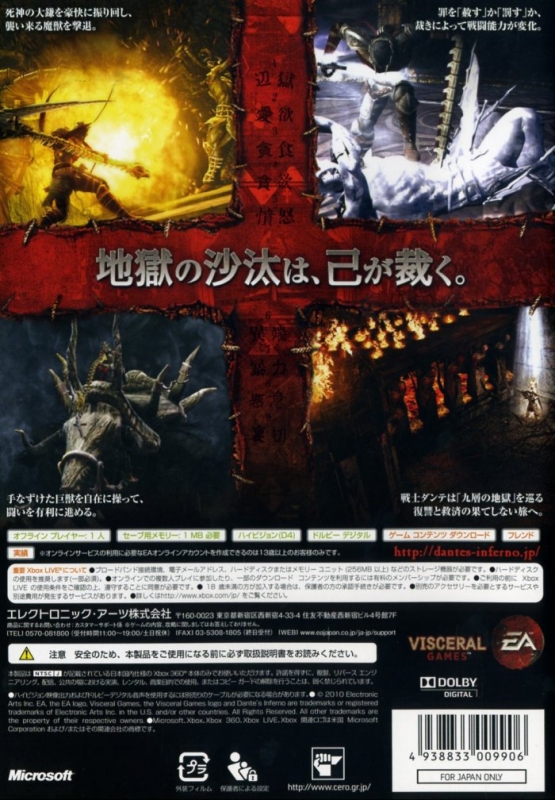 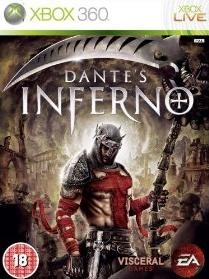 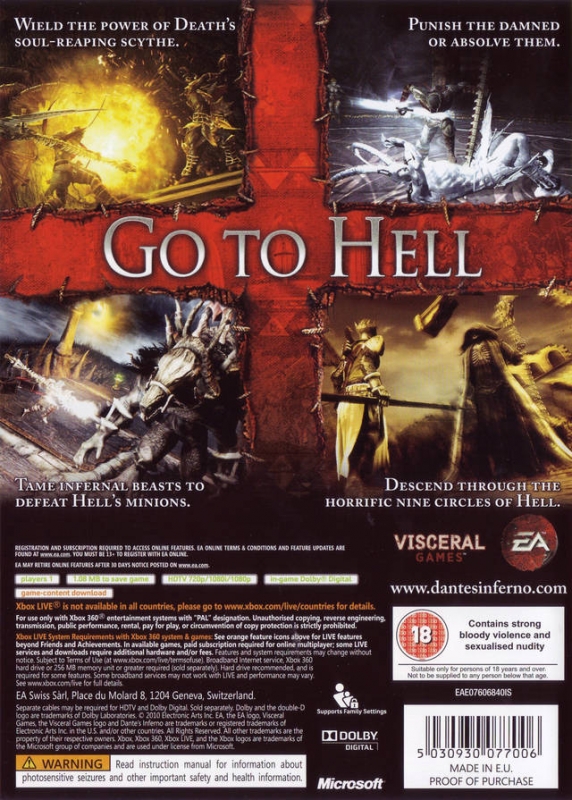 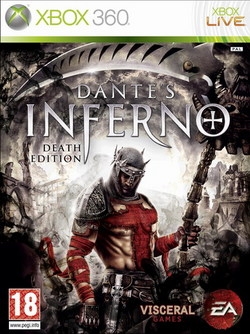 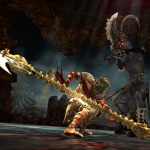 “Abandon all hope, ye who enter here”… not necessarily

By now, it is common knowledge that just about anything is susceptible to being made into a videogame. Therefore it was only a matter of time until we were playing games based on epic poetry such as the Inferno. Developed by Visceral Games, Dante’s Inferno is the re-imagining of Dante Alighieri’s influential work as a violent hack and slash. The game bears a strong resemblance to a certain other mythological action adventure, but does that mean it lives up to the acclaim of its source material?

Dante is a soldier during the Crusades, and after executing many terrible crimes, he is confronted by Death. He survives, and after experiencing the horrors of war, returns home to find both his father and his fiancée Beatrice slain. The innocent Beatrice is taken to the underworld, so Dante plummets to Hell in order to save his betrothed. His journey is not an easy one and will require him to survive the nine diabolical circles of Hell. Listed in order they are: Limbo, Lust, Gluttony, Greed, Wrath, Heresy, Violence, Fraud, and Treachery.

The combat system fueling Dante’s descent seems well thought, but that does not mean that it is perfect. Dante’s weapon of choice is the scythe which he wins from the Grim Reaper. Melee attacks are relegated to the same two-button scheme found in many other action games: X for swift-light attacks and Y for stronger but slower hits. LT blocks, the right analog stick evades, LB utilizes magic and A is used for jumping and double jumping. B fires projectile holy crosses, your supply of which is infinite. By defeating foes, you build up the Redemption meter. Once it is filled, Dante can receive a boost in attack power if you press RB and LB together. Overall, the controls are easy enough to grasp, though it took me a while to get the hang of countering some enemy attacks.

As you would expect, this is a violent game, featuring graphic fatalities and copious amounts of blood splatter. The grotesque enemies you encounter are all vulnerable to being ripped apart (or worse). But beyond the gore, the world of Dante’s Inferno is innately dark and miserable, filled with damned denizens at every turn. Reprising his role from the original poem is the poet Virgil, your guide through Lucifer’s dominion. The overall theme throughout is that you can be the sole emissary of divinity or be just as savage and relentless as a demon.

The range of enemies you will square off against is not as large as it could be. There are demons, gluttons, heretics, and even unbaptized babies. The variety changes as you progress through each of the nine circles. Eventually, the enemies become overly repetitive and just downright unpleasant to encounter. You are capable of stringing together attacks for formidable combos, and will unlock more of these combos as you collect souls to upgrade Dante’s abilities. This is another game that uses the notorious Quick Time Events (QTEs) to supplement the action. Usually, these are initiated when a shoulder button icon appears onscreen. As you would expect, they are used to finish off enemies and bosses, and perform otherwise impossible feats during gameplay. This is neither the best nor the worst use of QTEs which I have encountered, but it does help that they serve another purpose in the game.

One of the more original ideas to be found in Dante’s Inferno is the Judgment feature. You have the ability to either punish or absolve many enemies within the game. Absolving will lead to enemies ascending in an explosion of light, while Punishment means a sadistic demise. It may not sound like much, but your decisions come with consequences. Your choice to either punish or absolve will unlock abilities down both a holy and unholy path. This system extends past just the combat, as you will come across many damned souls named Shades throughout your journey. Each Shade is based on the soul of a past mortal with some historical significance, and after reading of their sins, their fate is placed in your hands. Honestly, there is no point in being partial when it comes to these choices as the only way to get significantly stronger is to choose a path and stick with it.

Apparently, Hell contains a few puzzles, serving to break up the fighting segments that comprise most of the game. They are not overly complicated, occasionally falling back on clichés of pulling levers and rotating switches. There are a few that display noticeable degrees of originality, the best of which comes early on and involves mind-bending portals. The level design is one of the biggest downfalls of Dante’s Inferno. None of it is bad per se, just forgettable. Some games prove that linearity does not impede original level design, but this is not one of them. Sure, not all of your time is spent running around killing off baddies; you’ll rappel and crawl across walls, grapple your way to certain areas and even hitch a ride atop a beast or two, but its just not remarkable.

I maintain that this is a decent game. The inspired look to it certainly helps. The graphics, while not stellar, are appealing, and the game runs with few technical hiccups. A few ingame environments really hit you with their attention to detail and sense of scale. The artists tried to make each circle of Hell look distinct, which they do to a certain extent (Greed is golden and Gluttony features a lot of disembodied mouths). But to the casual observer, it all just looks like Hell. The animations are rock solid. The art direction on the enemies is striking: they certainly give off a demonic vibe, especially some bosses like Cleopatra and her strange mouths for nipples. Speaking of bosses, they too fall in the mixed realm of simply average.

It is ironic that a game about eternal damnation could have a story that feels so soulless. Obvious license with the original poem was taken but it doesn’t feel as though it was taken far enough. There is no compelling reason to care about the characters or what happens to them. Dante will encounter Lucifer and a villainous incarnation of Beatrice but all they do is taunt him with memories of his past sins. Every now and then, you will come across someone from his personal life who he has wronged, and even be forced to fight them, but considering that all of these characters are already dead, their fate is inconsequential from the player’s perspective. Nothing particularly gripping occurs until close to the end of your adventure.

The story is told through a blend of in-game, CGI, and hand drawn cutscenes. Each method looks good, but the 2D used for flashbacks is the most eye-catching. Dante’s Inferno does not sound bad either. The soundtrack, voice-overs and sound effects are all up to par. The appropriateness of this game’s presentation compared to the original piece is something I am not capable of determining but I doubt that matters to most gamers who will play this.

In terms of raw play time, the main adventure could run anywhere from six to 11 hours. The game makes a strong case for at least one replay, thanks to an unlockable difficulty, tons of collectibles, and the opportunity to venture down the path you ignored the first time around, so you can experience every ability that Dante is capable of. There is also the Gate of Hell arena, where you battle wave after wave of enemies, while simultaneously battling the constraints of a time limit.

Ultimately, Dante’s Inferno follows an interesting approach, with ideas that do not fully pan out. The holy and unholy aspects are some of the few parts that make this game feel different; much of the rest feels stale. Does it stand toe to toe with the best Hack and Slash action games available? Not at all. However, there is a fair amount of amusement that you can squeeze out of this trip through Hell, if you are a fan of the genre.