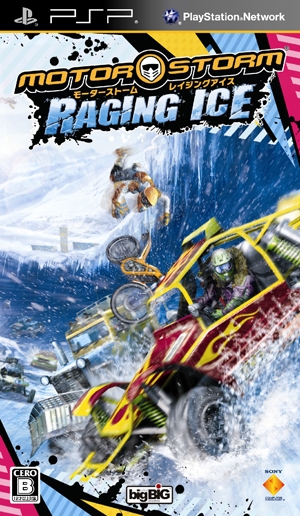 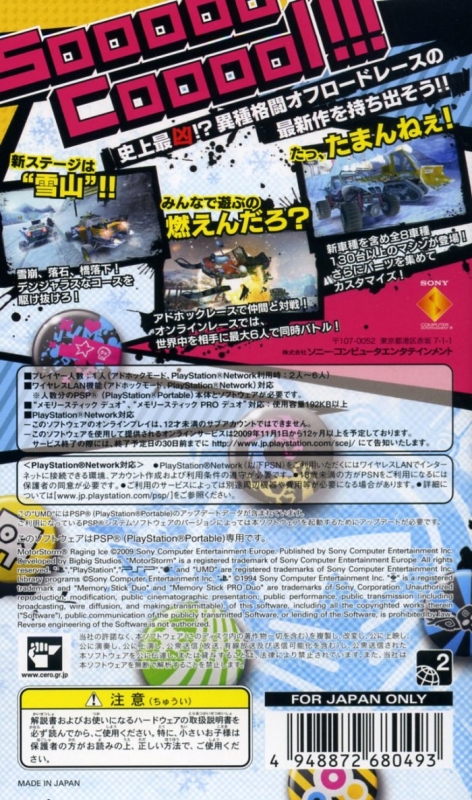 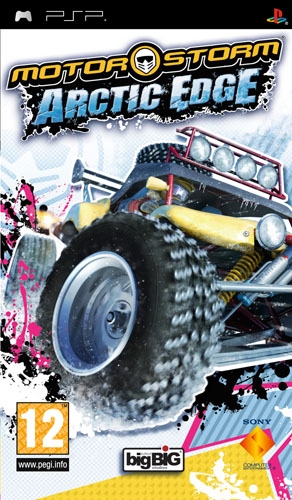 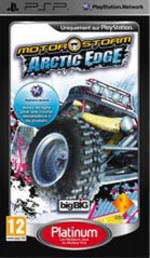 Has the transition from PS3 to PSP served MotorStorm well?

Bigbig Studios have done a tremendous job of bringing MotorStorm to the PSP in its entirety. This isn’t one of those lobotomized spin-offs; what you get here is a fully-fledged MotorStorm game that actually feels like MotorStorm. Right from the get-go you’re made well-aware of the similarities between this title and its older brothers with a slick cut-scene that introduces the new Arctic festival, bright menus blasting licensed music through the speakers, and beautiful scenes from the festival playing out in the background.

The first port of call for most players is likely to be the career-like Festival mode. Here the 100 races of your MotorStorm career are all listed, with the majority being blacked out ready for you to start unlocking them. You start off with the easier rank 1 events and gradually build up to the eighth and final rank, where the difficulty level is noticeably ramped up. You unlock new events by finishing on the podium in the events you’ve already unlocked, and also by completing certain challenges such as holding on to first place for a set amount of time during a race, or completing the race within a certain amount of time. 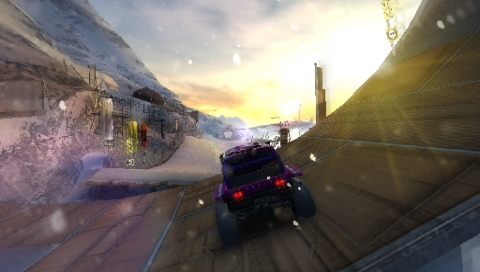 The difficulty curve is steady and eases you into the game nicely. You should be able to complete all of the races from the first few ranks with relative ease, all the while learning the course layouts, becoming familiar with different vehicles, and facing off against quite mild AI opponents. As you progress through the ranks you’ll notice the AI becoming more aggressive and the trademark MotorStorm rubber-band AI makes its unwelcome return as well. No matter how large a lead you manage to build up the AI can seemingly demolish it at will in later races, thanks to its seemingly unlimited boost which seems to easily outpace yours. It can all be extremely frustrating at times because it feels like the AI is cheating and all pretence of skill is thrown out of the window.

This is a problem the other MotorStorm games also have, but with each successive release that fails to tackle these frustrations the more it becomes inexcusable. A certain amount of leeway must of course be given to Arctic Edge. It is a PSP game after all, and it would be patently unfair to hold it to the same standards I would apply if it were the third PS3 release which failed to tackle these problems. Nonetheless, do be aware that these issues persist, so check your tolerance levels before purchasing.

There are eight different vehicle types to choose from, of which five are staples of the series (bikes, ATVs, buggies, rally cars and big rigs) and three are exclusive to Arctic Edge (the snow machine, snow plugger and snow cat). Each vehicle type feels slightly different to control, and each has its own strengths and weaknesses. One important thing to note is that the controls aren’t as tight here as they are with the PS3 games. They’re less precise, and the vehicles are harder to control as a result. Of the new vehicles, the snow machine and snow cat are the more unique, with the snow machine fitting in nicely between the ATV and rally car, whilst the snow cat to some extent replaces the monster truck from Pacific Rift. The snow plugger is the most disappointing of the three - essentially, it’s just a renamed mud plugger. 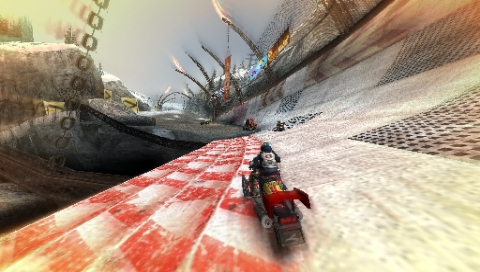 The 12 tracks are all large, with multiple routes and plenty hidden paths to find. All credit to the developer for actually maintaining this MotorStorm tradition. One could easily have envisaged a PSP MotorStorm having linear track designs, but Bigbig Studios have stayed true to MotorStorm style and delivered strong racing tracks. No corners have been cut with the track details either - there are even unique Arctic-themed obstacles, such as avalanches and areas of thin ice. The little things like cool-down areas have made it into the game as well, this time in the form of snow drifts which cool down your engine. The different track surfaces play a large role in the game as well, from the mud which favors the bulkier vehicles, to ice and dirt track which favors the lighter ones, to the deep snow which favors the new vehicles.

The graphics vary from superb to average. Take the vehicle designs for example - rally cars, buggies and big rigs are really quite ugly; ‘colored cardboard boxes’ is a somewhat apt description. ATVs and snow machines on the other hand are quite impressive, almost a mirror image in fact, well defined and with riders who mimic some of the taunts you find in the PS3 games. There’s a similar disparity with the look of the tracks as well. Track surfaces can sometimes look muddied, again lacking defined textures, and the different track features can sometimes blend together in an ugly brown mush. At other times, however, the tracks are fantastic, with long draw distances and vast, impressively detailed backdrops. You can launch yourself off a steep ramp and admire the stunning view of the track below with awe.

The weather effects are a nice highlight. Snow sprinkles the screen and sun glare creates some great lighting effects. Mud will flick up onto the screen and the tracks deform, leaving tire marks which correspond appropriately with the relevant vehicle. Even the slightly dodgy slow-mo crashes make the transition from PS3 to PSP. Sometimes, when everything comes together perfectly (weather effects, track detail, vehicle detail, 10 vehicles all vying for position, set against some impressive sun glare and backdrops), the game can look so good that you wonder how this is possible on a handheld. Catch the game at its low point, however, and you’ll wonder if you’re still playing the same game. 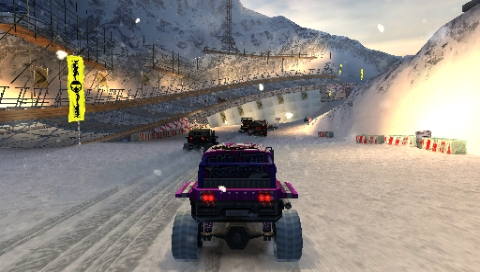 As you may have come to expect from MotorStorm, there’s a solid licensed soundtrack, consisting mostly of rock, metal and electronic music. This plays in the background throughout the game, and is particularly well suited to the gameplay. There are 20 tracks in total, featuring artists such as The Prodigy, The Chemical Brothers, and Queens of the Stone Age. The playlist is fully customisable, so you can remove any of the songs you don’t like. As an additional bonus you can also import music that’s on your PSP into the playlist, up to a maximum of 128 songs.

The original MotorStorm had a paltry amount of content, and this was undoubtedly the most improved area of the game in Pacific Rift. This trend continues with Arctic Edge. For a PSP game there’s a superb amount of content on offer, easily beating out the original MotorStorm in this respect, and coming only slightly short of Pacific Rift (and these are PS3 games I’m talking about). There are 12 tracks, 100 career races, 8 different vehicle classes (each with a number of different vehicles available to unlock), 20 music tracks, a full complement of game modes, and a bunch of extra unlockables.

As well as a full Festival mode, which allows you to unlock extra vehicle types, customization options, concept art and videos, drivers and badges (an in-game trophy/achievement system), there are also Free-Play, Time Attack and Photo modes. Free-Play allows you to set-up a single race to your own specifications, with options to select the track, race type, number of laps, difficulty, race opponents, the track direction, and of course your own vehicle. Time Attack mode is self-explanatory, and as with previous games in the franchise you can race against the times set by the developers. Photo mode allows you to pause the action at any point and take a screenshot – pretty handy for this review, and a nice extra, but it will no doubt have very limited appeal. 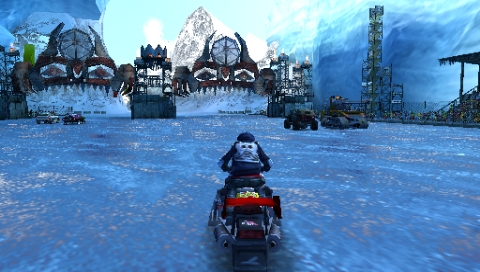 The main ‘value’ criticism I have of the game is that - despite the amount of content packed into the game - it lacks longevity. The career-like Festival mode has now become stale and Arctic Edge suffers because of it. As with Pacific Rift, the developers have managed to mix it up a little bit so you aren’t always simply competing in straight forward races. There are also Speed races, where there is a timer counting down and the goal is to race through a number of checkpoints scattered around the track in order to add precious seconds to the clock, and a Time Ticker race type where the aim is to hold on to the lead for the longest amount of time. These different race types add a bit of variety to the basic Festival mode, and in the case of the Speed races help you to learn parts of the track you might not otherwise know about or have much experience with, but they don’t do enough by themselves to arrest the increasingly tired and formulaic nature of the series’ Festival mode. Becoming familiar with all of the different vehicles and tracks, and discovering the optimum routes for the different vehicles as you progress through the Festival mode undoubtedly extends the appeal of Arctic Edge, but you’ll tire of the game long before you run out of content. 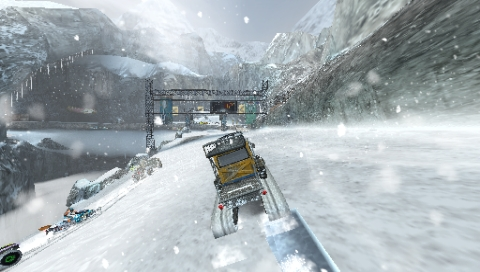 It’s a testament to the work Bigbig Studios have put into Arctic Edge that many of the criticisms I’ve levelled at it could easily be applied to its PS3 cousins as well. MotorStorm: Arctic Edge is the real deal; a fully fledged MotorStorm game on the PSP, warts and all. Nothing has been left out, from the slightly dodgy slow-mo crashes and frustrating rubber-band AI, to the ambitious track designs, familiar gameplay modes, mounds of extras and full-on racing carnage. That in itself is an impressive achievement. However, Arctic Edge does no more to evolve the series than Pacific Rift; it merely transfers the experience to the PSP. If that’s exactly what you were looking for in Arctic Edge then you should definitely consider purchasing it, but those hoping for a much-needed evolution of the series should steer clear.