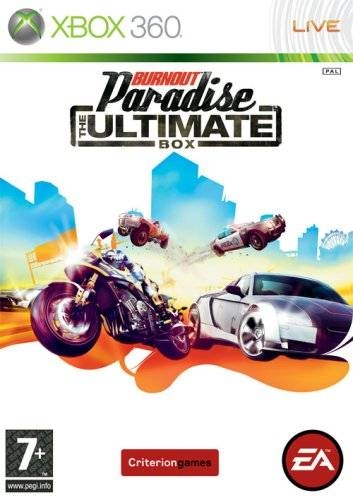 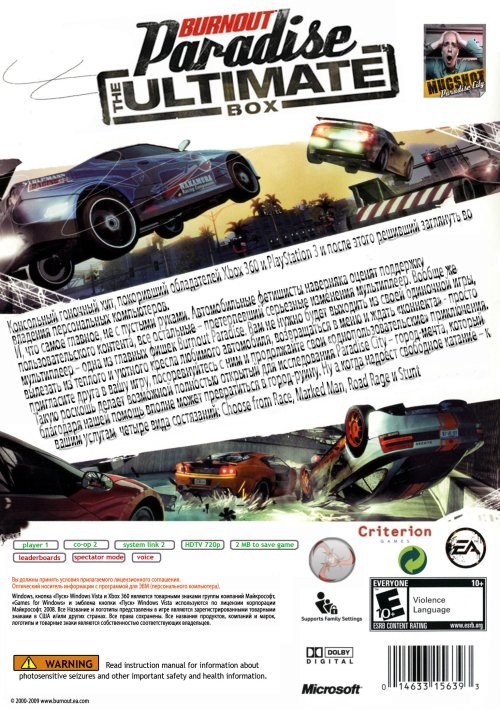 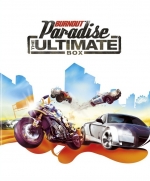 Burnout Paradise: The Ultimate Box includes everything the original version had to offer and adds bikes and a party mode to it. Should you buy it?

When Burnout Paradise launched on Xbox 360 and Playstation 3 last year it was met with critical praise. The new sandbox style of the Burnout series, together with the crisp graphics and the great soundtrack was enough to make the game a hit. Now EA wants to fix some of the remaining complaints of the original version by releasing the Ultimate Box. But before I go into the game’s specific improvements, I’ll give you a summary of what Burnout Paradise is all about – those who played the original game already may want to skip this part and scroll down to the improvements.

Burnout Paradise takes place on a tropical island. Unlike previous games of the series Paradise allows you to drive through an open city, which adds a distinctive sandbox feel to the game. The city is subdivided into six sections: White Mountain, Silver Lake, Palm Bay Heights, Harbour Town and Downtown Paradise, the last three representing the central city with many crossroads and a lot of traffic. Spread all over the city are gas stations, garages and junkyards. Gas stations fill your boost to the maximum, while garages and junkyards are used for car repair and selecting your cars, respectively. All in all there are more than 70 cars to unlock (and a lot of different bikes).

Events wait for you at each traffic light located in the city. Drive towards a traffic light and hold down the shoulder buttons to start the event. There are classic races but also road rage which requires you to take down other cars, marked man which lets you feel the rush of being hunted by aggressive CPU cars, stunt events in which you have to do as many spectacular stuns as possible and showtime which lets you perform a nearly unlimited chain of crashes. Also implemented are certain challenges like 400 smash gates, 120 billboards, and 50 super jumps scattered throughout the city to find which makes the game feel more complete.

The cars in the game control surprisingly well. Hardly ever will you have problems with the controls and each car has a slightly unique feel to it. The control scheme itself is rather classic. Of course not everything in the game works as well. First of all the map is rather complicated and during a race (in which you have to find your own way through the city) you’ll often find yourself confused. To find the best way to the destination you will often have to take a look at the menu map which works rather slow and takes some time. This may sound like only a minor complaint but it can really kill the fun until you get used to the open world. Also, if a race ends on the western part of the map you’ll often find yourself in a region without many event starting points which can be annoying if you just want to finish some races. All in all there are not many complaints, though.

A nice feature EA added is the inclusion of a quick access to online mode by using the D Pad. This way you can quickly find events or races and play against people on your friend list. The online mode itself also works decently and offers a nice variety of different playing types. There are literally several hundred online challenges for up to 8 players. Adding all those things together you can expect the game to last at least 30 hours, longer for the intense online gamers.

Graphically Burnout Paradise: The Ultimate Box is a satisfying experience. The visuals are sharp and the environments look interesting. Granted, there are graphically more impressive racers out there, with more detailed cars and better textures but there’s no area in which Burnout Paradise falls below high average. Two areas have to be pointed out separately: The first one is the frame rate. The developers did a fantastic job to make sure the game always runs smoothly. Hardly ever will you experience any slow downs. The game runs smoothly as hell. The second area is crashes. When you crash into a wall, a car or a building your car is completely demolished at times. The crashes, including small car pieces flying through the air, are one of the most amazing aspects of Burnout and definitely worth a look.

Burnout also shines on the audio side. The car and bike sounds, the honks of other cars, the drifting and the background music featuring mostly Rock songs (the most prominent one being Paradise City from Guns ‘n’ Roses): everything is well implemented and sounds astonishingly great. If there’s a category I underestimated Burnout before playing it then that has to be the sound. Great work here.

But the things mentioned above have all been implemented in the original version of Burnout Paradise already. EA has also included some improvements and additional play modes, the most prominent one being the inclusion of bikes right from the beginning. When you swap your car for a bike the first thing you’ll notice is how incredibly fast the machines feel. The average acceleration of a bike is way better but unfortunately they are also slightly more difficult to control. If you like bikes or cars better is up to you but they are definitely a nice feature even if you only use them for having some fun while driving.

One big complaint about the original version of Burnout Paradise was the player’s inability to restart races. Thanks to the big map and the often complicated structure of the streets players often had to drive long distances back to the starting point of an event in case of a failure even if it became apparent that they had lost the race shortly after the start. Luckily EA included the possibility to restart a race whenever you want which drastically reduces frustration after a lost race.

Also added was a multiplayer part: In the newly implemented party mode you can play against up to seven of your friends by passing the control pad around. The party mode is divided into three categories: Race (requiring you to drive to the destination as fast as possible), Stunt (gain as many points as possible) and Skill (drive through complicated courses without crashing) and is also available on Xbox Live and PSN for owners of the original version for about $10. You can also play through certain events like having as many almost-crashes as possible. The inclusion of the multiplayer mode in the Ultimate Box is a nice bonus, makes the overall package feel more complete and is a decent idea for people without many controllers. Unfortunately there is no split screen mode.

When taking all these different aspects into account it is highly important to note one thing: People who own the original version of Burnout Paradise should definitely pass this game. It doesn’t offer enough improvements and most of the additional content is ready for download on online anyway. People who skipped the game or were on the fence should give it a try, though: The Party mode, the bikes and the ability to restart challenges are nice improvements and the game itself is a great racer. If you’re a fan of racing games, you can’t go wrong with the Ultimate Box.