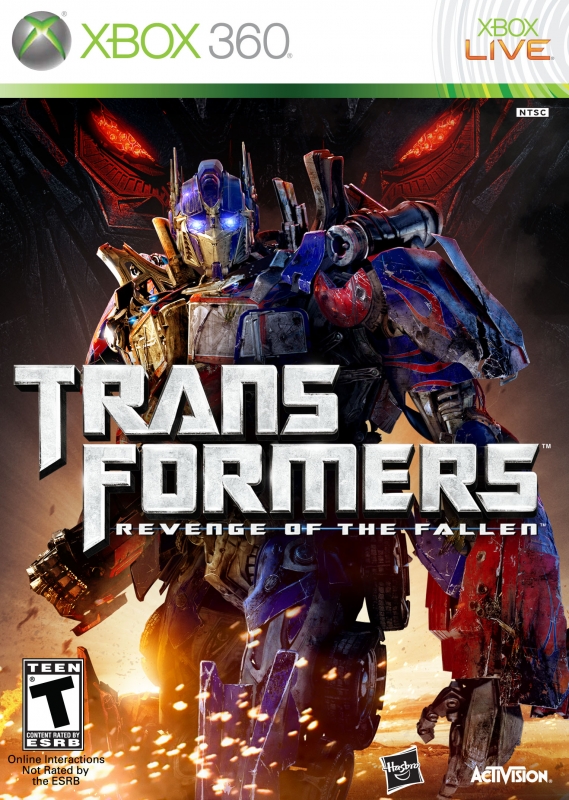 Transformers: Revenge of the Fallen (X360)

Transformers: Revenge of the Fallen

Another attempt at a Transformers video game. Click to find out if it is as fantastic as the 1986 animated movie or the horror of the sequel.

Nothing is more connected to my childhood than Transformers. While living overseas, I would watch recorded episodes of the old series, and I have seen the animated movie upwards of 30 or 40 times. So when a chance comes around to play a game starring my favorite robots, I can’t pass it up. This may not be quite the definitive Transformers game that I hope for one day, but it was a decent enough attempt.

Transfomers: Revenge of the Fallen has you playing through the latest movie. There are separate campaigns for the Autobots and Decepticons and the stories are interwoven nicely, unlike some games playable from multiple perspectives. Unfortunately, this is a movie-based game, so the story is pretty bare. You are told what is happening through a voice over, but there is no exposition in the story and it seems to be missing some chunks. Perhaps it is mandated by the publishers that you don’t expose too much of the movie’s story in the game, but this leaves the game with a skeleton story that is not worth telling.

Once you have chosen a side, you are taken to a command center that acts as your main menu, from which you choose what mission you want to go on. The missions will plop you into a city area where you are given a primary objective and two secondary objectives. The primary objective usually involves protecting something if you are the Autobots or destroying something if you are the Decepticons. Unfortunately, these missions can still play out similarly when the Decepticons are tasked with taking some engineers hostage and the Autobots are tasked with saving them. Secondary objectives are usually destroying a certain number of enemies with a specific attack and have almost nothing to do with the primary objective, but they reward you for completion. Primary objectives are always timed, and you get a certain medal based on how quickly you complete the mission. Each medal has a value of campaign points - accumulate enough points and you access more missions. This seems like an interesting system at first that will force people to do some non-necessary missions, but unfortunately it is easy to get more than enough campaign points by just doing the story missions so it doesn’t work out that way.

Each side has four transformers to choose from, but most times you are only allowed to choose a predetermined one on your first play through. Gameplay is mostly taken up by third person shooting. Nameless Transformers from the other side will get in between you and whatever objective you have, and you can take them out with one of two weapons. Each Transformer has a primary and secondary weapon (which range from grenade launchers to sniper rifles) and you can bring this weapon up by holding the L2/LT button and shoot with the R2/RT button. You can also change the weapon you are using by pressing R1/RB, do a melee attack with Square/X, and Triangle/Y will do a special move that depends on the specific Transformer you are using at the time. There is no ammo but using a weapon too much too quickly will cause it to overheat and you will have to switch to another weapon for around 10 seconds or so. Defeating enemies rewards you with Energon that you can use to upgrade your team’s weapons, health and cooldowns.

What would a Transformers game be if you could not transform into vehicles? Well obviously it would be an unfortunately named robot game which was brought forth by irate Gobots fans to ruin the lives of Transformers fans. By holding down R2/RT when not aiming your weapon you can switch to your vehicle form. When in vehicle form R2/RT is your accelerator button, but unfortunately this is a bit hard to use well because you will go out of vehicle mode if you let it go completely. L2/LT allows you to drift around corners and brake, while Square/X will fire off a vehicular weapon. Transforming into a vehicle is fun and allows you to pull off some really cool moves, like jumping out of vehicle form and flying over your enemies while you shoot at them Optimus Prime style, but it really doesn’t control very well. As a car the controls are very rigid and don’t allow for much nuanced control and if you use any of the flying transformers you will end up with the same problem. It is also highly underused since almost all of your objectives involve operating as a robot instead of as a vehicle. I personally would have appreciated a little more work on the driving controls and a mission or two that played out as a car chase or something similar. As it is now, the transforming ability feels like something tacked on to get you from A to B faster.

Overall, from a gameplay perspective, Transformers feels like an average third person shooter with the ability to transform added on. The variety is kept up a bit by having four transformers to choose from, with different stats and weapons, but in the end the game really could use some variety in mission types. There is a distinct lack of awe inspiring boss fights and these gaps are instead taken up by fights against the known Transformers from the other side. These can be fairly difficult - especially when the game tasks you with a 2 on 1 fight - but they do not really qualify as boss fights in my mind. There is a cool fight with Devastator on the Autobot side, but the Decepticons have nothing like that except for the final mission.

Visuals in Transformers are based off the movie, so all of the Transformers have that 'new age' overly-complicated look that irks me as a long time fan, but I can’t fault them for that. The character models have a hard time living up to those in the movies, and they look like pale attempts at mimicking the movie character models. Objects break apart into rubble as you stomp through them, but they disappear into mist almost immediately after.

The music is very quiet, but this neither helps nor hinders the experience while playing. The voice-overs all match what I’ve heard from the movies very well and it is always a lot of fun to hear Peter Cullen as Optimus Prime. The only real problem with these voice-overs is that there are not enough of them. After each mission the Transformers will admonish or praise you based on how quickly you performed the task and how many secondary objectives you completed on the way, but these soon repeat and become more tiresome than they would otherwise have been.

Transformers has an extremely short play through, but it makes up for it in a number of ways. I played through both the Autobot and Decepticon stories in 5 hours total, but after doing that I found that I had only completed half the missions for each, so you could get more out of it if you wanted. There is also an online multiplayer mode that has Deathmatch, Team Deathmatch, Capture the Flag, and a few more modes to choose from. This is a nice way to keep playing Transformers if the gameplay really grabs you, but there weren’t enough people online when I tried to even fill a whole match. When playing multiplayer you can choose any Transformer, which seems strange since some seem easily more powerful than others such as Optimus and Megatron, but they are not so overpowered that they make the game unplayable or markedly unfair.

There are also unlockables that you can obtain, including one of the greatest unlockable ideas ever. Six of the unlockables give you full episodes of the old Transformers cartoon to watch at your leisure. This is one of the first times that I have played a game and actually cared about an unlockable prize. On the Autobot side you get three Dinobot focused episodes, while the Decepticon side gets a three episode series that focuses on Sparkplug being mind controlled. My only issue with these videos is that you can only start, stop and pause them, so you cannot control them like you would most other videos.

Hopefully one day I can play and review a Transformers game that fills me with wonder like the show did when I was a kid, but that has not quite happened yet. Transformers: Rise of the Fallen is a decent attempt at a third person shooter based on the Transformers. The visuals are not awe inspiring, the voice-overs can grate over time, and the driving mechanics need some definite work, but the variety in how the different Transformers play, a serviceable multiplayer, and the best idea for an unlockable ever make up for it. If you loved the movie (or Transformers in general) this game is definitely worth a look. If neither of those apply to you, this game is not a good enough third person shooter on its own merits to garner your attention.