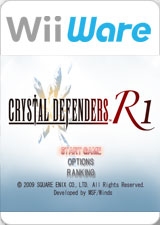 Crystal Defenders is re-imagined for WiiWare with a few differences, is it worth your time?

As you may or may not know, a tower defense game places the player in charge of laying down a series of defense mechanisms called “towers” to stop an army of marauding bad guys. Usually the villains have a set path to march through your camp/castle/base, so you have to use quite a bit of strategy to keep the masses at bay. It was just a matter of time before home consoles got a version of Crystal Defenders, Square’s foray into the “tower defense” genre that was originally released on mobile phones. Just a short time later, a complete version of Crystal Defenders was released on XBLA and PS3, but the Wii got something different: Crystal Defenders R1.

In Crystal Defenders R1, you must deploy various units such as Soldiers and Black Mages to stop wave after wave of encroaching monsters from escaping the area with your party's crystals. There are many different types of units to choose from, some specializing in powerful short-range attacks, some wielding far-reaching magicks, and still others equipped with bows that enable them to bring down aerial foes. You must deploy units in strategic locations to take full advantage of their traits. Each time an enemy breaches your defenses and reaches a map's exit, your party will lose crystals. When all your crystals are gone, the game is over.

One thing that is immediately noticeable with Crystal Defenders R1 is that it is a barebones affair when it comes to everything. There is no storyline to speak of, which is a real shame because you are simply tossed headfirst into a series of battles with little interaction from any of the characters. All I know is that there is a moogle that tells you important information sometimes, but that’s pretty much it. Without this character driven motivation, the game seems monotonous and redundant after only a few short levels.

In R1, you are given a small amount of money (Gil for Final Fantasy veterans) to spend on your troops. You have the choice to either buy new troops, or to level up existing troops. When you kill a monster you get more money, and the cycle continues. R1 contains seven character classes and three summons. This small list includes the Soldier, Black Mage, Monk, Archer, Thief, Time Mage, and Dragoon.

These classes are all fun, and each has a respective level to show off their strengths and weaknesses. For instance, when the archer is fully introduced to your army, you suddenly get waves of super powerful flying enemies to contend with that you never had before. Each class has a potential ranking, and you must level them up using your Gil in order to max them out. This grinding becomes easy as soon as you get the thief class, as you can set up “money traps”, as I was calling them, where monsters get swarmed by thieves as they die and drop tons of cash. If you happen to “max out” any characters, they do not transfer to any other levels, meaning you start 100% from scratch once you beat the level. The gameplay in R1 is really its strongpoint, as the game was really fun as long as I didn’t try to play it for large portions of time in a row.

Crystal Defenders does have some form of an online system with an online ranking mode for three levels, one of which is hidden. The problem is that this level can only be accessed when you get the rank of "perfect" on all of the other levels, which isn't as hard as it is annoying and tedious. You get points based on how much strategy you use and how little money you have left over, so getting those high scores can be a real challenge.

The graphics for Crystal Defenders are pretty good considering that they are directly ripped from the Final Fantasy Tactics A2 game for the Nintendo DS. There really isn’t a whole lot to speak of as the game looks like someone made a fan made RPG using FFTA sprites, which kind of makes it look cheap especially on the big screen. The music is of a similar vein, and not all that inspired to be honest. The music was fine, don’t get me wrong, but it’s directly lifted from the aforementioned DS game.

Being a Final Fantasy Fan, I have picked up pretty much every Final Fantasy related game that I could, on whatever systems I happened to have at the time. This has led to some great surprises, and other situations where I wondered why exactly I picked the game up. This is sort of the case with R1, as it has only 13 levels out of the original 300 that the iPhone version has. I may not be a rocket scientist, but 800 Nintendo points for a strategy game that only lasts a few hours seems kind of like a quick cash-in. Since each level only lasts something like five to ten minutes depending on how long you take to set up towers, I got the feeling I was getting a little less than expected. In all honesty, if you have access to the other formats for this game, I would recommend those, as R1 is probably best reserved for complete newcomers to the series, or Final Fantasy collectors. I will probably get Final Fantasy Crystal Defenders R2-let’s just hope that it’s a bit better than R1.