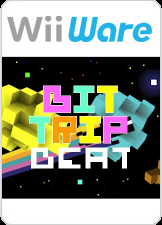 It takes an homage to the granddaddy of all games, to be this years most refreshing and original game for me.

Every once in a while, a game comes along that takes something mundane, something done to death, and flips it on its head. How many times have we all played Pong? Most will be thinking "Way too many times to count." Many would argue that Pong is Pong no matter how many people dress it up, whether it is with 3-D graphics or a storyline; it’s still Pong. Bit.Trip.Beat may bear some resemblance to that classic game, but this is not your father's Pong. Following on the heels of this new retro gaming revival, Bit.Trip.Beat is everything that made the Atari 2600 great. Imagine a weird amalgamation of a scrolling horizontal shooter, a music game, and Pong. Sound weird? We’ll get ready for Bit.Trip.Beat.

Bit.Trip.Beat is an incredibly simple game to play. Literally all you have to do is hold the Wiimote sideways like an NES controller and tip it forward and backward to make your paddle move up and down. This paddle is located on the left side of the screen, and the blocks come from the right, similar to games like Gradius. When a colored block heads towards your side of the screen, all you have to do is move your paddle into its path and bounce it back. Done successfully, the block will make a sound to accompany the background music playing. The game launches tons of these blocks at you, so that you are literally playing the music with your ping-pong paddle.

The game takes a cue from rhythm games like Guitar Hero and Dance Dance Revolution in that the overall aim of the game is to rack up the biggest score that you possibly can. This involves not missing beats, and chaining together huge combos. This is easier said than done considering some of the intricate beat patterns that come up, including fast moving ones, or ones that have some sort of gravity and come back to you once hit. Add to this mix power ups like double paddles, or larger paddles, and even power DOWNS like smaller paddles and you’re in for some hard retro gaming.

During the game you have to contend with two meters running on the top and bottom of the screen. The Mega Meter allows you to go into a hyper mode if you rack up a bunch of points, and the Nether Meter is the bar that gauges how close to death you are. As you miss beats, the Nether Meter fills, and if you let it fall enough the game switches to monochrome with no music aside from the classic Pong sound effect. To get out of this near-death experience, all you have to do is get enough points to crawl out of the Nether Meter, and you're back to merrily blasting music blocks.

Bit.Trip.Beat contains three levels of increasing difficulty, and a multiplayer mode. Three levels may seem a bit too tiny to warrant a purchase, but keep in mind that each level is something like ten minutes long and split into sections complete with a boss battle. The whole point of the game is utter mastery of the beats, so you will want to replay the game over and over in order to see what kind of score you can rack up. The multiplayer is very fun because up to four players are forced to work together with insanely small paddles in order to complete the same levels. There are many times when you all have to place your paddle pieces side by side, just to deflect some of the bigger beats. This allows for a lot of communication and teambuilding. In fact, this game would be a perfect teambuilding exercise for any job or school that does that sort of thing.

The graphics and sound are spot on for what you would expect from something like this, and the sound especially is the focal point of the game. Since you are essentially using the paddle to create music, the music has been tailored to start out very easy and build at every point until you are in the midst of a full on techno song. Not since Rez have you had the chance to play music in such a seemingly passive and awesome way. The best way to describe the music would be something like a classic industrial sound; I don’t mean Rammstein or Nine Inch nails, but minimalist ambient synth music. If you have ever heard bands like Throbbing Gristle, you know what I’m saying. The music had an almost hypnotic energy to it, one which I felt myself almost meditating to as I played the game.

In all honesty it’s almost better to show to show you a video than try to explain it.

Bit.Trip.Beat. for Wiiware is an amazing experience if you are into retro gaming or rhythm games, and is probably my favorite WiiWare game of the year. For a measly six bucks, you can have one of the most imaginative and fun games out there. Although it only has three levels, the game is centered on high scores, and should be played as such, and don’t forget the multiplayer. Bottom line is: this is a game not to be missed.