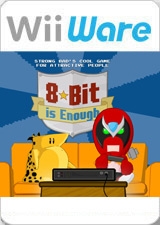 Sadly, it's the end of an era.

8-bit is Enough is the final episode in the Strong Bad’s Cool Game for Attractive People series. After five amazing adventures I have to admit that my own skepticism has been transformed, and I am now a believer. Telltale Games faithfully brought the wacky internet cartoon to a new media, and we can only wish for more to come in the future. Episode 5 is a bittersweet moment in gaming. It ends a season of great adventure games and we hate to see it go, but it also brings together some of the long standing staples of the series in a true Homestar Runner conclusion.

8-bit is Enough starts off right were Episode 4 leaves off, with a disgruntled crowd’s ire being directed at Strong Bad for the horrible cinematic disaster that was Dangeresque 3. In a failed attempt to escape, Strong Bad breaks the Trogdor arcade; causing it to come alive and immediately begin a “burininating rampage.” Strong Bad then makes another huge mistake by attempting to fix the Trogdor arcade, which results in Trogdor materializing in his true form and the very fabric of reality melding with the retro video game world. All I can say to such a premise is – “yes!”

Like its predecessors, 8-bit is Enough brings back the Brothers Chaps as the voice actors. Their voice acting style remains humorous and of the finest quality. In Episode 5 the animation returns to the quality of Episodes before Dangeresque 3. This is not disappointing as it really serves the retro game aesthetic well. However, this episode does feature much improved sound design, with the beeps and bloops that defined many of our childhoods faithfully rendered in 8-bit glory. The interesting aspects of presentation in this episode are the variety of 8-bit-themed set pieces. These set pieces will tickle that nostalgia gland in the deepest part of your brain. The animation may not be as good as Episode 4, but the overall presentation is on par due to the sound design and several set pieces.

Strong Bad’s Cool Game for Attractive People is played like all point and click adventure games. You navigate each area by using the pointer and clicking the desired destination. Pointing on characters will initiate context-sensitive dialogue trees. The pointer is also used to activate items and explore for secrets. The game also has many puzzles that can be solved by using collected items or by paying attention to clues in the dialogue. Exploration and conversation are the two keys that you will need to master in order to complete the game.

This episode also features different puzzle designs which are interesting but still far too easy. Many puzzles are centered on the game world you are in at the moment. Doing this is great fan service for retro game lovers, but it also exposes the limitations of the point and click adventure. Simply put, pointing and clicking your way through a platformer or arcade game feels wrong.

Staples of the past four episodes are also noticeably missing. There is no searching for secrets with the Limozeen Metal Detector and I have found no Teen Girl Squad Cards. Instead, value is added by being able to play and explore many more games in this episode. Also, finding secrets is more challenging and requires using items you have in different scenarios.

Strong Bad’s Cool Game for Attractive People-Episode 5: 8-bit is Enough is destined to be one of the most memorable episodes. It is definitely the most fan-centric of the five. This episode finally adds fan service we have been drooling for since Episode 1 and also changes up the puzzle designs. It’s not the funniest episode, but it’s definitely one of the better ones. Still, one problem persists - the game is $10 USD and only offers a couple of hours of gameplay. Homestar Runner fans need not worry, as the experience is well worth the price of admission, but the average consumer should wait until all five episodes are on sale on Steam.