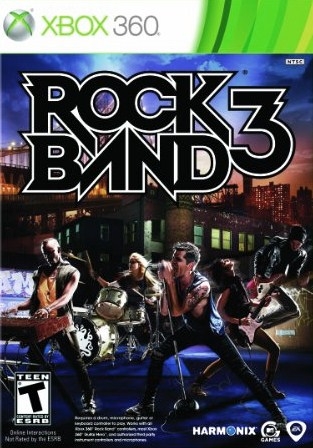 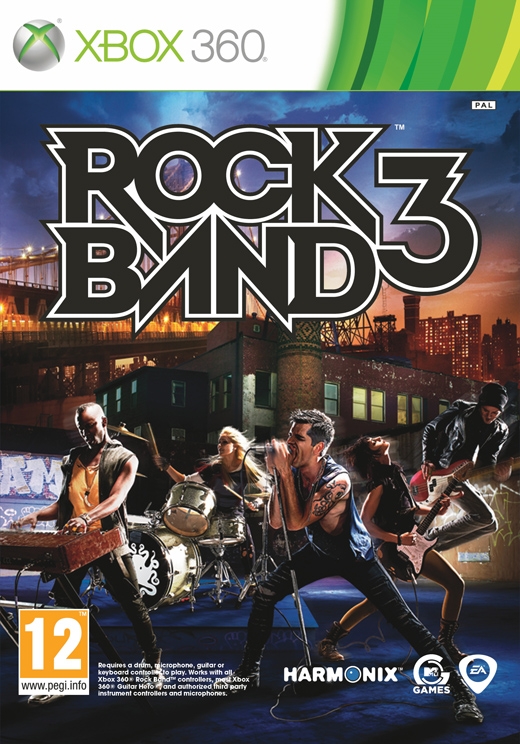 My ROCK runneth over.

The music game genre has been dying a slow sales death over the last couple years. The original Guitar Hero games sold well, as did the first Rock Band title. Since then, each subsequent release in the genre has seen steadily falling sales. Nonetheless, Harmonix brings us Rock Band 3, with more new content than a John Mayer live album. Rock Band 3 follows the same basic mechanic as previous genres. Work your way through a slew of tracks with colored gems coming down a highway as you use your plastic toy instruments to replicate real rock or pop bands. Either work your way through a virtual career or grab your friends and rock the house. That’s where Rock Band 3’s similarities with its predecessors end. Pro Modes, keyboard, 7 players and a host of small changes make Rock Band 3 truly feel like a completely different game.The most hyped new addition is the keyboard. Currently 66 of the 83 songs in the game support keyboard, though there is some talk that Harmonix may add keyboard to existing DLC, possibly for a small charge. The peripheral is a small, hobby-size keyboard with a short keytar-like handle. The overdrive button is on the handle and there is a strap so it can be worn and played like a keytar. Standard key mode puts all the gems on five white keys, allowing you to play the game on any difficulty with just one hand on the keyboard and one on the overdrive button. Within an hour, I was doing fairly well on this mode on expert. Standard keys really feel gimmicky in that respect; it doesn’t provide the same challenge or visceral feel of rocking out that the other instruments provide. Pro Mode definitely fixes the challenge issue, but perhaps too much so. It takes a lot of time to adapt to using keys in Pro Mode. The highway always shows a grouping of 10 white keys and the black keys that fall between them, but it takes a lot of time to figure out where your fingers are in relation to what’s on screen. My girlfriend plays piano and was very flustered by it. Harmonix really missed an opportunity to bridge a gap between game and music by not offering scrolling music bars as a choice for playing Pro Keys. Real piano players can read music and move their fingers accordingly. Not providing this option not only excludes real piano players but doesn’t teach piano laymen how to play the real thing. That said, Pro Keys for a non-piano player is fun, challenging, and brings back that visceral music feel to the instrument, rendering standard keys obsolete.Hardware was not provided for Pro Modes on drums or guitar, so those features will not be reviewed.Bringing in keyboards, as well as vocal harmonies (used in The Beatles: Rock Band and Green Day: Rock Band), allows for up to seven people to play in the band at once. While this sounds awesome, it uncovers a big limitation of the consoles. In order to play with more than four players or even a band made up of the four instruments (drums, guitar, bass, and keys), the vocalist(s) have to be excluded from scoring. The consoles only allow four players at once. Using four instruments disables online play and puts the vocals in karaoke mode. In this mode, vocals aren’t scored, don’t use a controller, and don’t have overdrive. This means the vocalist(s) won’t be contributing to the band’s performance and can’t save failing band members. Online bands can only consist of four players, though one of those can be three vocalists signed in as one of the players. Ultimately, this misstep isn’t the fault of Harmonix, but a physical limitation of the current technology. Cross your fingers the next generation consoles will allow more than four players locally. The career mode has been reworked into a very minimalist series of Road Challenges. Each Road Challenge has a series of small setlists to finish and each of those setlists gives you options. There are pre-built lists, random lists, or build-your-own lists for nearly every venue. The randomizers will sometimes change depending on the DLC you have on your machine. My export of Green Day: Rock Band brought up a random Green Day list once and my plethora of Coheed & Cambria DLC offered up a similar choice. These Road Challenges are much better organized than previous career modes and can be left and continued at any time.Quickplay has also seen a slight facelift. The list of songs can be filtered in any way you choose. Want to see songs that support keys? Done. Want to just see songs you exported from the original Rock Band? No problem. Leaderboard integration is seamless for any instrument, pro-instrument, or full band. The game has a variety of built-in setlists, you can build random setlists, and registering your game online will give you access to Harmonix competitive setlists with their own leaderboards.

The list of updates goes on and on. Drop-in and drop-out can be done by any player from any screen. Each player can change their own difficulty at any time and the game makes it easy for players to swap instruments on the fly. The auto-tune technology implemented into the vocals has made the pitch detection more accurate, bringing the vocal difficulty on par with the Guitar Hero games. One of my favorite new additions is the orange button being brought into medium guitar difficulty occasionally. This breaks players of the bad habits formed by constantly playing on medium difficulty.Production values for this new Rock Band are very high. Gone are the simple animated cutscenes from before. The game starts with a very cool live-action intro, and then proceeds through most of the game with cutscenes using the characters in your band, including all the crazy costumes and tattoos you can throw on them. The venues are many and varied. Some of these include trippy non-venues like those featured in The Beatles: Rock Band during their drug-induced years. Character creation still provides a wide range of looks from chic and stylish to obnoxious and unrealistic. Sound is pitch-perfect as usual and the visuals for highways are the same reliable system, but now offering you options to reduce things like sound and visual effects for overdrive or missed notes.Value for Rock Band 3 is one of the highest among all games. There are 83 tracks on the disc, plus compatibility for all DLC bought for Rock Band, Rock Band 2, orLEGO Rock Band. Songs can also be imported from all previous games except The Beatles: Rock Band, making an available library of over 2,000 songs that will keep growing with further DLC. With all the different instruments, the game can be played through alone, with friends, or with a gathering of people online. Gone are the online dueling modes, however, which is a notable loss. Rock Band 3 sticks to what it does best and yet introduces so many new features that it at once feels like the same, comfortable experience you expect and a completely new game at the same time. The game is brimming with new features and while some could have been executed a little better, they all combine for a big step forward for the franchise.