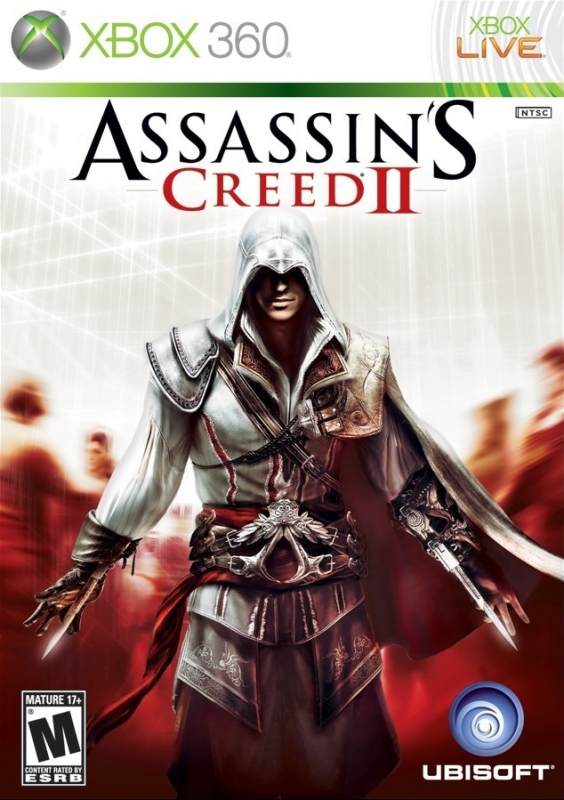 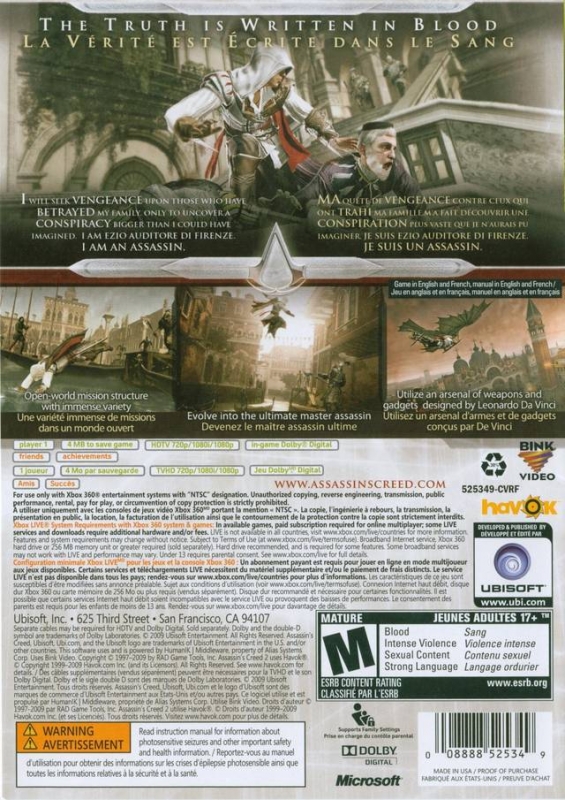 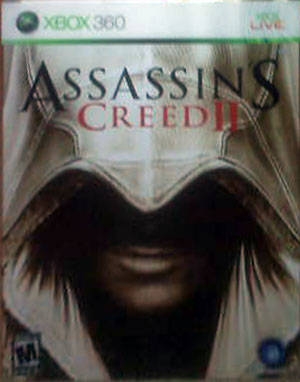 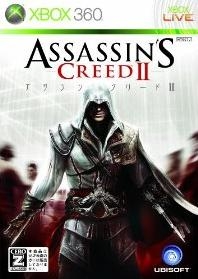 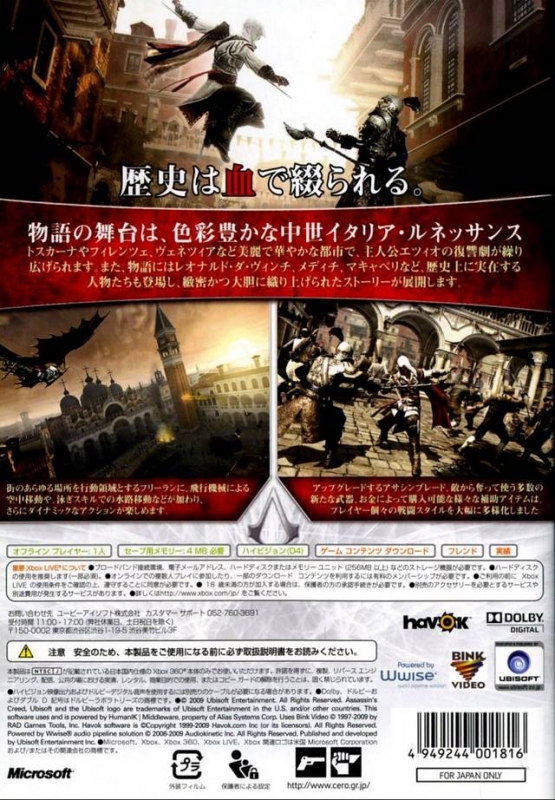 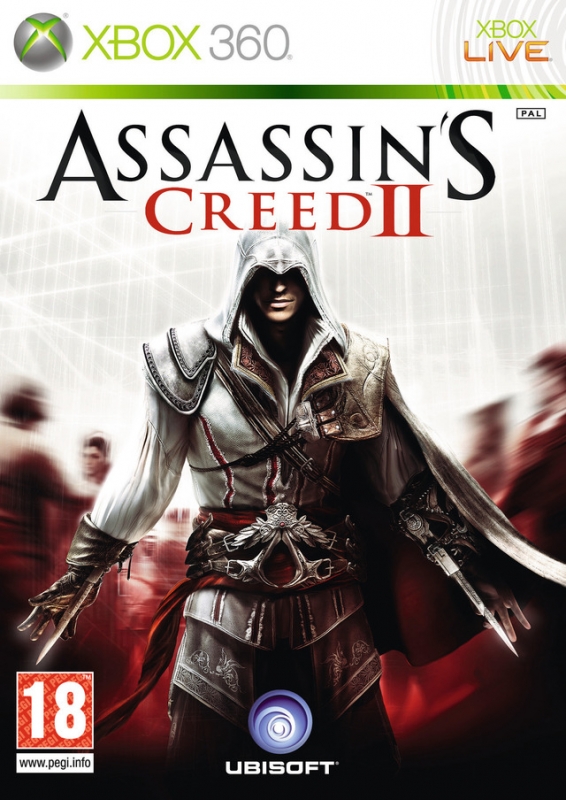 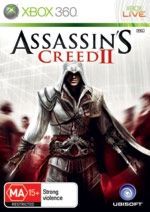 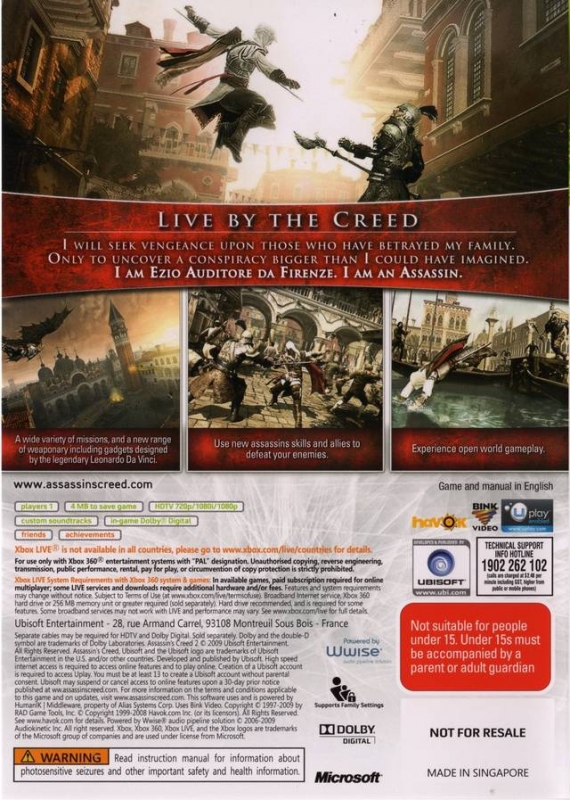 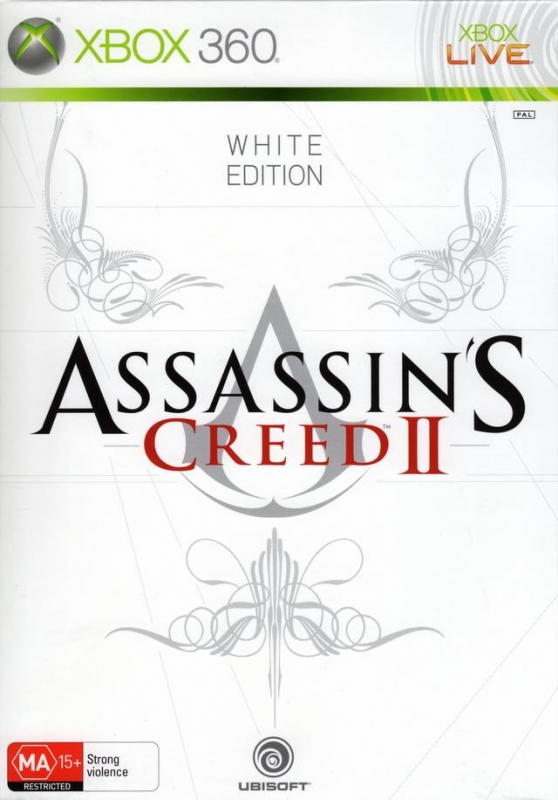 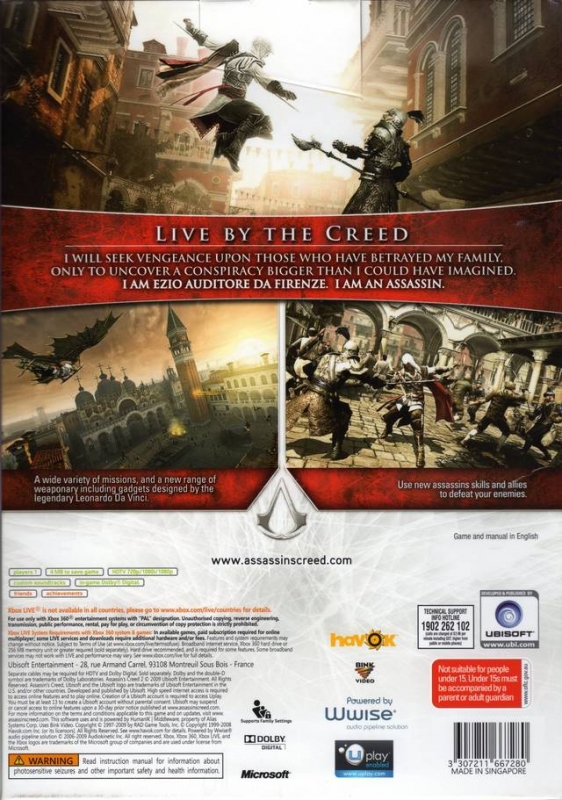 Two years have made a big change in the quality of this franchise.
The holiday season of releases draws to a close with one more blockbuster. The sequel to the multi-million selling Assassin’s Creed is here, but while Assassin’s Creed was a huge commercial success it fell flat in the eyes of many critics. It’s evident while playing Assassin’s Creed II that Ubisoft were listening to their fans and critics, but is it enough to convert those disappointed with the original?

Assassin’s Creed II picks up in literally the exact scene the first game left off. Desmond, using Eagle Vision outside of the Animus, stares at the mysterious writing left by his predecessor. A series of events which I won’t spoil for those who obsess about such things then leads Desmond back into the animus, this time to train with another ancestor, Ezio Auditore.

Although Desmond is the main character in the present, you spend the vast majority of the game as Ezio. Assassin’s Creed II does not constantly interrupt your historical adventure like its predecessor did, and the plot benefits greatly from this. You’ll follow Ezio’s quest for revenge and maturation as an assassin through 10 years of Ezio’s life, largely uninterrupted, until one final time skip takes you to the very end of the 15th century for your final confrontation.
The plot is exceedingly well-paced, especially in comparison to the first game, which was notorious for its slow progression and repetitive, predictable elements. All the characters are good, and even the enemies have more personality. Even Desmond’s few appearances are an enormous improvement over the original, except for the very beginning of the game.

Assassin’s Creed II seems to have stripped the gameplay of the original Assassin’s Creed down to its very basics and then completely rebuilt all the additional elements. Your primary method of assassination is still the hidden blade, and your main goal is still to kill a group of templars, but the information gathering and plethora of side quests are all but gone. Combat is still mostly a series of timing mini-games, but you now have many more options for taking down enemies or escaping.

Like the first game, Assassin’s Creed II is a sandbox game that takes place across multiple large sandboxes. The main areas of Italy you will be free to explore are Florence, Romagna, Monteriggioni, San Gimignano (and the surrounding Tuscan countryside), and of course the much-advertised Venice. You’ll find plenty to do in each area including treasure hunting and side-missions in addition to the main quest line.

Free running functions exactly as it did in Assassin’s Creed, and it’s still a very satisfying platforming experience. Assassin’s Creed II features a lot more platforming challenges than the first had, and some Prince of Persia style puzzles using the free running system. However, the lack of precision in free running becomes more apparent in this game as you have to use it more often for the platforming puzzles, and you may find yourself frustrated with it at times.

Any information you need for your missions will be part of the main quest-line, and there is far more variety to these assassinations now. Very rarely are you forced to assassinate your target in one specific way, and even more rarely are you forced into combat during an assassination. Rather, once you get to the target’s location, how you choose to defeat your enemy is almost entirely up to you, and targets can be killed without ever riling the guards much of the time. Side missions still exist, but there are far less of them and they are really just there to give you some extra entertainment out of the package.

Ezio has any number of deadly tools at his disposal. A large upgrade from Altair’s arsenal, Ezio has access to poison, dual hidden blades, smoke bombs, a sword or hammer, a dagger, throwing knives, and even a hidden wrist gun. In combat, Ezio can also fight unarmed, giving him the option to disarm his enemies with a successful counter and use their weapons against them. Ezio’s new tools give him a large advantage in combat. He can now assassinate two enemies at once, and in the shock of the initial strike get off another kill or two before ever having to enter combat mode.

Stealth killing options are also greatly increased. Ezio’s smoke bombs not only allow for quick escapes, but can also be used to assassinate under cover after you’ve already entered combat. The gun gives an instant kill from a relatively long range, and poison can be used to make an enemy go crazy, creating a distraction before he dies. Ezio can also toss money to distract guards and gather crowds to conceal himself. Blending can now be done with any group of 3 or more people, not just monks. Prostitutes can be hired to distract guards, and mercenaries can be hired to assist you in combat.

Unfortunately combat is still pretty boring. The wide variety of tools don’t distract from the fact that it’s basically still nothing but a rhythm and timing game when you are forced into fighting. Luckily you can usually get out of it by fleeing or using smoke bombs to stealth kill, but odds are if you didn’t like the combat you still won’t like it. Nevertheless, with all of Ezio’s tools, Assassin’s Creed II does an excellent job of making you feel like an elite assassin, and the wide variety of options to avoid combat is much appreciated.
The final new gameplay element is the addition of money and items to the game. Money is acquired by completing missions, but the easiest way to get it is to spend money upgrading your villa. The taxes paid on it as it’s upgraded will gradually increase, and you can stop by periodically to collect your earnings. By halfway through the game you’ll have a gross surplus of cash, and you will never run out again. With this money you can buy weapons, armor, new colors for your clothes, medicine, poison, and paintings for the villa. You can also purchase treasure maps in each city which of course lead to more money, which you will not need at all.

Of course Assassin’s Creed II is just as much about the presentation as the gameplay. The game runs on the original Assassin’s Creed engine, but isn’t nearly as buggy as the first. The visuals which were top of the industry in 2007 are still great, but no longer the best. However, the cities are breathtaking recreations of their real life counter-parts, and there is a great variety of different styles to them. The voice acting is great, but the game does lean a bit too heavily on the incidental Italian added into the English conversation. Be sure to play with subtitles on so you don’t miss anything. The music is good and appropriate for the game, but it’s nothing groundbreaking.

There’s certainly a lot of value in Assassin’s Creed II. The main campaign will take most people a little over 20 hours, but there are 30-40 hours available in total for the completionists who want to collect everything, depending on how fast you are. The game is pretty easy however, and there aren’t any additional difficulty options available for those looking for more of a challenge. Odds are you won’t die except from the occasional free running screw-up.

Assassin’s Creed II does not revolutionize everything in the first game. Rather, it feels like what the first game should have been, and is indeed a massive improvement. More freedom is given to you to act like an assassin, and there is much less emphasis on combat. Gamers will find much more variety in the gameplay, and the repetitive mission structure is gone. While the combat system could still use a lot of work, this is an epic and gorgeous adventure that both fans and skeptics of the first will enjoy.