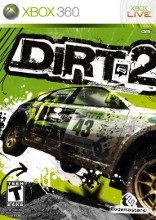 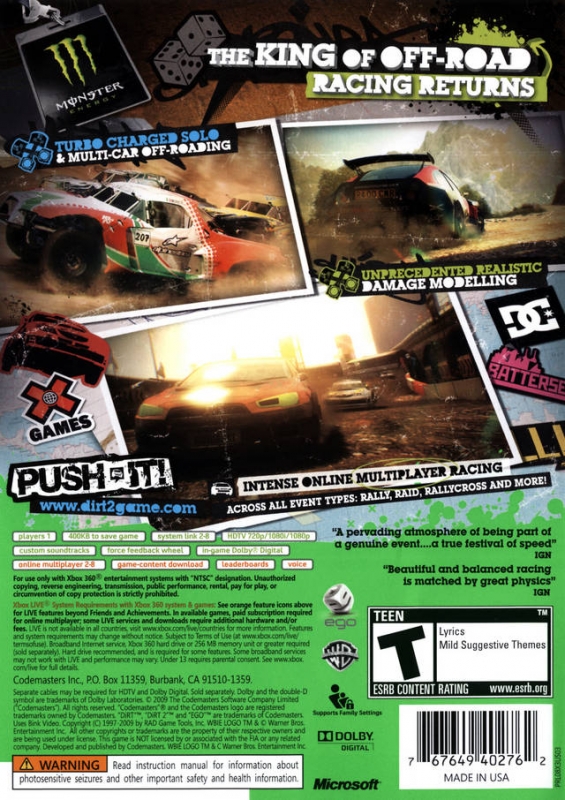 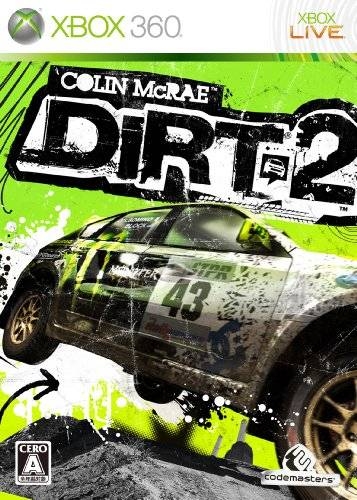 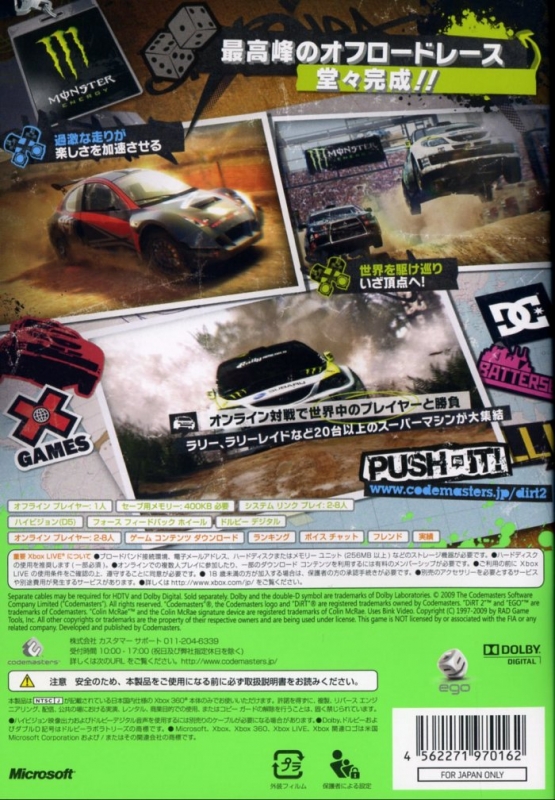 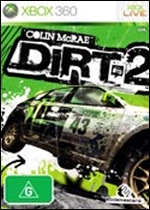 Make way for the prettiest dirt around.

It’s been roughly two years since the release of the [url=http://www.vgchartz.com/games/game.php?id=6710]original DiRT[/url], a year since the release of its racing cousin [url=http://www.vgchartz.com/games/game.php?id=17012]GRID[/url], and now we have DiRT 2. The reason I mention GRID, other than to once again tout its excellence, is because DiRT 2 incorporates some of the features used in GRID and adopts a stylistic change which makes DiRT 2 much livelier than its predecessor. 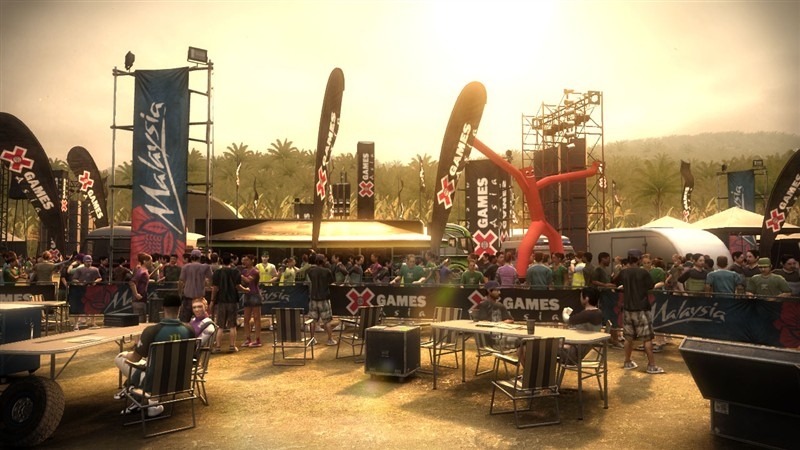 The overall theme is reminiscent of the MotorStorm ‘festival’ concept, except with a rally setting and with you actually placed in the middle of it all. The idea is that you’re an up-and-coming rally racer; touring the world and competing in events. The menus are set during the downtime, where the vehicles are repaired and made ready for the next event. Rally fans surround your team’s area and there’s plenty going on all around you. There’s a party-like atmosphere, with the soundtrack playing in the distance and the country you’re currently racing in acting as the scenic backdrop. Clearly a lot of work has been put into the design of the menu system; there’s a concerted attempt take you away from the monotony of sifting through sterile menu screens. Instead, DiRT 2 attempts to actually give you a little taste of the rally atmosphere and put you firmly in character, but this only works the first couple of times you play the game, after that it just feels like any other menu system.

Head into your slightly run-down trailer and you can actually start racing. Once inside, you’re presented with all of your typical menu options (more on the extra modes later), but the world map will likely be the main focus of attention. The map and the surrounding posters list the countries you can access and the events you can compete in. As you complete events, you earn both experience and money. The experience unlocks additional countries and events, whilst earning money allows you to purchase additional vehicles and vehicle upgrades. It’s a formula that’s now become pretty standard for racers, and it works well here. You’re always encouraged to complete just one more event in order to fill that experience bar and unlock some more events. There are also little in-game challenges which allow you to earn extra experience as you’re racing, e.g. driving a certain amount of miles or overtaking a set number of opponents.

The controls have been slightly improved since DiRT. They’re still very loose and touchy, as one imagines the real thing to be like, and this makes DiRT 2 both hard to tame but easy to pick up and play at the same time. The artificial central pivot from DiRT now seems to have been removed, or at least is nowhere near as noticeable here. Different surfaces all feel suitably distinct and the handling is mixed up nicely. My one gripe is with the handling of the larger vehicles (the buggies and various racing trucks), which are really hard to get to grips with, oversteering easily and bouncing around the track like drunken bunny rabbits. Indeed the focus on events beyond pure rally, which began in DiRT, continues here, and for some this will be a little disappointing. 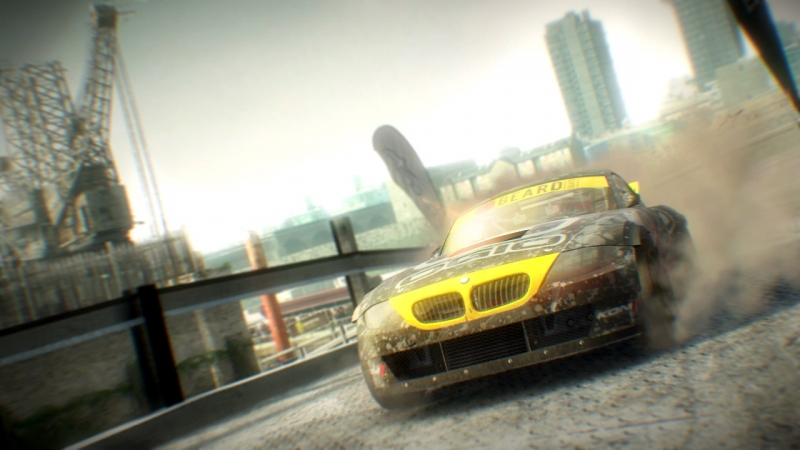 Another area of improvement comes in the form of the vehicles included. Gone are the big rigs (which always looked like fun in DiRT, but ended up being tiresome and slow-paced), instead the various forms of rally, racing truck and buggy racing are brought wholly to the fore. The criticism I levelled at [b]the original[/b] DiRT in my review was that races involving the bulkier vehicles weren’t as enjoyable as those involving the rally cars. Again this is an issue for me, with races involving buggies and racing trucks often proving to be the low points of the game. However, their wholesale removal really would make DiRT an off-road version of GRID, which is perhaps not the route Codemasters want to take with the series.

The AI seems more active this time around, with AI opponents holding their lines with a bit more tenacity and seeking revenge if you ram into them. As with GRID, they make mistakes, and when combined with the damage system this can make almost every single race unique and exciting. I say 'almost' because DiRT 2 didn't quite give me the thrill I get when I play GRID.  Perhaps it's because the rally courses with AI opponents here tend to be much smaller and offer a less exhilarating high-speed experience, and less carnage too. The traditional rally courses, on the other hand, most certainly are exhilarating, offering beautiful scenery and long winding courses that allow you to go flat out, which can certainly test your faith in your twitch-driving abilities. The flashback system from GRID is also present, so depending on which difficulty setting you select you may have the option to pause the action at any point and rewind a few seconds in order to correct a fatal mistake.

Most of the race types from the original make an appearance. Also, on top of the standard rally events and 8-car races, there are a series of special events which you’ll encounter less frequently. There are ‘Throwdowns’, which are essentially races against the rally pros. ‘Gatecrasher’ events pit you against a timer, and the objective is to complete the course as quickly as possible whilst hitting gates in order to extend the clock. ‘Domination’ events split races into sectors and points are awarded for your position in each sector; the person with the fastest completion time for a given sector gets the most points, and the one with the slowest time gets the least.  The player with the most points at the end of the race wins. Finally, ‘Last Man Standing’ events are elimination races, where the person in last place is eliminated when a timer runs out, and this continues until only one person remains. 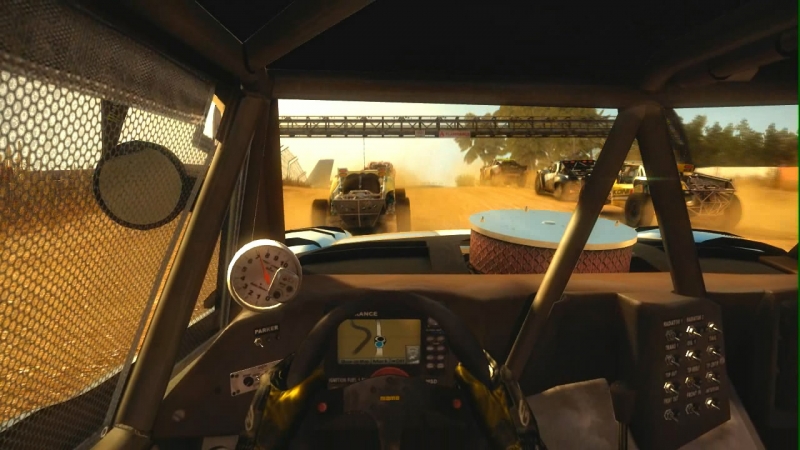 Graphics are DiRT 2’s strong point. The maps are set across nine locations (China, Japan, London, Utah, LA, Malaysia, Baja, Morocco, and Croatia). Each location has a number of map variations to its name, with distinct terrain and settings which nicely complement the relevant location. Malaysia, for example, is host to lush jungle-based tracks dominated by mud which sprays up beautifully in a vehicle’s wake, whilst the tracks set in Utah offer huge stretches of dirt track set against a vast, barren desert backdrop.

There’s not much to criticise graphically; this is certainly one of most visually impressive racers on the market, full of lush colours, detailed environments and great damage modelling. It doesn’t have the photo-realism of Gran Turismo 5: Prologue, nor is the in-car view as impressive as it is there, but it feels much more graphically complete thanks to the damage modelling, interactive environments, and varied settings. There are also neat little touches, such as the fantastic water effects which blur your in-car vision, and wiper blades which actually work (well, providing you haven’t lost your entire windshield in a collision).

As you would expect, the sound quality is also superb. There’s a nice up-beat rock soundtrack which plays nicely in the background during the menu and loading screens, serving to bolster the party-like feel of the rally festival. As you would expect, each vehicle has its own unique sounds, and during the point-to-point rally events you’re given directions by the co-driver of your choosing. The race chatter from rally stars, on the other hand, is extremely cheesy and cringe-worthy; props to Codemasters for making the effort to record plenty of lines of dialogue from the likes of Travis Pastrana and Dave Mirra, but they really should have saved their time and foregone it entirely... 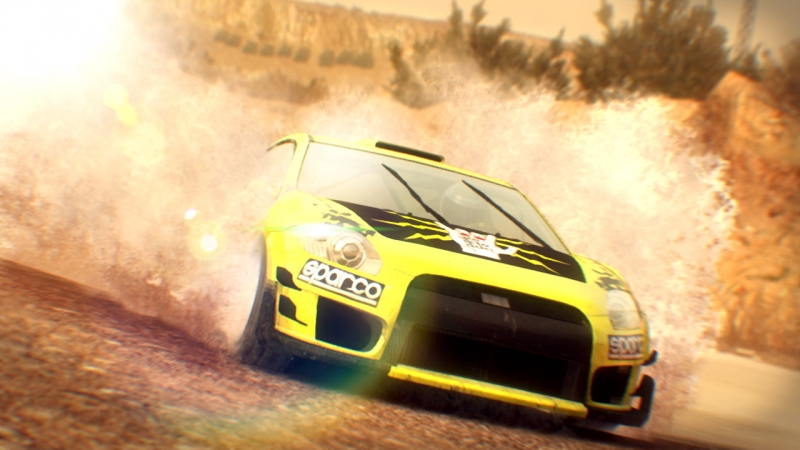 Codemasters have improved upon the DiRT formula in almost every respect, and that continues in the category of value. The main career mode holds up well, with the aforementioned experience system working well to keep the unlockables and extras flowing, from extra vehicles, tracks and events, to customization options like extra liveries, car horns, and in-car items like fluffy dice. It took me 14 hours to complete the career mode, and there are around 150 events to complete throughout (with each usually consisting of between 1 and 3 races). This is pretty much on a par with other modern off-road racers, like the original DiRT and the MotorStorm series.

It’s the online mode where the biggest improvement has been made, however, with almost all of the racing types available in the career mode also being available to play against other users. The online mode also has its own experience and challenge system. You can play in a jam session, which is effectively a custom online mode, where you’re free to adjust the settings to your liking. Or you can head on over to the pro tour, where you compete in pre-determined races to earn experience and rank up. Although this setup in and of itself is a big improvement over the original DiRT, it still falls short of other racers due to the rigidity of the ranked match system (where almost all of the major race settings are predetermined by the computer). The upshot to this is that actually getting into a race is extremely quick and easy.

Beyond those two main modes, you can also play on all 41 tracks in both a Free Play mode (which, as you might expect, allows you to set the race options to your liking) and a Time Trial mode. The Time Trial mode includes universal and friend leaderboards, as well as downloadable ghosts. Unfortunately at present these ghosts cannot be accessed by most users, although Codemasters are working on a fix. There’s no split-screen either, so if you’re after local play then you’re going to have to look elsewhere. After that, there’s very little 'missing' per se. I'll point out the lack of a movie theatre to save your replays and the limited nature of the vehicle customisation options, but these are very minor complaints. 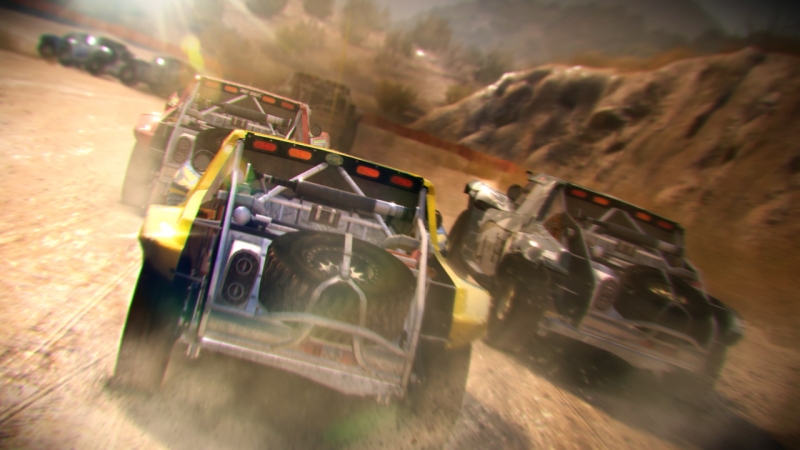 As with DiRT, there is an issue with longevity. Just to be clear, DiRT 2 offers much more longevity than the original, but there are still some issues holding it back.  First of all, there’s the map count. 41 tracks sounds pretty impressive at face value, but unfortunately most of these are just alternative layouts rather than unique tracks. Forza Motorsport 2 owners will be familiar with this concept, as DiRT 2 is just like that game in this one respect: the 9 locales listed earlier in the review act as the backdrops for all 41 tracks, so all of the different map layouts within each locale are often simply variations on one another. Combine this with the somewhat disappointing buggy and racing truck segments, and a ranked online mode which is far too rigid, and you’re still left with a lot of room for improvement, despite the strides made since the original DiRT.

DiRT 2 moves the series in the right direction, but it falls short of the excellence Codemasters have demonstrated they are capable of achieving. The graphics are brilliant, and the art style and effects are often sumptuous. The rally events truly convey a sense of speed and lack of control that seems true to life, but the buggy and truck events are marred by finicky controls and a less enjoyable racing experience overall. The career mode has been nicely revamped so that it keeps you engaged throughout, and there’s a proper online mode this time around as well. Less repetitive track variations and a more flexible ranked online mode would both have been welcomed, but regardless, DiRT fans should certainly be pleased by the outcome of DiRT 2. More general racing fans may find that DiRT 2 is fantastic in short bursts, but will reveal its weaknesses over time.