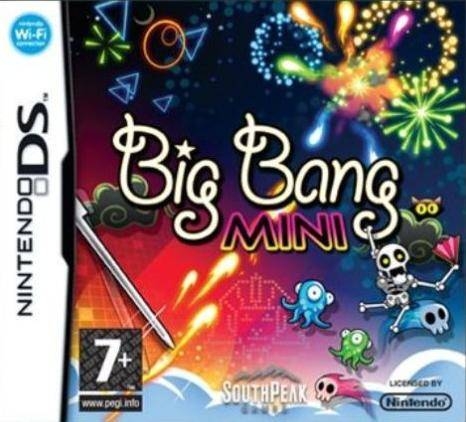 We review the new, firework-infused shoot-em-up for the DS.

Big Bang Mini is the second game from the small French-based developer Arkedo Studio. Big Bang Mini is, at its most basic, a fireworks-infused shoot-em-up which hints at inspiration from modern day arcade shooters like Geometry Wars and Space Invaders. 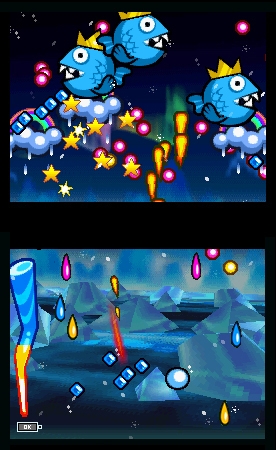 The aim of the game is to shoot fireworks at the top screen in order to damage and destroy the targets above. To shoot fireworks you strike the stylus upwards in the same style as lighting a match. If you hit an enemy you inflict damage and after enough hits the enemy is destroyed and a star will float down towards the bottom screen for you to pick up. Once you’ve collected enough stars the level is complete and you can move on to the bonus round, which consists of literally connecting dots with your stylus. It starts off simple (just like the main game) but becomes surprisingly difficult the more you progress through the game. Once you’ve passed or failed the bonus round you then unlock the next level in the game.

You collect the falling stars with a little icon/ship on the bottom screen. You move the icon by touching and dragging it with the stylus. If your firework rocket misses the enemy then it will explode and leave a host of sparks that will float down towards the bottom screen, alongside any stars you may have triggered. You have to avoid these sparks (and any enemy fire) by moving your little icon around the bottom screen (otherwise you’ll have to restart the level), but you also have to manoeuvre the icon to collect stars at the same time. And because the more rockets you fire that fail to hit a target the more sparks you trigger, you have to strike a careful balance between spamming enough rockets to destroy all the enemies, but not so many that the bottom screen is swamped with sparks that you need to avoid.

You can't shoot and move. In order to fire rockets you have to let go of your ship, and in order to move your ship you have to stop firing rockets, so you’ll soon find yourself micro-managing between dodging falling debris and enemy fire and flicking the stylus to fire off rockets. It can be a little awkward at first, but you soon develop a steady rhythm of striking upwards, then moving the icon, and so on until you collect enough stars. 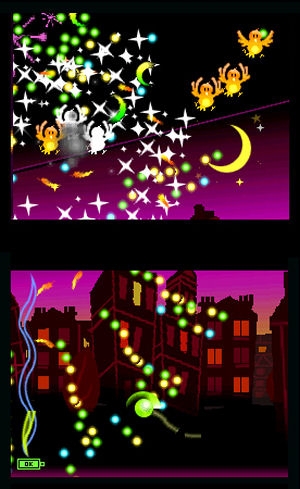 This all makes for an interesting take on the modern arcade shooter, however, there a few problems with the gameplay. The first problem relates to the lack of pin-point accuracy you get with the stylus. The icon is quite small, which can make it hard to grab in a hurry. I would often try to grab the icon quite quickly in order to avoid incoming fire, only to miss it when I thought I had clearly tapped on it, resulting in a frustrating death. In order to avoid this you need to make sure you go to move the icon well ahead of time, so you can keep trying to grab the icon if the game doesn’t recognise your input, which obviously affects your rate of fire.

Secondly, the touch screen doesn't always accurately map out your swiping gestures with the stylus. The idea is that you flick the stylus across the screen in the direction of the bad guys, but the rocket will often go off just a little to the right or left of where you actually swiped. So again, you have to adapt your play style to pre-empt a design problem.

The final issue is that because the action is so frenetic, all of your attention is focused completely on the bottom screen, where you move your icon around and where you fire your rockets. This means there’s no time to enjoy your successful firework animations, the designs of the enemy characters, or the interesting backgrounds. Not only that, it also means you won’t be looking at where the enemies are on the top screen. The only way to kill an enemy quickly becomes to fire blindly whenever you get the chance, which removes the need to aim precisely and means there’s no real strategy to the gameplay. You quickly realise that all you’re doing is flicking off rockets, moving the icon, and very little else.

The visual presentation here is strong, probably above average for a DS game. There’s a neon art style that’s reminiscent of recent arcade shooters like Geometry Wars and Galaga Legions, and there’s lots of colour and pretty explosions of fireworks. The enemy designs can be a bit rough around the edges though, and don’t look very substantial, and the backgrounds aren’t particularly impressive, but on the whole the graphics are fine. It’s just a shame that you won’t notice most of the action going on in the top screen because of the nature of the gameplay. 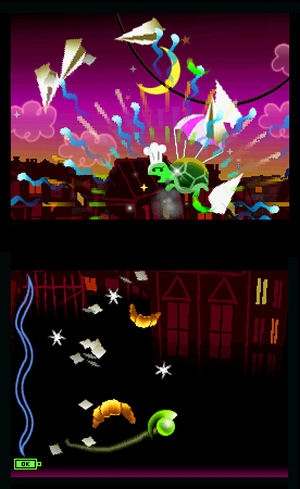 Each one of the nine regions has its own unique background, firework effects, enemies, level design, gameplay variation (for example, as you progress through the game you gain the ability to fire homing missiles, or draw a whirlwind to suck in enemy fire, and so on) and music track. There’s a fair amount of variation in enemy types as well, and they’re also region specific, so for example in the first region (Hong Kong) you have to attack dragons and pandas.

So there’s a lot of variation between the regions, but each region consists of ten levels and all of those features listed above remain the same from one level to another within the same region, with the exception of enemy designs, which vary as you progress through the levels within a region. This means that the level of variation within a given region is minimal – you hear the same music track, see the same background and play through the same level design – so be aware that there’s also quite a bit of repetition in the game. That said, the very fact that there are nine different regions is pretty impressive for a game in this genre, so don’t let that put you off.

The sound effects are good, although the speaker on the DS doesn’t really do them justice because it makes them a little tinny and distorted, so to really get the most out of the sound you might want to try playing with earphones. The fireworks scream and pop brilliantly. As I’ve already mentioned, the music is different for each world and is well crafted to suit the different setting. The only problem with this is that you end up having to listen to the same music style for ten levels before it changes, so the music does get repetitive, otherwise it’s a well implemented idea. The menu track is actually better than most of the in-game tracks, so I found myself taking a little longer than necessary to set up a game just to listen to it a little bit longer. 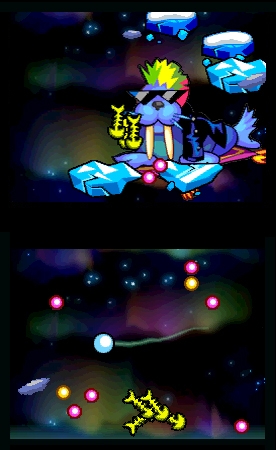 Big Bang Mini is roughly $20/£18, which is at the cheaper end of the spectrum for new DS games. For that money you get a total of 90 levels in the main game mode (nine different regions, ten levels per region, all of which have to be beaten in order to advance to the next region), with each level lasting between 30 seconds and a couple of minutes. As you would expect the difficulty increases the further in you get, so expect to have to play a lot of the levels several times before you’re able to complete them. So at the very least expect the game to take several hours to complete.

On top of the main mode there are several other bonus modes. First of all there’s a multiplayer mode, which is unlocked as soon as you complete the tutorial and allows you to battle against a friend using just a single copy of the game. Secondly there’s a rather basic ‘Relax’ mode, which you unlock if you manage to complete all of the bonus rounds, and allows you to watch all of the fireworks without having to worry about your icon getting hit by sparks. Thirdly there’s an alarm clock (no joke), which is exactly that, the game turns into an alarm clock which plays music from the game. Finally there’s a ‘Mission’ mode, which is the most substantial of all the unlockable modes and is unlocked by fully completing the main game. It’s basically an insane difficulty mode, where the game adopts a more retro graphical style and then throws constants waves of enemies at you, with the only objective being to score as many points as possible.

For $20/£18 Big Bang Mini is a surprisingly complete package. It may lack the addictive qualities that other arcade shooters have, but on whole it’s a polished game with an interesting concept that brings a slight twist to the genre. The graphics, sound and music are all well implemented and varied. The gameplay is simple and initially fun, although it does lose its sparkle as the game goes on, and it does become too repetitive. Some of the control options do hinder the gameplay experience, and that’s a slight disappointment, but the game often works well despite that. A solid addition to the DS library, at that price Big Bang Mini is well worth consideration.