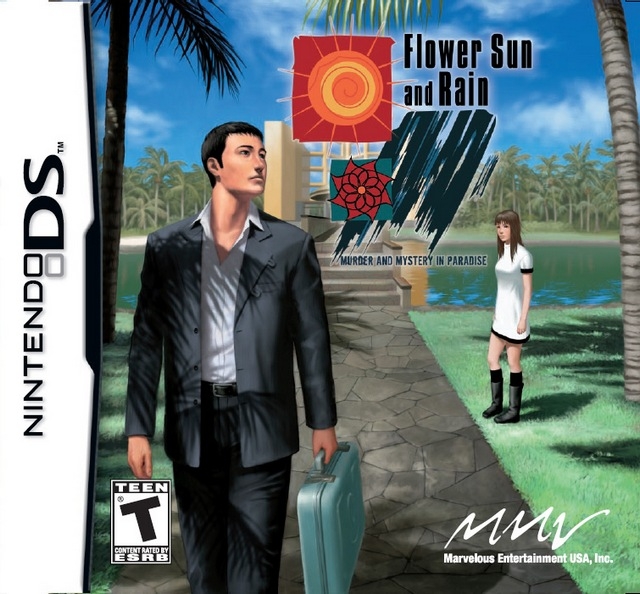 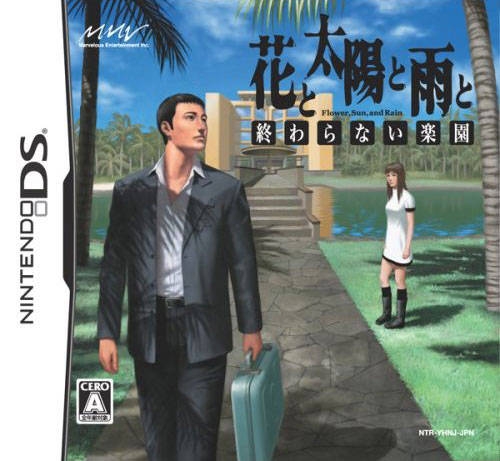 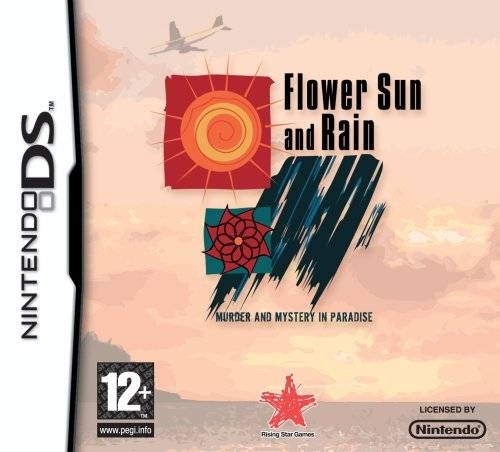 Hana to Taiyou to Ame to -Owaranai Rakuen-

Should you book a stay at hotel Flower, Sun, and Rain?

Flower, Sun, and Rain has finally made its way to the U.S., and in doing so it may have earned itself the right of being among the most niche titles ever to be placed onto a DS cartridge. Originally released as a PS2 title in Japan in 2001 and designed by Suda51 of Killer7 and No More Heroes fame, Flower, Sun, and Rain has a difficult time escaping not only subpar visuals and gameplay mechanics, but poor game design that would be deemed “bad” in any year. But if Flower, Sun, and Rain were being reviewed on a scale of sheer bizarreness the title would also receive a perfect score - again, in any year, as the title is an experience unlike anything I've ever seen.

At first glance, the plot for FSR seems to possess enough charm for fans of science fiction and fantasy alike. Players are thrust into the shoes of Sumio Mondo, a "searcher" who finds income tracking down client’s lost items. Name an item and Sumio will find it for you. In FSR he is tasked with the assignment of finding and defusing a terrorism-related time bomb at the fictional Lospass Island resort. It sounds easy enough, but as Sumio checks into the island’s Flower, Sun, and Rain hotel, things run a bit astray. Before he can even make it to the airport, Sumio gets caught up doing odd jobs for just about every person he meets, and at the end of the day the plane he was supposed to defuse explodes. As Sumio awakes the next day in his hotel, the bomb seems to have never exploded, giving Sumio not only another chance to retry his mission, but also a sense of bewilderment as to how the day has repeated itself. The same day continues to repeat itself again and again as Sumio never quite reaches the airport on time. Be advised that this is only the central plot as the game spouts a plethora of side paths and intricacies that mix up your days at the hotel.

At its core, FSR is a point-and-click adventure title; you progress through the game by solving an abundance of puzzles and there’s no game over. It’s easy enough if you can just get the puzzles down right? Wrong, because solving the puzzles in the game is neither fun, intuitive, or easy because of poor design. Every puzzle is solved with a suitcase called Catherine (because working with a Catherine is better than a Bob as Sumio points out in the beginning of the game) that Sumio carries. Under Sumio’s control, Catherine can “jack” into a person or item if the correct numerical code is inputted into the device. Once this has been done the object will do what you need it to do to progress the chapter, whether that be operating again or helping find people’s lost items. Where it all comes crashing down is just how these codes for Catherine are obtained. Just about every last one requires you to dig through the 40 plus page hotel guidebook you receive early in the game. As one page may talk about a camera and the next a wrestler or radio station, it’s up to you to skim through the guidebook, find a page that may relate to the puzzle at hand, and dig through the text on that particular page to find the numerical code (which is often times very difficult to find). Even worse is the fact that before the code can be entered, the player must choose which exact wire jack should be plugged into the object through a trial and error process that just wastes time. All of this will be done countless times before all is said and done, with each puzzle feeling more and more redundant.

When Sumio isn’t cracking codes with Catherine he’ll most likely be doing one of two things: talking to the island’s inhabitants or walking. The former is a no brainer for a point-and-click type title, but is largely boring and monotonous as well. First and foremost, finding the correct person to talk to in a certain situation can be extremely difficult given the many places and characters available. Secondly, conversations usually drag on much longer than necessary and talking to the wrong person or going to the wrong area gets old quickly. Thirdly, during dialogue, a scrambled voice over says every line of text for every person speaking, even during lines of “…”. These sound bytes, which should be familiar to fans of Killer7, try to keep players away from the common beeping sound that usually accommodates text in text heavy titles, but here it becomes annoying when you hear the same jumbled up sound bytes over and over again with no way to shut it off. More, if you find the Catherine-based puzzle solving a little quirky, just wait until you meet the people who operate the hotel. While dialogue is typically on the bland side, occasionally the conversation gives way to a joke or two or sheds some light on some of the interesting, shady characters that you would expect to see in a Suda51 title. As for the aforementioned walking, you’ll do it so much over such long distances that even the game begins to joke about these insane trips. Sure, it’s funny once or twice to have the game make you walk long distances, but to have to do it almost non-stop towards the latter half of the adventure is about as fun as making your way through Hyrule without Epona to shorten the journey.

The title’s outdated visuals are an eyesore by today’s standards, and while not terrible for DS hardware capabilities, they could have been touched up quite a bit more. Polygon counts are on the low end, and while one area’s texture work can be deemed acceptable, another’s may look downright awful. Controlling Sumio works well, with either the Control Pad or Touch Screen acting as Sumio’s main method of movement as he travels through Lospass Island on the top screen. Controlling Catherine is easily done with the Touch Screen as well, but can also be done with the Control Pad (just like everything else in the game) if the player wishes. Camera issues are also an unfortunately large part of travel: once the camera created an invisible wall as I ran towards it, preventing me from moving. Music in FSR is largely uninspired - literally, as many of its tracks are taken straight from famous composers like Bach and Gershwin. While this does fit into the offbeat mood of the game, the tracks aren’t anywhere near amazing remixes and the rest of the original music finds itself being just as unremarkable. There are also a couple of live-action video cutscenes at the beginning of the game, and although they are a couple minutes long, they don’t offer much insight into the title rather than more or less setting the vibrant and crazy tone the title is packed to the brim with.

Making your way through the 18 chapters of the game clocks in at about 10-15 hours just for the main story and objectives. FSR, much like it’s other Suda51 counterparts, eventually gives way to a confusing and downright difficult narrative to comprehend, but that wouldn’t be so bad if the poor gameplay didn’t drag on throughout each chapter. Twists and turns are everywhere in the narrative as the days keep passing, but more than likely you’ll just be wishing for the next day to be the last and for the game to finally end due to all of its heavy downfalls. If you so desire, there are also lost and found items to find on the side, and all searchable items will vary based on the chapter, with all of this being exclusive to the DS version of the title.

The way I see it, Flower, Sun, and Rain is only suitable for two types of audiences. The first, gamers that are willing to put aside a title’s flaws so they can experience an extremely niche yet original experience, or the second, the most hardcore of hardcore Suda51 fans, who most likely already fall into the first category anyway. It’s always exciting to play a game when you’ve never played one like it before, but if basic gameplay mechanics don’t work, as is the case with FSR, it can and will completely ruin the experience. In all honesty, it’s amazing the game made it to this side of the Pacific in the first place, and it goes to show you just how diverse the gaming population has become. With other previously Japanese exclusive Suda51 titles headed our way for DS, lets hope they can fare better than this one has, and until then, there are much better Suda games on the market already waiting to be picked up.