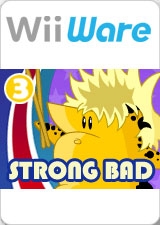 Strong Bad returns for his 3rd episode of point & click madness. Read the complete review inside.

To be complete: the game is fully called Strong Bad's Cool Game for Attractive People 3: Baddest of the Bands, but the titlebar wasn't prepared for titles like that.

Baddest of the Bands is the third episode of five in TellTale's series about Strong Bad, star of Homestar Runner's flash cartoons. The game itself is more an interactive cartoon than a game, but that's what it's meant to be. You point & click your way to advance in the story, collecting items and solving puzzles, with Strong Bad's hilarious humour as the main guide. This series is a great example of innovative use of the point & click genre and actually mixes two types of entertainment (cartoons and games) very well. You do have to like the style to truly enjoy this game, but people that like South Park or Family Guy will definitely enjoy Strong Bad. The game is played with the Wii remote and controls very smoothly.

The game starts when Strong Bad's Fun Machine breaks down. Since a life without his favorite videogame (Limozeen: Hot Babelian Odyssey) is of course unthinkable he needs to gather money to fix it. In order to achieve this he organizes a band contest in which he also participates with his own "band". All of this leads to a hilarious "Battle Royale of the Bands" where all the characters of the town will make an appearance, either as part of a band, the jury or the o-so-important security.

Not a lot has changed from the previous episodes. Sadly there are less minigames this time around, only one, and the ability to make your own "Teen Girl Squad" comics has been totally removed. But the puzzles are the best in the series yet, which more than makes up for these minor setbacks. The graphics are great, totally in the style of the cartoons. The sound is also well done, with great voice acting, cheesy Casio sounds and funny rocktunes. While there's a lot to do besides following the main storyline the game is still pretty short. You'll typically finish the main game in four hours and spend maybe two more on all the other fun things that can be done, like checking the typical Homestar Runner e-mails.

Strong Bad´s Cool Game for Attractive People 3: Baddest of the Bands is a very good addition to the WiiWare library and definitely will give you a great time, if you can stand five hours with Strong Bad and his companions.