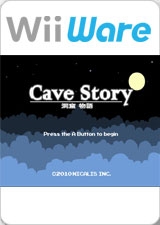 The greatest freeware game of all time is now on Wiiware!

Cave Story is a game which celebrates the much-revered era of retro gaming without landing in any of the usual pitfalls of similar games. It doesn't attempt to mimic any particular game, nor does it confront players with antiquated gaming conventions for the sake of being old-school. Instead, what we see here is a truce between the simplicity and style of the old and the game design smarts of the new. In case you're unaware, Cave Story is regarded as perhaps the most popular freeware game of all time. Now, it's available on WiiWare for twelve dollars, with some new additions. I decry the idea of devaluing the fun factor of a game by discussing price point, so I'm going to review Cave Story on its own merits and discuss my feelings on the changes. You can decide whether or not you want to pay for it.

The game starts out in medias res with an S.O.S in the form of an Instant Message conversation. Then, without any context given to us, we're immediately thrown into the game. Cave Story allows players to ease into the way the game works by playing around with it, rather than reading about it. This method of teaching is definitely more fun and informative than simply reading from a text box. By exploring the environments on our own, we discover how the controls work, which obstacles are dangerous, how to interact with objects in the background, and so on. And when our exploration takes us to the point where we obtain (i.e. steal) our first weapon, we learn how it works with the same tactile-kinesthetic approach: press button to shoot. Level up weapons by grabbing the triangle power-ups that enemies drop. Weapons level down by taking damage.

As soon as that's over, we're whisked right into the thick of the matter. The large subterranean area we find ourselves in is home to a race called the Mimiga, a kind of cross between a dog and a rabbit which walks on two legs. The Mimiga are scared of a person simply known as "The Doctor". This ominous figure comes to the village on occasion to kidnap the residents for experiments, and now only a mere six inhabitants remain. ...Well, seven, 'if you count Sue.' She's an outsider, so the panicked and xenophobic villagers are planning to offer her up to The Doctor at around the time our as-of-yet unnamed hero steps onto the screen.

It's hard to say why our hero involves himself in the affairs of the Mimiga, as he remains silent throughout the game. Whatever the reason is, though, we find ourselves traveling from place to place in order to serve and protect the few that have evaded capture thus far. So begins the real fun. As mentioned before, Cave Story is a fast-paced action-adventure game where players run, jump, and shoot stuff. It shouldn't be unfamiliar to anyone who has played a platformer with a gun. You run around and have a blast while blasting things on your way to the other side of the level, where you'll probably fight an intense boss battle.

What separates this game from the pack is the adventure element. Many people I know compare Cave Story to the Metroidvania series of games, which combines platforming with an expansive area map to explore. I wouldn't say it's quite like this, because the levels are much more segmented and linear. However, the game will ask players to run around and find things in order to progress through the levels. In one particular case, when our hero reaches the end of the level, he finds a person locked in a room, the door having no keyhole. So, we do a little bit of backtracking and gather various components to make a bomb that can blow the door open. While it's not the same as the extreme spelunking of Metroid and Castlevania, it's also not as straight-forward as going from point A to point B, allowing the game to shift us quickly from place to place. Cave Story gives us the feeling of exploration while being careful not to make it feel like our time is being wasted.

The only big complaint I can levy on Cave Story is that it occasionally punishes players for being curious. Video games in general teach players to be curious and explore their surroundings. Cave Story ups the ante by adding minor exploration elements to the mix. Isn't it sort of cruel and unusual to encourage players to explore every nook and cranny, only to have it blow up in their faces? The most glaring example deals with the multiple endings. There are several stipulations for getting the best possible ending, all of which players only have one chance to do properly. The very first condition comes in the form of seeing a man fall from the ceiling into a chasm. Naturally, players will want to go down and check on the man to see if he's okay. Don't do it; if you do, you've already received the worst of the two endings. I have a hard time imagining what player would completely ignore the person falling from the ceiling and move on. And yet, that's what we're supposed to do here; it's counter-intuitive.

It merits mentioning that Cave Story was originally released as freeware for the PC in 2004. The WiiWare add-ons don't offer much; the updated graphics are nice, but the original graphics weren't terrible. The new remixed music lacks the intensity of the original music, which is important for an action game. The new tracks sound like they were made with little to no regard for their context. The original graphics and music can be selected; however, the original music tracks don't loop properly. There's a boss rush mode, and an additional dungeon to be played, but the additional dungeon was available in the freeware version upon completing the game. Now, it's simply available right from the start. Lastly, players can go through Cave Story as one of the different playable characters in the game; but, there's absolutely no difference in how the game plays out, making the change purely aesthetic. In spite of all this, none of the changes or additions actually hamper the experience; they just don't do anything to improve it.

I find Cave Story to be a game well worth playing. It's a fun game in its own right, and it's also a wonderful retro experience. As a vocal dissenter of the retro gaming craze, I still admit feeling extremely happy when I see an old-school game done properly. In other words, a retro game made with the idea in mind that the old model can be improved upon, rather than viewing it like gospel, wherein any change in convention is blasphemy. It won't set the world on fire, but it undoubtedly succeeds in delivering its intended experience to gamers. I can't personally recommend the Wiiware version over the freeware version, but the choice is yours.