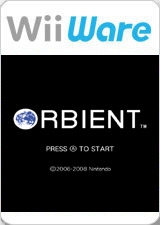 What is Art Style: Orbient? That's the question a lot of people were asking when the Nintendo-developed title hit the Wii Shop Channel this week with no advance notice of its existence. A trailer showing orbs floating around in space didn't really help explain matters. A few savvy people may have noticed the similarities to a member of a line of Game Boy Advance games, the Bit Generation titles, that never made it out of Japan, called simply Orbital. In fact, Art Style: Orbient is a remake of this GBA game, released overseas for the first time with the requisite upgrades to the visuals and the music.

The gameplay is as straightforward as could be, yet contains a hidden depth. You are an orb floating through space along with other orbs of various sizes and several obstacles such as asteroids and black holes. You use just two buttons on the Wii Remote. A to attract, B to repel. The goal is to ram into orbs that are the same size as you, absorb their mass, and then grow in size yourself. Orbs larger than you will kill you upon impact, while orbs smaller than you will not add to your size, but if you pass nearby them you can capture them as satellites of your own. Once you become large enough, the goal orb lights up. Capture this orb as a satellite to clear the stage. It's a very simple concept that can get very tricky in later stages with dozens of orbs flying around in criss-crossing orbits.

After beating each level, each satellite you've captured will give you an extra life for use in later stages. You'll use up these lives every time you crash into a larger orb or an obstacle, and you'll also get sent flying in the opposite direction. If you get sucked into a black hole, not only do you lose a life, but you have to start the stage over from the very beginning.

Your orb moves sedately throughout the stage, generally giving you plenty of time to act and react and creating a peaceful play experience. If you don't have the right arrangement of orbs around you to attract to/repel from, though, you'll find yourself flying straight into a black hole and unable to stop it. The early stages of the game are fairly easy, but from about the halfway point on the obstacles in your path will require precise timing to clear. It's a similar balance of easy main game followed by difficult extras that we've seen out of Nintendo in the past, and it works well here too. The progression through the game is fairly smooth. There's a short tutorial at the beginning to get you acclimated to the basic controls, and afterwards you'll be introduced to new concepts and obstacles gradually through the stages.

There are 30 stages spread out among six "galaxies" to start. After clearing the initial 30 levels, you'll unlock, in turn, four new galaxies of bonus stages that will require increasingly accurate manipulations of the gravity fields in order to beat them. Clearing all 50 stages will take anywhere from three to six hours. While you're scored and timed on each level, so there's some incentive to come back and try to top your score, there are no online leaderboards of any kind.

The visual and audio style give off a techno vibe, though at a slow, relaxing pace. The background music will change bit by bit and generally speed up as your orb picks up new satellites, adding to the intensity as you progress through the level. Generally speaking the overall presentation is eye-pleasing but very simple -- though for such a cheap title we're not really expecting much on the technical front. Everything performs smoothly without any noticeable glitches or framerate dips.

Overall, this is an interesting, quirky little game that only costs you 600 points ($6) for 50 levels and several hours of relaxing entertainment. It's a unique experience that exemplifies what we should be seeing from these small, downloadable titles. While it's bound to get overlooked by the general public, it's well worth your time and your points. We're looking forward to more games under the Art Style brand in the future.