A solid update of the arcade classic, but is it really worth the price of admission?

Galaga Legions was one of lesser known, and least appreciated games to come out of Xbox Live’s ‘Summer of Arcade’. A revamp of the arcade classic, Galaga Legions tasks you with destroying wave after wave of enemy spacecraft. Players of the original Galaga games will feel at home here, and although it’s nowhere near as good as the original games, the odd homage to the original here and there is very much appreciated. There are two key areas that have been worked on to bring the game up-to-date, so I’ll start off by detailing them.

The first and most obvious change is visual. The visuals are very much comparable to Geometry Wars 2. The colours are bright and neon-like. Weapons fire is equally vibrant. And the scrolling backgrounds are well varied and ‘themed’ to match the ever changing enemy craft. On top of that players can select one of 3 different ‘skins’, including one which faithfully re-creates and visually updates the traditional look. So if you don’t like the default visuals you’re at least given the option to opt for a more traditional look. The music also updates the traditional Galaga theme, which is a nice touch, but in general the music and sound effects are largely forgettable and pretty standard for an arcade shooter – neither good nor bad, just standard. 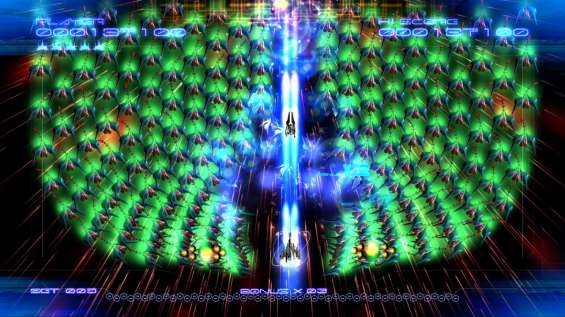 Visually the game is quite an impressive XBLA title. On top of the competent revamp and vibrant colours there’s often a lot going on at a given time – conceivably hundreds of enemies, weapons fire spraying everywhere, kill points popping up, and your defensive ‘satellites’ swirling around your spacecraft. That said, slowdown makes an appearance at times, and with so much going on it’s all too easy to get lost in all the activity.

The second key change is the introduction of satellites. You have 2 satellites and they act as secondary gun turrets, roughly equal to half your main firepower. These satellites will follow your ship and will fire upwards (constant weapons fire is default), but the best way to make use of these satellites is to detach them from your ship as you move around the screen and set them to constantly fire in one of four directions (up, down, left or right). 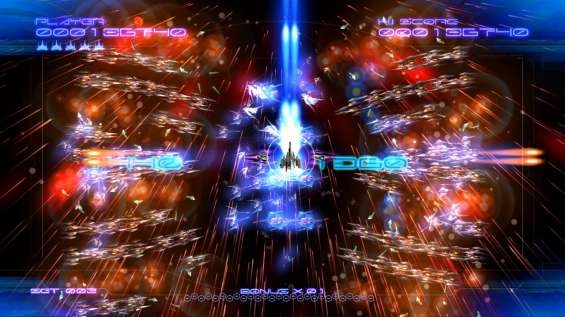 They’re only ever destroyed when your main fighter is destroyed, so deploying them strategically to catch waves of fighters coming towards your main ship is essential to advancing through the game. Before each new wave of enemies is launched at you, you’re briefly shown a rough outline of their intended trajectory, and this gives you a very short period of time in which to adjust your satellites so that they’re positioned in the most effective way possible.

On top of the satellites there are also black holes dotted throughout the game. When fired upon and destroyed they consume all of the enemy fighters on the screen, and they’re then converted into swarms of friendly fighters which swirl around your satellites, destroying any enemies they come into contact with, thereby providing you with an extra layer of defence. The level of variation in enemies is good – as each level progresses you pass through a series of 5 different phases, and you’re tasked with destroying ever changing enemies. Some will just charge at you, others will hang back and fire at you from a distance, some work in groups by defending a mini-boss who is firing at you, and so on.

There are only two modes in Galaga Legions - Championship and Adventure. Each mode contains the same 5 levels, which vary in difficulty, enemy design and visual design, but other than that the levels are all very similar. This is where the game really starts to disappoint. Both modes are essentially the same – in one mode you’re allowed to select which of the 5 levels you want to complete, whilst in the other you fight through all 5 levels in a row, one after the other. That’s the only difference. Each of the 5 levels takes between 5 and 8 minutes to complete, making for a total playtime of just 30 minutes (yes, 30 minutes!) if you’re good enough to complete the game in one sitting, and there’s no multiplayer to extend your playtime. Obviously hardly anyone is going to be good enough to beat these levels (perhaps beyond the first 2 at least) on their first play through. And it’s a tough game, so despite the assistance of auto-fire, your satellites and the black holes, you’re still going to struggle. Learning the order of the enemy fighters, their intended course, and picking the best places to position your satellites, takes a lot of trial and error, and a lot of time. So in that way the game provides enough of a challenge to extend those 30 minutes into a good few hours, but that’s only because the difficulty curve is so steep as to make the last few levels impossibly hard for the average gamer, and not because the game is chocked full of content, because it clearly isn’t.

A doubling of the number of available levels to 10 (at the very least), with a much more user-friendly difficulty curve and the creation of truly distinct game modes, would do this game wonders. As it is, I don’t think this lack of content can be justified, even for a relatively inexpensive XBLA game. With just 5 levels, no multiplayer and 2 virtually identical modes, Galaga Legions is seriously lacking in content. There’s a good challenge here, so hardcore arcade shooter fans might want to take a look at the trial (which in itself showcases 1/5 of the entire game anyway) and Galaga fans might find the revamp and some of the improvements interesting, but for the rest of us something like Geometry Wars 2 provides better value for money and a more satisfying gaming experience.