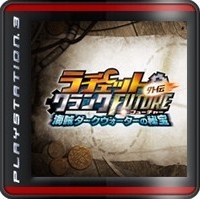 With a lot less booty than the title suggests.

In Fall 2007, the Ratchet and Clank series made its HD debut on the Playstation 3 in the form of Ratchet and Clank Future: Tools of Destruction. The game was praised for its excellent weapon based combat and strong production values. Less than a year later the surprise follow up, Quest for Booty, appeared on the Playstation Network in an attempt to bridge the gap between Tools of Destruction and the next major release in the series (currently slated for release sometime this fall). This roughly four hour romp stacks up well enough to the Ratchet legacy Sony has built on seven previous entries in the franchise.

The game picks up after Clank’s cliff-hanger disappearance at the end of the previous instalment. Ratchet and his female companion are searching for the treasure of a dead pirate which may lead to the wisecracking robot’s location. The game follows a nifty pirate theme that oddly never felt forced into the story because it plays on the hilarious side story found in ToD's adventures through space. From the opening level the game’s accessibility is apparent. The controls are tight, instinctive and perfectly complement the fusion of hop and bop platforming and third person action. Everything feels comfortably familiar, meaning little was lost in the transition from Blu Ray to PSN. The X button jumps, Square swings Ratchet’s wrench, L2 strafes, and the circle button fires your weapon. The controls are near perfect so you will hardly give them a second thought, but using the new tether in Ratchet’s wrench can be a bit touchy - for some reason this process requires you to hold down R2 and square, then pull the right analog stick to manipulate the object your facing, but only if the appropriate icon appears.

The opening level is a short romp traversing a fleet of pirate ships in the storm-battered Azorian Sea. From the get-go Ratchet has a chunk of his arsenal from the previous game with some criminal exceptions - the Groovitron is absent here, as is the super-powered Rhyno. The six weapons you do have all get the job done, but cover the more mundane spectrum of weaponry usually found in the series. The Combuster is your standard blaster, the weapon you will use the most because it's reliable and packs a fiery punch. Fusion grenades are the most powerful in your arsenal; they come in handy when overwhelmed by a cluster of enemies. The Tornado Launcher is the most interactive weapon because the tornado it produces is controlled by motion control, but it can be a bit unwieldy. Your Shock Ravager is a nifty whip but it has an ammo count which limits its usefulness. The Nanoswarmers and Predator launcher are passive weapons because they don't require aiming and don't last very long. Each weapon levels up faster in this game but the upgrades are all familiar and do little to affect the gameplay. Ratchet only has his weapons for the opening and closing acts of this story which means there is more of an emphasis on platforming and puzzle solving this time around, which is almost like breaking new ground for the brave lombax.

Gameplay hits its stride once you’ve reached Hoolefar Island. Your aim here is to fix wind turbines in order to use the island's super computer to find the ghost pirate Darkwater’s treasure. Strong platforming has never been the best bullet on the back of a Ratchet game but it is the headline this time around. Platforming is simple and clean cut - you will scale walls, jump over ledges and onto moving platforms, and avoid environmental hazards. The controversial rail grinding segments return, while often considered a deadly sin in platformers, I would be lying if I did not say these well-designed sections are at times enjoyable. The only true addition to this game is the electrical tether added to Ratchet’s signature Omniwrench 3000. This tool is used to draw platforms towards you as well as set catapults to launch the furry hero into the beautifully rendered sky. Other uses for the wrench include picking up globs of goo for illumination and firing projectiles to open blocked gateways.

Puzzles here are simple yet varied, especially in the Darkwater Cove level. Here your time is spent making music, mixing drinks, and using the electrical tether to manipulate objects so they cast the perfect shadow. The sixaxis motion controls are not used in any of the puzzling, which is a shame considering how underutilized this feature has been for the console. There are no minigames to speak of, which is another letdown considering their prominence in past entries. In all honesty though, they aren't very challenging. The puzzles are goofy and enjoyable, but as with the game in general I wish there was a bit more to them.

The enemies you encounter are basically one or two varieties of robotic pirates who are animated well but never surprise with their attacks. The epic showdowns meant to display the prowess of the weaponry reappear sparingly but are still the best part of the game. Only the final encounter could be considered a legitimate boss fight and it is decent and challenging. Quest for Booty is not a hard game; in fact it's arguably the easiest Ratchet so far, which is not surprising as the challenge level has gone down ever since the series abandoned its teen rating. There are three difficulty settings but the challenge remains essentially the same the entire game, with the only difference being that you may die a few times more when facing the more aggressive enemies.

As with all Insomniac Games developed projects, the presentation is top-notch. The story is funny (though there is an alarming lack of “booty” jokes), narrated as a story book to Captain Slag by his cunning henchman out to revive him from his watery grave. This time around the story is told through in-game assets alone, instead of FMV, which works because the game is sparklingly beautiful. I found myself smiling throughout at the smart humor found in all the right places. The visuals are amazing, being both technically proficient and artistically explosive. All of the locations present are exclusive to the title, though you will revisit them. Everything here is wonderfully animated. Ratchet's movements hold up just as well without Clank strapped on his back, which even makes them look a bit more natural. One thing that stands out about the enemies is their fantastic facial animations when they are on the tail end of a beating - their eyes bug out and their jaws become awry as you dish out mechanical genocide. It’s all powered by the same engine and assets that built the retail game, so while these are impressive for a PSN title, no new technical feats are made. The voice acting is superb and would be considered outstanding for any game, let alone a downloadable affair. The accompanying musical score, reminiscent of Pirates of the Caribbean, is standout as ear candy. The sound effects are well done and do their job. The end credits for this game are shockingly long for such a short adventure but serve as a testament to the grand production values.

Everything mentioned above is all well and good for a smaller-sized Ratchet game, but the problem is that Ratchet does not hold up when not on his disc-based format. The combat never evolves. The story has only a few twists that do not have as much of an impact as they should. It left me feeling that I would much rather play this as the opening chapters of a full-length title rather than a bite-sized episode. At $14.99 the price is fair for such a high-caliber experience, but I am knocking the value for a few reasons. While the lack of trophy support does not break the game, it would have been nice for replayability. The story is very short, and there is no reward for beating the game other than an ending that will please fans of the PS2 title 'Up Your Arsenal'. Something along the lines of a super-powered secret weapon to play with the second time around, or a complimentary arena area would have added more punch to the mix, but as it stands you will play this delightful game once and then forget about it while you wait for the next title.

There is no denying that this is a good game worth the price of admission, as the presentation and gameplay alone are top-tier among the PSN library. However, as a Ratchet game, Quest for Booty is merely a short but pleasant appetizer while we wait for the folks at Insomniac to deliver the main course sometime later this year.