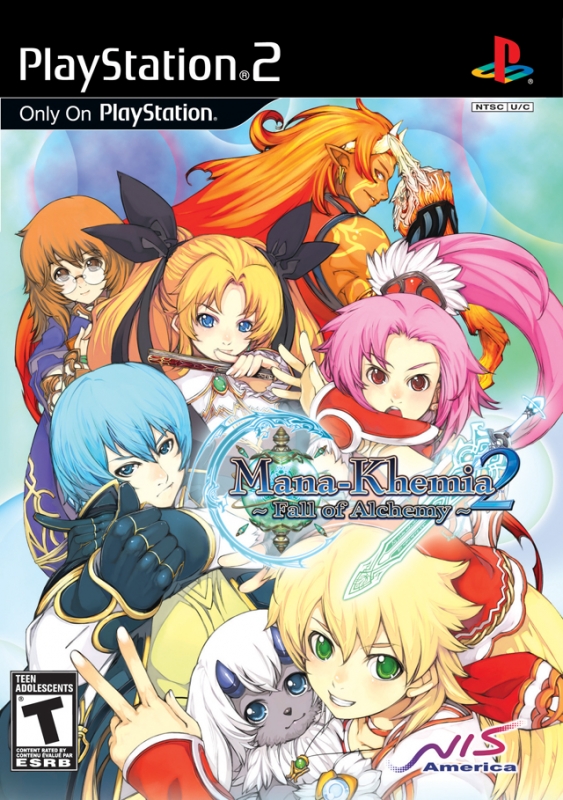 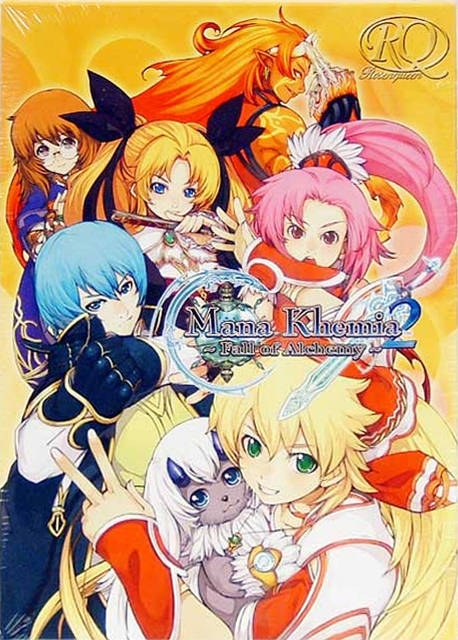 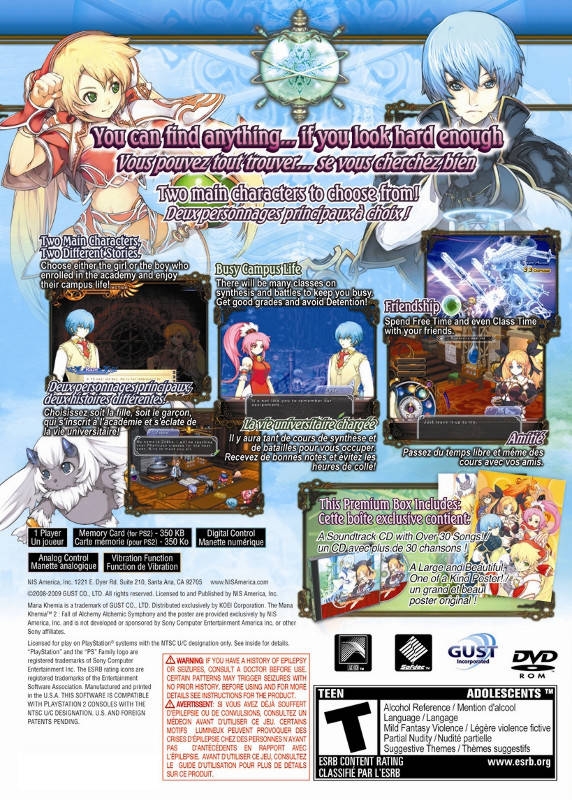 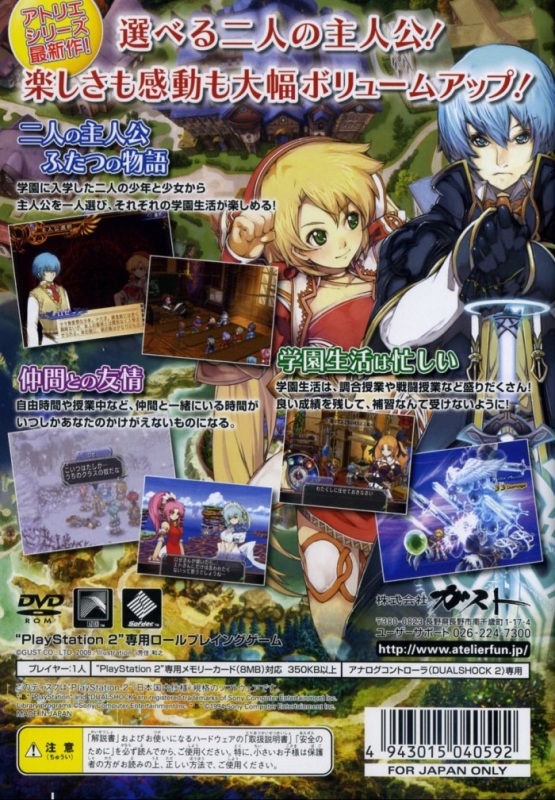 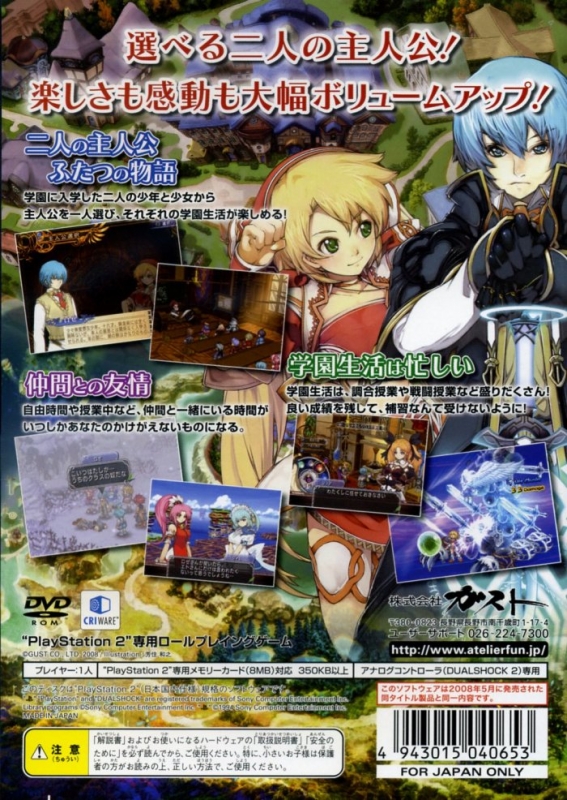 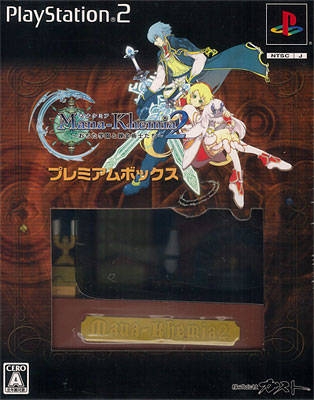 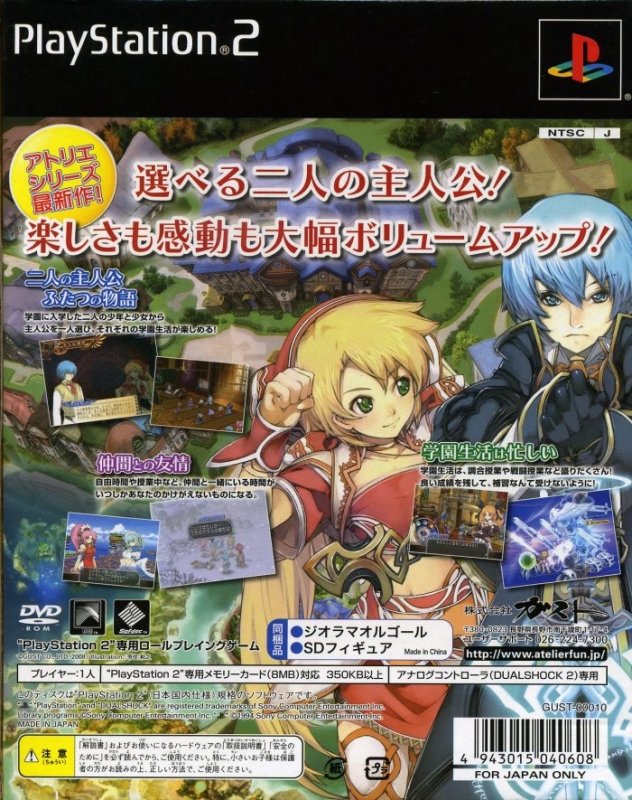 Curious what type of game Ar Tonelico 3 might be? Read on to learn about Gust's latest localized endeavor.

Gust is not your average JRPG developer. While most JRPG’s attempt to make epic stories that have you saving the world and learning important life lessons along the way Gust is much happier making cute silly little stories with just a touch of raunchy humor. The first Gust game I reviewed was Ar Tonelico 2, which was a great game except for an unfortunate localization job and extremely dated visuals that brought the title down to being average overall. Has Mana Khemia 2 faired any better?

Mana Khemia 2’s story returns to Al-Revis Academy: a school for training alchemists. Sadly, Al-Revis Academy has come upon tough times. The weakening power of Mana around the world has grounded the once soaring academy. Less Mana also means less alchemists and therefore less money for the academy. Principal Zeppel is forced to give the position of Chairwoman to one of the academy’s most significant sponsors to keep the school funded, and he is too weak willed to stop Chairwoman Marta from taking over. Marta decides that the best way to maximize profits for Al-Revis is to start teaching combat classes and eventually discontinue the Alchemy classes. Being an Al-Revis alumnus Zeppel can’t stand to see his alma mater dumping the alchemy classes that made the academy famous. He employs Gunnar, a previous acquaintance, to the position of Vice President in the hope that he will fight Zeppel’s battles for him. You come into this tumultuous situation as a newly enrolled student of Al-Revis Academy.

When you start up Mana Khemia 2 you are given a choice between two different main characters. You can either play as Raze, a combat student coming into Al-Revis, or Ulrika, a new alchemy student. Each main character comes with their own storyline as you play through a year of classes at the academy and each has a completely separate group of playable characters that you will be using in battle and learning about through the story. The two stories are not completely unique however and the two groups end up going through some of the same story events as assignments from their teachers. Both stories have the usual Gust humor, and although they were not constant laugh out loud riots there were quite a few instances of hilarious sexual humor that made me laugh and feel weirded out and uncomfortable at the same time. While the initial story about school politics sounds interesting you quickly move on to bigger things making the initial storyline feel more like a side quest than the main story. The story does stumble over itself when it tries to make a serious point, but these do not occur very often.

Since the main character is a student no matter which one you pick it makes sense that you will be spending a lot of your time taking classes. As a matter of fact, this is basically all you will be doing. Each week you pick out a class to take, and that class will task you with a certain objective that will be based on alchemy, combat, or collecting materials. When you complete the task, you are given a grade that will reward you with a certain number of stamps. The stamps are required to pass on to the next story event and if you obtain the required stamps quickly you are rewarded with a few weeks of free time during which you can take on quests to earn extra cash or play through story events for your side characters. My only real complaint with this set up is that it gives you very little chance to explore since you are always centered on the academy. You don’t get the experience of discovering new towns and traveling around the world that usually comes with a JRPG, and this will be missed by some.

Combat in Mana Khemia 2 is like your standard turn based JRPG fare with a twist. You have three of your five characters out in the battlefield and their speed determines how often they get a turn, just as the monsters’ speed determines that for them. The two characters that aren’t on the front lines sit in the back. After a certain amount of time your back line characters will be ready to switch in, and they can help out by stepping in for an extra little hit, or they can take the place of a frontline character to take a hit for them. Whenever a supporting character switches in for one on the frontlines, they will take their place until they are switched out with someone else. What makes this battle system great is that all of your characters are useful in a battle without the necessity of having all five being on screen at once. Also when you switch in a character to block a hit they will take less damage than the frontlines character would have on their own.

Since it is a JRPG obviously there have to be some flashy super moves that you can use under certain conditions and Mana Khemia 2 is no exception. The top left corner during a battle contains a Unite Meter, which goes up as you deal damage and goes down as you take damage. If you can fill up this meter, you will enter Unity mode which greatly increases the speed of your actions and allows you to do team up attacks and finishing moves both of which are flashy and do a large amount of damage. This system and the support system help to give the battles a strategic element that forces you to think ahead a few moves and decide how best to use your support characters.

One of the most inventive features of this game is how it deals with alchemy. Since the academy is a school of alchemy item creation is a big part of the game, but I was surprised just how big of a part it takes. You spend a lot of your time out collecting materials for alchemy because of one class objective or another, you will have to make your own equipment since the school store has next to nothing, and a minigame decides the quality of your creations, but alchemy serves an even more central role than this. Whenever you defeat a monster, you are rewarded with points and after a certain number the character’s maximum HP and SP will increase but you have to increase all of the other stats manually. Each time you create a new item through alchemy for the first time stat increases and/or new or upgraded abilities are unlocked in one of your characters that you can obtain using points you earned fighting monsters. This system puts alchemy in the center stage of the game because you cannot level your characters’ stats without creating new items so you will spend hours and hours creating every possible piece of equipment or consumable to unlock stat increases for your characters. It is a really cool system that makes alchemy and item creation in general far more important than any other JRPG I have played, which makes sense since it is the cornerstone of the story.

Gameplay overall is a cool twist on a turn based JRPG with a heavy focus on alchemy. I really enjoyed the battle system that gave you some strategic options with the support system and the way that alchemy is present front and center fits very well with the story and the general feel of the game. My issue with the gameplay is that you do not get a sense of exploration overall which can make things feel repetitive over time as new areas around the academy open up and you continue through your classes. I also found it annoying that you gain recipes for items before you get to the area that you have to find the materials in. It is a minor point, but it sucks coming back from the store with a new batch of recipes and not being able to use a single one because you don’t yet have access to the materials.

Unfortunately, Mana Khemia 2 suffers from the same kind of lackluster presentation as Ar Tonelico 2. The visuals feel very dated and animations are few and far between when not in battle. I really dislike that the characters would just say what they were doing without actually doing it on the screen, sure, that was the norm in the era of the original Playstation but these days it just comes off as lazy. There are also some bugs and framerate drops, but these never got bad enough to affect the gameplay. Voice acting is only used for main story events, but most of it is pretty good with the exception of a few lines here or there that feel like the actor/actress was not really trying. The music is unfortunately average. One of the best parts of the presentation for Ar Tonelico 2 was the unique music, but Mana Khemia 2 comes off sounding like your average JRPG musically.

My first play through as Ulrika took me 36 hours, after which I was treated to a less than stellar ending. I then played through as Raze with all of the items I had created with Ulrika in 27 hours and then played the extra portion for the true ending in 4 hours so all told I played Mana Khemia 2 for 67 hours. If you play only one time through you really do not get a good ending and it feels like very little is resolved. The game then prompts you to start again as the other character and gives you a choice to keep all your items or not. Raze and Ulrika go through a lot of the same story events from different sides so the second play through can feel rather repetitive. You are treated to new side stories for new side characters and more jobs to keep you busy which helps keep the second playthrough from feeling like exactly the same experience. The true ending is good for closure and allows you to pick and choose characters to use from the two groups, but it did not have any voice acting until the very end so it felt like an afterthought.

Mana Khemia 2 is an interesting JRPG that avoids being normal as much as possible. The battle system is a different take on turn based systems, the focus on alchemy is very well done, and you can get a lot of hours out of the game if you so care to. But the presentation is poor in almost every regard and your playthrough with the second character will not be as interesting from a story standpoint as your first. I would suggest that fans of JRPG’s or Gust in particular pick this one up and you will not be disappointed, but it really only comes out to being a slightly better than average JRPG experience.