A likeness to the past.

After five-plus years on the market, the Switch has accumulated a significant number of Zelda-like games. These include Nintendo's official offerings, Breath of the Wild and Link's Awakening, plus ports of seventh-gen games like Darksiders, and more than a few independent titles forged in the Zelda mold. The latest indie Zelda-like game to grace the Switch is Airoheart, a love letter of sorts to that most famous of top-down Zelda games, A Link to the Past. Inviting comparisons to one of the greatest games in video game history is a bold move, no doubt. Read on to see how Airoheart measures up.

In your very first minutes with Airoheart, the similarities to A Link to the Past reveal themselves. Visually, the game maintains an uncanny resemblance to the Super Nintendo classic, with models, assets, and animations that look nearly identical to those from 1992. There are plenty of unique items, monsters, NPCs, and biomes in Airoheart, no doubt, but most of the time it feels more like a mod of A Link to the Past and less like something built from scratch. Other indie titles like Blossom Tales II and Ocean's Heart have managed to evoke the visual spirit of Zelda without copying it wholesale, so it's a little disappointing Airoheart couldn't do the same. 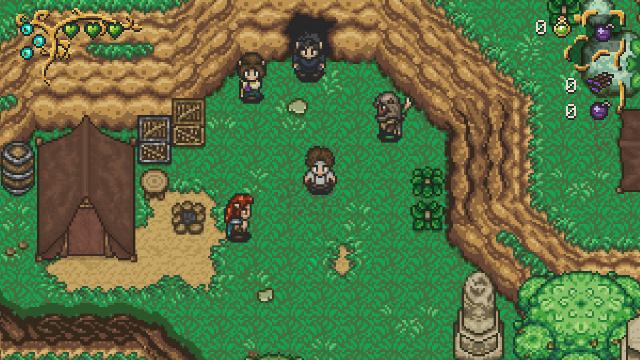 Graphics and assets aren't the only things that conjure comparisons to A Link to the Past. The top-down action-adventure gameplay in Airoheart is very similar to the seminal SNES game, albeit with some engaging wrinkles all of its own. As the young adventurer Airoheart, you'll explore the lands of Engard, looking for pieces of a powerful stone in several dungeons populated with monsters, treasures, keys, and boss creatures. You'll also move around a large overworld filled with towns, forests, deserts, garrisons, dungeons, and plenty of quirky, quest-giving NPCs.

Dungeons in Airoheart are a mixed bag. Some are simply better than others. Several early strongholds are a bit long and disorienting, with excessive backtracking. The lack of a dungeon map really hurts here, especially because there are few short-cuts and several one-way routes. Things improve around dungeons five and six, before hitting a frustrating point in the ninth and final dungeon. There is one unforgiving stretch here that will push you to your limit. Essentially you need to move a powder keg across a narrow path of slippery ice, with bottomless pits around you and spiky discs ricocheting off the walls. Thankfully, this difficulty spike is one of a kind; in general, the puzzles and bosses in each enemy keep are tough but fair. Boss battles, overall, are quite good, if a little clunky. 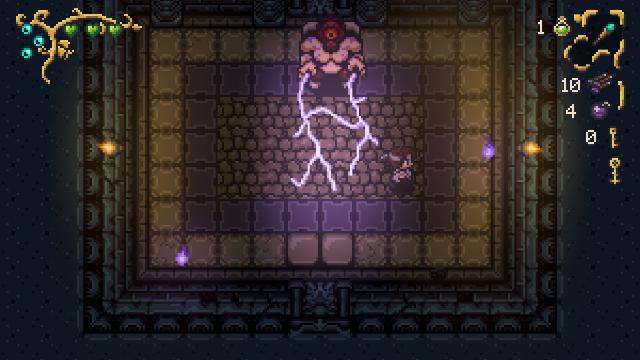 The game's overworld, and the secrets and NPCs that dwell inside it, fare far better. Airoheart performs its best when the titular hero is running errands for the colorful denizens of Engard, unraveling a riddle, or venturing off the beaten path to find a cave, mini-game, or mystery. You'll have to win a footrace against a speedy faun, choose wisely in a shell game, cure a bewitched rat, and track down an escaped convict, among many others. It makes for a fun, rewarding time. What's more, rookie developer Pixel Heart Studio added to the pause menu a super helpful log of all accepted/completed quests. This is a welcome quality-of-life bonus that should come standard with all Zelda-ish games.

What adds to the fun and intrigue of overworld exploration is a healthy dose of opaqueness. When it comes to signposts, hints, and directions, Airoheart actually leans more toward the enigmatic The Legend of Zelda (NES) than A Link to the Past. The perfect representation of this air of intrigue arrives toward the end of the game, when a friendly wizard tasks you with uniting the five broken pieces of a legendary sword, but doesn't bother telling you where to look. You'll have to piece together clues, talk to strangers, and do a fair bit of random wandering to sort it all out. This can backfire, of course, when things get a little too abstruse, but in general the lack of hand-holding works well for this game. 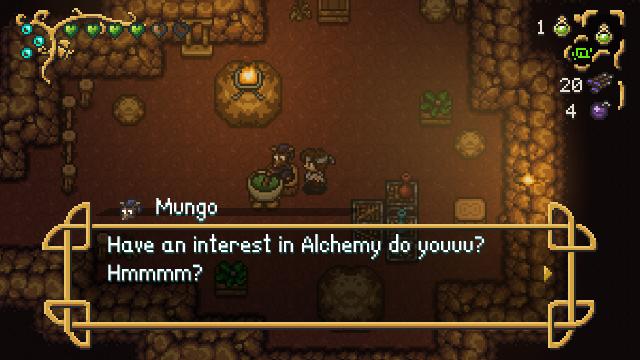 Thanks to all these ancillary quests and random exploration, in addition to the main campaign, Airoheart is a meaty title. It will take approximately 20 hours to complete the adventure, with most side content completed, and probably several more to see everything Engard has to offer. The asking price of $40 seems steep compared to other recently-released independent Zelda-like games, but it's ultimately up to the consumer to make that decision.

In the same way the general gameplay loop of Airoheart mirrors Zelda, its mechanics emulate the legendary action-adventure franchise, with one major novelty. At Airoheart's disposal are the typical weapons and instruments: sword, shield, bow, bomb, etc. There are also magic shoelaces that perform like Roc's feather from Link's Awakening. One area where the game cleverly diverges from the Zelda template is through mana stones. Along his journey, Airoheart will find several stones — some mandatory, others optional — that he can use in conjunction with a magic wand. Based on the stone, he can heal himself, throw a fireball, create a shield around himself, or latch on to far-away nodes. It's one of the more unique elements of Airoheart, and also one of the best, thanks to the flexibility it allows.

Despite these dependable, interesting mechanics, combat in Airoheart can be aggravating at times, especially in the early hours. Monsters hit hard and attack in bunches, often bouncing you around like a pinball and rapidly depleting your health before you know what hit you. Thankfully, as you gain more hearts and health potions, and upgrade your shield and armor, the frustration is diminished. 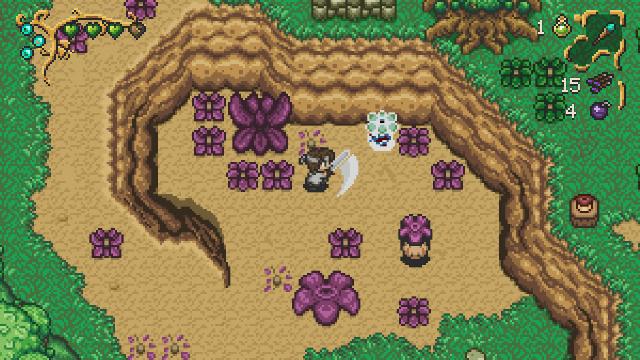 While Airoheart emulates the visual landscape, mechanics, and gameplay flow A Link to the Past, its story is decidedly more serious — almost RPG-like. It involves a conflict between elven-like Elmer, masters of defensive, peaceful magic, and human-like Breton, practitioners of offensive, destructive magic. Airoheart, half Elmer and half Breton, finds himself smack in the middle of an escalating conflict, spearheaded on the Breton side by his estranged brother. All the while a disembodied voice directs him to collect the long-lost pieces of the Draoidhe stone. It all makes for an engaging narrative with political and racial elements that go beyond the standard Zelda fare.

The story also operates in an unusually gray area, in terms of morality. In Fengrileye Forest, you might run into a hermit who criticizes you for destroying personal property and woodland creatures. Toward the end of the adventure, an NPC will confront you over the number of monsters you've slain. And, throughout your quest, several characters will perish in unfair, painful ways.

In terms of performance, Airoheart is mostly reliable. I ran into one soft lock situation in the second dungeon, but that bug has been fixed in a day one patch, according to publisher Soedesco. In general, Soedesco has been proactive in identifying and solving any technical hiccups, which is a good sign for the game moving forward. I also experienced four crashes, but thanks to the game's generous auto-save functionality, I never lost anything important. Finally, I ran into an odd situation on Mount Comito where I couldn't exit a cave opening. Only by swinging my sword was I able to propel myself through. 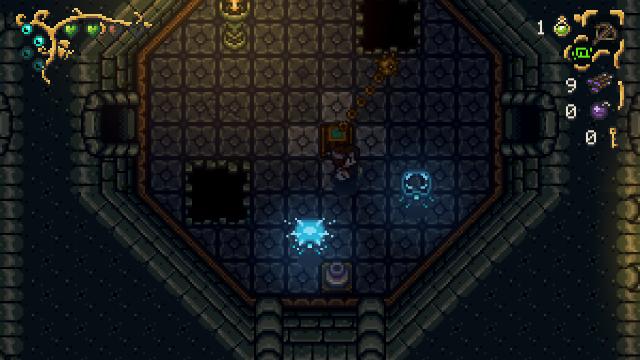 Graphically, Airoheart is fine, if unoriginal. Because so many assets and animations bring to mind A Link to the Past, there's a sense of déjà vu throughout that detracts from the experience. The musical score performs a bit better, but it suffers from limited tunes repeated several times over. The most egregious audio item, though, is the bizarre over-use of a violently loud sound effect that plays during explosions, enemy contact with Airoheart, or when a door opens and closes. It sounds almost like a gunshot, or a car backfiring. Why this jarring effect was chosen and then deployed in so many common situations is the great mystery of Airoheart.

In the end, Airoheart can't compare to A Link to the Past, despite the visual similarities. Even so, it's a perfectly decent take on the Zelda formula, thanks to an overworld populated with engaging side-quests and secrets, an interesting and flexible mana system, and a surprisingly nuanced narrative unafraid to get heavy. Some unforced errors and a lack of polish keep it from reaching its full potential, but top-down Zelda fans will find a lot to like, especially if they can move past the shaky early hours.

This review is based on a digital copy of Airoheart for the NS, provided by the publisher.