A Memoir Blue’s aspirations as an interactive poem feel undone by shallow execution.

Exploring one's past has been a staple of sentimental indie darlings for ages now.  A multitude of examples have shown us the potential of transplanting such emotions, be it heavy or light-hearted, into game mechanics.  Now, freshman developer Cloisters Interactive (helmed by Shelley Chen) dares to wade into this overfilled pool with a self-described "interactive poem."  Although A Memoir Blue’s intentions are noble, this metaphorical tale rarely test the waters of its interactive or thematic potential.

While being bombarded by photographers for her successful swimming finish, a timorous Miriam scans the crowd looking for someone she seemingly can’t find.  After this prologue, she returns to her apartment and begins to nod off.  Once her trusty old radio "magically" plays a sad song, her flat becomes filled with water.  The magical-realist journey through her past now begins. 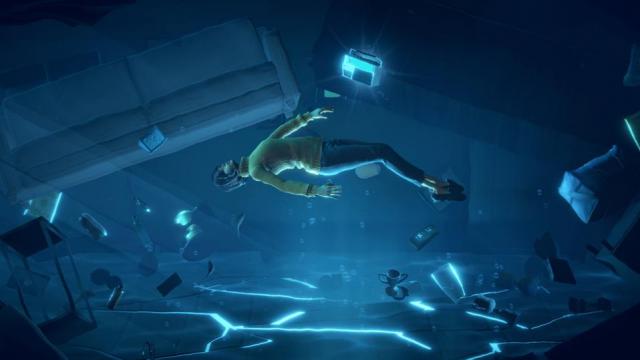 From beginning to end, Blue's dialogue-less story is a series of vignettes that coordinate with gameplay in minimized ways.  Miriam’s egress from the apartment begins showing her memories through 2D animated shorts while she still inhabits a 3D world.  While the real Miriam is aboard a subterranean train ripping down a series of stacked posters and articles, successive snippets of Miriam and her mom leaving her abusive dad play out across each page.  As the train comes to a metaphorical stop, she moves onto the next fantastical locale to continue reminiscing on their new life together – the good and the bad.

Given Miriam's despondent reaction during the prologue, you can tell where this eventually leads.  The breezier moments of freedom between the two shifts to a growing distance as her mom's work gets in the way.  As that sense of loneliness settles in, the various settings feel more distant and unwelcoming too.  Her one constant sense of belonging, communicated through the 3D world and 2D cartoons, is the pool. 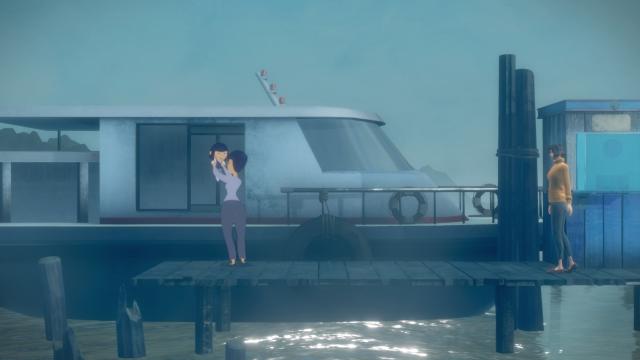 When purely focused on the concept, I can get behind Cloisters' intentions.  Designing memories not just as old-timey slideshows but also moments of physically manipulating the environment is a neat idea.  Whether it's the previously-mentioned sensation of ripping off several posters, tearing seaweed out of clogged gears, or smoothing out an image with a roller, those tactile moments lend a little extra texture to the story.  There's no pretense of you doing more than the bare minimum, but some moments successfully mix your limited input with the lovingly-detailed 2D storyboards.

The issues with this structure are twofold: mechanical and thematic.  The former complaint stems from my innate aversion to mapping in-game cursors to the control stick.  Sure, the triggers (RT & LT) act as a 'fast select' option, but that also strips player agency when scanning the environment.  This is one of those nitpicky annoyances that isn't an issue with mouse and keyboard.  A more universal issue however is how barebones these quasi-puzzles always are.

The thematic critique of a mechanic's purpose isn't as consistently annoying, but problematic nonetheless.  Hell, the first scene relies on you just button-mashing to progress, and I'm still unsure what that's actually communicating.  That nebulousness extends to several other shoe-horned mechanics too; there's a drive to latch onto any mildly-interactive concept because there naturally has to be some kind of speedbump before the next cutscene. 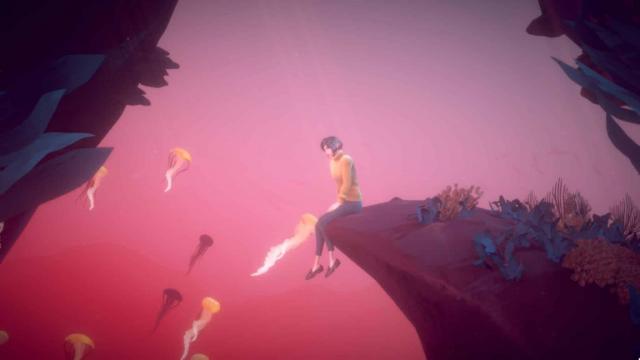 While assessing the dollar-per-hour value has its place (especially at $8), Blue's ephemeral one hour runtime also hurts itself creatively.  The wonderfully-animated 3D and 2D worlds and Joel Corelitz's soothing soundtrack create a few poignant moments, but the time spent with them feels like you’re only treated to the appetizer.  Likewise, there isn't any room to breathe in this hurried tale.  Any of the uglier angles of the mother/daughter fallout have been methodically sanded away.  I'm sure that creative choice has earnest intentions, but it blunts the finale's impact as a result.

If nothing else, Cloisters Interactive leverages its pleasant aesthetic and soundtrack in some interesting ways.  The problem is the experience surrounding them is metaphorically gasping for air.  The minimal gameplay in this interactive poem oftentimes feels inserted without rhyme or reason.  And though the condensed narrative has some visually evocative moments, the ebbs and flows feel too safe and predictable.  When it’s said and done, A Memoir Blue's earnest aspirations feel undone by shallow execution.

This review is based on a digital copy of A Memoir Blue for the XS, provided by the publisher.