Incorporating music into gameplay has been one of gaming's biggest fascinations.  Whether examining more obvious examples like Guitar Hero and Rock Band or subtler inspirations like the origins of Batman Arkham’s Freeflow combat system, certain templates of game design lend themselves to this by harnessing rhythm.  Established by cousins Daim Dziauddin (Street Fighter V concept artist) and Wan Hazmer (Final Fantasy XV lead designer), Malaysian independent studio Metronomik considered how an exotic soundscape could be incorporated into action-adventure gameplay.  I was immediately onboard with the idea.  The final result in No Straight Roads, however, is like attending a grand concert with half the performers playing out of tune.

The setting is Vinyl City, illustrious metropolis and music capital of the world.  No Straight Roads (NSR) is effectively a monopoly in the city, as it manages the city's power through music.  Think Monsters Inc.'s scream-energy concept but replace it with EDM (Electronic Dance Music) by Vinyl's most talented artists.  This structure enables NSR to entertain auditions for the artists it deems can maintain standards of order.  Upon failing to meet NSR's requirements with rock music, Bunk Bed Junction (the band comprised of our protagonists Mayday and Zuke) set out to challenge NSR's music-authoritarian rule. 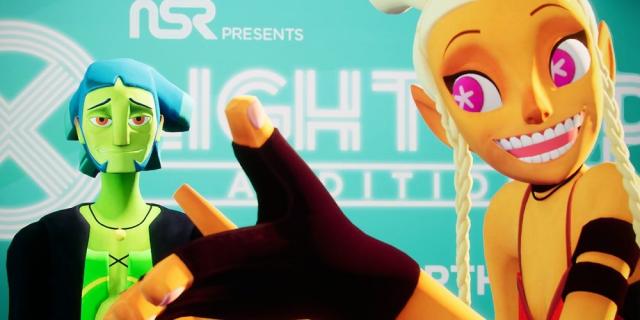 How do they plan on sticking it to The Man?  Well, by bashing their guitar or drumsticks against NSR robot-minions and bosses within a 3rd-person action-platformer template.  I've always had a soft spot for these conceits too.  The roguelike Crypt of the Necrodancer relegates your hops to each tile and your attack swings in sync with the beat.  The issue?  No Straight Roads doesn't commit to this outside of parries and movement coordination during most boss fights.  The rest of the time it's like you and the surrounding world are playing different songs.

Although the foundation is inherently a boss rush, there are preliminary security stages to fight through.  Here ranged and melee minions will maintain their choreographed moves until you destroy them.  Melee robots make a seismic ground pound to jump over, whereas legged cameras (ranged) have projectiles to dodge.  It's all very... uncreative, once you know the routine.  Sure, platforms and enemies reacting to a tempo looks neat at first, but your attacks are just freeform like any other 3rd person action game.

Combat also fails on visual and mechanical satisfaction.  Mayday being the guitarist means she's the heavy hitter while Zuke and his drumsticks are for quick, light combo hits.  The little things like finicky hit detection, a lacking sense of punch against enemies, and jankiness makes this enterprise feel stale on a sensory level.  Transplant those issues into 6-8 challenge rooms before reaching the boss and the repetition begins to quickly seep in.  Even the pleasing look of musical notes used as projectiles bears no mechanical satisfaction; a generous auto-lock is given for picking off flying enemies.  There are some environmental assists you can trigger, but all it requires is holding Y button within proximity to fill up a specific meter. 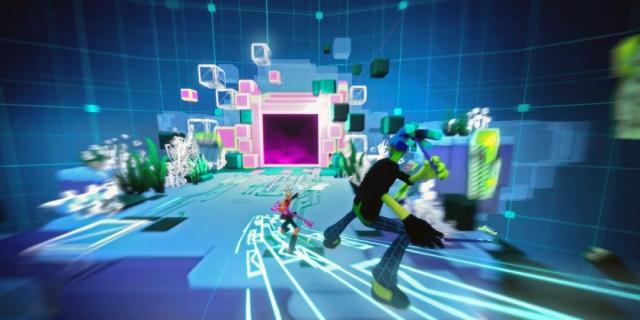 The lack of dynamism partially extends to exploration as well.  Without question, Vinyl City is a gorgeous backdrop.  And as you defeat bosses and collect their city keys - in the form of platinum records - the unique personality practically drips from each new avenue, impelling you to move forward.  Despite some obnoxious invisible walls, unlocking double jump & dash does make the hunt for batteries (known as 'qwasas') engaging enough.  The problem stems from how limited the effects ultimately feel.  Hitting the qwasa threshold to restore a streetlight or a vending machine does help illuminate the city and nets you social currency, but it's so limited as to feel like a vapid afterthought.  Repetition began to bite when realizing the world's characters are mostly static and reaching the next boss’ haven will take longer and longer to reach every time.

For all the design qualms with Metronomik's expansive cityscape, they succeeded in the intimate seclusion of Bunk Bed Junction's hideout.  There's a modest panoply of systems & ideas that make it feel like home: underground rock shows, mod station for weapons, radio program, briefing room, and a playable arcade cabinet.  If you perform well against bosses and restore the city you'll acquire more currency in the form of fans.  The higher you climb, the more passive stat boosts you can apply to Mayday & Zuke, individually and as a group.  I also thought the radio talk show was a great touch to learn more about these two; how they handle conflicts, past mistakes, and frustrations with NSR.  It concisely sells the rock revolution Mayday and Zuke are striving to achieve via game systems.

As hinted at previously, the boss battles are combat's mainstay.  The cacophony of visual & aural maximalist concepts feel so wild and inventive, final boss notwithstanding.  From electronic-disco on The Milky Way to Psydub in an abstract art museum, the wild avenues you chart can't help but leave an impression.  I'm willing to bet cash anyone will casually groove to the beat while fighting these bosses.  You can tell it's where the most mechanical work went in as well.  Musically-timed parries, sensible reason for auto-firing music notes, environmental tools, and so on feel more harmonious during these stages.  That said, I do take special issue with Sayu (2nd boss) in regards to cheap attacks that are consecutively vomited at you.  I wouldn't mind the lack of boss-stage checkpoints were it not for that one 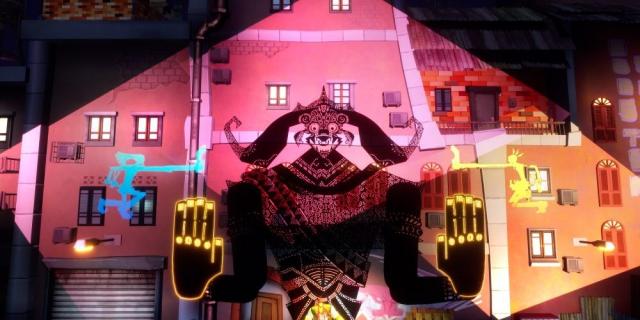 To compress this wall of sound: No Straight Road's gameplay is its weakest aspect.  Even ancillary complaints like wrestling with a fixed camera during combat or the general uselessness of your biggest AoE attack add on to the frustration.  You could easily see someone shredding on this guitar if half of the strings didn’t snap.

By contrast, the art style and soundtrack are its greatest compliments.  Think Double Fine's quasi-trademarked visual design drawn by someone going through a sugar rush and listening to their favorite anime soundtrack.  The colors don't pop so much as they blossom.  After reaching the end-game, walking down all the districts to see the architecture change from futurism to classical sells you on the intricate web of each bosses' aesthetic & genre inspirations.  The way boss fights are fantastically framed with respect to monumental size, vivid colors, and movement can't help but swell your senses.  Even the... weirder decisions with respect to character models and occasionally distracting visual overload don’t dent my overall admiration.

Even though sound design, particularly in combat, doesn't capture the oomph! you'd expect, it's all about the soundtrack.  I’m impartial to a few of these genres and I still came away impressed.  Whether it's chiefly thanks to the multiple composers or bands brought in, whoever put in the effort in this filtering process deserves a huge raise.  They're the type of dedicated people capable of finding a Christian Rap album you might enjoy; a formidable power indeed.  In case it wasn't clear enough: No Straight Roads deserves a best soundtrack nomination. 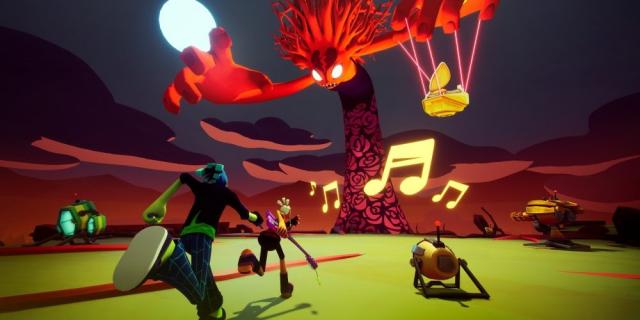 Another major consideration would be the oddball story, which suffers a peculiar dilemma.  The plot synopsis has cut-n-dry comparisons to make about monopolies or even single-party ruling systems.  The allegorical messages aren't me inserting something out of nowhere; the beginning sets up this clash in clear terms.  What's interesting is the uncaring attitude about that by every boss except the final one.  Instead, your encounters with them are about something more personal.  These fights are almost like vignettes about a relatable dilemma, and I genuinely liked some of them.  Then the final act comes along and issues of Rock's "chaos" versus EDM's "order" get played up in this rushed manner.  "Oh, by the way: authoritarianism is bad, man!"  Yeah, yeah, we get it.

The story is also harmed by its presentation.  Although I'm not outright against the spunky punk-rock girl trope, and she has some charming moments, Mayday is not easy to get along with.  Su Ling Chan seems to be desperately fighting back an accent with every other sentence.  And while I did enjoy most of the eclectic cast, the easily-expected "surprises" and resolutions are delivered in a stilted manner.  It's an uneven, haphazardly-directed story with enough heart for me to savor the good and plow through the bad.

Value is a strange proposition depending on your expectations.  It's a deluxe indie game priced at $40 and it took me about 6 hours to complete.  Outside of that, there are modest amounts of extras to consider, such as extra difficulty modes against bosses and couch co-op.  Just as I had previously detailed in my Battletoads review, I've been unable to assess that mode with a friend due to my COVID-19 contagious risk.  For those who are still tempted: I'd suggest holding off until a big patch releases too.  Bugs ranging from looped stages against the final boss, some unpolished cutscenes, and other oddities had a habit of cropping up. 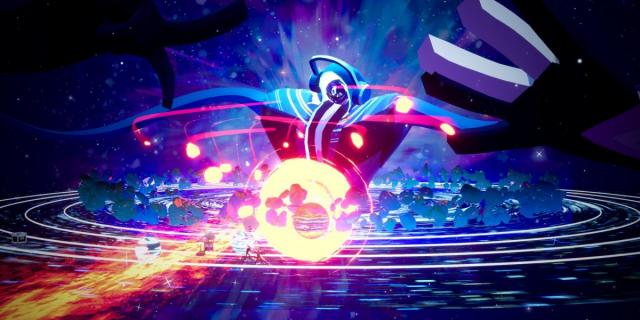 It's a touch ironic that a dedicated rock band like Bunk Bed Junction never go to 11 during their on-stage performance.  No Straight Roads is a heartfelt lyric in search of a good tune.  The rhythm-action gameplay feels so lost & mismanaged that you'll only sporadically feel the auditory-tactile synesthesia that you would in Thumper or Guitar Hero.  The battle of the bands concept and the unique world have an indiscernible energy that unequivocally succeeds in its presentation, but not its story or mechanics.  I hate throwing so many tomatoes at this band but hopefully Metronomik's sophomore album harnesses their true potential.