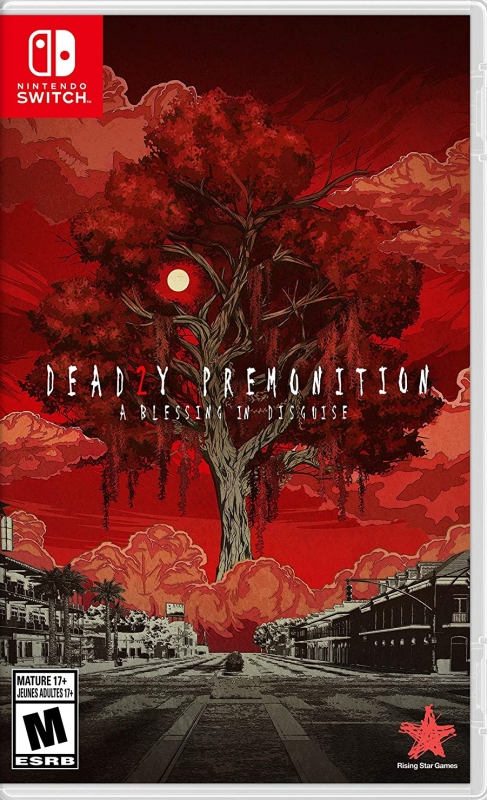 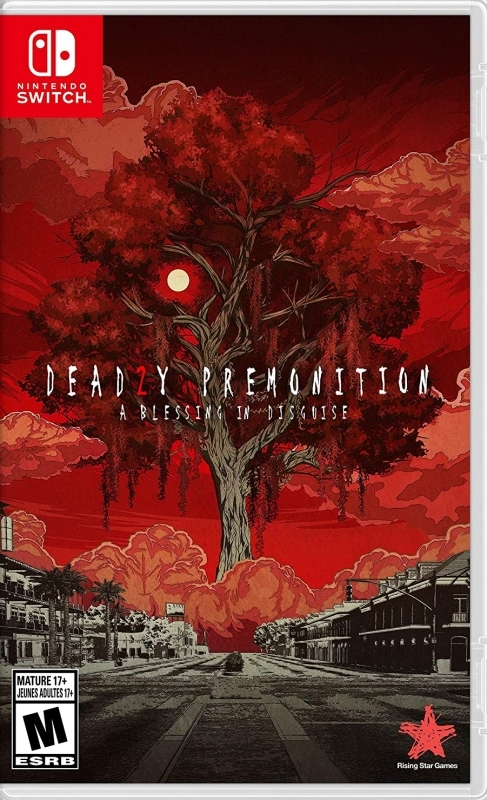 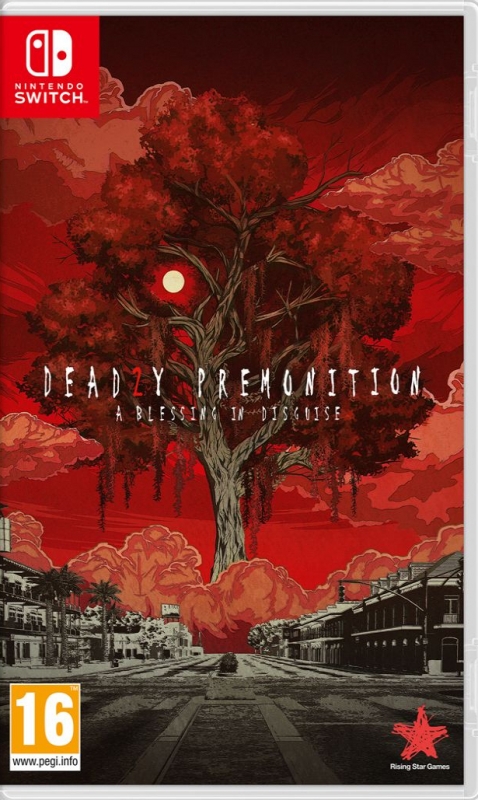 It’s becoming increasingly rare to find an almost entirely unique concept in video games, and even rarer to have it financially successful enough to be worth a sequel. In that respect, Deadly Premonition 2: A Blessing in Disguise may be an inherent success story in and of itself. The original was an absolutely bizarre experience that could perhaps best be described as a murder mystery story with a suite of mostly unrelated and very unpolished gameplay elements tossed in alongside it. And yet, despite all of its failings, there was an undeniable charm about the first game. Ten years later, the series finally gets a continuation. Is that same sense of earnest charm enough to overcome many of the title’s technical deficiencies and lackluster gameplay designs once more? 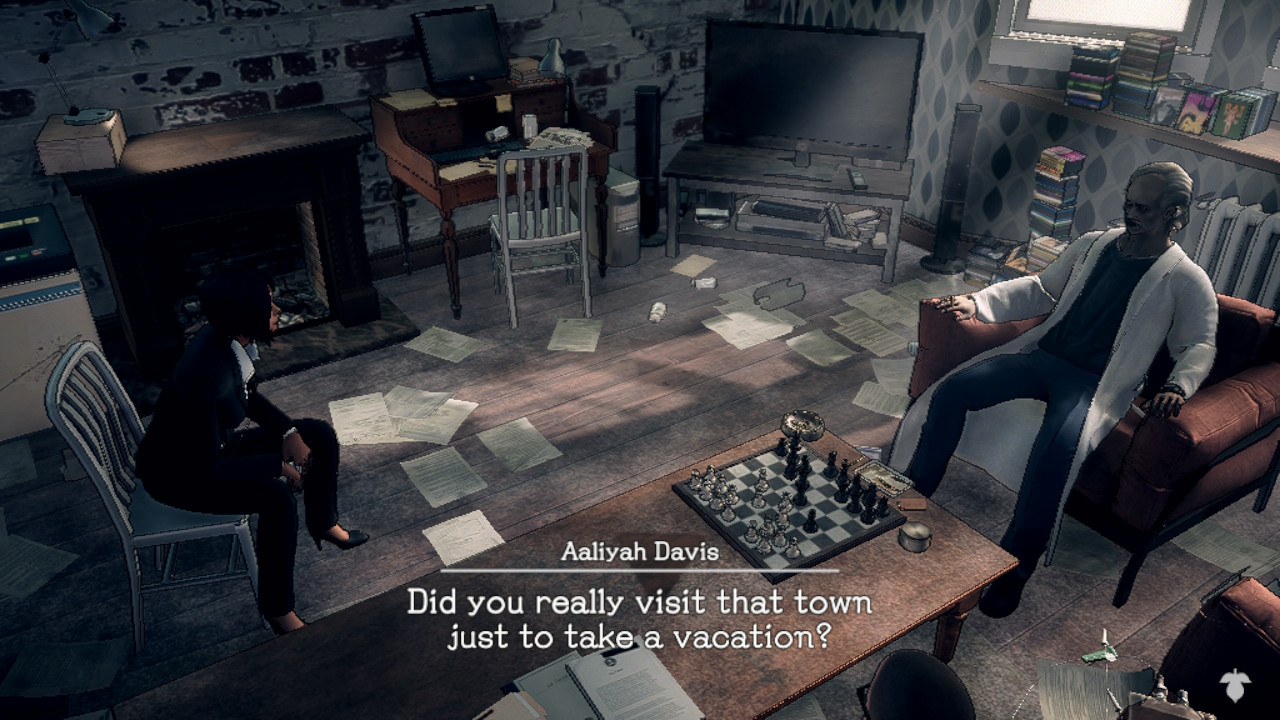 Right off the bat, Deadly Premonition 2 flaunts convention again by placing us nine years after the first title playing as a new detective named Aaliyah Davis and interviewing previous game's protagonist Francis Morgan. Morgan, who is now much older and sporting a forehead the size of a roadside billboard, has had his unique investigative style come under question, and Davis suspects him of not only failing to nab the right people in an older case, but being corrupt as well. For the most part, however, this is only a narrative setup, as the vast majority of the game takes place as a flashback Morgan is having to that older case. Morgan, or “York,” as he prefers to be called, vacationed to the fictional Louisiana town of Le Carre, and ran into a series of cult-ish killings based around an old ritual. Most of your playtime is spent controlling York in the past and working to solve these killings, occasionally popping back to the present for Davis to ask some more questions that connect some of the overarching themes. 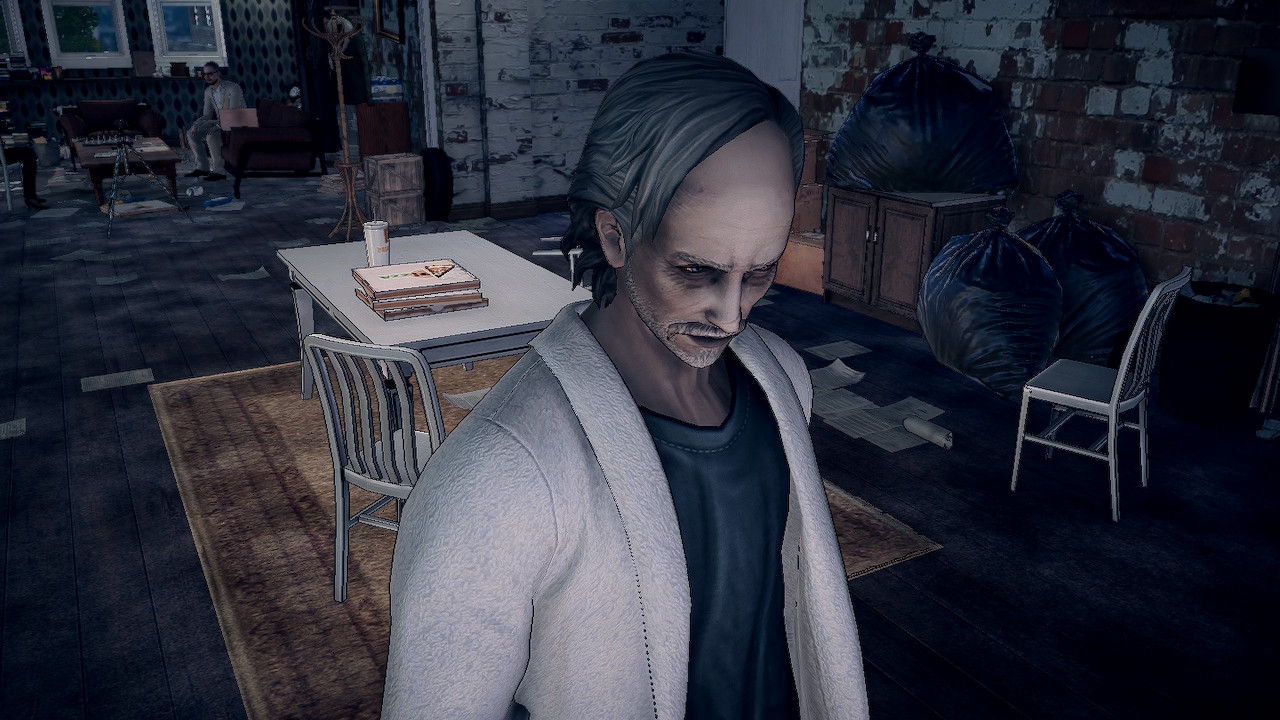 Despite possessing the attention span of a child on two liters of soda, York is somehow the most capable individual in the entire town of La Carre by a longshot, and so pretty much all of the clue gathering, witness interviewing, and deduction has to be done by York personally. Like the first game, the selling point of Deadly Premonition 2 is how wacky its story is. York still employs the most bizarre method of detective work possible, beginning with consulting a talking painting in a hotel for hints and only getting stranger from there. His journey around La Carre leads him to slowly uncover a longstanding plot that is influential not just to the past but the present day as well.

For what it’s worth, York is still an entertaining character. There aren't many detective protagonists in video games that constantly spout pop culture references to random passers-by and use a skateboard as their primary means of transportation. This time around York is saddled with a teenage girl named Patricia, who is likely meant to serve as the straight woman to York’s bizarre series of antics, but in reality just winds up being the slightly less ridiculous character to contrast with the person who in any sane world would have been sectioned in a mental hospital. One way in which the game tries to endear York to the player outside of cutscenes is by having him spout random lines as he skateboards through La Carre. Unfortunately, the developers couldn’t be bothered to give him more than like four lines per story chapter, and so traveling with him around town becomes exceptionally irritating very quickly. I wound up primarily using the unlockable Uber service as a means of travel less for convenience and more so I didn’t have to listen to York repeat the same lines about New Orleans’ street quality for the 50th time that day. 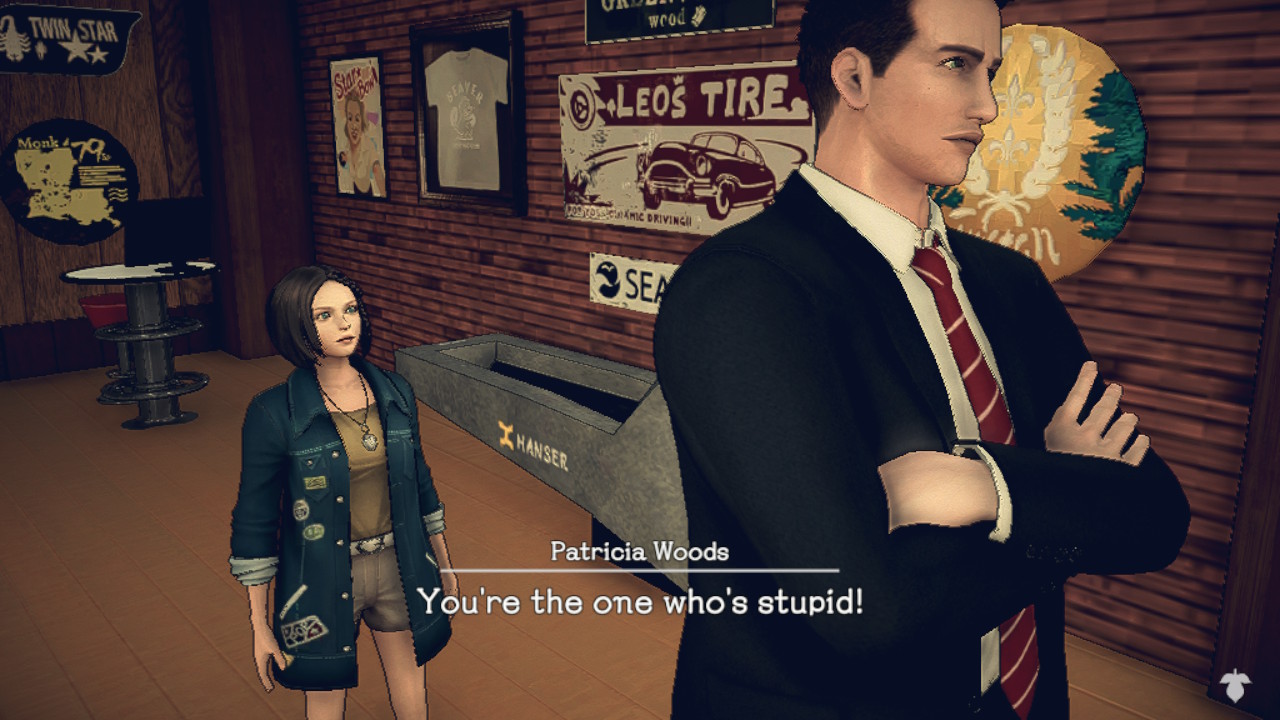 Unfortunately, once you get past the quirky design and odd characters, things start to fall apart quickly. The game is filled with bugs, the framerate frequently dips below 20 fps once you step out of a building and start moving around the “open world,” and characters will sometimes just freeze in place. The draw distance is awful, with textures and occasionally entire characters loading in mere feet away from the player. The animation is horrendous as well: characters’ lines and tone of voice often don’t line up with the way their lips move and the expressions they make. It’s not uncommon to see someone screaming at the top of their lungs while maintaining a thousand yard stare and having their lips flap up and down like a motorized fish on a wall. Loading times are long enough to rival pre-patch Bloodborne, and occasionally the game will just fail to load its contextual prompts and soft lock, forcing you to restart. Even by the standards of the original title, there are some serious technical problems on display that hamper the experience.

And on those rare instances when the game does manage to pull it all together and actually runs halfway decently, the gameplay is still incredibly shallow. Like the first Deadly Premonition, the core gameplay largely consists of walking around and talking to characters for information, occasionally broken up with some clunkily handled minigames and third person shooting segments. Movement feels stiff and clunky, the combat has no depth whatsoever, and the “deductive” sections are an absolute joke, with no penalty or stakes for incorrect answers. Similar to its predecessor, Deadly Premonition 2 is an exceptionally lazy game, and it seems the only effort was put into making a wacky world with equally wacky characters to talk to. 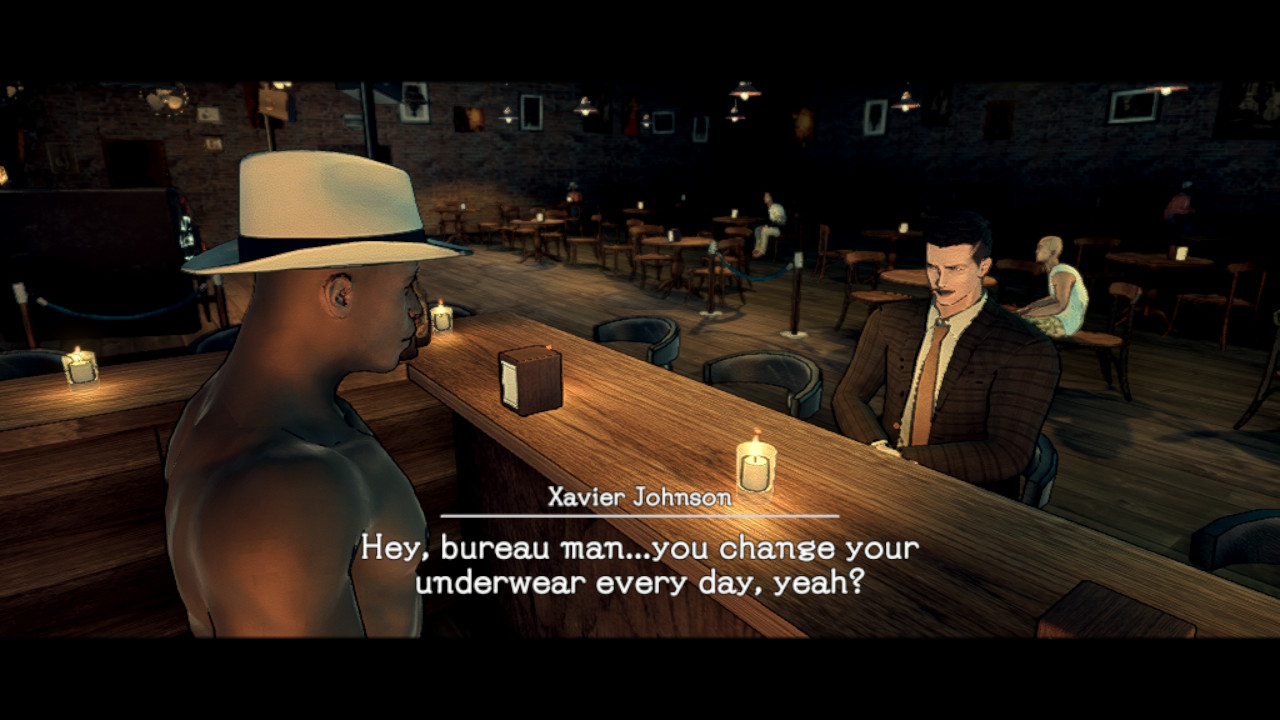 That entertainment factor might be enough to carry a game if the world were interesting to walk around and explore, but Le Carre is utterly barren and devoid of detail, even more so than the previous title’s setting of Greenvale. The city is structured somewhat similarly to the first game, with buildings that house people you can talk to as well as the odd minigame, and then a free roamy “open world” connecting those buildings. And while the various shops, churches, and stations have some interesting content, the town itself is essentially lifeless outside of those building interiors. No cars on the road, pedestrians are fairly scarce, and virtually nothing interesting artistically; just bland, samey buildings as far as the terrible draw distance can render. It’s honestly astounding that the framerate manages to chug as much as it does given how barren the world is; the game must be running on an engine built on discarded cereal boxes.

After playing Deadly Premonition 2 through the first act, I was sure it was going to be one of my least favorite games ever. For what it’s worth, though, like the first game it still eventually managed to get me invested in its world and plot. The gameplay is thoroughly mediocre at best, and the characters all act as if they were written by aliens who have never interacted with any actual humans, but to his credit, Hidetaka “Swery” Suehiro still has a knack for making compelling and memorable games if for no other reason than how bizarre and unique they are. And maybe that is worth praising in and of itself, especially in a medium where titles often struggle to differentiate themselves. In many ways, it’s unique and refreshing to play through something with such blatant disregard for so many of the conventional “rules” for video game design. 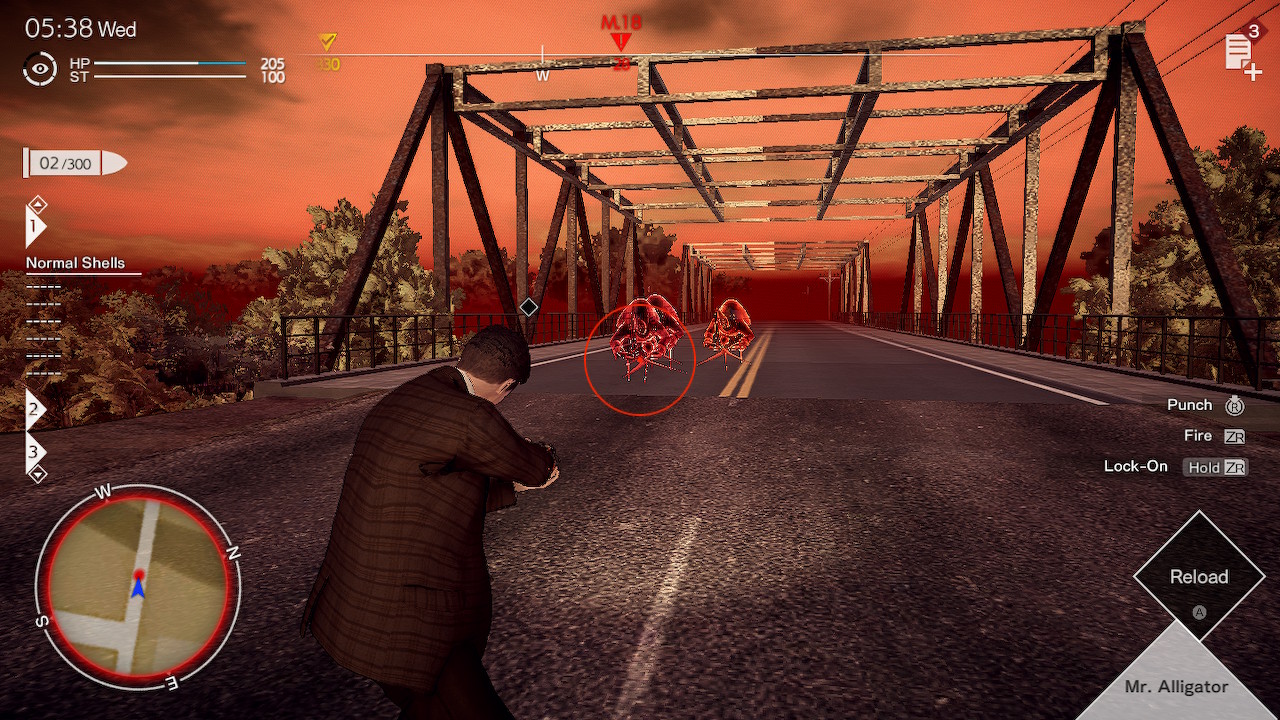 Having said that, though, there is a limit to how far “uniqueness” can carry a game, which is that the game itself actually still has to be good. No amount of uniqueness in the world can save Deadly Premonition 2 from its multitude of shortcomings. Even viewed with the ever generous lens of “it’s so bad it’s good,” Deadly Premonition 2 stumbles far too frequently to be enjoyable. The original Deadly Premonition could maybe be excused as a developer making mistakes with a tight budget on a risky product to create a unique vision, but that excuse loses credibility the second time around when the actual game component of this mess actively performs worse than the first attempt. There’s potential for some interesting story here, but that potential has been buried under a mess of gameplay frustrations, technical problems, and lazily done animations. Unless you’re incredibly invested in the character of York and are willing to slog through some legendarily bad game design to play as him once again, it’s impossible to recommend this title. 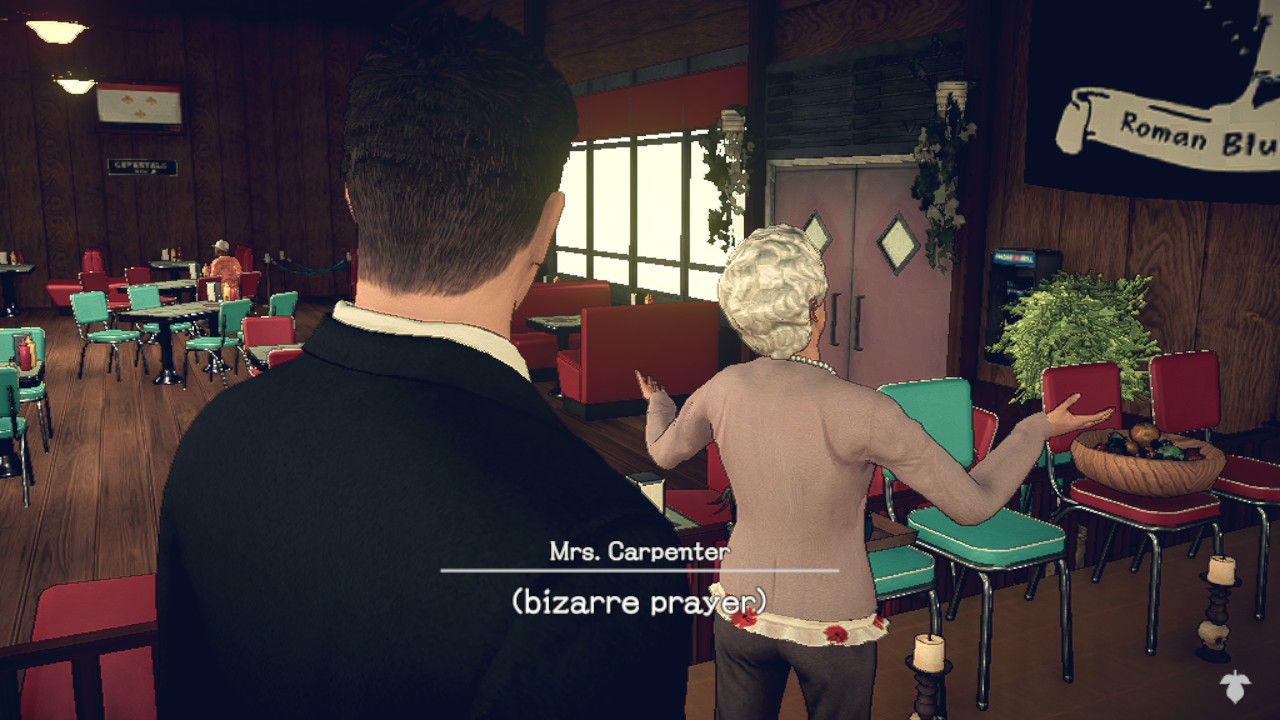 One final aspect that I feel this review would be remiss without at least mentioning is the controversy surrounding its handling of a certain transgender character. Admittedly, the character is handled pretty poorly after their initial introduction, and the dialogue surrounding them (especially by York) often comes off as exceptionally mean spirited. Knowing Swery’s background, his work on The Missing, and the apology issued on Twitter, I don’t believe any of this was done out of malice; it was primarily done as an odd attempt to show off York’s investigative prowess. If something like this is an immediate turn off for you as a player I certainly won’t fault you for that being too big of a sticking point to overcome, but given how Swery’s responded I don’t think it was meant to be genuinely offensive, and if you can get past a mistake like that, it hopefully shouldn’t impact your view of the title too much (at least, not any more than the egregious gameplay and technical issues).

This review is based on a copy of Deadly Premonition 2: A Blessing in Disguise for the NS