Rarely has there been a more energetic time for online horror experiences.  Rather than the expected template of gruesome splatterfests & 1-v-4 asynchronous competitive matches (see: Friday The 13th and Dead by Daylight), developer Question supplants that with a heavier emphasis on atmosphere and unique concepts.  The contrast doesn’t stop at approach, but extends to tone as well.  Instead of honing in on the dumb teen-horror shlock tropes escaping a Big Bad, The Blackout Club equips its tween characters with a wit and arsenal to complete their tasks.  And while it has an excess of worthwhile ideas, some fundamentals—currently—prevent it from achieving its highest potential.

The setting takes place in the suburban town of Redacre during the mid-2000s.  Something is amiss.  A plague of sleepwalking has struck the town, as kids & adults may wake up only to find themselves blocks away from their homes with no memory of how they got there.  Replicating Tales from the Loop and Stranger Things, the kids have a heightened perception of this strange situation compared to the jaded adults.  And since Redacre is in the National Radio Quiet Zone there’s a greater difficulty for them to show proof of this suburb’s dark underbelly. 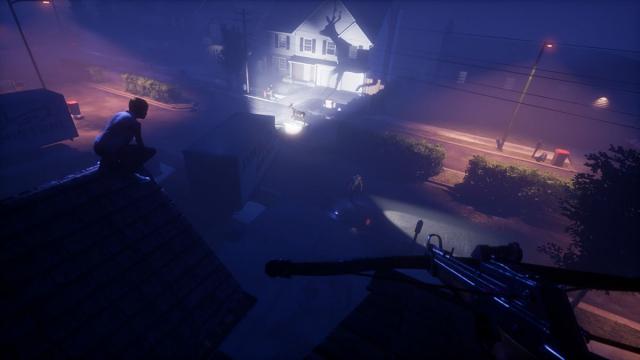 There are two takeaways to consider with Blackout’s prologue:

1.) This is among the best-structured tutorials across all games of 2019.

It’s strange to think of how dull tutorials tend to be and then see one which succinctly captures the tone of the game so well.  I’m also put into something of a bind because I don’t want to spoil too much.  The inciting action here is about a girl with incriminating files on the cusp of revealing proof to the wider United States.  As expected, the paranormal forces at play want to stop her.  I’ll stop the plot details there because this is understood within the first couple of minutes.

The best way to describe why I’m emphasizing this portion of the game is because of its potency and structure.  There’s an extended video essay waiting to be made examining what makes it so effective: the heightened stakes, the gradual increase in difficulty, the mysterious imagery, good variety of tasks, and more.  Although there’s still more to consider, this prologue ties the fundamentals brilliantly with a tense final cutscene that’ll encourage anyone to immediately begin the first mission.

Although there are moments of brilliance through cooperative play, it’s a shame that they’re so stretched out in comparison. 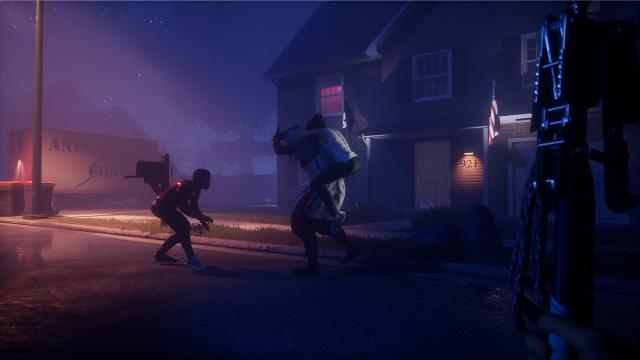 The tools, along with various power-ups, help encourage partners to effectively act as “soft classes.”  My grappling hook & drone gadget combo placed me in a support class whilst preserving the same moveset as everyone else.  Mechanically speaking, I was more often reminded of Syndicate’s cooperative play instead of the expected comparison to the Left 4 Dead series.  More co-op games should use this approach compared to the ‘hero shooters’ of today.  It’s an easy way to ease players into the gameplay routine without forcing them to inhabit *x amount* of assorted characters until they’re comfortable.

Part of what deflates the intriguing world-building comes back to a growing pet peeve of mine: procedural generation.  Portions of the map are kept away until reaching a certain level but, regardless of added complexity, the randomized tasks often come down acquiring something—be it posters or signs—and placing around the map, freeing an NPC, or gathering evidence.  The wealth of tasks fall under this boilerplate expectation, with only some enemy patterns and goal markers mixed around.  Some credit is due to the objective spread; the utilization of above-/below-ground objectives ensures disparate geographies and tonal climates.

Blackout’s stealth mechanics manage some unique tricks.  The main thrust of the game is about avoiding enemy traps, cameras, and humanoid characters.  The two main humans are Sleepers and Lucids.  Sleepers are the hypnotized adults who can’t see but have sensitive hearing.  Lucids (fewer in number) can see and hear.  Mixed together, there’s a great synergy of a capable team maneuvering around the world and selecting which ought to be knocked out. 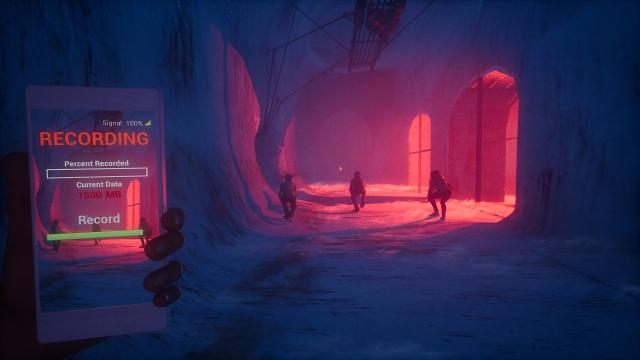 There’s also a respectable panoply of toys found around a map which can serve several purposes.  For instance, a foam grenade softens a long drop and dampens the sound; on top of that, it can be used to permanently or temporarily disable mines and drones, respectively.  There are various distractions to utilize and items to assist in shoving off or subduing enemies too.  Beyond that, there’s even your depleted stamina to consider after each tussle with enemies.  In short, there’s a respectable ruleset of mechanics and extraneous items to juggle that feel expansive, especially after coming off a stealth title like The Church in the Darkness.

One of the most creative ideas is Blackout’s invisible policeman, known only as “The Shape.”  Each action is often known as a “sin.”  Whether it’s trespassing, discovered unconscious enemies, tripping alarms, and other slipups, all of these add up until this enemy is called to personally capture and possess you.  The Shape can only be seen by manually closing your eyes (pressing ‘Y’ button), which is also helpful in discovering small secrets or messages.  If caught, you're now another sleepwalking patrolman that a teammate needs to free.  Done too many times and he’ll eventually kill you.  The Shape is one of the few tangible reasons I understand why Question decided on a cooperative game.  The sensation of closing your eyes and watching the horror unfold of this towering person chase a partner can be just as intense as being the target.

In regards to online enemies and lore, it’s great to see how much Dark Souls played an influence.  To note: the real maximum of players per match is five.  One player with a different persona, and no gamertag above the head, plays as a Stalker - a nosey brat with the same baseline mechanics who can record sins, thus hastening The Shape to capture a player.  From the spawn selection to the echo location of other players, there’s an underlying sense of Stalkers being overpowered.  The nice balance is the relative ease of capturing and subsequently kicking them.  Another dubious method of balancing is the limited opportunity to play them.  Playing a Stalker requires dossiers which are acquired via captured Stalkers in your cooperative sessions.  I just don’t see the benefit in this strict limitation.

In respect to lore, there is a great mix of visible and vague world-building.  Sure, you’ll see otherworldly sights underground but won't have many questions directly answered by books lying about.  One way of eking out some info is from remembering your dream after each mission.  Here’s where things get weird.   The dream will begin with another player asking a question to a deity and a voice actor ambiguously responding.  There’s already a fascinating discussion at play here: using a player’s voice as more content.  This is done by turning on the “Enhanced Horror” system.  Voice actors take on the roles of “Voices, Gods, or Daimons,” to either answer the aforementioned rituals or present subtle in-game hints.  It’s not guaranteed to happen each session but this ‘live performance’ lends Blackout a theatrical element—and it’s not smoke and mirrors. 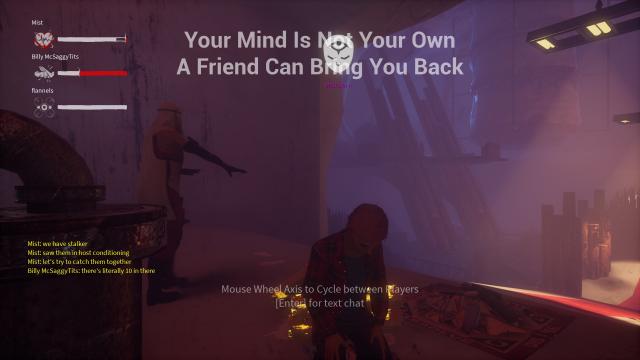 Regardless of adroit level-crafting or nifty concepts, it’s still tough to get excited for such similar tasks as the hours go by and you slowly level up.  It’s important to stress how much of a grind it feels so early on too.  The transition from level 4 to 5 already had me worried about how much XP is demanded to continue.  Those first few levels do a great job of drip-feeding new hurdles and areas, but the brakes are hit on new things to do far too soon.  Even after the declared ‘economy update,’ the rate feels sluggish.  Question appears to have a mental roadmap of a complete game worth spending a hundred hours in, yet some roots of the game still feel like they’re in Early Access.

That not-quite-finished sensation is also replicated in respect to bugs.  It’s worth noting that I didn’t acquire a review copy until weeks post-release, so there were updates Question had put out since then; nevertheless, I experienced texture load-in issues (on Xbox One X), several instances of getting stuck in vaulted windowsills, and other annoyances like glitched-out bodies disappearing.  I’m also at odds with the finicky sound detection in some instances.  There were a few moments I don’t believe warranted rapid investigations and chases by Sleepers.  These complaints aren’t dramatic but are annoying enough to make me consider this being a rushed release. 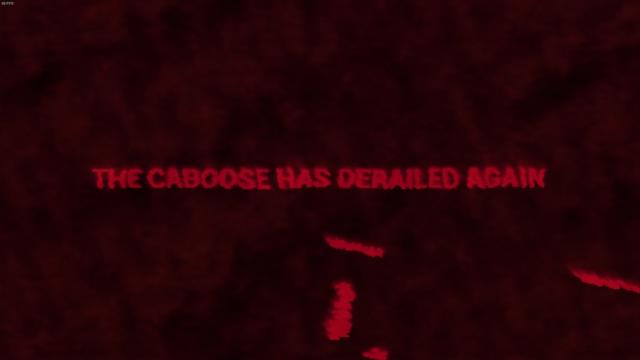 And as intriguing and unique as the lore may seem, there are too few tidbits scattered across hours of repeated runs.  The prologue introduces so many mind-bending concepts in a compressed period that you want level-ups or hidden areas to have incremental bits of lore.  Think of how three randomly scattered notes per mission can entice teammates to venture through each house instead of simply putting up more posters or freeing a captured member (who may just be dead anyways).

It’s annoying to have so many praises for the base co-op play when it’s hampered by an underlying lack of greater purpose.  That impetus of long-term progression is simply not there—yet.

In respect to the audio-visual experience, Blackout is simple and serviceable.  For technical graphics, this modified Unreal Engine has an expected template: good environments, nice lighting, and slightly-off character models.  The kids in particular look too plastic and horrifying.  The growing threat of being chased by The Shape is communicated well by the clean UI.  As an aside, I also dig the early Xbox One layout: a pause menu without being able to exit in-game but instead from the Home page.  Is it normal to be nostalgic for that?

Sound design is mixed incredibly well, but the oft-repeated Sleeper lines showcase how limited the adults are as characters.  There is opportunity to associate these patrollers with their occupations more intimately.  Think of the variety: spout car mechanic jargon, food recipes, military training, and on and on.  If you’re going to have samey character models at least spice up the variety in other respects.  Minor issues aside, visual and audio themes consistently hit to make this world feel unnerving and unique. 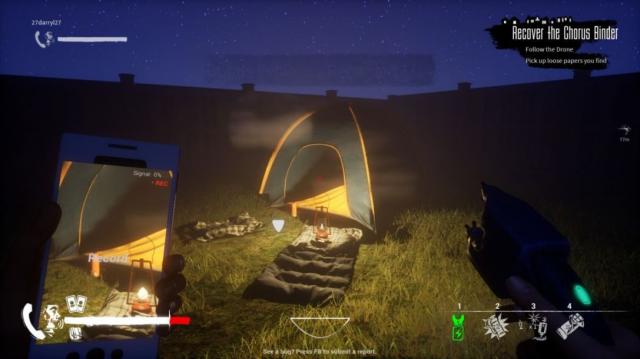 Like the sleepwalking enemies, The Blackout Club is constantly grasping for anything within reach.  There are so many pleasant surprises which make it wholly unique from slasher-horror clones; and yet, the same damn issue of launch content comes in to injure my enthusiasm.  Because of this I’m making a special consideration: if Question supports it in a similar way to the post-launch of No Man’s Sky or Dead by Daylight then this’ll be a must-have.  For now?  You’re free to sleep on it, with one eye open.

This review is based on a digital copy of The Blackout Club for the XOne, provided by the publisher.