Heave Ho should come bundled with a six-pack of beer. A local multiplayer game where up to four players clutch, throw, and (inadvertently?) destroy each other, it's ideal fodder for a game night with junk food and a few adult beverages. Designed around a simple, accessible hook—the ability to grasp any solid point and leverage your body from that hand-hold—Heave Ho delivers a funny, frantic 2D platform adventure, played either with friends or alone. The game's main drawback, apart from its lack of staying power, is that none of its dozens of levels require cooperation; every stage is playable and beatable solo. As a result, the primary fun of the title comes not from creative, outside-the-box thinking, but from the chaos of four sets of wobbly arms clinging together for dear life.

The controls in Heave Ho couldn't be simpler. The left stick manipulates each character's double-jointed arms and the left and right triggers close and open the left and right hands, respectively. Using these approachable controls, plus the physical realities of the game—momentum, leverage, and gravity—players can cross chasms, climb up walls and across ceilings, and avoid hazards like electrified platforms and spikes. 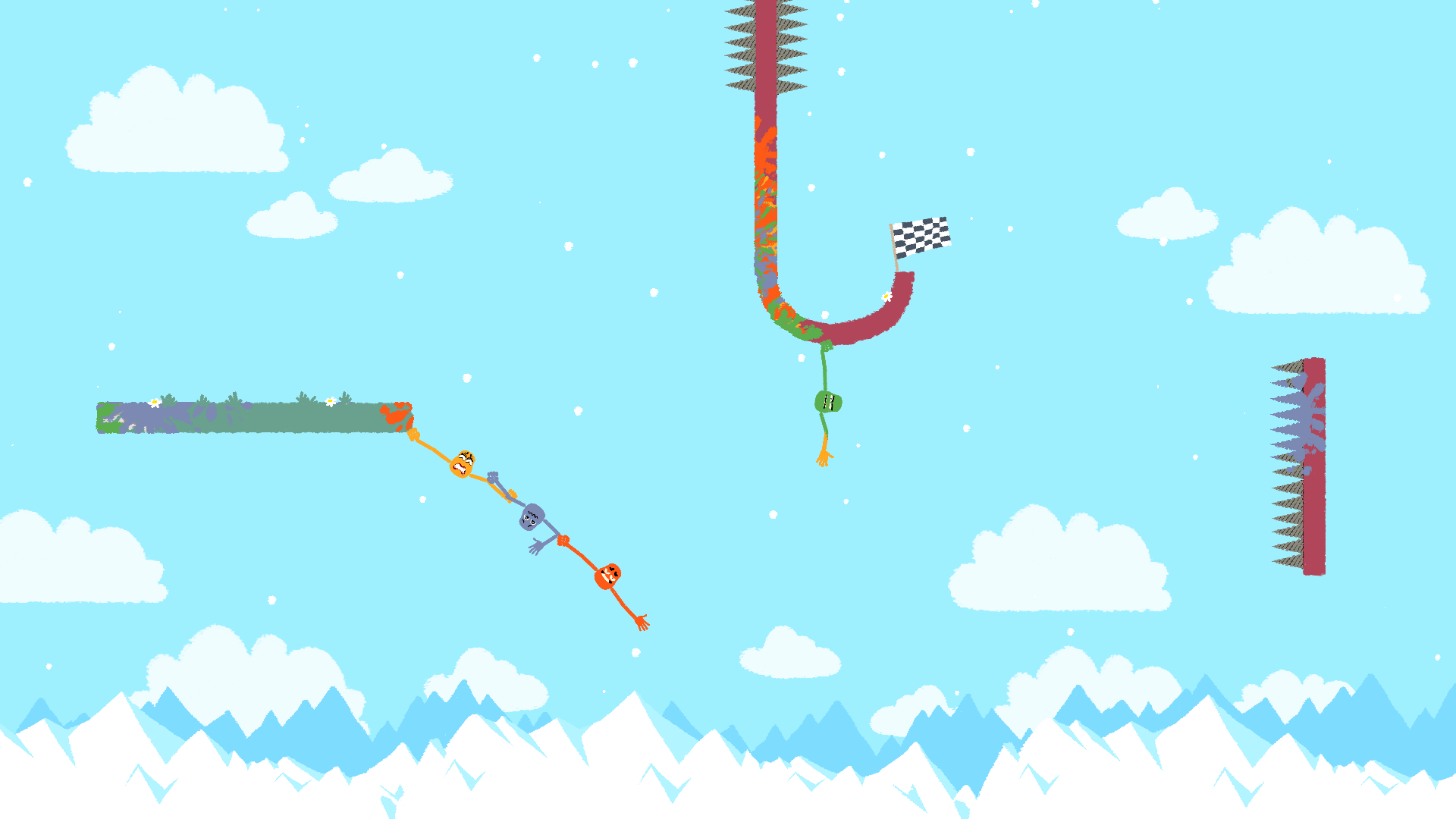 The game's straightforward and uncomplicated climbing system is, ultimately, its greatest strength. Grasping ledges, platforms, and other players is easy and intuitive, and the act of free climbing under overhangs and jumping across bottomless gaps without a net a thrilling experience. It would be interesting to see how developer Le Cartel could fold these movement mechanics into a larger, more integrated climbing game—something, perhaps, in the vein of Grow Home.

For the time being, though, the mechanics operate in bite-sized levels. There are 40 stages in the main adventure—eight themed worlds with five levels apiece—and another 40 super-challenging stages after that. Le Cartel starts things off with undemanding tasks, then steadily adds twists to create more problematic trials. Some areas are cloaked in darkness, while others introduce rope swings and rotating platforms. The most ingenious levels arrive in the seventh world, where all blocks and hand-holds are invisible. Only by dying—and spraying the level with your colorful remains—can you illuminate these hidden fixtures.

The front half of the game should take around 90 minutes, although you and your buddies can revisit completed stages to beat your best times and snag collectible coins, used to purchase new character skins from the main menu. The latter half will take a big longer, due to some tricky jumps and lots of deadly hazards. In general, Heave Ho is a fun but fleeting experience. It's a diversionary party game that won't unseat the Mario Karts and Smash Bros. of the world.

It is worthy for one or two game nights, however. The easy-to-understand controls and mechanics make it a democratic experience, and the need for clear communication and synchronized timing—a tall order for up to four independent thinkers—sets up many hilariously unplanned fatalities. Moreover, quick restarts after death and checkpoints in some of the longer levels mean that even the clumsiest player won't grow frustrated.

The big drawback to the cooperative side of things is that, ironically, cooperation is never truly necessary to succeed. Yes, you will need a friend or two to secure those optional golden coins, but not to reach each stage's end goal. All four players could simply move from beginning to end in a single file. In the plus column, this means that solo players can enjoy everything the game has to offer without help; in the minus column, it means fewer opportunities for outside-the-box problem-solving. 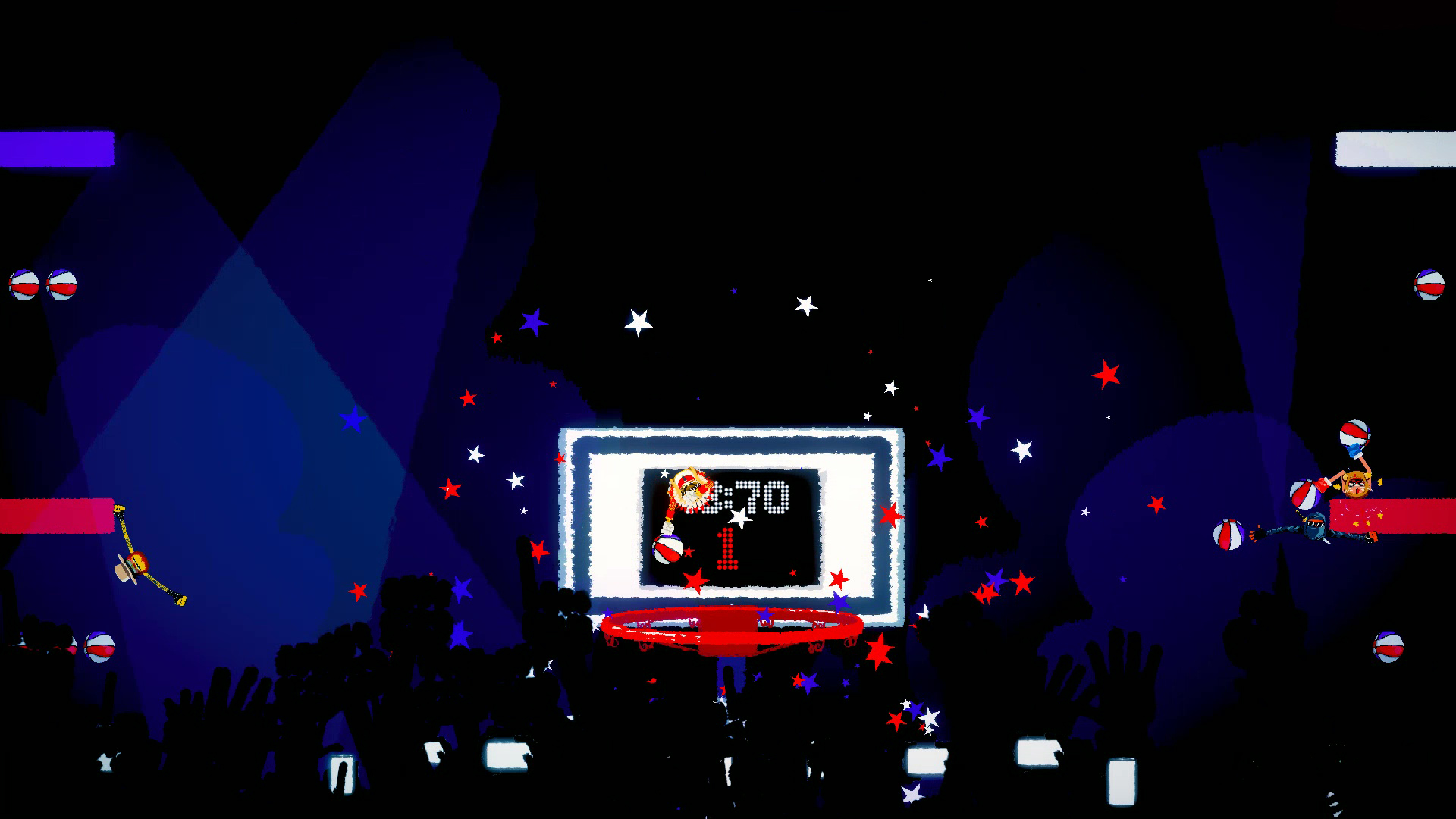 Apart from the main game, Heave Ho offers the aforementioned shop where gold coins are exchanged for new skins, plus a list of in-game achievements, e.g., finish a run with zero deaths. Missing from the main menu but included at random in levels are several mini-games. These include a dance-off in which players must replicate the moves of a performer on stage and a game of basketball.

Grab a beer and some friends and have a fun time with Heave Ho. There are multiplayer hijinks galore, 80 levels with unique challenges and themes, and a bunch of cosmetics and achievements to unlock. The game isn't especially long or replayable, and the opportunities for creative puzzle-solving few and far between, but it's fine for low-stakes couch co-op action. Accessible controls, approachable gameplay, and quick restarts make it a good match for players of all skill levels and attention spans.

This review is based on a digital copy of Heave Ho for the NS, provided by the publisher.