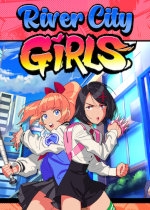 Shop 'til you drop kick.

River City Girls is a different kind of side-scrolling beat-'em-up. Like its spiritual predecessor, River City Ransom (check it out via the NES game service on Switch if you're an online subscriber), it merges brawler mechanics with light RPG elements and sandbox gameplay. It also playfully flips the script, sending heroines Misako and Kyoko after their kidnapped boyfriends Kunio and Riki, both former protagonists. While this newest installment in the River City (Kunio-kun) franchise delivers fun moment-to-moment gameplay—not to mention stellar visuals and music—its experiments with an open world produce equal amounts of joy and frustration.

The game begins in River City High School, where students Misako and Kyoko, in the middle of detention, learn that their sweethearts Kunio and Riki have been kidnapped. Soon they're fighting their way out of school and through six city districts, punching, kicking, and throwing anyone or anything that stands in their way. During their quest, the girls will interact with several NPCs from the River City franchise, like Hasebe and Mami, and a couple of guest characters from Double Dragon. 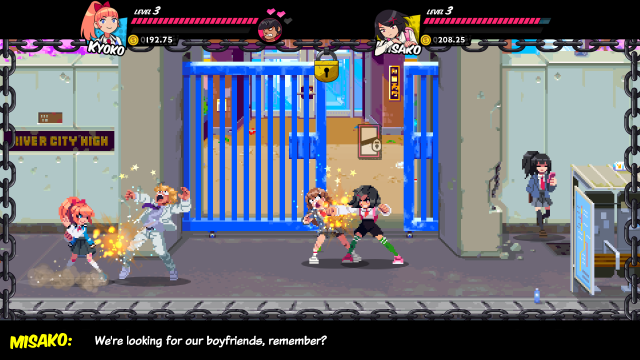 Despite a rushed ending and some cheesy dialogue, the story in River City Girls serves as a fine vehicle to get Misako and Kyoko from one fight to the next. The true star of the story, however, is its presentation. The artists at developer WayForward deliver the beat-'em-up's narrative via spectacular anime cutscenes and gorgeous black-and-white manga-style panels. It's a real treat for the eyes.

Similarly pleasurable is the game's 2D brawling action, elevated by two-player local (only) co-op, snappy controls, and a diverse collection of moves, weapons, and wearable items. Here are the basics: Y delivers a light attack; X a heavy attack; B a jump; A a collection of energy-draining powerful moves; and the right bumper a block. New maneuvers, earned at story junctures or purchased from the town's dojo, allow Misako and Kyoko to combine these commands with directional inputs to perform several complicated ground, aerial, and grab attacks against a variety of enemy types. 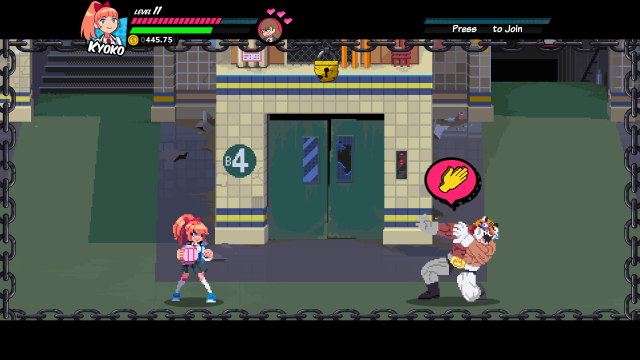 In additional to tailoring their offensive and defensive approaches with a wide range of moves, players can customize Misako and Kyoko with an assortment of accessories that provide several perks and buffs. Spiked knuckles, for example, increase stun damage by 10%, while the padlock bra doubles the velocity of thrown weapons. River City Girls also introduces a clever recruitment mechanic whereby the last enemy standing will sometimes beg for mercy, allowing either heroine to recruit the foe and then summon him or her at will in a future battle—almost like an assist trophy in Super Smash Bros.

Although moment-to-moment gameplay in River City Girls is strong, thanks to tight controls, character customization options, and dynamic action, fighting fatigue can and will settle in. Even as the game introduces several enemy types and lots of weapons, it tends to rely on the same kind of scenario: a room on lockdown with several waves of baddies. You can only fight in so many of these monotonous melees before needing a break. Fortunately, the game provides many diversions in its open world, including alternate routes, NPC quest-givers, and shopping opportunities. Unfortunately, WayForward leverages its sandbox in a number of aggravating ways, forcing a lot of tedious backtracking and obscuring the nature of purchasable items and moves until after you've spent your cash. 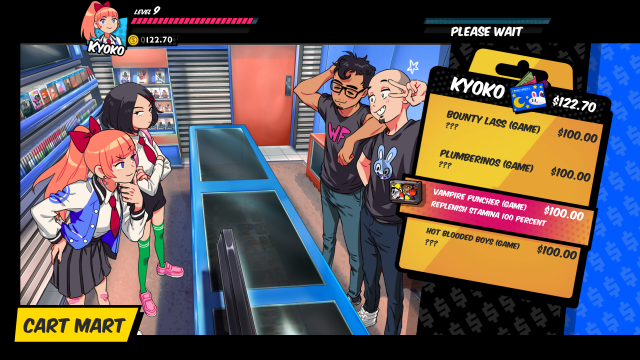 Money in general in River City Girls is a strange thing. You could spend hundreds on a mystery move or trinket, only to discover it's relatively useless for your overall fighting strategy. Furthermore, upon death you forfeit roughly 30% of your total wealth. The best tactic, then, is to empty your bank account before difficult fights by purchasing expensive items and accessories, but, again, the perks of those items are revealed only after they're bought and used. If you're unlucky enough to lose your money after repeated failed attempts against a boss, you'll need to begin the tiresome process of grinding for more cash.

Ultimately, as the credits roll, it's difficult to say if the open world structure in River City Girls is a boon or a liability. The title might be more enjoyable as a level-based linear brawler, in the style of Final Fight or Streets of Rage.

Any downsides notwithstanding, the sandbox of River City Girls means a fair amount of content. There are six large sections of the city, each with unique NPCs, quests, and optional areas. Moreover, when you've finished off the final boss, you'll unlock two additional playable characters and a New Game+ option that retains your items and level, but resets all story content and adds hardier enemies. 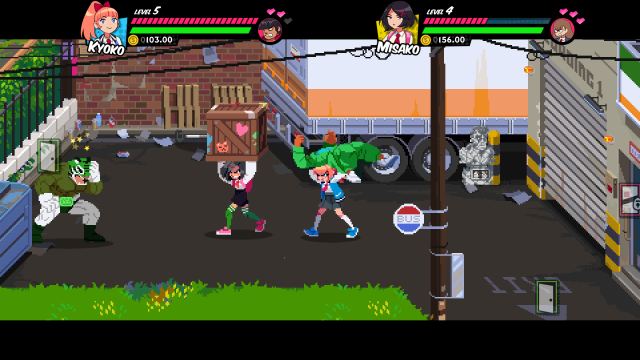 One area where the game never disappoints is production value. Apart from the anime cutscenes and manga panels, River City Girls sports excellent pixel art and animations, and a wonderful synth-pop soundtrack courtesy of artists NateWantsToBattle and Chipzel. The best tunes of the bunch are fully-vocalized songs performed by Megan McDuffee, including "Bully" and "Rich". This is one of the better soundtracks of the year.

In the end, River City Girls successfully channels the spirit of the Kunio-kun franchise. Its dynamic fighting, character customization options, and support for two players in local co-op (sorry online players) make it a nice entry in the series. Tiresome combat scenarios, tedious backtracking, and a lack of transparency with consumables, accessories, and moves undermine its potential, but strong momentary gameplay and extraordinary production values help buoy the experience.

This review is based on a digital copy of River City Girls for the NS, provided by the publisher.