Competent, even a downright blast to play more often than not, but it won’t soon be overtaking the leaders of the genre.

Take Age of Empires sensibilities and add Dinosaurs, and you might have Warparty, an indie RTS throwback that at least partly impresses. Conjuring bands of dinosaurs and raising zombie hordes from the ground proves to be an enjoyable endeavor that feels WarCraft-esque mechanically, while offering its own prehistoric twist. Yet, after spending several hours grinding and battling my way to Jurassic Age supremacy, the novelty started to wear off, and the experience began to feel akin to “WarCraft lite”. Warparty manages to be a mechanically solid and enjoyable RTS that gets somewhat bogged down by occasional repetition, limitations, and imbalances.

To its credit, there is no shortage of content to be had in Warparty. There’s actually a nice palette of relatively diverse features to keep things from feeling too stale. Right off the bat, you’re given a slew of options to mess around with. Along with a few multiplayer modes to engage in with enemy AI or real opponents, there are three sort of mini-campaigns with six scenes each. Every path allows you to follow a different story and take on the role of a unique hero who leads an army of one of three factions. 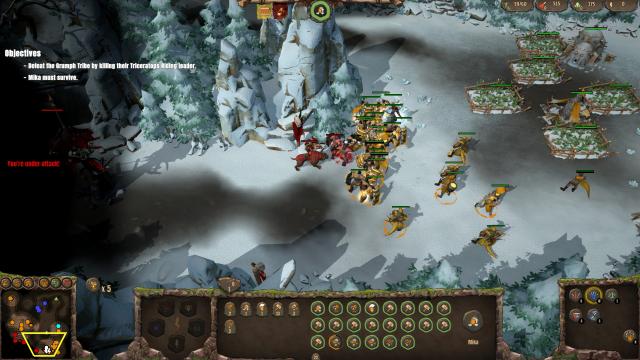 The basic premise revolves around an ancient power called the “Go’n” which can control life and thus shape the course of history. With this power, all three factions seek to utilize this relic for their own gain, which more-or-less comes at the expense of the other tribes. This is cleverly interwoven into the campaign, as you’ll often notice overlap between the narratives you’ll play through. As a whole, though, the solo mode feels like something of an afterthought, with some pretty bland objectives that involve “go here and take out these guys” or “defend from attackers for x amount of time”. You also sometimes run into ambiguities with some of the missions, and it’s not always clear what you should be doing. For instance, I had perished several times abruptly on one mission without explanation before realizing I was supposed to protect captive Stegosauruses and make sure they survived.

The three factions include - a human and dinosaur tribe called the Wildlanders; the Vithara, which are a group of rogue dinosaurs led by a sage that taps into the power of nature; and my personal favorite, the Necromas, commanded by a Necromancer who can turn corpses of defeated foes into zombies, White Walker style. These three groups largely contain their own dynamic and unique characteristics, but stop a little short of, say, StarCraft, in utilizing attributes vastly distinct from one another. Indeed, there's a fair bit more overlap in their structure than differences. 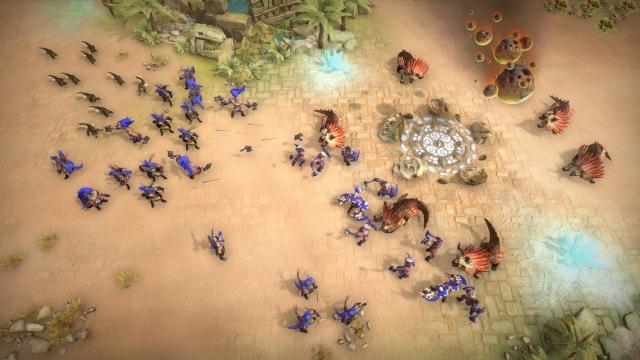 Each of the three factions comes with several battle units, buildings, and upgrades spread across three tiers of settlement upgrades. Buildings can be dropped freely on the map absent any sort of grid. The Wildlanders and Necromas use two different resources scattered about the maps - food and crystal - while the Vithara (dinosaurs and sage) also require "energy" as a third source. The units range from tiny reptile pawns which can be churned out pretty quickly, to large t-rexes and woolly mammoths. Busting out these larger, more impactful units is when the fun factor really gets dialled up a notch. Each group also comes with a respective “hero” unit, which use power to wield a variety of helpful magic spells and buffs.

Each clan is fun to play around with in its own way, and comes with its own exploits, strengths, and weaknesses. The Wildlanders offer a nice blend of human and dinosaur forces, and proved to be the most manageable and resourceful in my experience. The Necromas’ ability of raising zombies from the dead is an enjoyable gimmick, and one which helped me tremendously in the heat of battle, thanks to its usefulness in rapidly building forces. 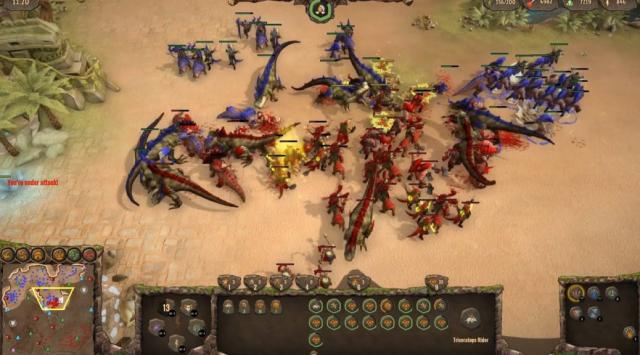 There is a slight issue with this ability, however. Since the game relies on hot keys and creating designated “groups” of units, newly summoned zombies need to be incorporated into these squads every time they're raised. This makes Warparty’s already touchy system of micromanagement even tougher to deal with when playing as the Necromas. The game lays out a decent set of battle commands, such as attack and patrol, though at times your forces just don’t seem to quite do what you want them to. Some will get split off and chase down retreating foes, while some stay put, etc. And since Warparty has a knack for sending gaggles of baddies at you from just about every angle, managing things in chaotic moments can feel like an exercise in futility.

The Vithara posed its own set of frustrations, as well. Despite proving fun to command, and largely being the narrative focal point of the game, these guys seem underpowered compared to their two rivals. They’re oddly the only group to lack defensive structures, making it tough to ward off attackers - and trust me, they will be frequent. The fact that they also need to gather three resources rather than two makes them the trickier to deal with. Granted, the Vithara possess the unique ability to convert neutral dinosaurs scattered around the maps, but this takes a lot of power, and thus time, to execute anyway. 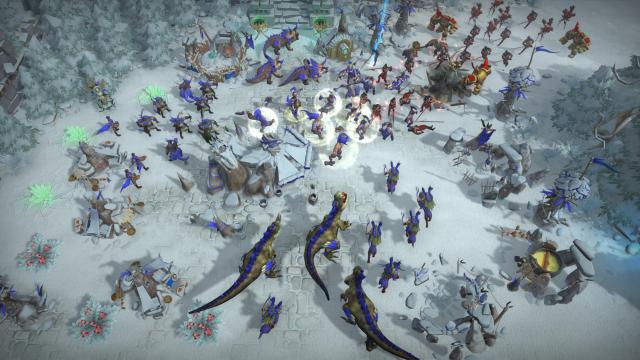 The campaign as a whole feels imbalanced in terms of its difficulty too, which seems to plummet and spike erratically. While you’re given some pretty simple tasks at various points, missions that require you to wipe out all enemy forces can be frustrating. Not only do the AI forces constantly build structures at random areas - which can be tough to pinpoint with the fog of war - but you’re frequently greatly outnumbered in units. No matter how well you excel in cranking out waves of fighters, it just always seems like your opponent has loads more to counter you with. Even using the game’s wise inclusion of a difficulty setting, just completing the campaign on “very easy” was a grind for these reasons.

Still, Warparty is clearly meant to be a multiplayer experience, or at least a basic arena battle game, and there are plenty of options to get the most out of the game here. You can engage in a Skirmish mode with enemy AI, playing three types of games within a handful of maps; a basic deathmatch, King of the Hill, and Regicide, where you must protect your Chieftain. These can all be enjoyable in their own way, particularly the more focused King of the Hill, where you must lock down a shrine as long as possible to gain points.

You can also play a survival mode, which I enjoyed because of its more stripped-down nature and inclusion of incentivizing online leaderboards. Also, while the game usually likes to inconveniently scatter its resources all over the map, most are unified around a single, accessible area in this mode. Still, going head-to-head with real opponents is the most fun; at least in the few matches I was able to play. 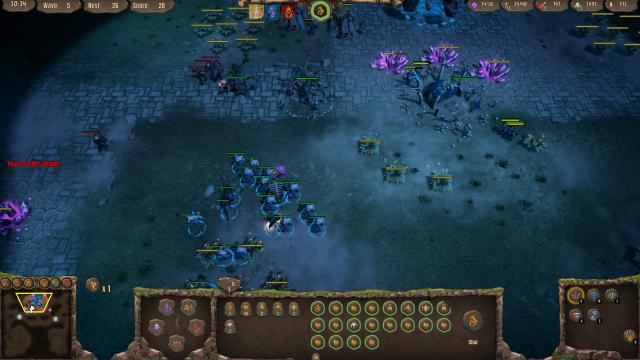 Being an indie title that - at the time of writing - is still very new, I had to search through some quite vacant servers. After a couple of hours of seeking on online matchup, I only managed to find an opponent a few times. A couple of these were exciting battles, while in another I got completely steamrolled within 10 minutes. Still, aside from its lack of customization, the online mode definitely has the potential to provide tons of fun and replay value. It just needs more players.

Warparty is a fun new take on a casual-friendly RTS with neat themes and a decent foundation, albeit one that feels a bit half baked at times. The balance and difficulty could use some tweaking, for example, particularly in the campaign mode. And while there’s plenty of content - some of which does show off the game’s depth and ingenuity nicely - additional maps could help further flesh things out. That’s not to say Warparty isn’t a competent, even downright blast to play more often than not, but it won’t soon be overtaking the leaders of the genre.

This review is based on a digital copy of Warparty for the PC, provided by the publisher.