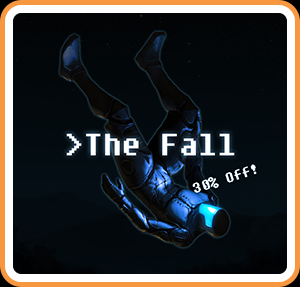 Usually a system gets part one of a planned trilogy before part two, but the Switch — a home console you can take on the go — is all about breaking the rules. So, too, is The Fall, a cerebral sci-fi adventure game where an artificial intelligence bends and ultimately breaks the protocols governing her behavior. As a study on artificial life and an exercise in science-fiction storytelling, The Fall is outstanding. As a puzzler, it's clever and challenging, with riddles hitting that sweet spot between straightforward and obtuse. As an action game, it's a bit clumsy and wooden.

The Fall begins with a person crashing down on an unknown planet from high in the atmosphere. Unconscious and, potentially, critically injured, the mystery person is manipulated by the A.R.I.D., or Autonomous Robotic Interface Device, programmed into his suit (think of the relationship between Cortana and Master Chief, and you'll get a sense of the mechanical and emotional connection here). A.R.I.D., or Arid as she comes to be called, explores the crash site and the derelict facility above, searching for a medical facility to revive her pilot. Along the way she will encounter a hostile A.I., a host of indigenous life forms, and a lot of head-scratching puzzles. 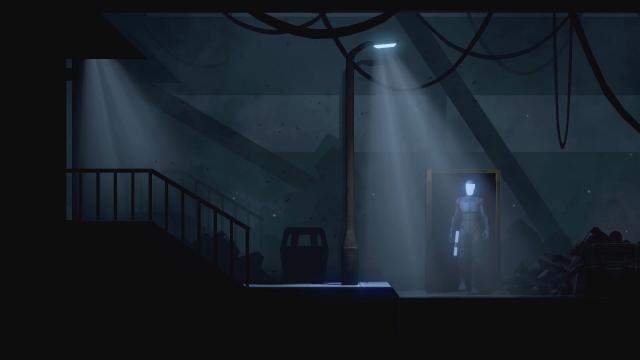 Part Metroid, part Monkey Island, The Fall is a mélange of 2D shooting, exploration, and problem-solving. Over the course of four hours — a regrettably short running time — players will guide Arid through several subterranean environments, all in various states of disrepair. In order to make progress, the resolute A.I. must solve environmental puzzles, fend off enemy robots, and gradually unlock access to gated-off functionality.

When The Fall focuses on its strengths — story-telling and puzzle-solving — everything works. In true point-and-click fashion, Arid can inspect and/or retrieve items in the game world and then apply those items to fixtures to solve puzzles. Gratefully, developer Over the Moon finds an approachable middle area between problems that are painfully-obvious and frustratingly-obscure. Sure, there are a handful of head-scratching moments and a few puzzlers that demand outside-the-box thinking, but there are enough visual hints and leftover logs to set players on the right path. Besides, getting stuck a few times is part of the fun. 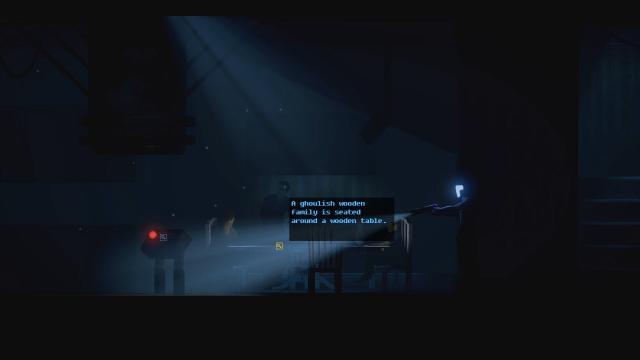 All this puzzle-cracking takes place alongside a sinister, cerebral story-line focused on difficult questions. What are the limits of robotic intelligence? How valuable is one life? Have humans misappropriated artificial life forms? What would you do to survive? Like the best science fiction, it's all about human nature, scientific possibilities, and viewing current social and technological norms through a futuristic lens. The Fall is great sci-fi, and one of the better stories of the current gen.

Combat, seemingly shoehorned into the game, is far less successful. Arid will encounter several enemies during her adventure, both robotic and organic, which must be dispatched. Using the same control scheme employed to search for clues — holding the left trigger to unholster her sidearm and moving the right stick to aim up and down — Arid can engage in firefights with armed robots and local fauna. Unfortunately, aiming is slow, deliberate, and clunky, and what works fine in leisurely-paced exploration segments feels wooden and unresponsive under fire. There's also a rudimentary cover system, but it too is cumbersome. 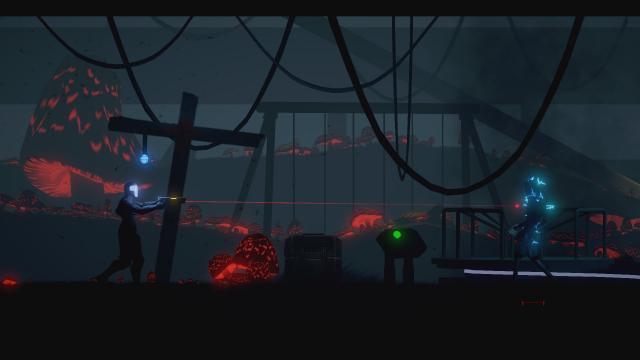 The Fall isn't the prettiest-looking or sounding game, but it has atmosphere to spare. Its grim, dank, and decaying environments suggest a facility far past its prime, slowly losing its battle with the elements. Its soundtrack, heavy with throbbing industrial music and alien sounds, is suitably unnerving. This isn't Metroid music, but it's an acceptable proxy.

Depending on your gaming predilections, The Fall might be a worthwhile investment. If you're looking for a thoughtful sci-fi story and/or a point-and-click adventure in the LucasArts mold, and can tolerate the short running time, this is a good pick. If you want satisfying action, in the vein of Metroid, you may be left cold.

This review is based on a digital copy of The Fall for the NS, provided by the publisher.