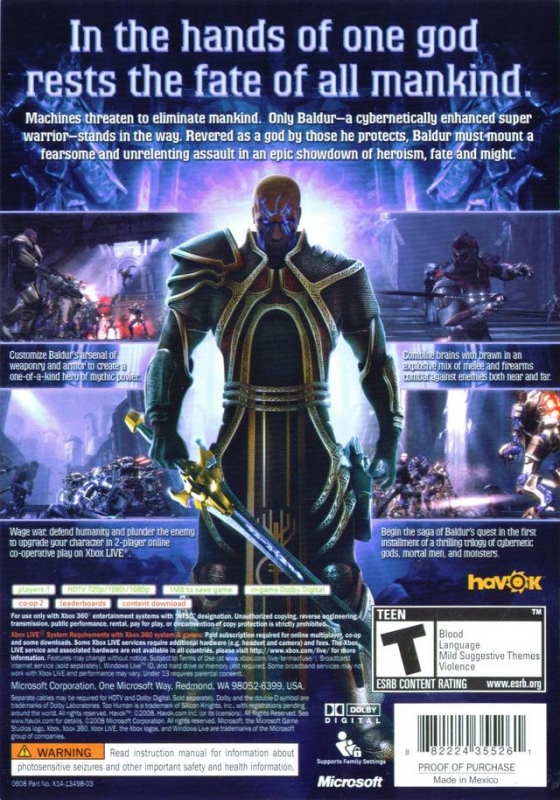 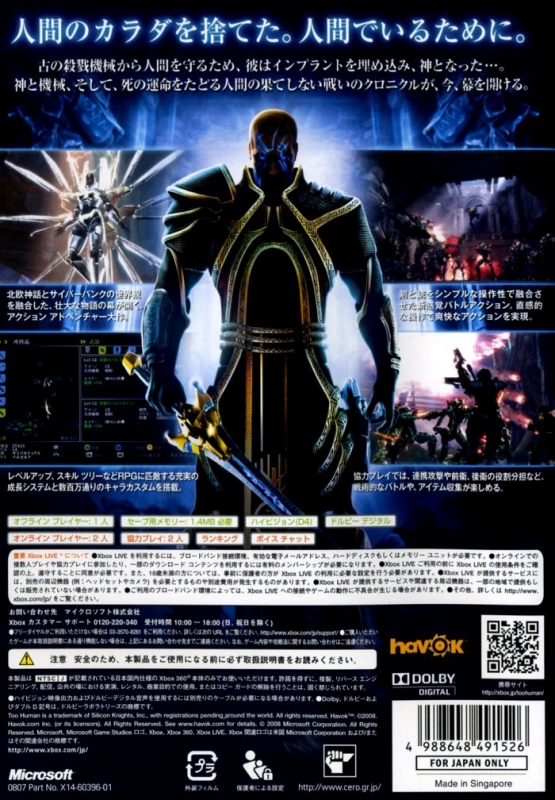 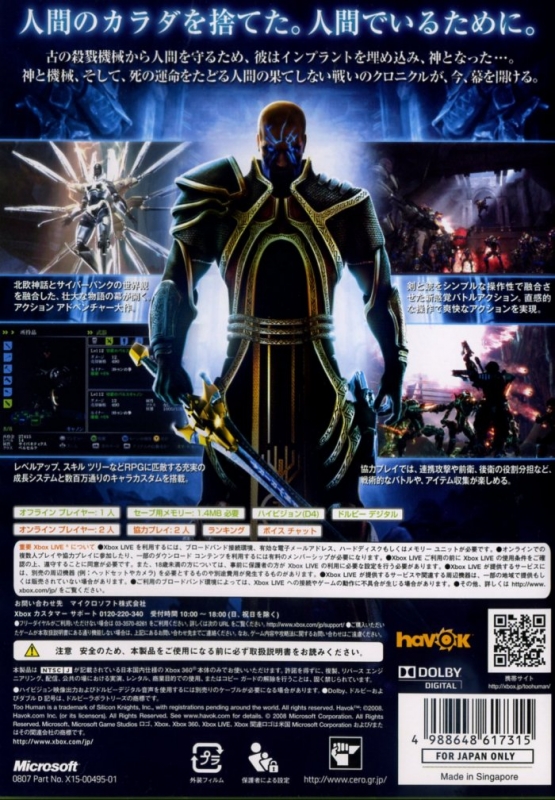 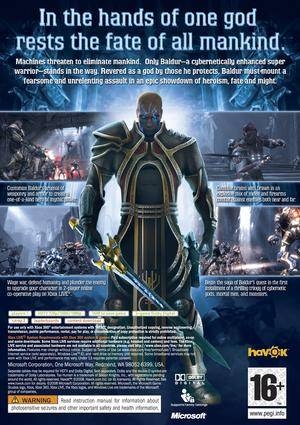 Today is a good day to die.

In Too Human you play as Baldur; the main character in a game world which combines futuristic technology with Norse legends. Humanity is under threat, hunted to near extinction by a race of machines, and has been forced to flee to the city of Asgard. Here the humans fall under the protection of the Aesir, a group of powerful Gods. Baldur is one such God, and his overriding mission is to take the war to the machines and protect humanity. The story of Too Human is told from Baldur’s perspective and has a number of threads to it; the interactions between the different Gods, Baldur’s personal and romantic relationships, the betrayal of the Aesir God Loki, and of course the war itself.

It’s a fairly unremarkable story. Some of the more intriguing storylines have a lot of potential, such as the concept of a city under siege and humanity playing a back seat to the war games of Gods, but they’re never really the focus of the story. Even when these plot lines are in the foreground, the game’s presentation is never grand enough to convincingly or entertainingly present them, and so you’re left with fairly ordinary storytelling. There are some redeeming features to the story, such as the charismatic villain Loki. He treads that fine line of genius and insanity, looks frail and skeletal, yet at the same time he’s clearly deadly. Unfortunately, the game spends the entire 12 hours that it lasts merely setting Loki up as the main villain, leaving any resolution to the story for the (at the time intended, but now very uncertain) sequels. 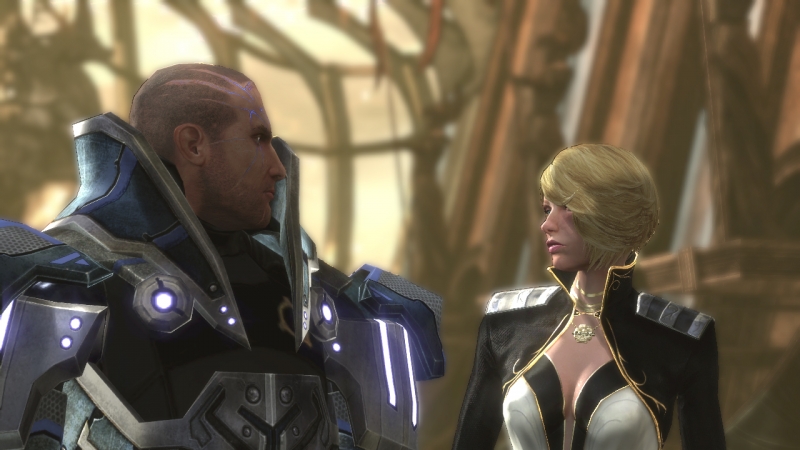 Before you begin the game you must first choose your character class. There are five different classes to choose from; Berserker, Champion, Defender, Commando and Bio Engineer, and although they’re all very similar and share the same core gameplay mechanics, they do have different strengths. For example; the Bio Engineer is the only class with the ability to heal both himself and others, the Commando is much more proficient at ranged combat than the others, the Berserker is the heavy hitting melee class, the Defender is a tank (in the non-literal sense), and the Champion specialises in air combat. However, because the core gameplay does not vary between the different classes, the entire class system in Too Human seems somewhat redundant.

Basic combat is divided into ranged and melee combat. The melee combat system is a combination of hack ‘n slashing, combos, and juggles, whilst ranged combat consists of your standard sci-fi firearms. Melee combat is clearly the more prominent of the two. Where Too Human sets itself apart, and where it’s criticised so heavily, is in the decision to tag combat to the analog sticks in their entirety, therefore removing player control over the camera. It was a brave decision, but also the wrong one in my view. The strength of this system is that mapping combat actions to the analog sticks gives the player more gameplay options and there’s a greater level of finesse to the controls. On the other hand, the player has almost no control over the camera. No matter how polished and refined the resulting camera system is, it still cannot compensate for the lack of player control over it. The camera is a problem in Too Human, and it’s one that I feel outweighs the benefits associated with combat being mapped to the analog sticks.

Melee combat utilises various combinations of left and right analog stick-twitching to send Baldur flinging from foe to foe. He’ll smash into an enemy, and depending on your stick movements you’ll perform a certain attack, then once you dispatch that enemy Baldur can be made to dash to the next enemy, and so on until you’ve emptied the room. At its best it’s a really high-paced and fluid sequence of attacks with Baldur flinging himself around the room slaughtering enemies; all controlled and influenced using subtle pushes of the analog sticks. 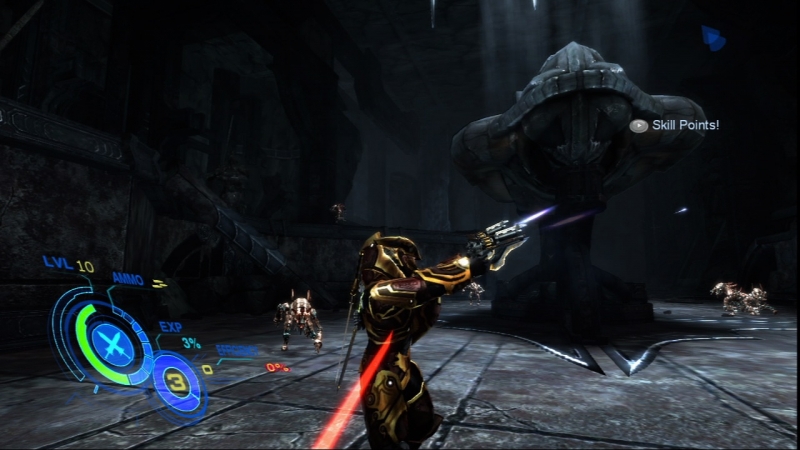 Unfortunately, this satisfying sequence of fluid attacks can often be disrupted by annoying camera angles that obscure the action. The camera is always controlled by the computer, and although you’re given the option of selecting from one of several different styles of camera angle they’re all variations on the same angle, and none of them offer the ideal view nor give the player any control. These arbitrary camera angles really don’t lend themselves to Too Human’s style of gameplay where you will often be surrounded and flanked by large groups of enemies that you will need to attack in all manner of directions. Another problem is that sudden camera angle changes will often result in Baldur walking in the opposite direction to where you actually intend for him to go. Generally the camera problems are more an annoyance than anything else, and they’re certainly not a game-breaking problem, but they could have been entirely avoided.

There’s also an experience system in Too Human, and every time you level up you gain additional skill points which you can then spend on various skills on your skill tree. Each of the five different classes has its own unique skill tree, although, to be honest, the skills don’t vary that much from one class to another at all. There are a handful of different skill types varying from things like passive modifiers, to active auras, to devastating area of effect attacks. These are common to all of the character classes, the only differences are the effects these skills have from one class to another.

Too Human is also pretty heavy on loot; much more so than most action games of this type on consoles. Most of the time you’ll face off against small groups of enemies and typically each group will throw up a handful of different items for you to collect. These items vary from equipment such as: weapons, armour, boots, gloves, and so on, to runes (which can be inserted into your equipment), blueprints (which you use to construct more high-ranking equipment), health, and money to spend at the two shops in the city. 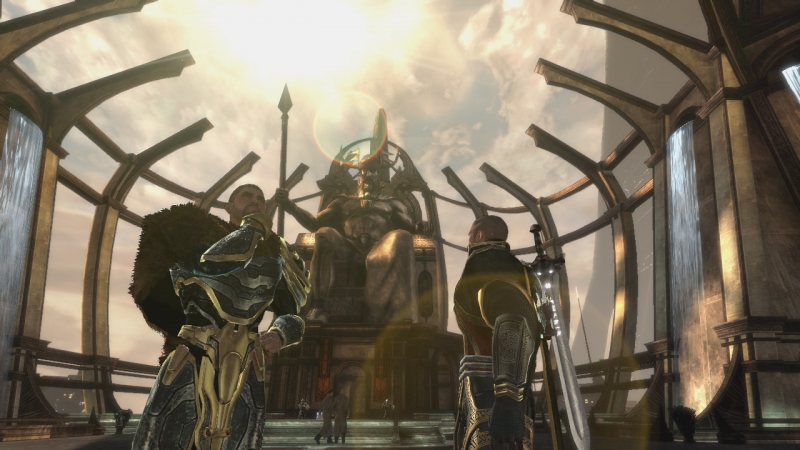 The problem with such a heavy focus on loot for a console game is that it will often lack community features to enable you to trade, compare, and generally show-off your loot. Too Human does little to combat most of these problems given that it only includes two player co-op and there’s no public lobby system. As such, the deep loot system benefits only the gameplay side of things (the finding of better equipment to make your life easier) rather than the community side, so it falls short of its potential and does little to really extend the title’s lasting appeal. On the plus side it’s relatively easy to sift through your loot thanks to the neat organisation of your inventory and easy to understand functions, although for some reason there is a noticeable delay between your commands and their execution on the screen when you’re sifting through the menus.

Graphically the game is pretty average. There are four levels in total, and they all focus on different parts of the world outside of the city. The aesthetic is quite bland; most of the game takes place in massive hallways, and there’s very much a sense that these are abandoned technologically-advanced ruins. The scenes are all vast enough, although you’re very much kept to a strict and linear path, so you never really feel all that close to, or convinced by, the scenes in the distance.

There’s not much variety to your enemies, and they all lack personality and style. Your tactics are rarely challenged either (and therefore rarely change). That’s not to say you won’t die a lot, because unless you’re the self-healing Bio Engineer you will (the other classes are solely reliant on health dropping in the loot you get from slain foes). The only gameplay punishment for death is slight damage to your equipment which can be repaired in the city. But who needs a real gameplay punishment when the death sequence in itself is a punishment? Every single time you die you’re presented with a laborious and unskippable cut scene of a Valkyrie coming down to gather up your body and take you off to Valhalla. It’s the same every time – the same horrible animation, the same awful music – it really is punishment enough. However, it’s undoubtedly a positive that besides the brief loading times at the start of the game there are hardly any loading sections during the rest of the game (they’re hidden in the cut scenes), which leaves you to get on with the fast-paced combat in your own time. 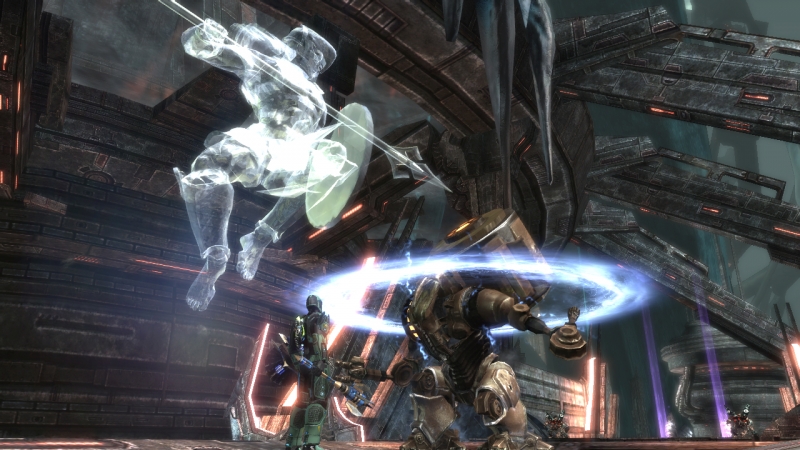 The combat animations are generally pretty good; scything through groups of enemies can often be both a delight to play and watch. Sometimes, however, Baldur can get caught on an object if it’s in your line of attack and this will break up the attack and force you to try again. Also, when an enemy dies at the start of a lengthy attack you will be left watching Baldur flail around in mid-air, waiting for him to finish his combat animation, and that can look a little bit ridiculous.

My first play through of Too Human took exactly 12 hours. Your mileage will vary depending on how much you like to keep your inventory neatly organised in games like this (you can easily spend a good hour or two organising equipment over the course of a play through), but 12 hours is what most people can expect to get out of that first play through. After that there are plenty of avenues through which you can extend your playing time, although for most I imagine the game will have ended for them at the 12 hour mark because the game does lack replayability.

For those that do want to get the most out of the game the first thing to mention is that the level cap is 50, and as you’ll be at around level 30 when you first finish the game you can keep on playing to max your character out. Then there are the five different character classes I mentioned above, and you may wish to play through at least part of the game with each of these. Finally, there is online co-op. The first thing to mention about this is that it’s only two player, which certainly makes it of less worth than it would have been had it been four or more. Nonetheless, if you have a friend you want to play with then the good news is that the online co-op was completely lag free in my experience. 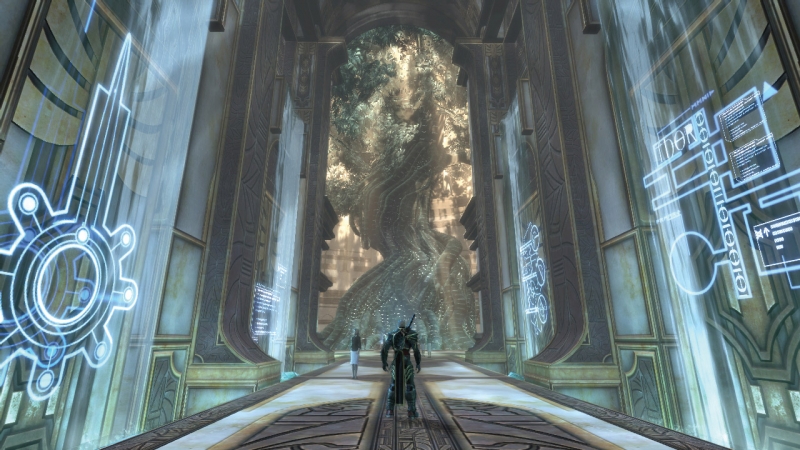 So if you like the game (and that's a big 'if') then there is a lot of potential for some really long lasting appeal here with; the different character classes, the potential for maxing out your character’s level, the online co-op, and the loot system. There are drawbacks to all of these features though; the lack of differentiation between the character classes, the need to repeat the same four levels against scaled enemies if you want to max out your character level, the limited nature of the two player co-op, and lack of community features, and a question mark over precisely why you would want to hunt for the best loot in a game like this – but it’s all there for you to access should you want to.

Too Human isn’t as bad as you may have been led to believe, but that’s not exactly resounding praise for such an anticipated title. It’s a perfectly playable, and briefly enjoyable game, but it’s all too often a fairly bland and decidedly average one as well. If you’re looking for a simple action game on your 360, with a few hack ‘n slash RPG elements thrown into the mix, then Too Human will probably serve you quite well as a rental title.