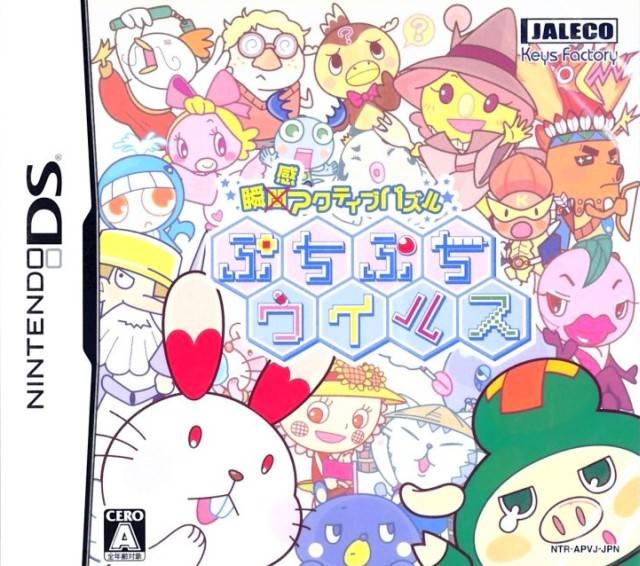 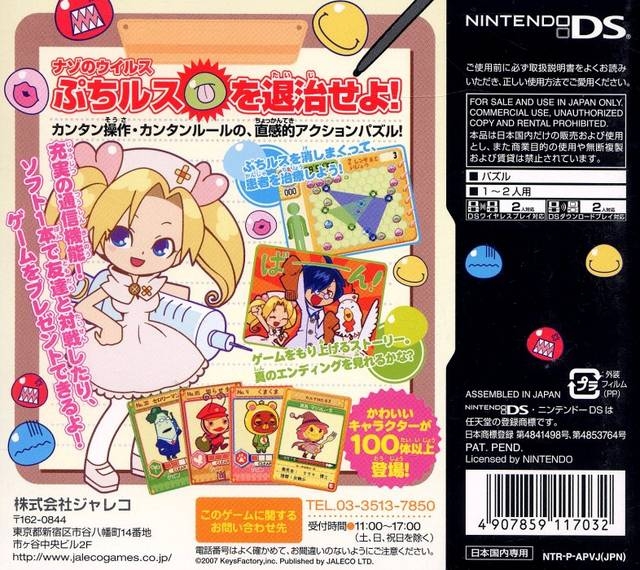 Tired of Bejeweled and Tetris? Say hello to Dr. Kevin and his virus busting adventure on the DS.

When playing puzzle games, the norm for the better part of two decades has been falling block puzzlers. These games are really fun, but no matter how you slice it if you have ever played Tetris or any of its cousins, you have pretty much played them all. Recently Bejeweled became the new standard in puzzle gaming, but companies have already “beaten that dead horse” in my opinion by making 300 clones of said game. Leave it to a publishing company like Nippon Ichi, the innovators of weird and insanely fun strategy RPGs, to bring over a quirky Jaleco puzzle game that I can’t say I’ve played anything like in a long time, if ever.

Puchi Puchi virus has a completely bizarre story involving a mild mannered doctor named Dr. Kevin. On a boring planet much like ours, there's been a horrible viral outbreak that turns people into crazy, oddly named monsters. These weird creatures seem to be reactions to the planet's mundane and boring past, but the viruses seem to have gone berserk. You will come across strange characters, such as Eelmer Dudd, a man who has turned into an Eel who likes to hunt. To help Dr. Kevin, two nurses join the fray: Honeydew (a perky blond nurse), and George (a chicken). You may notice that although George is named George, it looks female, which is quite weird and really fits the game's style of humour.

The gameplay in Puchi Puchi Virus is deceptively simple at first, but becomes very challenging as the game goes on. The input for the game is entirely stylus based, so be sure that you have honed your reaction times and hand eye coordination for this game. You will notice a large number of multicolored virus blobs on the bottom screen. To remove these bad news blobs from the play field you have to “freeze” them in place using your stylus. Once you “freeze” three of the same color you will create a triangle that, once tapped on, eliminates the viruses (or virii as the game calls them). If any other virii get caught up in the triangle, or are frozen too long, they congeal and basically turn to stone. You can remedy this by drawing another triangle around them.

As you progress you will notice a meter on the left side of the touch screen in the shape of a man. As this meter fills the Virii get deployed faster and faster. Since you die if all of the virii congeal, time is of the essence. You can slow down the meter if you create chain reactions with the virii. Basically when you draw a triangle with three green blobs, for example, and a red one is trapped inside, you can select two more red blobs away from the original group, and it will create a second triangle. Once you destroy the first triangle, any chained triangles will follow. You can chain together quite a few in a row if your reflexes are fast enough, so things can get a bit crazy. The last basic gameplay function is the medicine indicator. If you destroy 50 virii, you will be able to use a pill to clear up some congealed blobs. If you don’t use it immediately you can keep “leveling the pill up” so to say, until the pill will cleanse the entire screen of congealed blobs.

The main focus of Puchi Puchi Virus is the single player mode. In this mode, Dr. Kevin is given a group of patients and told (through an examination) how to cure them. It starts off pretty simple, as the majority of patients will require 500 points or a single 2 triangle chain. However, by the end of the game be prepared for massive amounts of points and multiple multi-chain combos. The frustration really starts to rise as the game asks you to do seemingly impossible tasks, like performing several 10 chain combos in only three minutes. Fortunately, you can literally do the levels in any order you want, meaning that if you get stuck you can always work around that level. Once levels are beaten they can also be accessed to play over and over again.

One bit of help I will issue to all would be players is this: for the levels where points need to be amassed, you can try to draw the largest triangle possible around all of the Virii blobs. By doing this, and eliminating it, you can cause a massive set of double chain reactions, which builds up points very quickly. Be warned though, this tactic is only good for the points levels, as you need to use more strategy for the more precise goals.

There are two other modes in Puchi Puchi virus for you to hone your virus busting skills. The first is a competitive two-player wireless or DS download single cart multiplayer mode. This mode is fully featured (especially multi cart play), but seems limited because of it being simply two players. Call me spoiled, but games like Puyo Pop Fever allowed eight players, and Tetris had up to four. Another stumbling block that keeps this puzzle game from being perfect in the multiplayer department is that it is strictly offline, meaning that if you don’t know anyone who wants to play with you, you’ll be stuck playing the single player game. The other mode is an endless mode, but you have to play for four hours before unlocking this. I kind of hoped that this would be available from the beginning, but it doesn't take too long to get it.

As stated before, the style of both the art and writing in Puchi Puchi Virus is off the wall and completely wacky. The game itself reminded me of the Puyo Pop series, in that you constantly ran into weird and unbelievable characters. This is especially fun with a game like this, because puzzle games don’t usually have a story at all, and if they do, they are pretty vapid (I’m looking at you Tetris Worlds). I found that even though the game gets a bit repetitive in spots, I was playing just so I could see the silly diagnosis cards and what the patients had to say once they were cured. On a graphics standpoint, Puchi Puchi Virus gets the job done, but doesn’t really have anything in it that I would call impressive. The display is simple, and almost looks like various internet based flash games around. This isn’t bad, as I was never expecting anything too elaborate from a puzzle game.

On the sound side of things, the musical composition is everything you would expect from a puzzle game, with one major theme that speeds up as tension builds and stays soft when the tension is low. Jaleco must have taken a page from Tetris, as the theme was similar to the iconic Tetris music, but at the same time it's wholly its own creation. Aside from music, the sound effects are well done, and give the player audio cues that are needed when the game gets crazy. Everything has an accompanying sound bite, whether it be the congealment of a virii blob, or a successful combo. What this helps you do is keep track of what is going on even though you sometimes can’t watch the whole screen at all times.

Puchi Puchi Virus is a great game, and a needed addition to any puzzle gamer’s library. There are a few problems, like lack of online play or wealth of game modes, but it makes up for this in style. Whether it is the quirky art style or the funny writing, you will fall in love with this upbeat romp of puzzle goodness. Priced at a budget tag, this game will only set you back twenty bucks, which really offsets any of the problems I have with the multiplayer. Bottom line is this: if you like Puzzle games, and are tired of the same old Bejeweled clones that everyone makes, take Puchi Puchi Virus out for a spin.