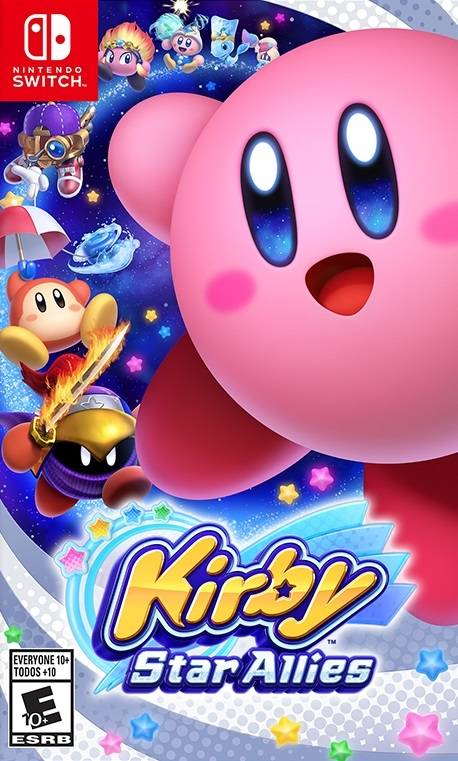 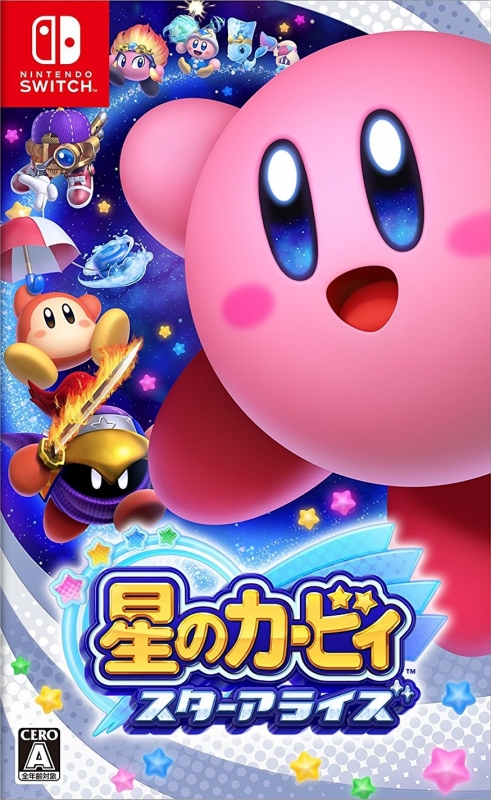 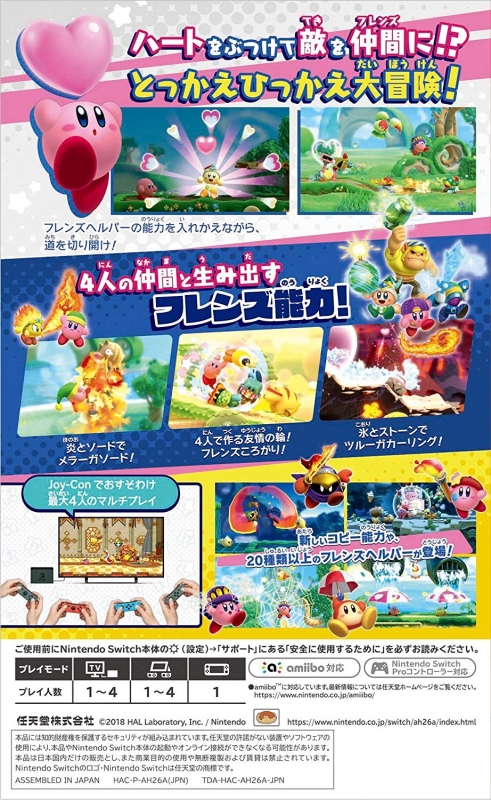 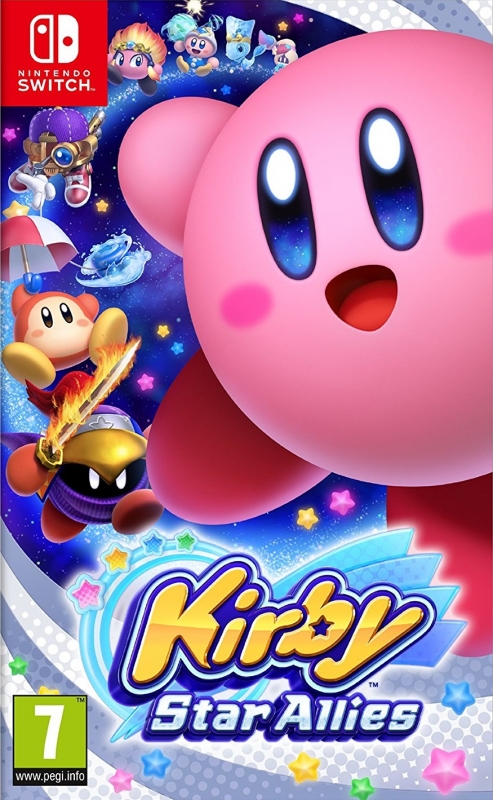 I’ll preface this review by saying that is quite challenging to write one of a title like Kirby Star Allies, in part due to the big amounts of nostalgia injected in a classy, elegant and respectful way that is known of the series, only in this case, presented in higher quantities than previous games. As a big fan of the franchise and one that I have grown up with for most of my life, is probably a safe thing for me to say that I could be quite biased towards certain qualities of the latest entry in the Kirby series. Nevertheless I firmly believe, even without all this nostalgia, what HAL Laboratories presents us in Star Allies, is without a doubt the finest entry in over 25 years of games of the pink puff warrior.

Let’s start with the story, which as is tradition with the series, is deceptively simple, ever since Kirby’s Adventure on the NES, the mainline titles are all about betraying players expectations, either to newcomers or veterans of the series, ever refining the surprise factor of its stories, like going from dark villains to tragic villains and even comebacks of dormant antagonists or subversions of recurrent characters, all of this building a continuous lore that has only gotten even more presence as of the latest games with recurrent plot elements in the case of items of importance in past games and flavor text in the pause menu of the multiple boss fights. Star Allies story without spoiling too much, takes Kirby to stop the menace of dark hearts that infect their friends or enemies due to the failed chanting of a cult of mages trying to bring back their lord.

What makes the story of Star Allies stand out the most is its pacing and structure, for the first time in a while, the level flow is not restricted to the planet Popstar in which Kirby lives, but it takes them across ever increasing scopes of scenery, from Dreamland all the way to outer space, giving a more epic feel to the adventure and keeping the level tropes and design consistently fresh.

The presentation is quite superb, as the first mainline title in HD, the makeover from the 3DS games is quite noticeable, there is a lot of really good lightning and detail to the world and models, some really breathtaking sunsets in Castle Dedede or the fact that you can see the knits in materials like Dedede’s clothes, Sword Kirby’s hat, the costumes of the Jambastion Mages, just a lot of really good amount of care put into the game’s visuals, unfortunately the framerate can take a hit due to that at times, the game mostly runs at 30 fps, with some noticeable lag in the more intense scenes like the sunset of Dedede’s Castle and a particular fight in one of the game modes, the lag doesn’t happen often, very few places where it does, but the places where it does lag, it lags consistently, there is really no evading that.

The soundtrack is something else, on top of the great amount of original compositions, like the very fast paced, Ace Attorney like theme of the Jambastion Infiltration or the always amazing rendition of Dedede’s theme. And a great amount of older tracks, these being either just lifted from those games or fully remixed, sprinkled through the game’s extra stages and modes. The big highlight for both original and remixed music are the Suite of the Star Conquering Traveler (final boss track) and Heroes in Another Dimension stage track respectively, the first an ambitious, tremendous 12 minutes composition divided across 5 movements, very much like a Final Fantasy's Dancing Mad equivalent and the later a full on medley of the last level themes of the last 3 mainline titles (Return to Dreamland, Triple Deluxe and Planet Robobot) and the Fountain of Dreams of Kirby’s Adventure.

Onto the gameplay, Kirby is a standard 2D platformer with some beat em up elements with its transformations and multiple characters that have a good variety of moves to perform, they can flutter for as much time as you need to, Kirby can swallow enemies for abilities, all the usual fare. A new element added to the game is elemental based add-ons to other abilities; for example, adding fire abilities to the sword or plasma to the staff, is a simple mechanic, but really effective, used for most of the puzzle solving of the game and also some strategic advantages for some boss fights, like say, one boss has a water gun that shoot a stream, if you have the spark ability or a spark add-on to your weapon, you can electrocute the boss, in another instance, you can overcharge an electric boss and paralyze her for a bit with spark as well. A lot of small details can be found like that across multiple boss fights.

The game flow and level design of Star Allies is overall pretty good, levels never go on for too long and they are simple to navigate with some tad trickier sections for extra goodies like puzzle pieces, the overall difficulty of the main game is low, accessible for anyone to complete without much hassle, regardless if you are playing with friends or solo, the AI is pretty damn good at following what you want to do in the normal platforming areas, boss fights and puzzle solving. Boss fights as usual are a highlight in Kirby, lot of fun bosses that you can master with a good variety of moves and patterns.

As far as completion and extra modes, there is plenty to do in Star Allies, like Return to Dreamland, you have 2 minigames you can play solo or with friends, they are only small distractions in the grand scheme of things, a batting game about timing and a log cutting game about reflexes. There are also plenty of Celebration Pictures that you complete by collecting puzzle pieces in various modes, all from different artists, celebrating multiple titles in the series. You also get a beefy sort of time attack mode for all of Kirby’s friends in Guest Star Mode with rearranged level design and a new end game boss. And a boss rush mode in the Ultimate Choice, where you can pick a difficulty and go through a set number of bosses that increase with the level of difficulty, until doing every boss fight in the game.

Star Allies got some free updates with more content for Guest Star Mode, characters from all the mainline titles, from the animal buddies all the way up to Susie, all of them with new level arrangements and new areas based on iconic levels of each of their respective titles and with all new remixes.

They also added an entirely new extra mode, Heroes in Another Dimension, a very challenging mode where you use all the dream friends to solve the game’s hardest puzzles to collect hearts and change the fate of certain characters in the end. Here on top of the new levels you get harder versions of some of the bosses. This in itself also adds a new difficulty in the Ultimate Choice and a lot more Celebration Pictures to complete. Overall a really good package that got even more value over time.

When Kirby Star Allies first came out, it was already an excellent game worthy of the consistent greatness of the series and a game that matched the quality of what was my previous favorite title; with all the updates it got, I’ll say it became a legendary game and the finest adventure of Kirby. An epic tale, a love letter for the series, and a grand finale for the gameplay style we have gotten since Return to Dreamland. A magnificent experience for Kirby’s first Switch title.