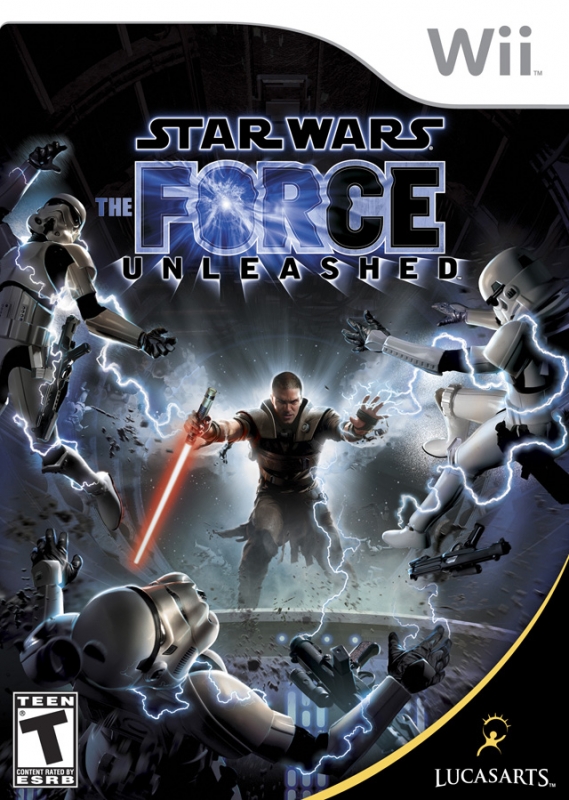 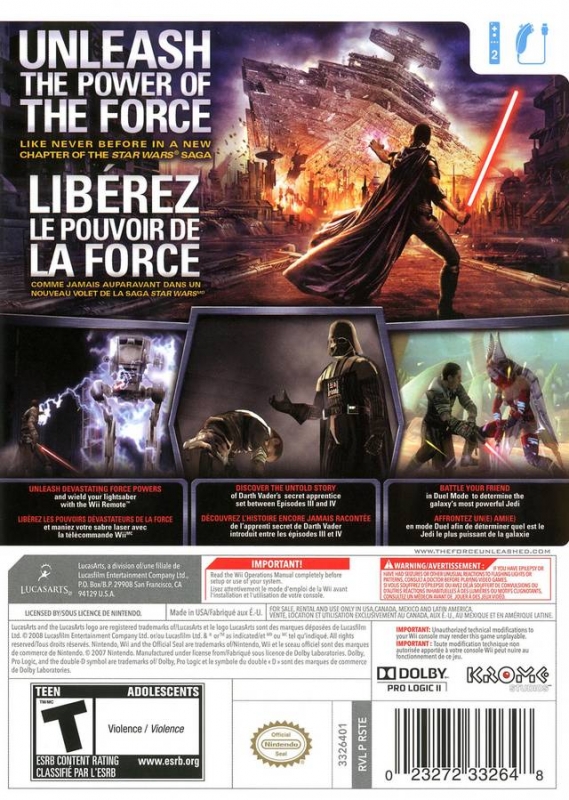 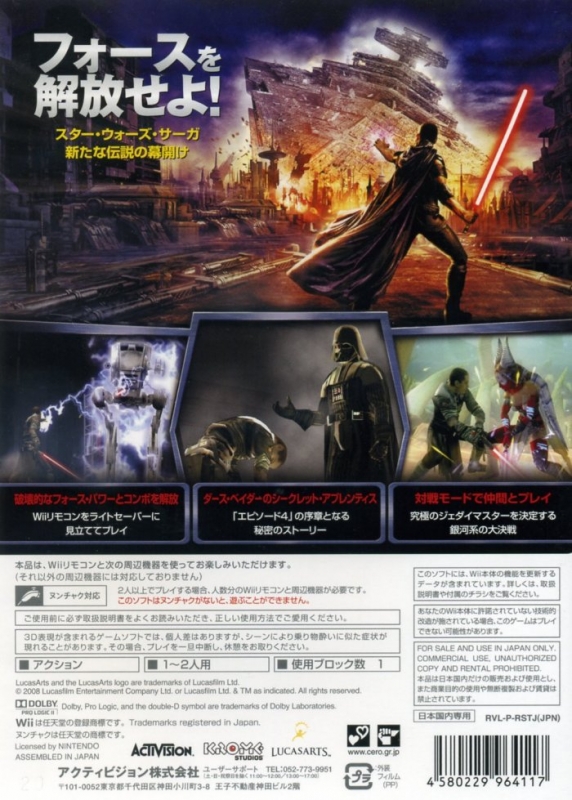 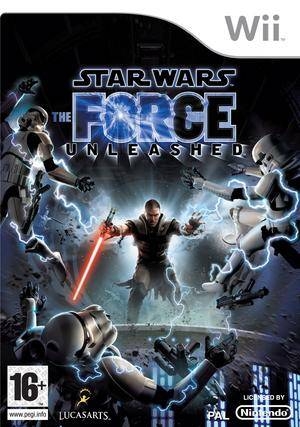 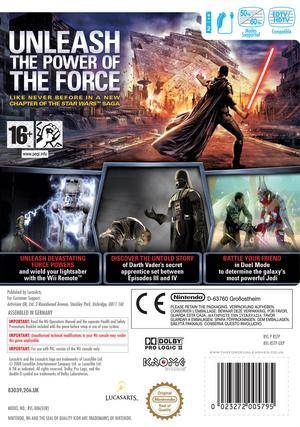 I find it funny that when George Lucas has minimal impact on something in a Star Wars product, I seem to like it more.

"A long time ago in a galaxy far, far away..."  Words that I have seen many times in many ways.  These are words, that when grouped together, spell out one thing – I am playing or watching something to do with Star Wars.  No matter how great the original movies were I am under the impression that most Star Wars extended universe stuff, like the games, are rather hit or miss.  Some try to take the franchise in crazy directions for no real reason at all, and others seem like a vague husk with the simplest understanding of the franchise.  When I popped Star Wars: the Force Unleashed into my Wii, I was shocked – I was playing a fairly good Star Wars game.

The Story follows a seemingly unnamed man called 'Starkiller' forced to work as a Sith secret apprentice since childhood, for Darth Vader.  This all takes place in the period between Episodes III and IV, where Vader is trying to wipe the Jedi from existence.  You are teamed with Proxy, a droid used for holographic projections, and Juno Eclipse, the pilot of your ship the Rogue Shadow.  The majority of the game is spent being sent on various missions to kill the remaining Jedi as training for your ultimate goal: assassinating the Emperor to place Vader in charge.  From here the story takes many twists and turns, but stays very good.

In fact, the story was so surprisingly good that I liked it better than a few of the prequel films, and most of the stories to the Clone Wars stuff.  It really seems the writers tapped into what made Star Wars feel like Star Wars, which was nice.  It doesn’t come without its faults, as the story can be slightly predictable and, just like the prequels, you know exactly how it will end. This great story, coupled with the game's sense of freedom and power that you wield makes for a very satisfying third person brawler.

Along with the writing comes generally good sound presentation, as the music in the game seems to be just like the music found in the films.  There are slight remixes of John Williams’ famous music including versions of the now iconic Imperial March.  This old material is in addition to material created specifically for The Force Unleashed.  According to the booklet, the music, sound effects and all other audio features where mixed by Skywalker Sound to add to the legitimacy of the end product.  The game also features fairly good voice acting including actors from the movies themselves reprising their roles.  Other roles like Darth Vader and Emperor Palpatine are played by talented people who have pulled off the characters' voices almost perfectly.  There are no moments with terrible dialog or wooden acting that have plagued some of the latest Star Wars programming.

The controls in the Force Unleashed are pretty well mapped and responsive.  Your force powers like force hold and force lightning and general movement are all done with the nunchuck.  For instance to move a table across the room you would hold the 'Z' button while locked onto the table, and then move it around using the thumb stick.  This is very easy to do and also very intuitive.  The force lightning is just as easy, as you just have to tap and hold  the 'C' button to perform it, or double tap the 'C' button to do the stronger version you get a bit later.  You jump and do all of your light saber attacks using the Wiimote itself, and can choose to swing the Wiimote as a lightsaber or press a button.  Either method yields the same result.  Unfortunately the lightsaber controls are simply the same as the button press, and the Force Unleashed does not recognize 1:1 control or even swing based control for that matter.  This was not a letdown to me as third person action games like this get pretty hectic and having 1:1 sword control would have torn your arms up.

The further you progress through the game the more attacks you will be able to use, and the more complex you controls soon become.  There are combos, jump slashes, and many other things that can make this game one of the most waggle intensive games on the Wii.  Although I never felt like it was too much like some earlier Wii games.  In fact I think the controls are nearly perfect for this type of game.

On the graphical front, the Force Unleashed gets the job done, but never really excels.  Some things look really nice, like the majority of the in-game character models, and the particle and lighting effects.  But there are other times where you could be just as easily playing an original X-box game.  There are also some great scenes, like the famous one where Starkiller rips a full on Star Destroyer out of the sky and crashes it to the ground.  When rendered with the in-game engine, a lot of the detail and visual impact is lost, but that could be because I have seen the commercial so many times.

The gameplay for the Force Unleashed is fun and never gets old.  The fact is that you literally have so many ways to kill any given enemy; you never get tired of experimentation.  I found myself trying various ways to use the choke hold, dropping enemies into fire, dropping them out of glass windows, and hurling them into each other.  In most games like this you can get really tired of just button mashing, but the force unleashed on the Wii mixed it up a lot, and made you have to think about what you were going to do.

When picking up objects or ripping panels off of walls, there is a guidance system that makes the object you are focused on glow blue.  This indicator tells you that if you press 'Z' you will maneuver only that object.  There are tons of things to move around, but not so much that the blue light is useless.  Once ripped up, these objects have good physics, and react to what you do to them well.  For instance, if you toss it at a wall it may clip the wall sending it spinning or bouncing around.  The pieces also remain on the ground rather than disappearing after use, meaning that you can always go back and use it again.

The only gameplay feature that I was completely annoyed by was the boss variety.  Towards the beginning of the game you wander into the loading dock of an AT-ST (the walking tank that walks like a chicken in Return of the Jedi) and had to single handedly take it out with my Sith Powers.  This was an awesome fight scene that concluded with a series of on screen action prompts that led to me balling said AT-ST up like a Kleenex.  I was really impressed by both the design of the boss battle and the way it ended.  Unfortunately in the course of the game you have to do the exact same boss battle three times.  This happens with other bosses like Rancors as well.  This design choice makes these battles monotonous and lose all impact altogether.  The rest of the boss battles are pretty memorable and make you feel like a genuine Jedi master.  The majority of these include duels with other Jedi that involve fencing with lightsabers and hurling huge objects at each other.

The Wii version of the Force Unleashed has another mode to play if you are done with the campaign itself, in the Duel Mode.  Duel Mode is just like a mini fighting game with around 30 characters, although 10 of them are Starkiller in different costumes. When you have a buddy around these duels are really fun, but are only available for two players.  That’s right, Duel Mode has no enemy A.I. for single players, it’s only a two person game.  This seems like an oversight and makes Duel Mode seem like an afterthought, no matter how fun it is.

In conclusion, the Force Unleashed is a good game, but a few nagging presentation issues keep the game from being truly great.  The game itself features solid controls and a storyline that makes you feel just like a Jedi.  The Wii version of the game lasts just over 10 hours, containing a few more levels (The Jedi Temple levels are paid DLC on other systems, free on the Wii) than its HD counterparts.  Along with this, the game also employs a 'New game +'-like feature and hidden unlockables like customizable parts for your lightsaber and or concept art (present in all versions).  This coupled with a competent yet flawed Duel Mode, makes the Force Unleashed great value for money if you can get past its faults.