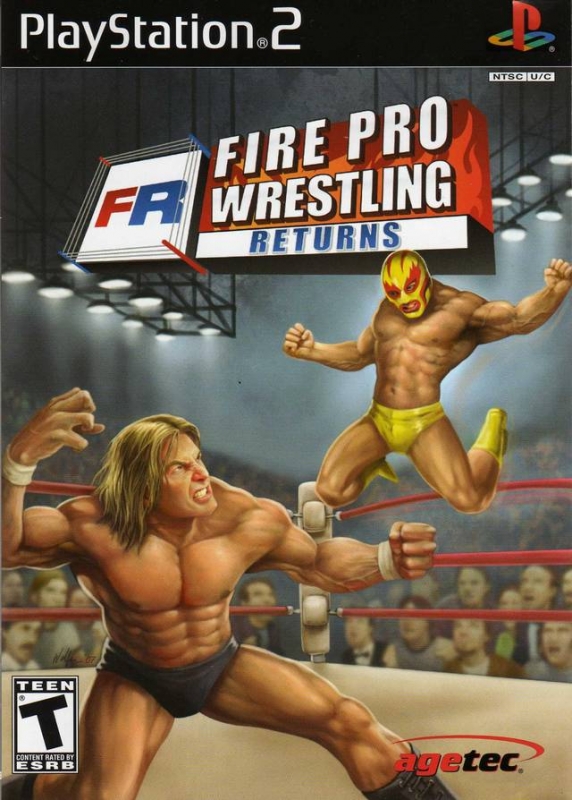 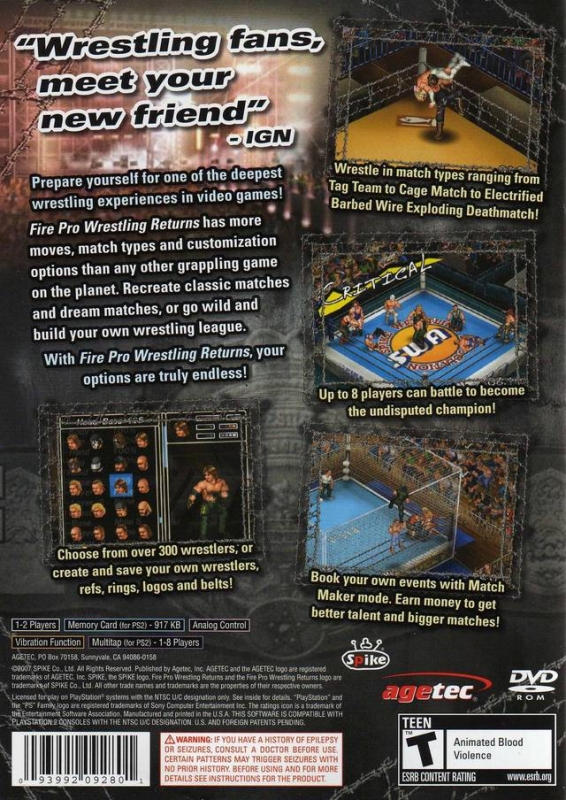 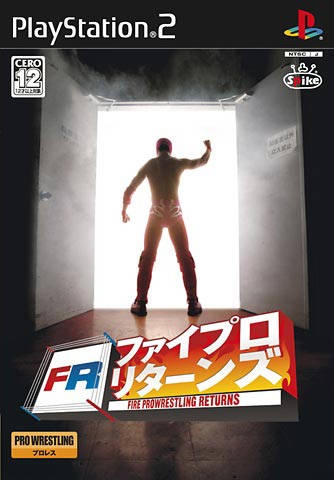 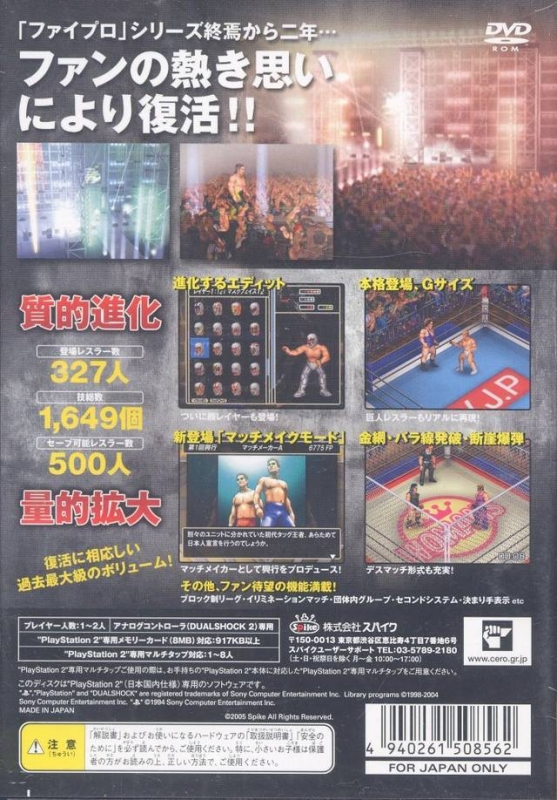 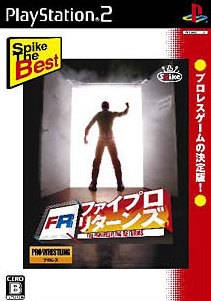 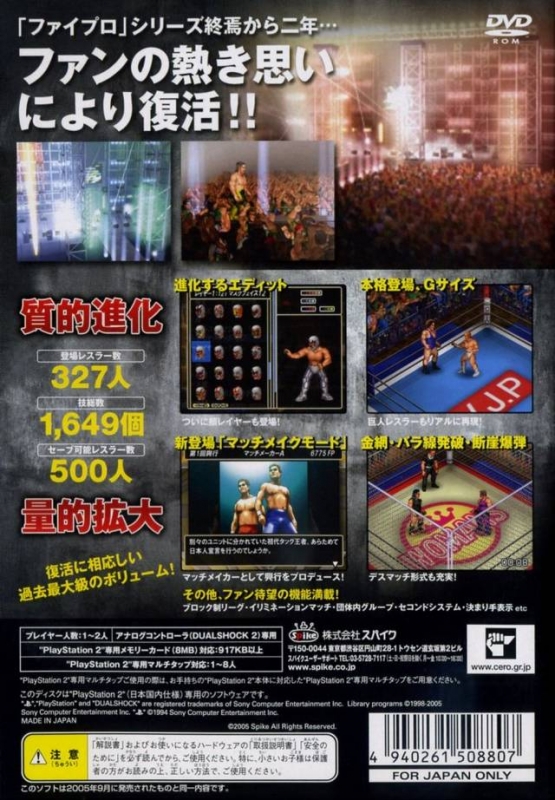 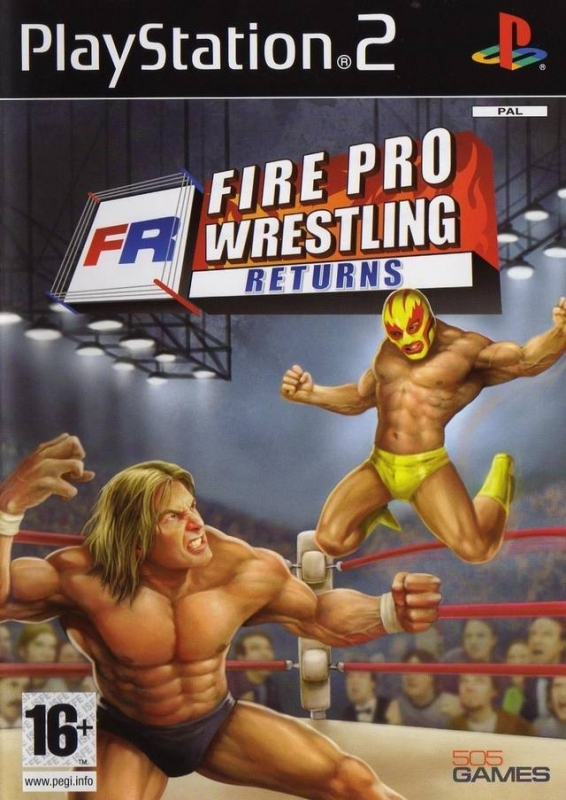 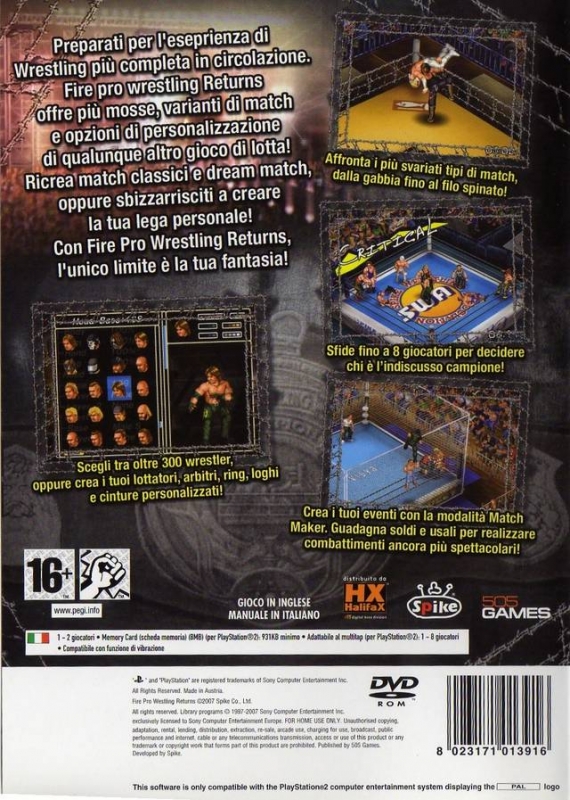 From the foundation of an “old-school” wrestling game, Fire Pro has all of the features that you expect in the big WWE games and more.

As I have stated in my numerous reviews for the genre, I am an avid professional wrestling fan and love to try out any game that I can get my hands on. I remember enjoying a series of Gameboy Advance games called Fire Pro Wrestling a few years back and jumped at the chance to try out a console game in the series. The main draw for me was always the inherent “ballsiness” of the series. In a previous game you could literally create any wrestler from Hulk Hogan to The Undertaker simply by changing the colors of their seemingly “made-up” original wrestlers. In no time at all you could literally have a super roster of wrestlers from a cross section of various federations. Fire Pro Wrestling Returns for the Playstation 2 has all of this and more.

With the recent retro game explosion making a lot of developers look back at what made gaming what it is today, it's pretty cool to see an “old school” wrestling game. Some may write of the graphics immediately as they aren’t too far removed from really good SNES graphics, but the game isn’t trying to be a WWE Smackdown Versus Raw game. Rather, it’s trying to improve on an already solid formula that has worked for years. Granted the younger gamers may have bleeding eyes trying to play it, but dare I say that the game may not be for them. This is a niche game for either huge wrestling fans or retro gamers, and that’s pretty much it.

Fire Pro Wrestling Returns contains the single largest roster of any wrestling game I have ever seen. Once you begin there are 327 pre-programmed characters including Terry Funk, Andre the Giant, A.J. Styles, and Sabu as well as almost any current and past Japanese wrestler that you can think of. These characters are conveniently hidden away by fake names to hide the fact that they are real people. This is done so that they can make these games full of wrestlers to aid in the creation of dream matches without getting sued. For example, once you boot up the game, a character like Terry Funk is initially named “Kerry Texan”. After a simple edit, you have a fully renamed character. The online community has compiled lists at various places to aid with this conversion, and albeit not necessary, makes the game that much more fun. After these characters are dealt with, you have room for an additional 500 characters, making this roster clock in at around 800+ fully maxed. You can look online for folks that have created new logos, belts, referees, etc for UFC, WWE and TNA, so through various means you can add them to your game. This game has probably the most customizable experience this side of a pro wrestling simulator with belt creation, logo creation, wrestlers, referees, and pretty much anything else including nearly every wrestling move you can imagine; the possibilities are mind boggling. The logo creation was simply crazy as you have a pixel-by-pixel drawing tool that isn't hard to use, but you really have to have some talent to pull off some of the logos.

Aside from the creation aspect of the game, the game contains many modes including tournaments, leagues, exhibition matches, and a promoter mode that is sort of like the general manager mode of the recent WWE games. The rest of the modes are a no frills affair with no story mode to speak of which is understandable for the type of wrestling game this is. The match types are varied and include many staples of Japanese wrestling, including cage matches, exploding ring matches, barbed wire death matches, and even over-the-rope battle royals. There are no WWE or TNA style gimmick matches such as ladder matches, TLC, Hell in a Cell, Elimination Chamber, or Casket matches, but that is because those match types are not relevant in Japanese wrestling aside from a few scattered promotions.

Once you actually set the match up using the plethora of options available and pick the characters, the fun really begins. While seemingly easy the fighting system in Fire Pro is incredibly deep. While facing an opponent you have the ability to punch, kick, run, and block using the face buttons and various versions of all actions using a combination of face buttons and directional buttons. To initiate a lock-up all you have to do is walk over to another grappler using the D-pad and wait for a noise to trigger, and the first person to do a move usually pulls it off but there are counters in place as well. Once grappled, you have the choice of the four face buttons for moves, and each button also has four variations to it. As you can see, the move-set for each character is mind boggling, especially since you have to take into account finishers, rope moves, signature moves, double team moves and so on.

This grappling system seems rough at first, but once mastered it rivals anything in the recent 3D wrestling games due to its simplicity alone. It harkens back to a day when wrestling games weren’t full of crazy convoluted control schemes and various gauges. Speaking of unnecessary bars and gauges, Fire Pro has none. The only items on the screen are your match and a timer. You know how you are doing simply based on visual cues alone. For example, in a death match your character becomes fatigued really fast, which makes the time between moves longer and longer. As you take more damage, you will notice a lot of blood starting to appear on your character and notice his inability to move. On the flip side, if you can start stringing together moves, toss in a taunt or two, and attempt harder moves, you can tell that the momentum is shifting in your favor at times. Since the animations in the above example are really good, there is no need for a stamina bar, a health bar, or any other type of bar you can think of.

The graphics in Fire Pro are really good for a 2-D sprite based game and move fairly well. The sprites have tons of animations to go through, and no corners were cut. What you see in 3-D wrestling games is fully replicated here. Sometimes the movements seem kind of jerky, but that really comes with the 2-D territory. All of the characters are finely detailed down to the minutest facial feature and all are full of vibrant colors. All in all, for a 2–D game the graphics are well above par. The sound however has not aged well, and I really wish it would not have gotten the retro treatment. Aside from the occasional voice clips and such that are well done, Fire Pro is full of annoying and repetitive music. Even the wrestler theme music seems B-class for some reason.

The value of this game can be summed up as thus: imagine a wrestling game with over 300 characters from 15 different federations and the most in-depth move set and gameplay seen in a wrestling game for only $15.00. That is exactly what we are talking about in this game. This game is meant for people who like old styled games or have an interest in Japanese wrestling. If these criteria are met, there really is no better wrestling game than Fire Pro. There are also some multiplayer options in place so you and your buddies can duke it out. Aside from the two player, there can be eight wrestlers in a match at once, so battle royals can be pretty fun. Sadly, as with many PS2 games, there is no online.

Long since imported due to being “too Japanese”, a chance was taken in bringing the long running Fire Pro Wrestling series to our shores. While not for everyone, and not perfect by any means, this game is a must for wrestling fans. If you look past the game's flaws (like the horrendous music), a lot of fun can be had, especially if you are into the create-a-whatever options found in the game. As of right now, I’m hooked on Fire Pro Wrestling Returns for the PS2, and you should be as well.