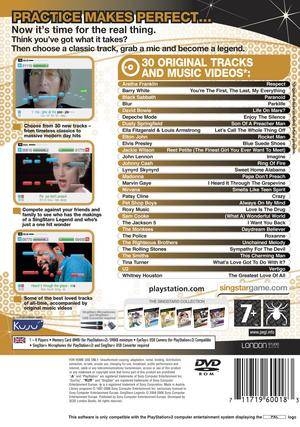 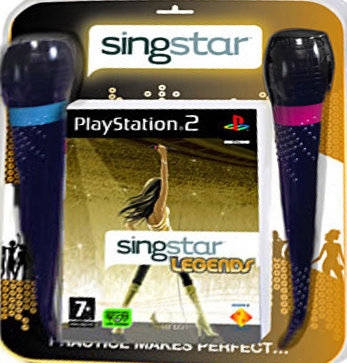 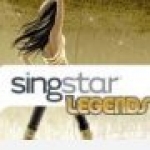 There is a good possibility that many of you already know all about the SingStar franchise. Even if you have never played one of the games, you can take an educated guess based on the title that this series of video games encourages you to sing like a star.

SingStar Legends was released just in time for Christmas and you'll be happy to discover that it includes all of your favorite legendary songs from yesterday and today. I have played the US version extensively and it is important to note that the European version, which was released two years ago, includes a totally different track list (although it looks just as good). On the American version, you'll find hits from The Police, Tina Turner, Ray Charles, John Lennon, The Grateful Dead, and the Jackson Five. The song selection is really a great one. Don’t expect to have heard of half the songs unless you are over the age of 20 though.

The game modes and features are really nothing new and don't include anything that has not been in the previous 6 installments of SingStar on the PS2. Two SingStar microphones are required to play the game. Once plugged in, players choose from a myriad of game modes. Most all focus on multiplayer, including duet mode and competitive mode. Another mode is called "Pass the Mic" which entails players dividing into teams and battling it out in a singing competition of epic proportions. Once a song starts playing, the music video will be visible in the background. The music video is standard quality (the PS2 does not support high definition video). You will be judged on pitch only. The game is not intelligent enough to detect the correct lyrics.

The game itself plays pretty well. You can choose from Easy, Medium, and Hard difficulties. Easy mode can be challenging at times if you don't have a perfectly pitched voice. The microphones are very sensitive. Compared to the Rock Band and Guitar Hero games, the SingStar microphone is much more receptive and sensitive. Holding a note turned out to be much more of a challenge on the Medium and Hard modes than I thought it would be. A feature I really enjoyed was the ability to change the volume of your own voice on the television. If you don't like the sound of your voice or are too embarrassed to belt out Barry White in front of your best friends, you can turn the volume of your voice down.

I would normally complain that Sony has not learned from the mistakes of past SingStar games, but I honestly think people know what they are getting into now when they buy a SingStar game on the PS2. It’s basically the same shell with a different track list, in the same way that Rock Band track pack Volume 1 and Volume 2 are additions to the Rock Band track list. There is no taking away lead vocal like in Karaoke Revolution, nor are there any new modes. The menu screens are very bland and unoriginal. Despite the minor issues I have with the game, SingStar is all about the music and SingStar Legends allows you to have a great time with friends (and gets increasingly more fun when you include alcohol). At a retail price of $30 and a song list of 30 songs, you are paying around $1 per song, which is pretty reasonable. If you are a Singstar fan, I would definitely pick up this title. Otherwise, there really isn’t anything too ground breaking here.